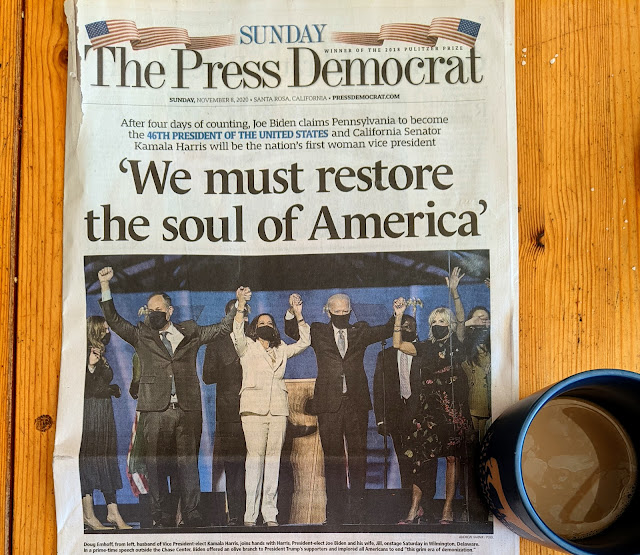 This week had such a good start with finally a positive headline in our local paper. I was getting sick of all the negative news about the election and of course the virus. It was such a joy to see a message that includes hope. However, the bahavior not only of the sitting president but also of many Republican leaders following the weekend is just shameful and embarrassing. So much damage has been done to our country and our democracy. I am not sure we will fully recover from this.

Throughout the week I felt how much the days after the election, the uncertainty had exhausted me. I was tired at my work at the high school library, and while I still got a lot done it was slower progress than usual. After two more days in the coming week I'm taking a break - I worked a lot of extra hours at the beginning of the school that have not been paid and therefore I will "balance" them out and not return to work until the second week of December. 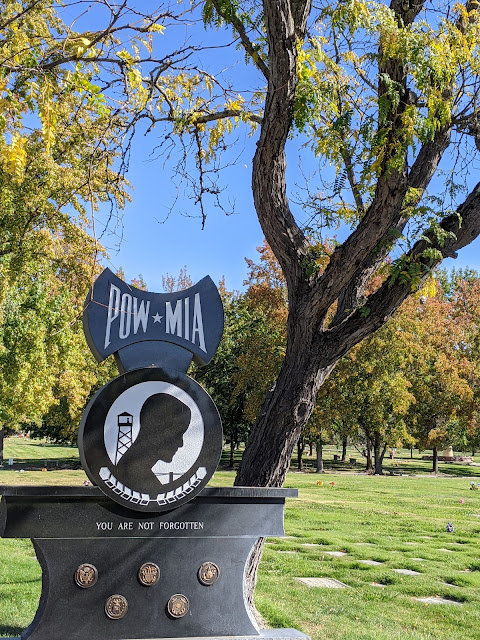 Wednesday was Veteran's Day and this year I found it even more important to observe it than the years before after our military service people had been discredited by their own commander-in-chief. I was thinking of my uncle (my mother's younger brother) who spent ten years in Soviet war prisoner camps after World War II. He was neither a sucker nor a loser and I have the highest respect for him (yes, he is still around, in this nineties now).

Wednesday was also St Martin Day in Germany when the children go out in the street in the evening carrying their lanterns and singing the traditional songs. (I once wrote about this German tradition here) I remember when we were walking along the old alleys in Tübingen with Kaefer  and her lantern when she was two years old. 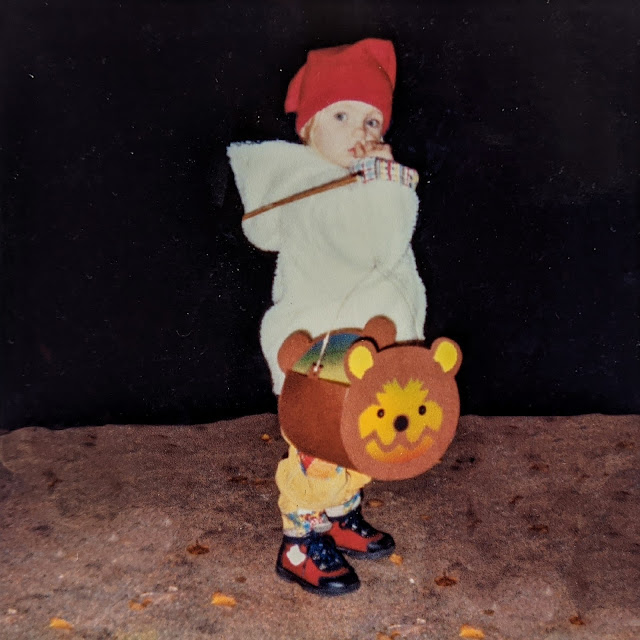 She is living in Munich now and she texted me that she saw several families walking with their children, carrying the lanterns and singing songs. Unfortunately she hadn't taken any photos.

We had some pretty frosty nights this week, the first in the season. It was also the same time that my neighbor had left for a week. She had a house and cat sitter who was putting out food for the cats, but Kibeau didn't seem to be very fond of him and spent even more time than usual in my garden. I was worried since it was so cold (we can't have him in the house because of the Geek's severe allergies), so I made a box for him with a warm fleece blanket inside and a blanket tuck around it. In the nights I also put a few pillows up against it to keep off the worst of the cold. Kibeau immediately climbed into the box after I had set it up and spent every night there, sleeping late into the mornings. 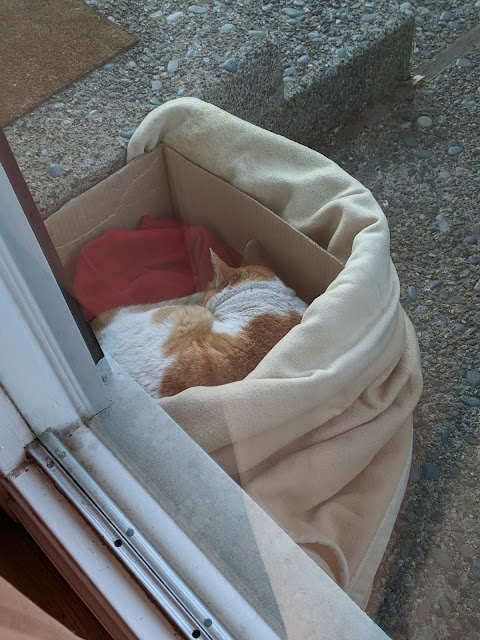 The fall colors are wonderful right now. The Chinese Pistache that I planted a few years ago is spectacular this year - I think it's getting prettier each year. It's almost glowing against the backdrop of the dark redwoods. 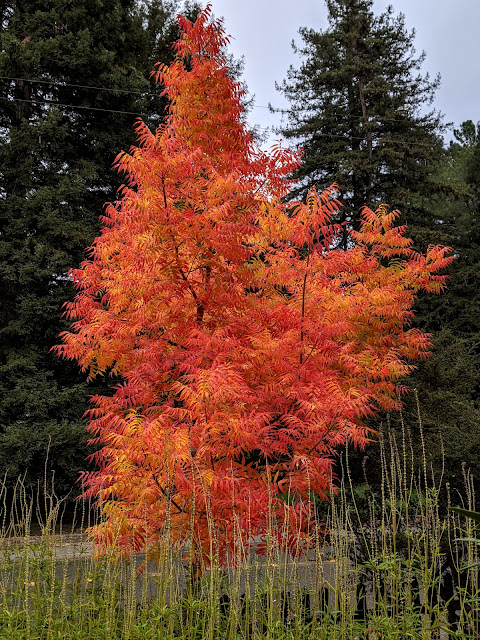 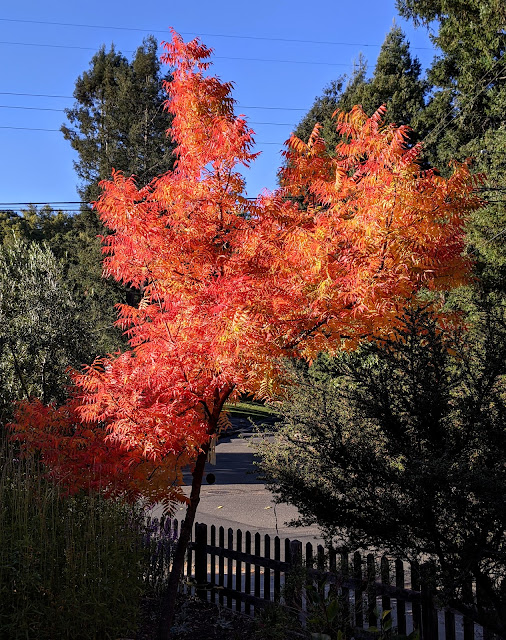 Did I tell you that I am teaching a creative writing class at the German School? It's an "elective" in addition to our regular classes. It has been on my mind for a long time to offer something like this, and since I know how challenging it is to write in a foreign language I thought it might be interesting to try it. So I did - and it seems that my students love it. This week they asked me whether I'm offering it again next semester and even though it is a LOT of work I'm seriously considering it. I enjoy it tremendously! I do all the work that my students do as well which means that I have been writing a lot recently. I am so happy about it. I have always enjoyed writing and started writing creatively when I was around ten years old. Growing older I took several creative writing classes - it is a really "old" love of mine. Who would have thought that I would ever teach creative writing classes myself?
I leave you today with an image of my Roger's Red - a California native vine that doesn't have "red" in its name for nothing. It's winding up the windmill my husband bought for me several years ago when we were still living in the Brookdale house. 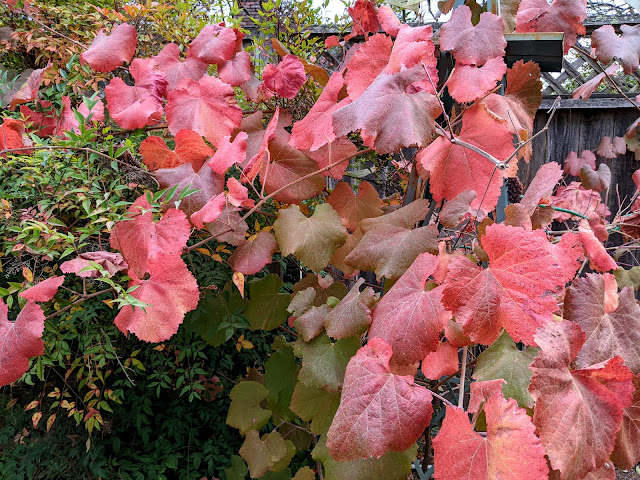 I share your fears for the USA and have been watching in fear and in horror.
Thank you so much for also showing us beauty. Lots of beauty.
I am very certain that your students learn a LOT from your course (and cannot imagine how difficult it would be to write in a language not my own).

I'm with you about the good election news. And the bad news about the childishness of the president and the republicans. I guess if they can't call the election then some of those senators can't say they won reelection too. I liked reading about St. Martin's Day, a new holiday for me. I bet it is wonderful to see all the children out. Hope all is well.

Your tree is spectacular. I have loved the election results and been dismayed by the lack of cooperation (being nice here) regarding the transition. I didn't know about St. Martin's day either. And I love your kitty bed. Do you get a lot of snow and rain where he sleeps outside? Blogger Vivian Swift built quite a contraption for her outdoor boy Steve using plexi so he'd be covered. Take care and stay well.

I guess that no one should be surprised at what "He" is doing after 4 years of so much damage to our democracy, thank goodness come January he will be gone, wish that was also the case with some members of the senate.

Love all of your photos.

Carola, I'm so sorry your uncle was in a Soviet war prisoner camp for 10 years, that's terrible. Sometimes we think about our relatives and realize all they went through during their life. St. Martin Day sounds like a nice tradition in Germany. Kaefer looks so cute in this photo. What a treasured photo that is with special memories. I hope she is doing well living in Munich. The Fall trees are beautiful around your neck of the woods. That's great that you are teaching a creative writing class. I love to write, but I could get some tips from you. : )

Wonderful colours in the trees, so nice to see your photographs.
Stay safe and well.