Days of the Red Sun 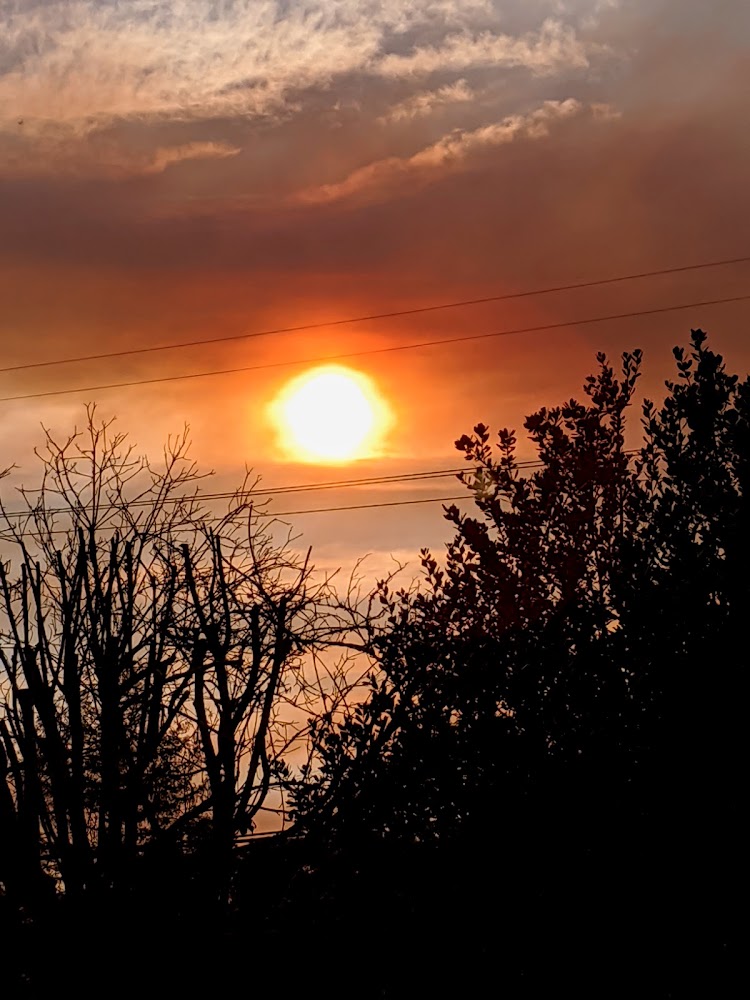 When the sun looks like this it is a pretty sight, but it is not a good sign at all. We call this sun either the Red Sun or the Fire Sun. The intense color results from heavy smoke in the air, and the smoke, of course, originates from wildfires.

Last Sunday and Monday we had a series of bizzare thunderstorms, or should I say lightning storms since we only received a minimum of rain that didn't help much. These storms happened amid triple-digit temperatures, our first serious heatwave this year. The last time it had rained was back in May, so everything has been extremely dry.

We were worried all through these two days and sure enough soon the first warnings about wildfires came in. These were in Napa County which is our neighboring county. Most of these fires occurred along Highway 128, the route I usually took when I drove to Davis. But then we heard that there was a fire in the Austin Creek area in our county (the Walbridge Fire) - a heavily forested area with narrow and winding roads which makes evacuation difficult and dangerous. This area hasn't burned for decades and has enough fuel to feed a huge fire. Fire also produces its own winds and even fire tornadoes that makes the already bad situation even worse and less manageable. Evacuation orders were put in place as well as rather extended evacuation warning zones to get people ready to go if the need arises.

Shortly after that another fire north of Jenner at the coast was spotted (the Meyers Fire). All of these fires were started by lightning strikes and added to the already high amount of wildfires we had all over California before that. 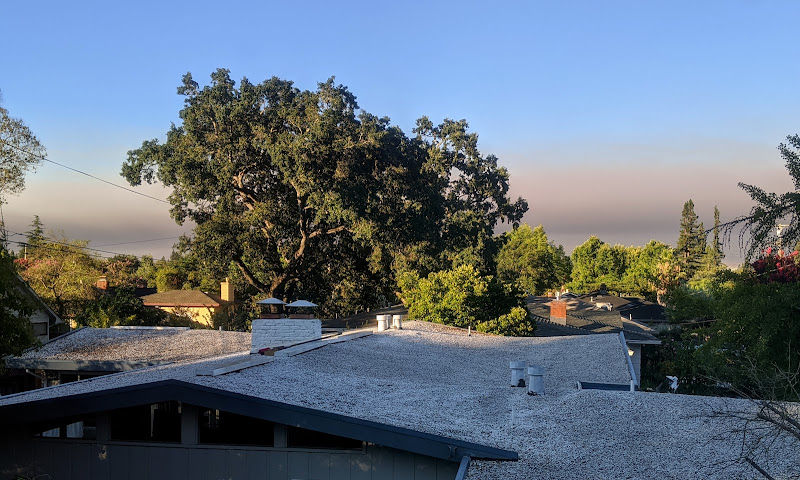 Nixle alerts were pouring in, but thankfully the night was quiet with no new evacuation orders. Yesterday our view from the second story of our house looked like this - you can see a wall of smoke moving in, and soon after that the sun disappeared, the light became an eerie yellowish and the air quality was horrible. We stayed inside, shut down the house, had the air filters running and trying to make the best out of this situation. Even if you try to stay calm and reasonable, there is so much anxiety because we had experienced the October 2017 fires and know how quickly a dangerous situation can become a disaster. I certainly don't want to see anything like this again: 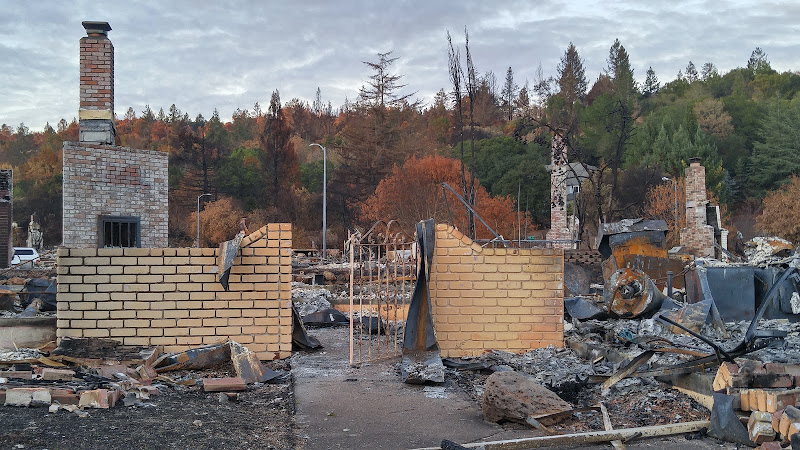 This morning the air quality had improved, but not for very long. It is horrible again. I really have become hateful of the smell of wildfire smoke. It triggers bad memories for everyone here.

The mandatory evacuation zone was extended this morning. The people in the area that used to be under evacuation warning now have to leave their homes without knowing whether they will still be there when they are allowed to return. There are evacuation centers available, but other than in 2017 when people were sheltered in big buildings, these centers now are mainly huge parking lots so that people can isolate in their cars.  COVID-19 makes everything so much more difficult.

If we had to evacuate, where would we go? I have no idea. 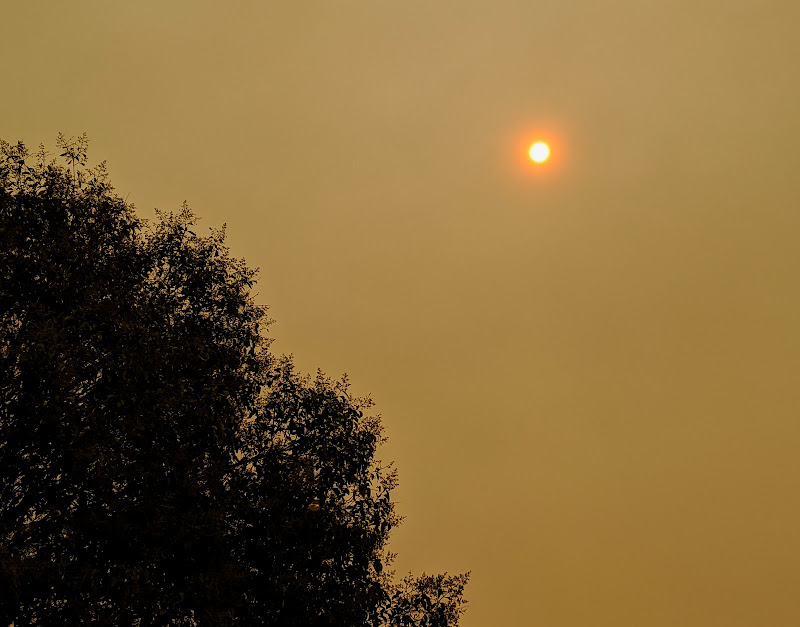 Oh Carola.
I am all too familiar with the beauty and the horror of those skies. And yes, that scent too. Horrifying. Terrifying.
I am holding you all firmly in my heart and hope (so much) that disaster can be averted.

Oh no, more fires in California. It seems that this has been happening a lot lately. Your sky photos are so pretty. I have a cousin that lives in Red Bluff, and I heard that there is a fire in that area as well. Will have to check up on her. Be safe and take care, Carola.

It sounds really scary. Wildfires are so uncontrollable. Even here in Germany there have been quite a few fires in woods, caused by careless people. The climate really seems to be changing. Have a good weekend, Valerie

I think it's time to move back to Germany, Carola!

I know you have a plan but I hope you don't have to use it. This is terrible -- I worry about friends in Novato and yesterday I heard of friends-of-a-friend in Boulder Creek who had to evacuate and have learned the fire is coming closer to the area where they live. To have lived through this once is terrifying; to have to do it again, so stressful and frightening. Thinking all good things for you.

My sister in Carmel has been asked to pack up. It is very frightening especially during the virus. Hopefully they will get the fires under control.

One of our first thoughts is to always wonder where all the people go to be safe. So sorry you are going through this on top of everything else, we are keeping up as best as we can, so many fires! We do see and smell smoke everyday but are not in harms way.

I really hope you stay safe and get some relief soon.

A scary beauty indeed.
May????
Fingers crossed for rain/that you do not have to evacuate!
They say in the news woods are very dry and prone to fire here in Germany, but that would be a tiny problem considering yours!
Toes crossed for you, too...

Oh. You´re in our news now.

The image of your former home was quite devastating to see, Carola. And the images of the sun and the clouds from your current home are also quite frightening. I have been watching images of so much devastation and also wonder where will all the people who lost their homes and everything go to? It's a very sobering thought and my thoughts are that you will not have to face such a decision once again. Thank you for this update as I was wondering how you were faring.

Crossing my fingers, that you don't have to evacuate! Stay safe, but leave if you have to. Wishing you all the best!

Yes, these fires have been on our news in the UK.
Thinking of you.

Oh no - I'm so sorry that you're going through this again! It seems like there are more and more fires every year - or is that just me. I can only imagine how COVID is complicating things. Stay safe!

You must be experiencing extra anxiety since you lost your home 3 years ago. It is all very scary, even more so because containment is illusive. I moved from California last September, after having spent 62 years there. I'm hearing from friends in Napa, Monterey Peninsula, Carmel, Carmel Valley. One has lost their home. Others have been evacuated. My parents still live in Davis, and the smoke there is terrible as well.

Fires here in Colorado, too, just 60 miles northwest of town. The air is causing my asthma to flare up and it ain't fun!

Here's to surviving these insane events! Best of luck to you, Carola.