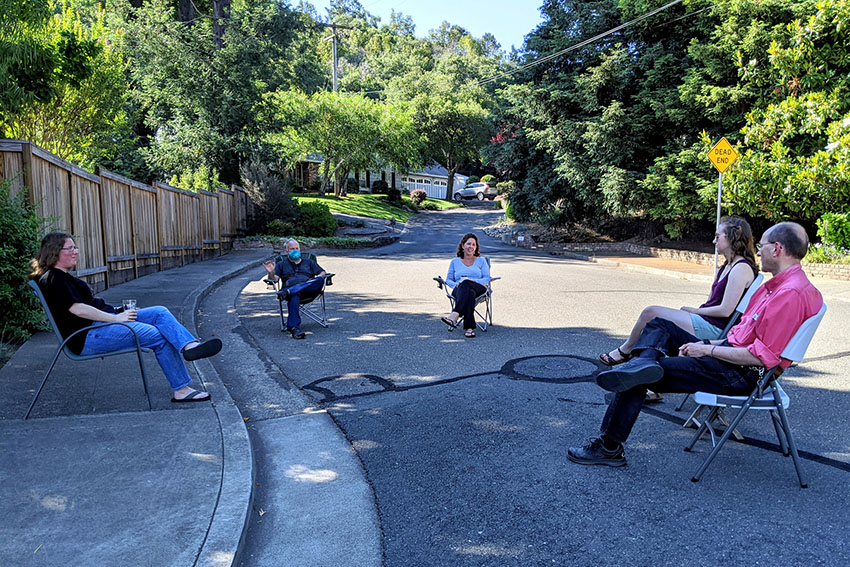 In June I gave myself a little challenge of taking at least one photo each day. I had become rather lazy with photography and I hadn't used my big camera since February when I last visited the beach. Thankfully there were several occasions in June when I finally used the big camera again - it felt so good.

Sometime in late April or early May (I can't remember exactly when) the neighbors in our corner started to gather for a happy hour on Fridays at five in the afternoon. We first were sitting by the side of the street; everybody brought their chair and drink of choice and we would sit 6ft. apart from each other and chat. It was wonderful to meet up. After a few weeks one of the neighbors had the genius idea to move to the cul-de-sac at the corner - it's quieter and it also offers more shade. Since then we have met up every Friday for an hour and a half to two hours and it is one of the highlights of the week. 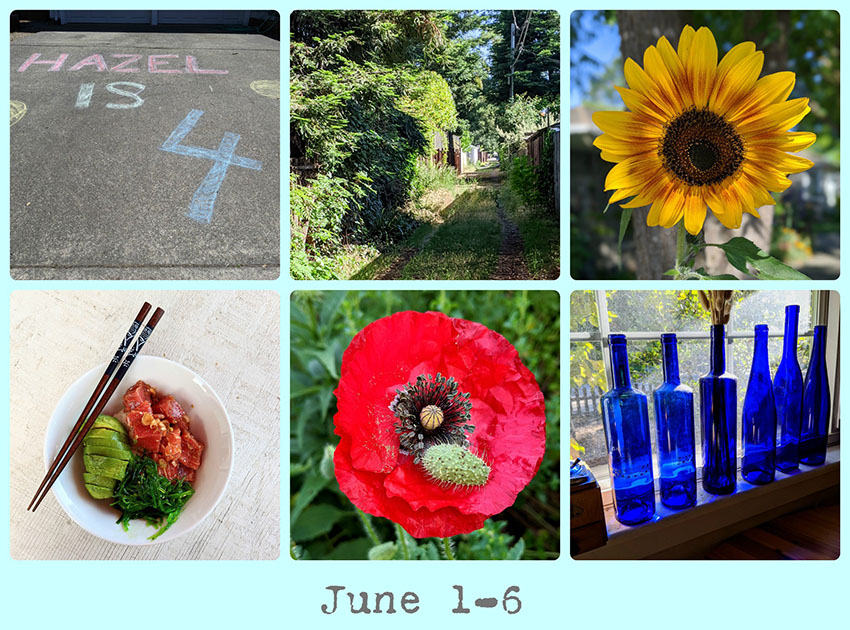 The little girl a couple houses down turned four and we did a drive-by birthday "party" for her. It was a lot of fun to see the decorated cars and bicycles pass by, honking their horns and ringing their bells.

During June I continued my walks, discovering the back alleys in the historical district of the town. These back alleys are very quiet and have almost a rural feel - it's hard to believe that we are not far from downtown when you walk here. They offer a lot of shade and unpaved trails.

I enjoyed my June garden a lot. The poppies were the bright spots and happily displayed their beauty. They all came from the poppies that I had first sown eight years ago. Since then they have self-sown every year - so easy.

Oh - and we had some very hot days in June when I simply wasn't up to cooking dinner. So I made tuna poké with seaweed, rice, avocado, and lots of sesame. 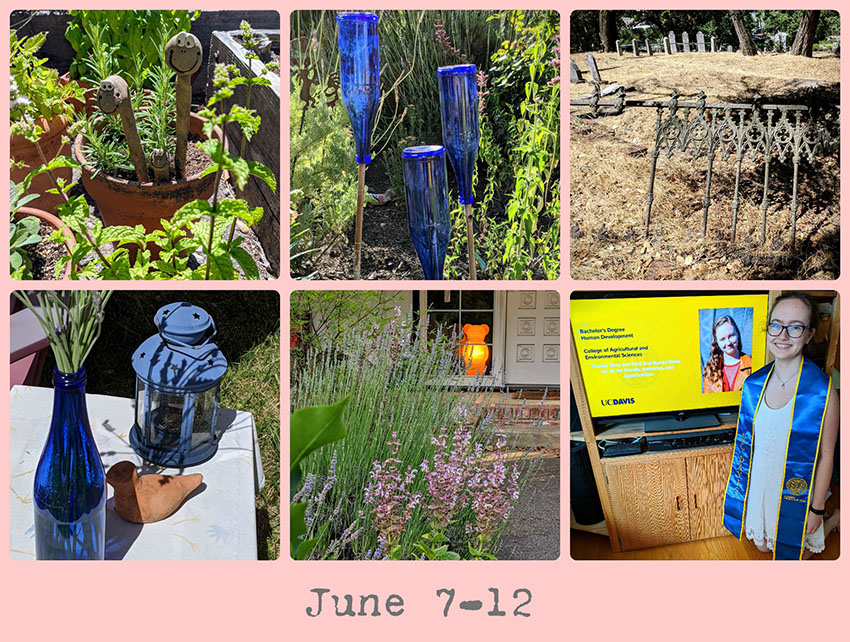 I was very happy when the Rural Cemetery was re-opened at the end of May. I've been there many times and each time I discover something new and see something from a different perspective. That place is never crowded, there are nature trails and lots of space to walk.

The glowing bear - Lumibär - at our entrance is from Germany. I bought it when the Geek and I were still dating. We were walking to our favorite café in Tübingen when we passed a shop that had several of these bears in different colors in their windows. There was no price, however. The Geek went inside to inquire about the price - it wasn't exactly cheap, but not very expensive either. Over some coffee and breakfast I pondered about it and decided that it would be fun to have it. When we entered the store the clerk greeted us with the words "Which color should it be?" We had to laugh about that. I chose the orange Lumibär (of course!) - that was in 1996. He moved with us to the US, he was in our evacuation "bag" - and next year he will turn 25. He shines in the mornings and evenings and the kids in the neighborhood love him. Some call him the "giant gummy bear".

We celebrated a big event in June - Kaefer graduated from the University of California, Davis. On June 12th was the virtual commencement celebration that we watched together. Of course it was very different from the "real" thing, but the important thing is that she graduated. She will now do her Masters, either in Munich or in London. She got in both programs and now has to decide where she wants to go. 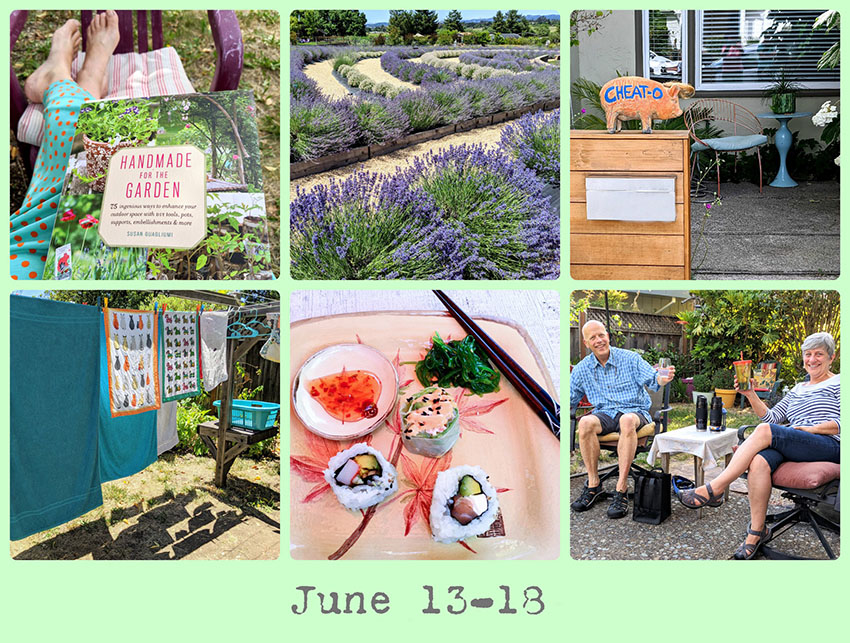 The middle of June brought more days in the garden and walks through the - like-minded - neighborhood. Friends of us came over for a social distanced couple of hours of good conversation and good wine, lots of laughing and the faint feeling of some kind of normalcy. One Sunday we visited the Lavender Labyrinth at a lavender farm which was fun - more pictures will probably follow in another blogpost. 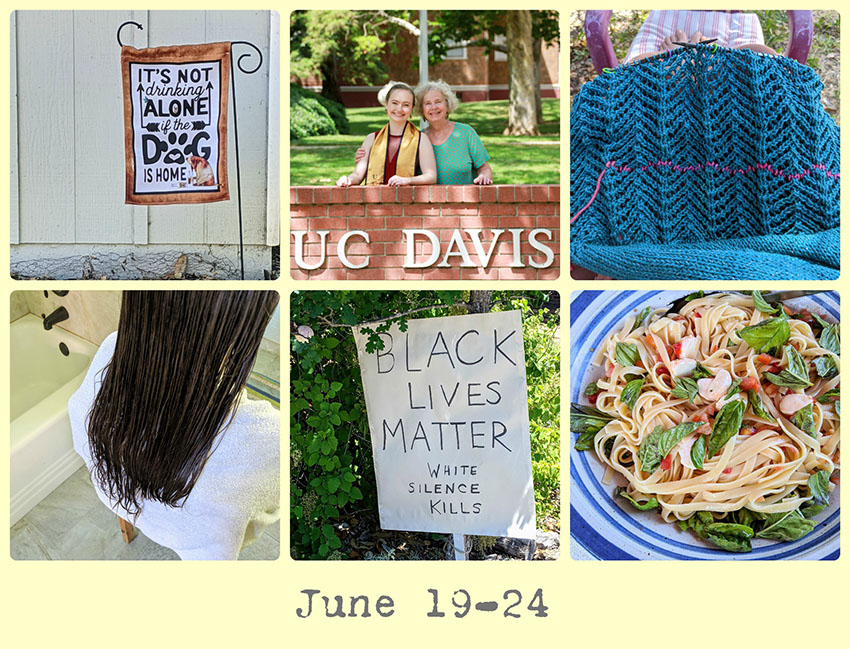 Kaefer went back to Davis to pack more of her things and I drove over one day to take graduation pictures of her and one of her best friends who was also her work mate. We took photos at different locations on campus that have had some meaning for them during those four years, and also a picture of her and myself. From that day on Kaefer has been staying with us which is a big gift for us before she will move to Europe.

I have started knitting a summer sweater for her, but I'm getting second thoughts about the neckline. It is a technique I have never done before and I'm a bit nervous about it. Maybe I should practice before! 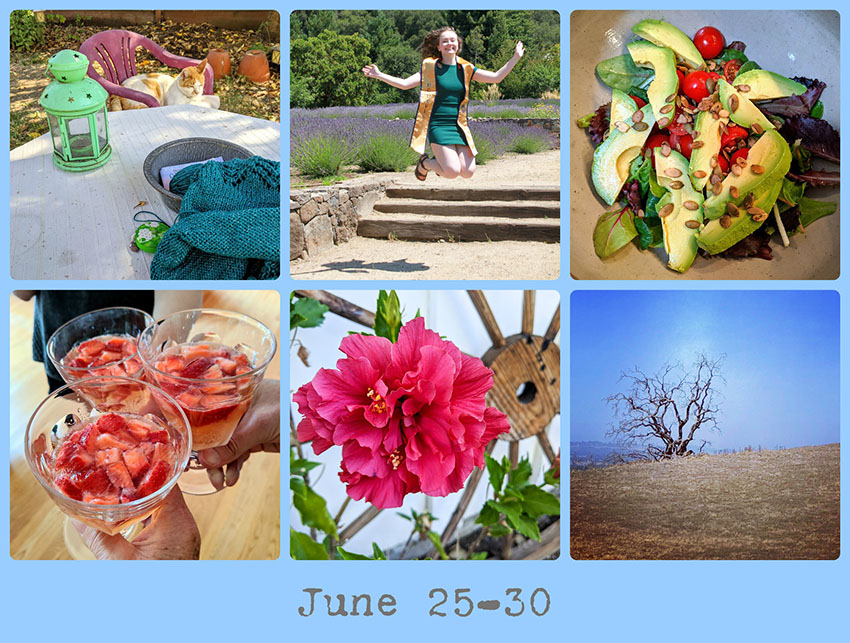 The last week of June... Kaefer and I went to the lavender garden of Matanzas Creek Winery (I wrote about those gardens here, here and here) to take a few more graduation photos. I simply love this place. I also finally went back to Crane Creek Regional Park - I'm still avoiding the lake since there are just too many people who don't distance or wear masks, but it's safe in Crane Creek - not many people and those I met were wearing masks when we were passing each other. This is another place that feeds my soul and I just hope that they don't close the parks again. Unfortunately the number of cases are going up again rather speedily (which I think results from opening up too early and too fast) and I wouldn't be surprised if we took a few steps back again.

Since the second week of June I'm officially on summer break. I had my last class with the German School on June 10th (I decided to offer two conversation classes of four weeks each) and am glad to have some "real" free time. However, I'm also on the "re-opening" committee of the German School where we work on different strategies on how to re-open our school in the fall. That is a ton of work!

How was your June? What are you doing this summer?

To all of you in the US - have a happy Fourth!

This is such a beautiful and heart-warming post. Many, many thanks.
Your distant socialising looks like a heap of fun.
Kaefer is going to Europe? You will miss her. Overseas travel is a virtual impossibility here at the moment. Our borders (including some internal ones) are closed.
Stay safe, stay well.

Your post proves the point that all stories related to the Coronavirus are not characterized by gloom and doom, and perhaps we will have developed new habits and practices long after the virus is but a memory. Books will be written about this period.

I love the photo of you and Kaefer with big smiles! I keep thinking I need to start using the "big" camera again. The phone is just so easy. I enjoy the photos of your garden - so much is blooming. I have lots of green but not much color yet (except for wildflowers which are blooming like crazy).

Hello again from a newcomer to your blog, Carola. I enjoyed these collages looking back on the month of June as seen through your camera and experienced by you and others. The lavender maze looked amazing (bad pun). Congrats to your daughter on her college graduation and best of luck. I liked the social distancing happy hour and we have done something similar by the riverside here with neighbors.

It looks like you have a great neighborhood - I love the idea of Friday happy hours! Your idea of a photo each day is such a great idea. I love seeing the things that you've done during the month - so many good images. And congratulations to Kaefer. Graduating is a big deal. My heart goes out to the seniors, this year, it seems they missed out on so many of the good parts of their final year of either high school or college. But I'm sure she'll do well. I look forward to hearing about what her masters program has in store for her.

You had a big month! I love that you made the daily challenge and look at the wonderful images you created. They tell a story of your month. I'm glad school is out now and you can enjoy for a couple of months.

You have so much in common with everyone this month--flowers and isolation; need for activity--fear of the unmasked; need to cook -- wish for a day off; seeing one's kids -- wishing they could lead a safer life!

Hello Carola, Here's the return visit to your first comment on my blog :-)
I very much like what I see here; plenty of beautiful pictures and good descriptions of what has been going on in your life. Like you, I worry about the "too early, too fast" and wonder whether we will have to take several steps back. So far, everyone here on the news keeps saying no, it's fine; most of what I observe when I'm out walking, travelling or shopping looks like people largely believe the entire Corona episode is over, when our experts keep saying it isn't.

I love your happy hour in the cul de sac. That is truly something to look forward to.

You have some beautiful meals. I hope you will take more photos. Feel free to share any time you wish on Sunday Salon.

What a great idea your self-challenge is. I haven’t taken many photos either but did get out yesterday and take pictures of my thriving cone flower plant! Love the story of your glowing bear. How wonderful that you and your neighbors are getting together once a month, while being very sensible about it. The little girl’s birthday celebration was very touching! Also, congratulations to your family and their accomplishments. You took many lovely photos and shared experiences in June. I thank you so much for sharing them. Enjoy your summer break :)

Oh, I love those cobalt blue bottles, they're so pretty. Looks like you had a nice June, Carola. That salad with avocados looks so Yummy, and sunflowers in salads makes them taste even better. That green lantern is so cool. It looks like you have an eclectic style, which I've always loved. Unique items that are one of a kind. The lavender farm is beautiful. Would love to have seen that. : )

Have a wonderful week, Carola.

I seriously can't believe Kaefer has graduated already! It seems like yesterday that you were first dropping her off at college. I wish her luck with her choice of grad school - and hope it is able to be open when she should be starting!