I am a day late for last month's "An Image and Its Story" - this is what a Thanksgiving weekend does to you. I guess you can relate. 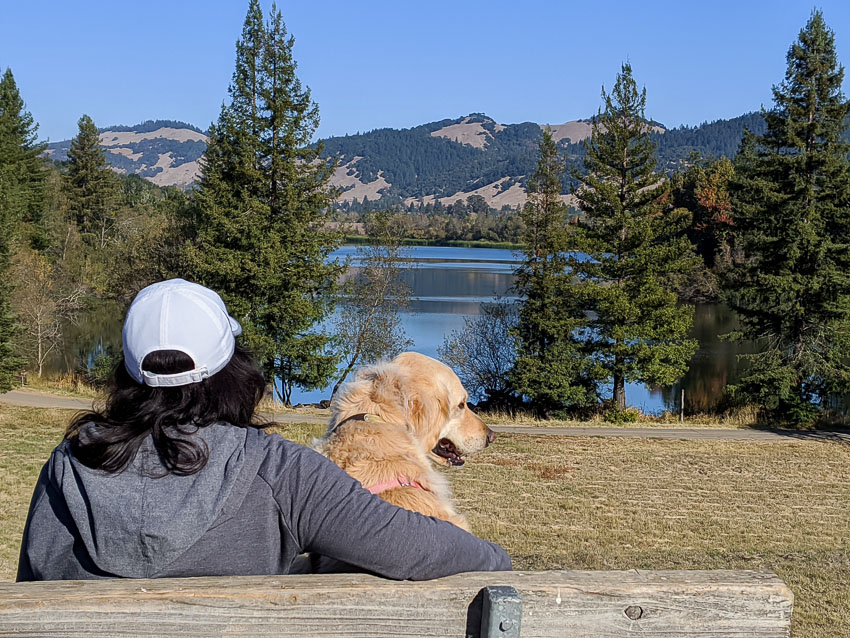 I was almost finished with my morning walk around the lake and on my way to my car when I came upon these two. The moment I stepped off the trail out of the woods I had seen them, but since from that perspective they were only silhouettes against the sun I wasn't quite sure what exactly the second "person" was - yes, I had first thought it was another human being (and I wasn't the only one - a lady who came towards us while I was taking the picture told us that she had first thought the woman was sitting there with her boyfriend!). The closer I got and changed my position to the sun I could finally see the dog and had to chuckle inwardly. But then immediately the photographer kicked in and I thought what a great photo this would make, so I asked the woman whether I can take her picture from the back with the dog by her side. She readily agreed. Unfortunately the dog didn't look straight over the lake like its owner but turned its head because there was another dog approaching (with the "boyfriend"-lady). However, when I saw the photo I thought no matter what, it was sweet and I just loved this moment of a human-dog friendship. There was so much tenderness and love between the two - this picture easily made November's image.

Thank you for this celebration of beauty and love. Big thanks.

It's a terrific photo, Carola. And sometimes those best ones are those you just happen upon, like this one. Plus, what a pretty view!

What a fantastic photo :)

Carola … that is a beautiful photograph, and the view is majestic :)

Yes, this is a special photo, Carola. There's just something about it, right? The lake in the distance is beautiful. And two friends sharing a moment together. Sometimes our pets are our best friends. This is certainly a lovely photo. : )

Hello Carola, I felt sure I'd left a comment on this post … but in case it's gone missing, I will comment now.
A beautiful photograph, I love it!

What a lovely capture and a beautiful view. It does look like a lovely place for a walk. Enjoy your day, have a happy weekend!