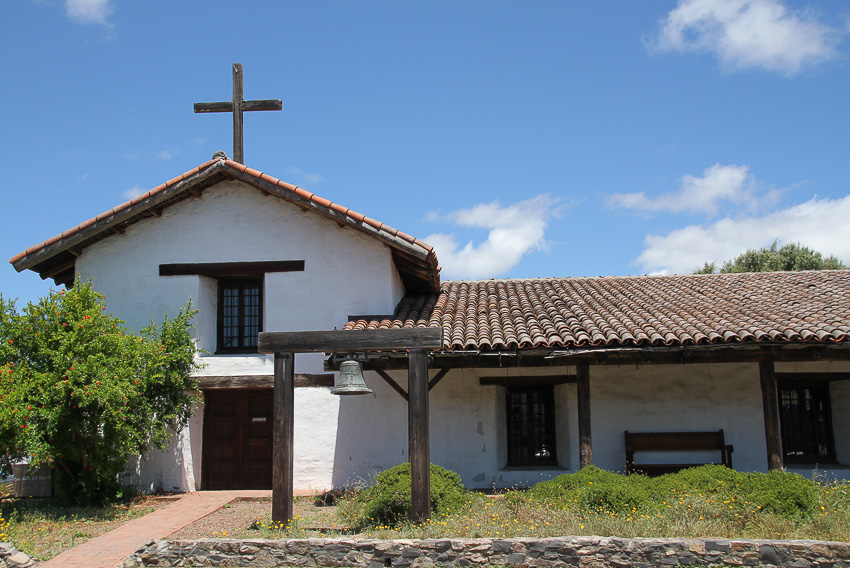 Along the California coast there are many missions built by the Spanish and Mexican governments in the 18th and early 19th century to protect their interests in North America. The first one was built  by Jesuits in Baja California in the South and the last and furthest one to the North is the Mission San Francisco Solano in Sonoma. It is not as impressive and famous as the ones in Santa Barbara and Carmel but more simple and unadorned like the one in San Luis Obispo. 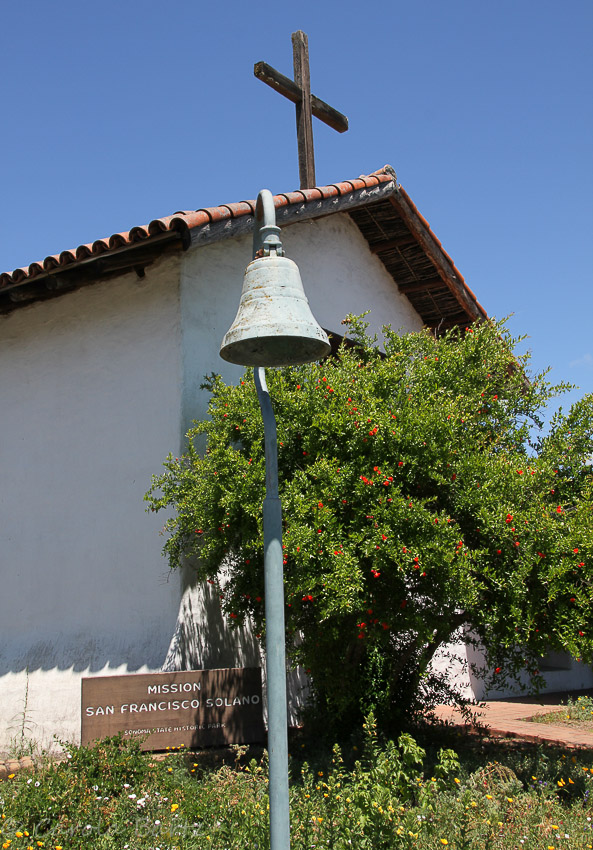 All the missions in California are connected by a branch of El Camino Real (the King's Highway). Many parts of El Camino Real later became modern roads, and in 1906 volunteer organizations began marking El Camino Real with mission bell guide posts. You can find them at many places along the road. 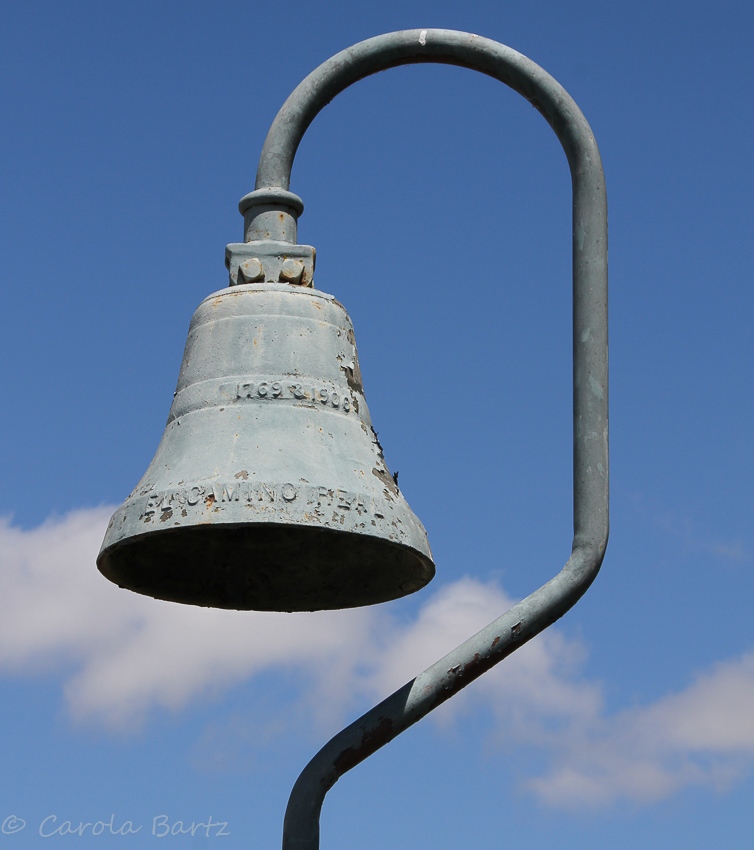 North American territory and resources were attractive to major European countries. Although several claimed parts of the Californias, only Spain and Russia established permanent settlements. Russia created Fort Ross in northern Alta California ('Upper' California) to protect its growing fur trade. The Spanish and Mexican governments extended the mission system north to San Rafael and Sonoma. United States expansion led to war between Mexico and the United States and resulted in division of the Californias. 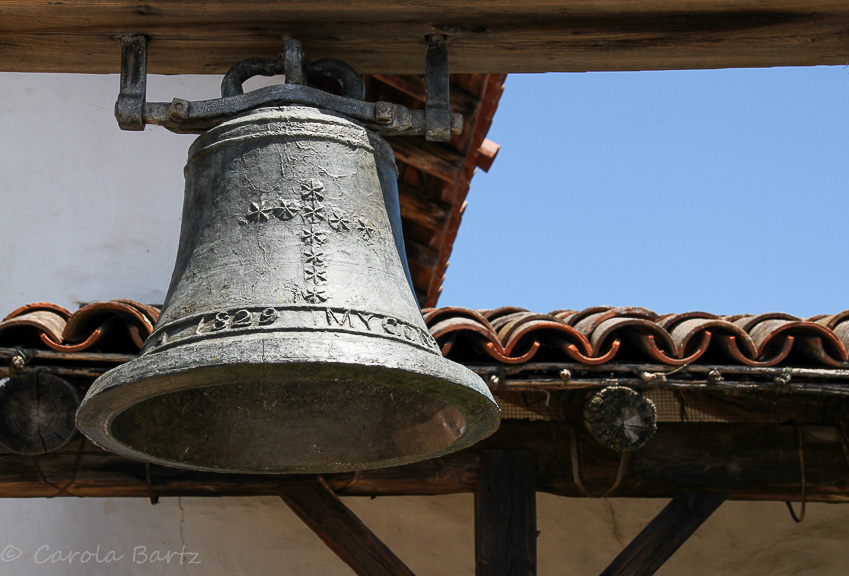 Since Sonoma is so close to home I used my free summer to visit the mission once again, but this time I went on my own and could spend my time there just the way I wanted.

The mission is built in the typical Spanish style, straight without any fancy additions, with whitewashed walls and wooden beams. The roof has clay shingles - I love this kind of roof since it always reminds me of home.

Of course there is a church - what would a mission be without a church? - albeit a very small church indeed. Plus there's an old dining hall just around the corner from the church (pray and eat...) 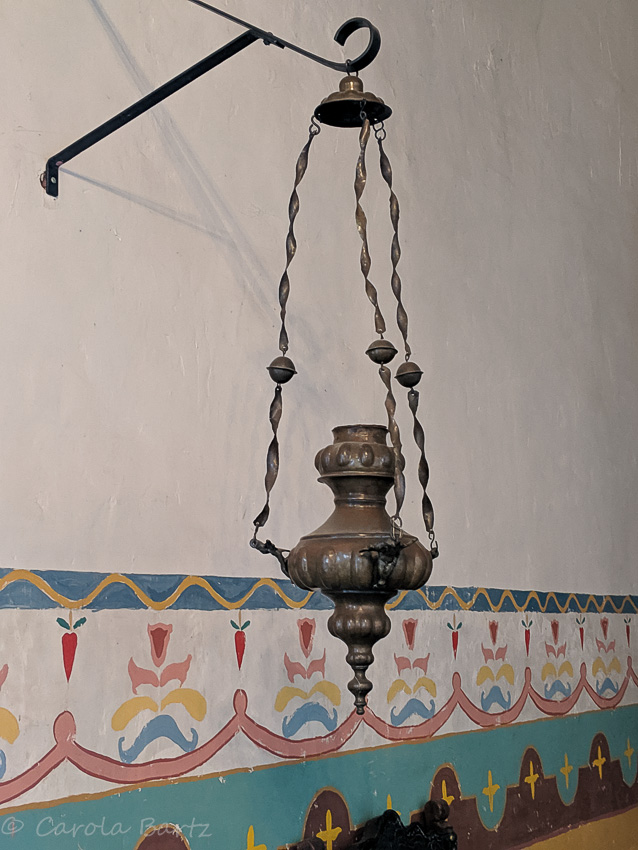 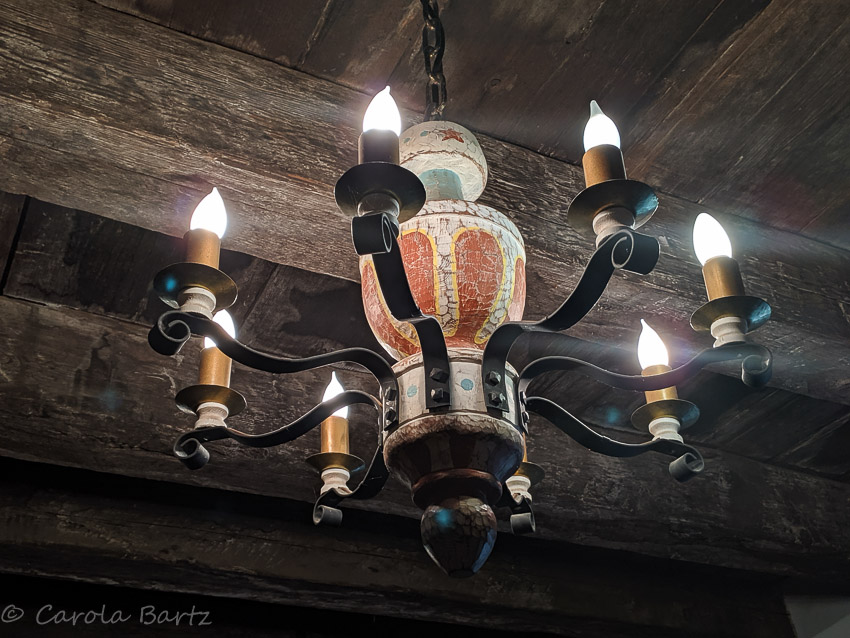 Let's take a moment and talk about Native Americans.

When the first Spanish arrived in the Californias in the 16th century they met a diverse population of Native Americans. They spoke many different dialects and languages, and were divided into a multitude of tribal groups.

During the thousands of years that Native Americans lived in the Californias their cultures evolved to coexist with the natural environment. The Spanish introduced European methods of farming and ranching that drastically altered the natural environment and changed the diet of the Native Americans. The missionaries saw their role as bringing their religion to the Americas. The Spanish government used the mission system as a method to colonize its empire. The missionaries were to turn Native Americans into colonial citizens by converting them to Catholicism, and by teaching them the Spanish language, methods of farming and ranching and a variety of craft skills. However, they also considered the Native Americans as necessary laborers, and in some instances forced them to work in the missions. Each mission was to remain under church rule for ten years, and then the land was to be turned over to the people of the missions. This goal was never reached even though the church operated some of the missions for up to 130 years. Diseases brought by the Spanish devastated many tribes, and many Native Americans died before they could assimilate into Spanish society 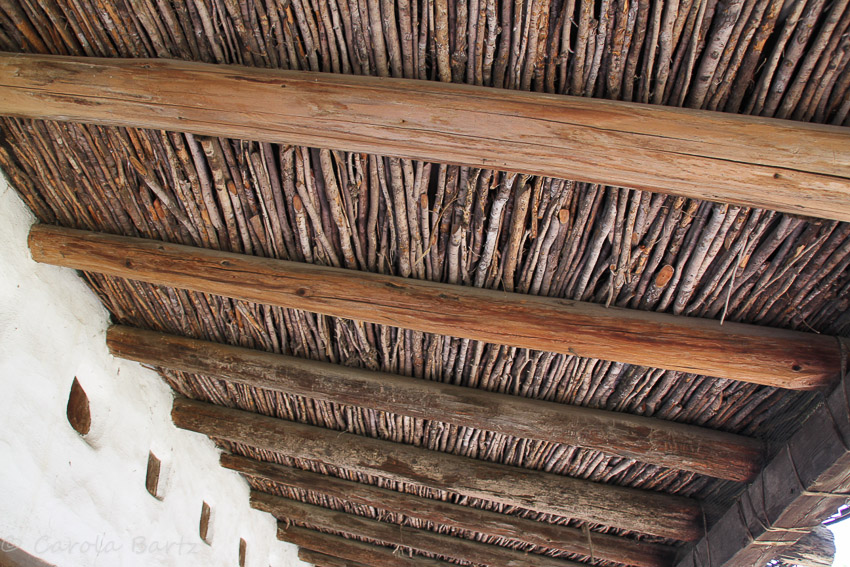 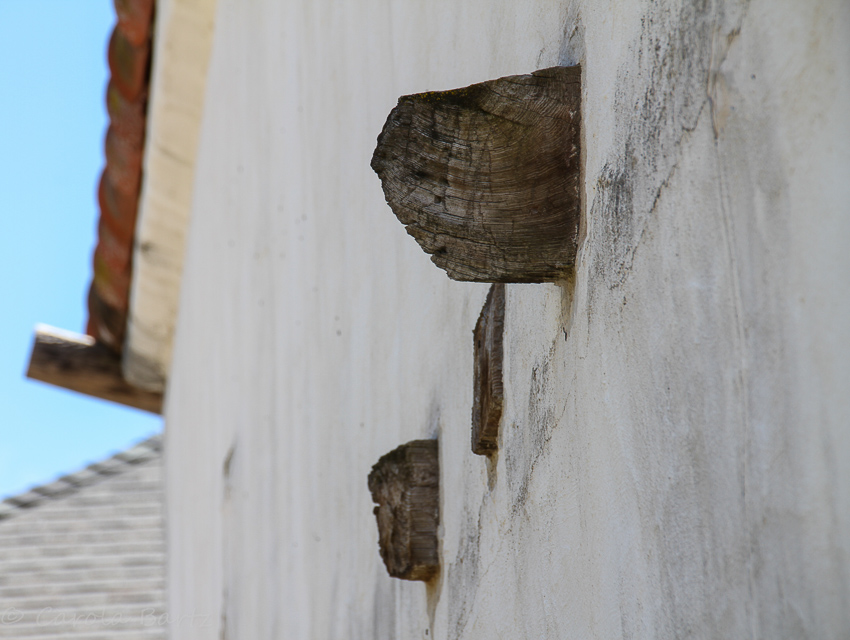 The missions left a permanent impact on the Californias. The negative and positive results are evident in all areas of our society. Regardless of the intent of the missionaries, the results were devastating to Native Americans. Their populations declined drastically, and the survivors lost a great deal of their culture.

The missions, forts and towns became the new communities in the Californias. Structures were built of local materials such as branches, logs, earth, adobe bricks, clay tiles and stones. Missions were more than a church. They included living quarters, workshops, warehouses, farms and ranches. The forts, or presidios, served as centers of Spanish military and governmental power. Presidios could also house a whole community. Towns, or pueblos, accommodated increasing populations and reinforced Spanish claims to the region. After the secularization of the missions, some assimilated Native Americans migrated to the pueblos.

By 1900 a historic restoration movement began that led to the protection and reconstruction of some of the remaining mission churches. 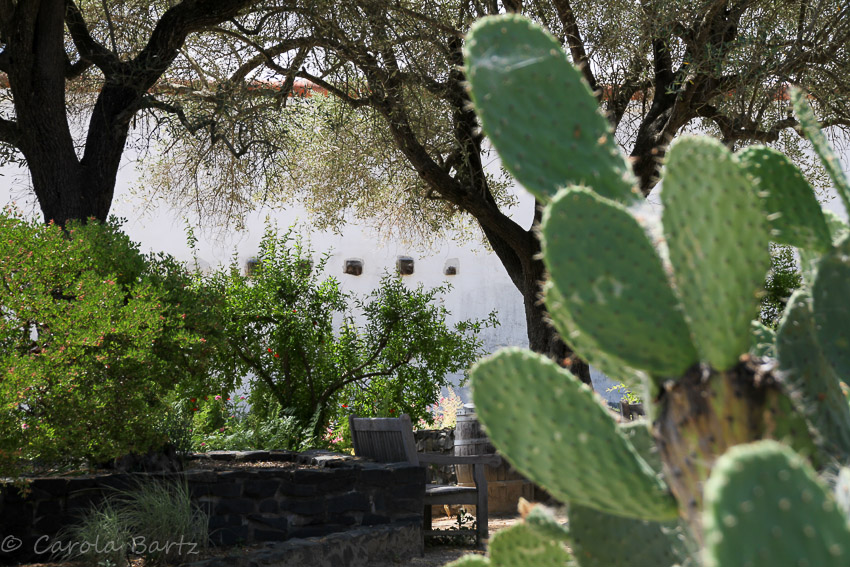 The mission in Sonoma was the last one to be built and is a rather small one. Today it is part of the California State Parks system. It sits right at the Plaza in the very center of town. It only consists of the church, the dining hall and two or three other small rooms that are made into a museum. The best part (at least for me) is the courtyard in the back. 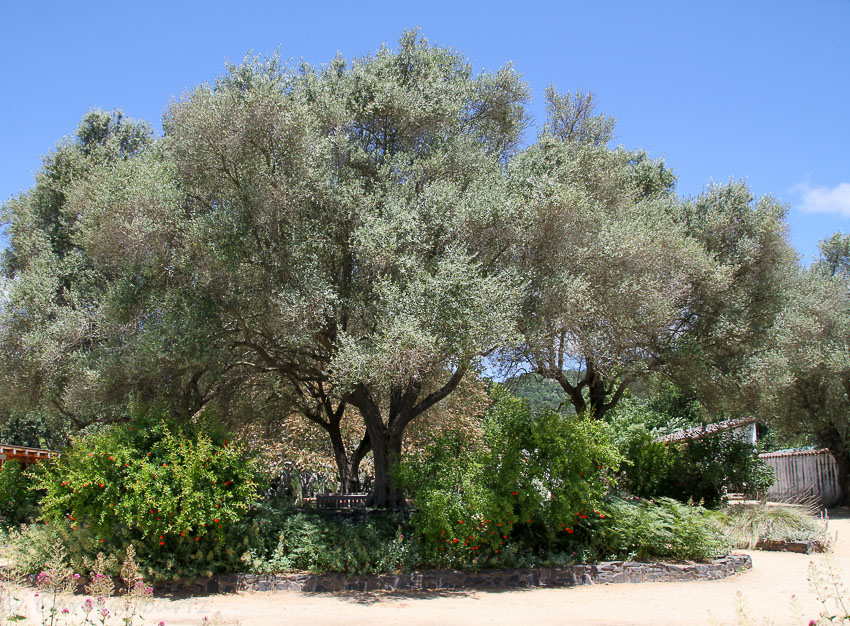 Under these large olive trees you can find a few benches arranged around a fountain. It's shady and cool here, a perfect place to sit and read or write in a journal or just contemplate life. 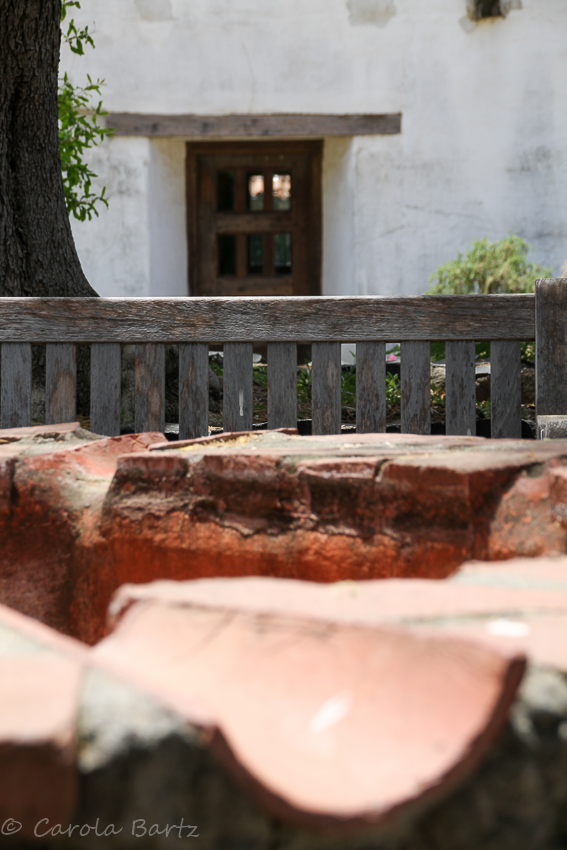 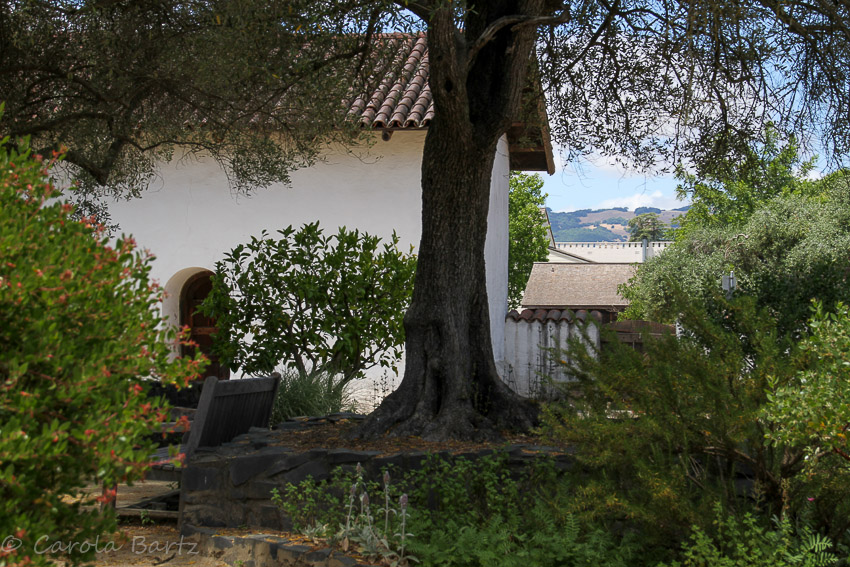 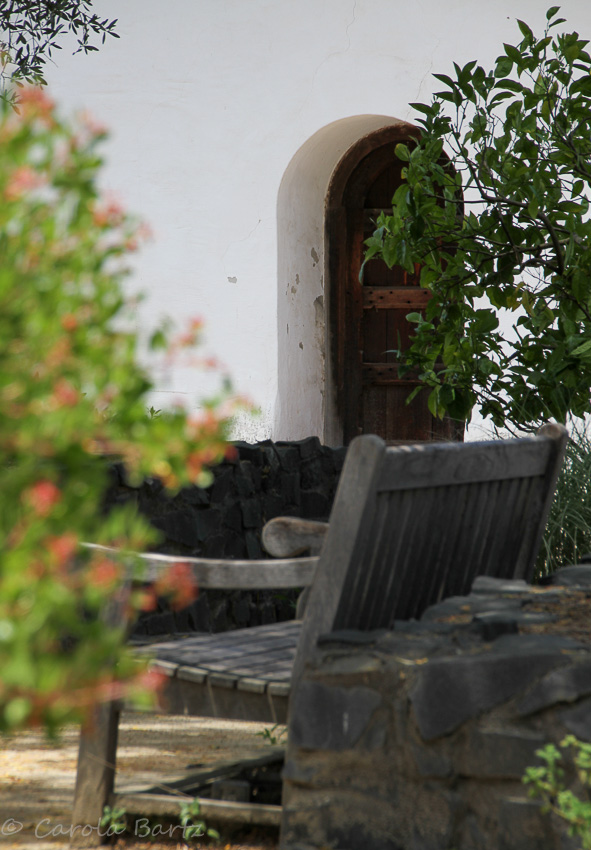 When I left this place I had learned a lot about the missions in California. I have always liked the beautiful buildings, but not all of the history is something to be proud of. 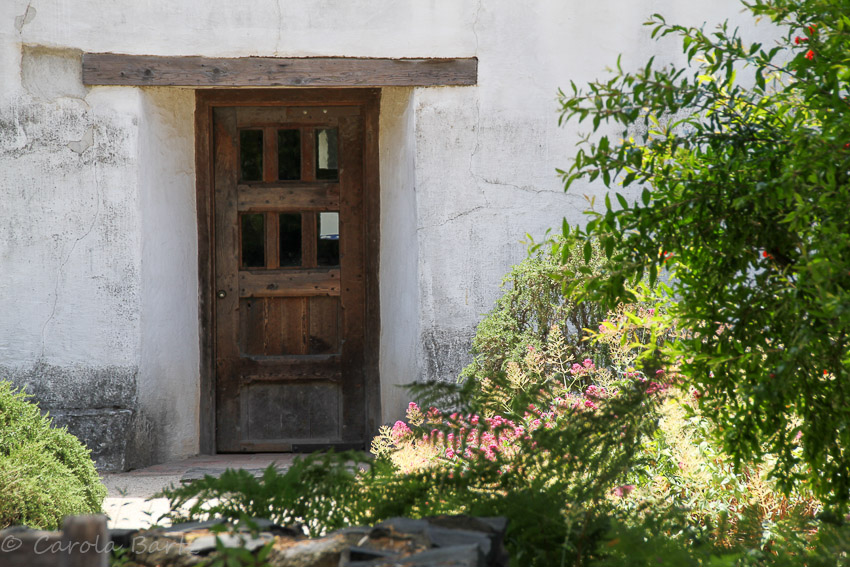 They are a part of the history if California, Carola, but as you rightly point out they were far from benign in their impact. I suspect that if you asked a white person and a native American for their perspective on missions you would get two very different impressions of the same institutions.

I always find missions profoundly beautiful and wonderful photo ops. You have mastered that with these magnificent images.

Thank you for this post. You have shown us some beauty, and reminded us of some of the costs.
Colonisation is so often a very mixed bag for the people/environment which is being colonised. I admit to some sadness that the missions are being restored and the culture of the first people is simply gone, changed irrevocably.
The same is true here. And shames me.

Till date I visited 4 missions. I heard that the missions were built in such a way that it will take one day to reach from one mission to another. I love those old building, but the history always makes me sad.

Your photos of the mission are beautiful- I love the courtyard! I have mixed feelings about the history. It’s impossible to know how things would have moved forward without interference, but seems so unlikely to me that the Native American culture wouldn’t have changed and evolved somehow.

So very lovely, these missions and bells, trees and fountains. If only they could have learned from The Native Americans how to live in this new place instead of changing all they were doing right, well, just imagine!
Thanks for the beautiful, calm images and for sharing so much history.

I think the photographs you've shared of the mission are beautiful.