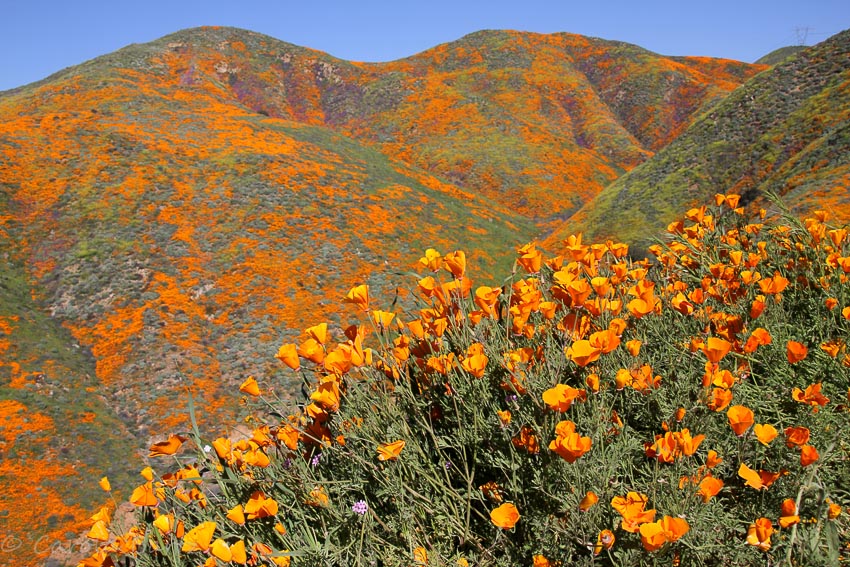 Last week we returned from a short road trip through Southern California into Arizona. It was spring break for me; both the Geek and I were more than ready for a change of scenery.

We left right after I came home from teaching at the German School and made it to Monterey where we stayed the night. While driving down stunning Highway 1 along the California coast we realized that this was the first sunny weekend we had in weeks and everybody was out and about. 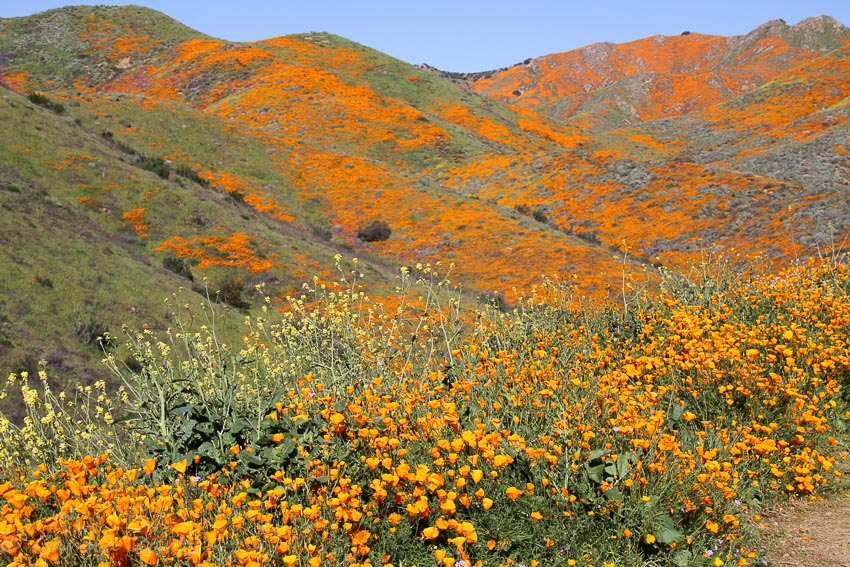 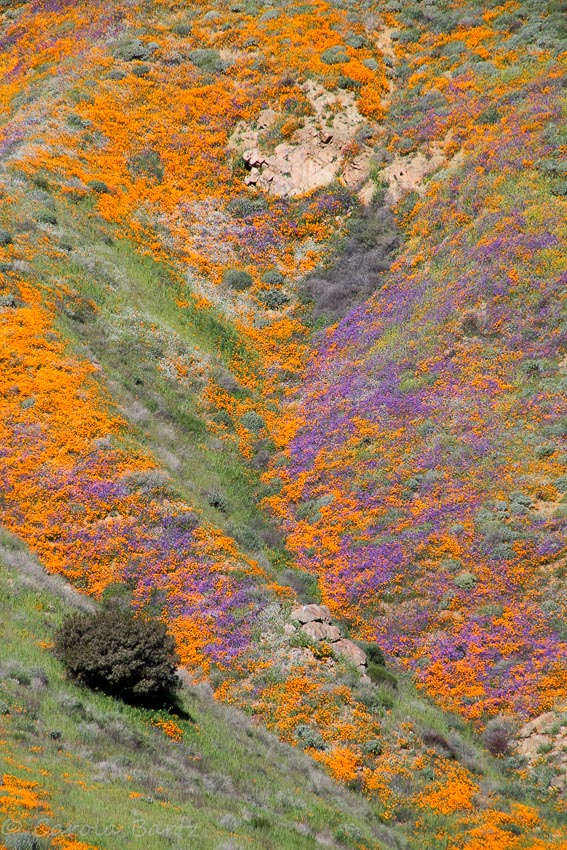 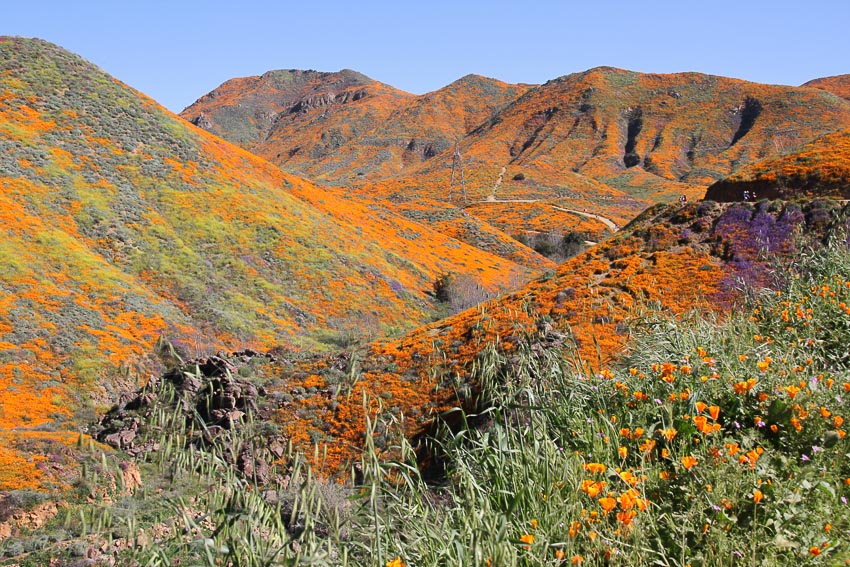 One of our destinations was Walker Canyon in Lake Elsinore, Southeast of Los Angeles, where the superbloom after all this rain was said to be spectacular. But we were getting second thoughts whether it was such a brilliant idea to go there on a Sunday afternoon - we were pretty sure more people would have the same idea. Instead, we booked a hotel in Lake Elsinore, arrived there when it was already dark and walked into Walker Canyon first thing the following morning. 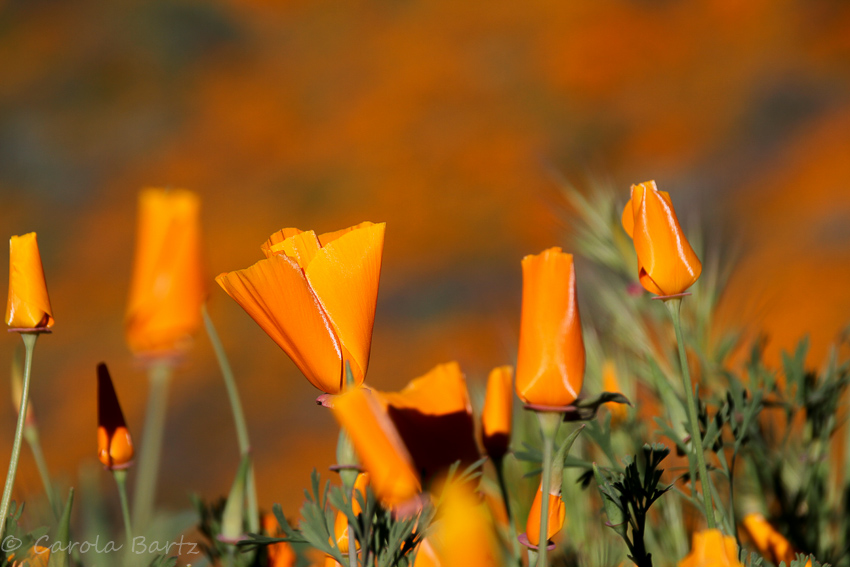 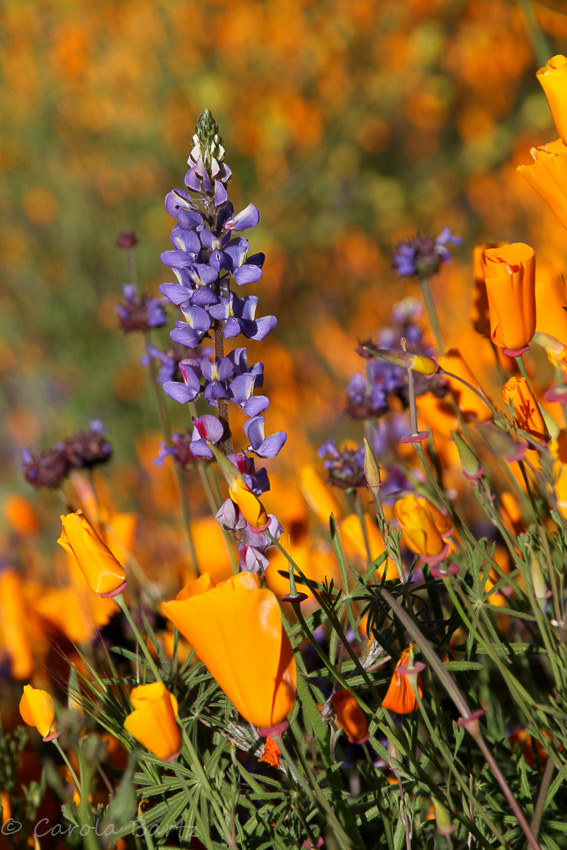 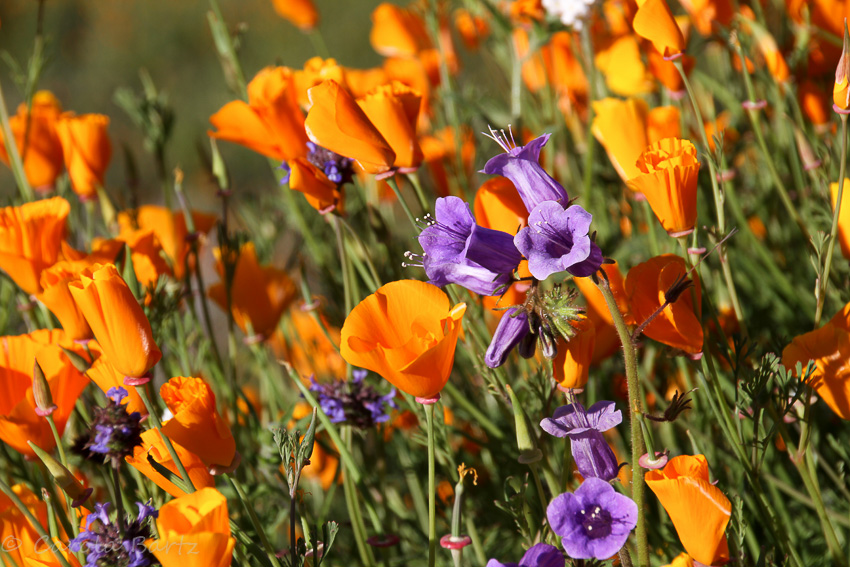 Good thing we did! We heard that on that Sunday about 50,000 people tried to get to Walker Canyon and caused complete chaos - it actually made it into the national news! The trailhead in Walker Canyon is right next to the Interstate, and at some point they even had to close the exit ramps because the chaos was just too much and out of control.

However, when we arrived early on Monday morning there was still ample parking. It was already busy, but far from the chaos of the weekend before. We walked up the trail and were speechless when we saw the blooming hills - a brilliant display of green, purple and LOTS of orange. 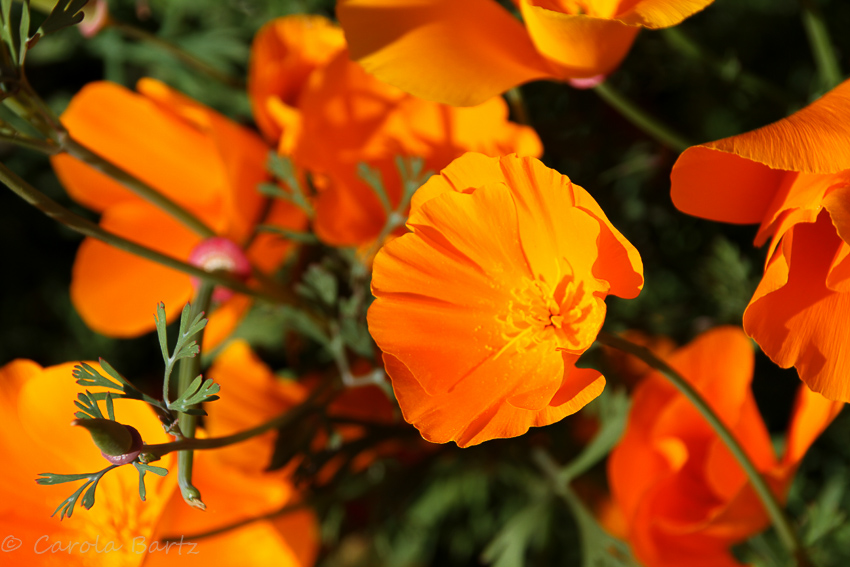 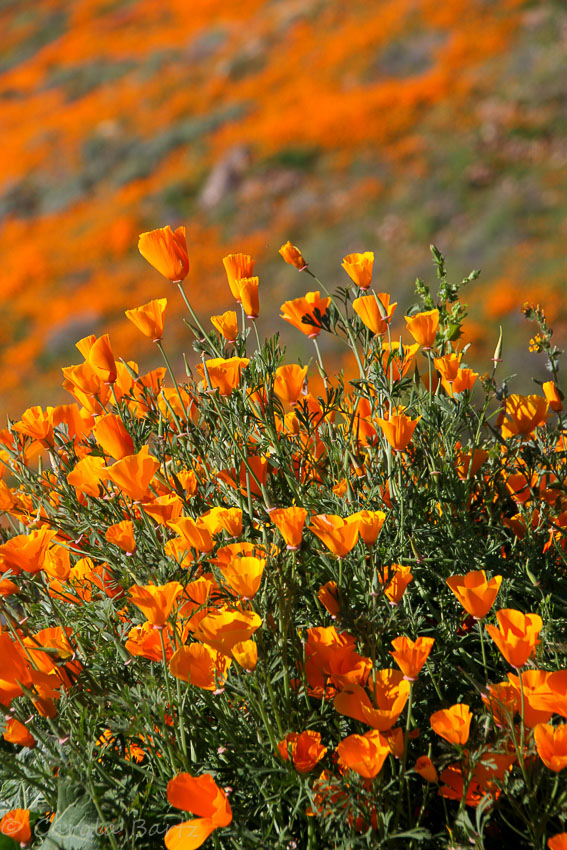 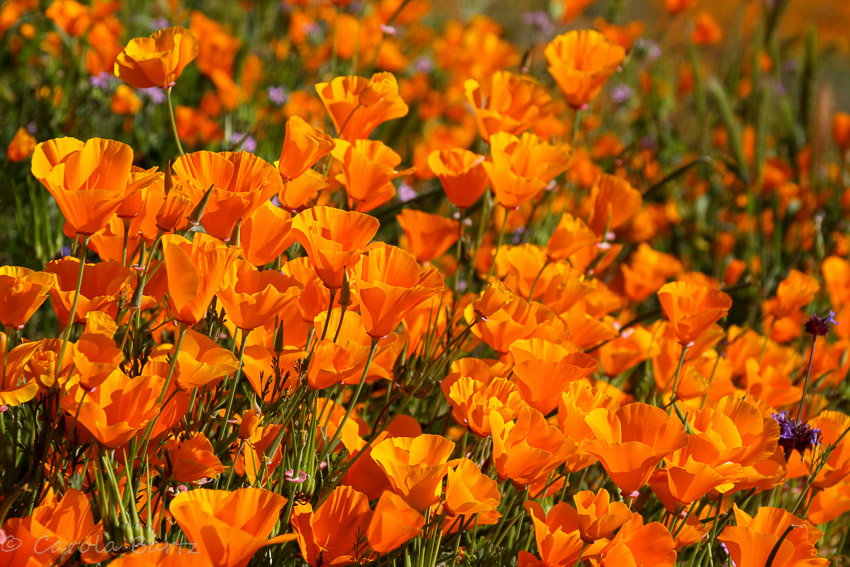 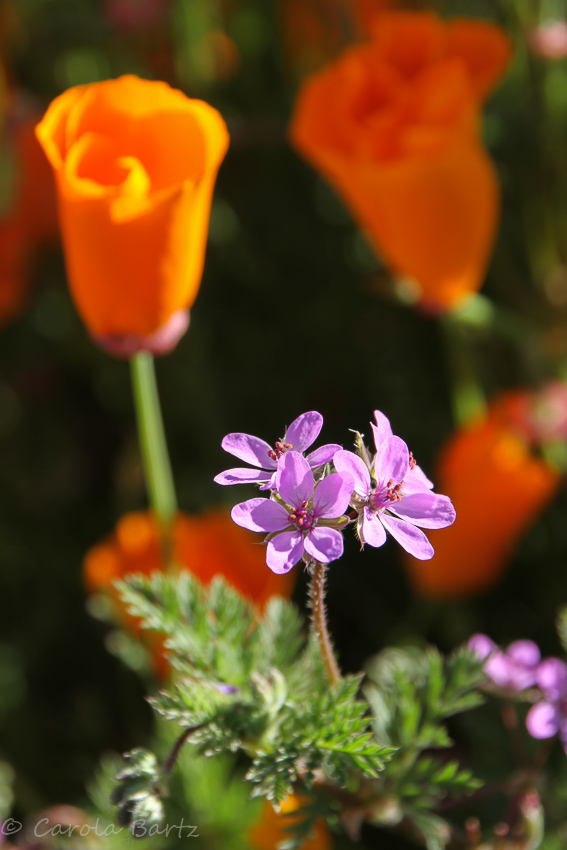 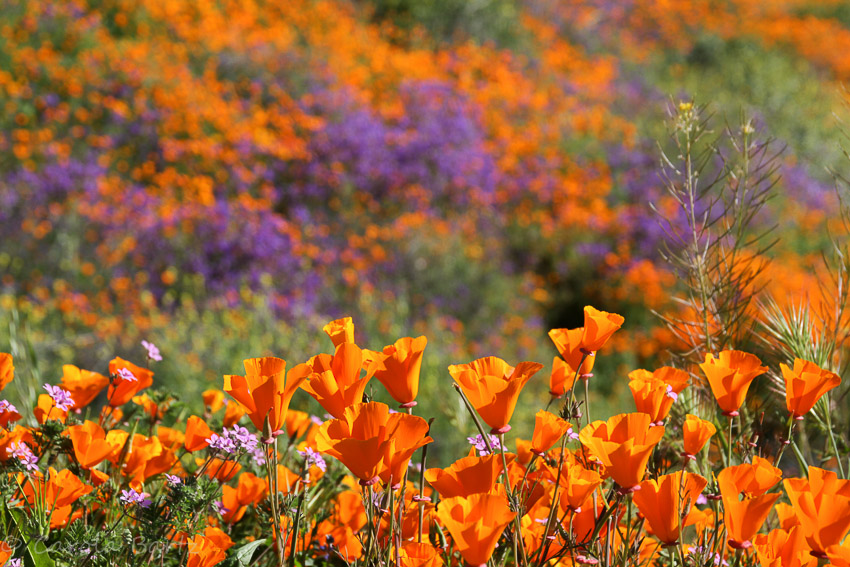 So early in the morning the California poppies - the source of the orange - hadn't opened yet, but the higher the sun rose in the sky and it became warmer the flowers opened up and the orange color became even more intense. It was an incredibly beautiful display of nature's endless treasures. 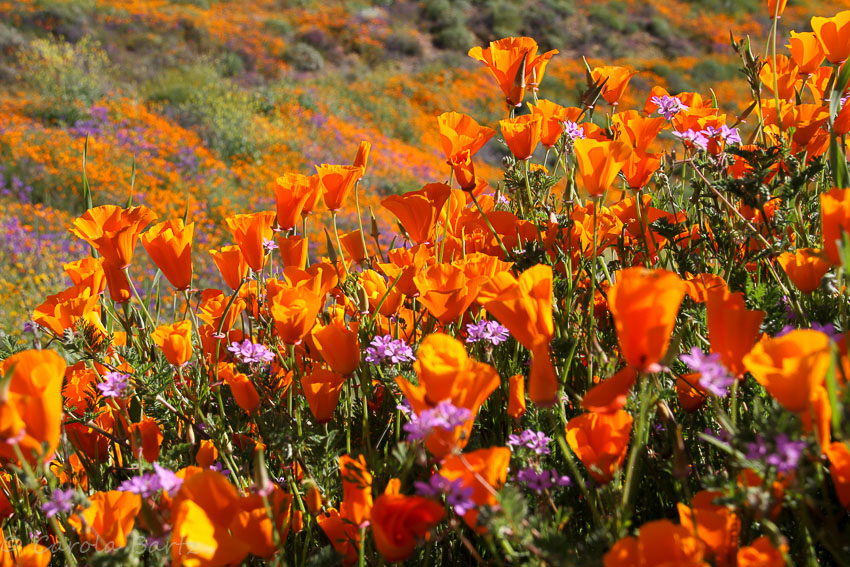 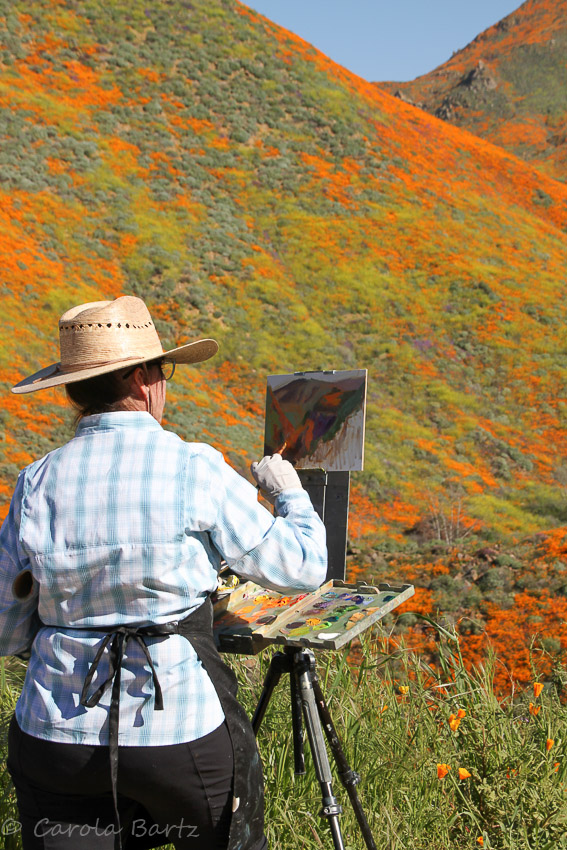 If only people respected and treated her more responsibly. 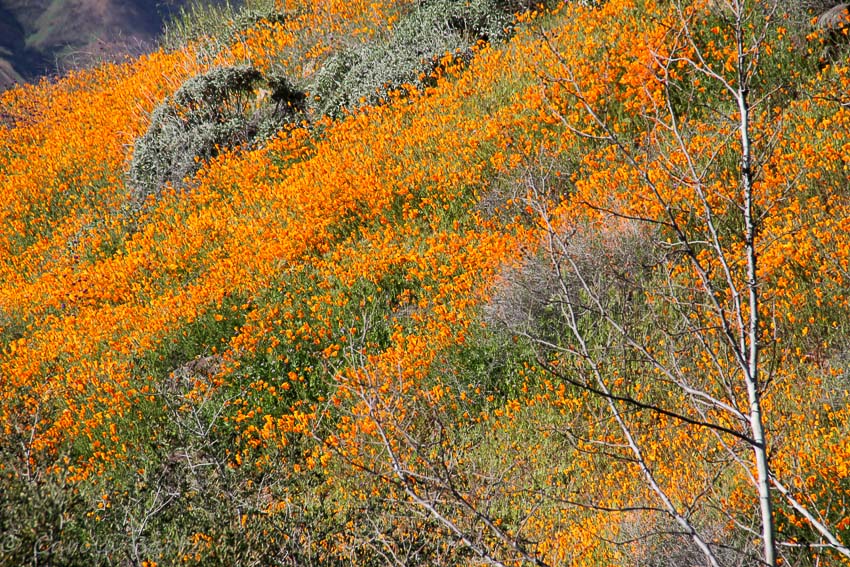 wow gorgeous photos. I especially love the close ups of the purple (is it lupine). I'm hoping to go to the Living Desert in Palm Springs in a few days - I'm wanting to see blooms out in the desert.

Fabulous photos! I love them! Lucky you to get to see the superbloom, it is one of my dreams.....

This superbloom is amazing! It is wonderful that so many people are getting out, wanting to enjoy nature (even though it is causing chaos). Orange poppies have always been a favorite of mine although I have never planted them.

The California Poppies are beautiful, Carola. I've never seen that many at one time. And the Purple flowers mixed in are gorgeous. I'm very familiar with Lake Elsinore, such a charming place to visit. Your photos look like a magnificent painting. Truly lovely, Carola.

Happy April days to you.

all this beauty and wonderful color just leaves me weak in the knees!

All week I've been reading about the superbloom but your photos are by far the best I have seen,

Those photos are absolutely beautiful!

Hi Carola, Wow, your superbloom photos are just wonderful. So happy I stopped by to enjoy them. Thank you for sharing! John

Oh my goodness, what splendid photos! Almost as good as being there. The blooming even made it into the papers in the UK.

Oh Carola … simply STUNNING … the beauty and colour is amazing.
I've scrolled up and down this post quite a few times just enjoying the sheer colour and beauty.

I agree with your last sentence!!
This is truly magnificent! WOW!! I have never seen anything like this before!!
Big Hugs!