In the Land of Fairy Chimneys 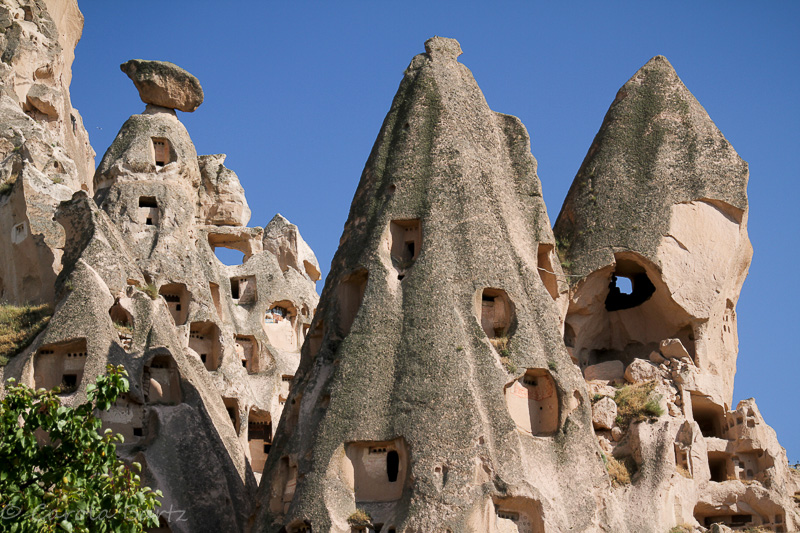 When we visited Turkey we didn't limit our time to Istanbul even though we could have easily stayed a couple more weeks there (and still not see everything). But we wanted to explore more of Turkey, go into the interior. So after one week in Istanbul we rented a car, crossed the Bosporus into Asia and started our "Anatolian adventure". 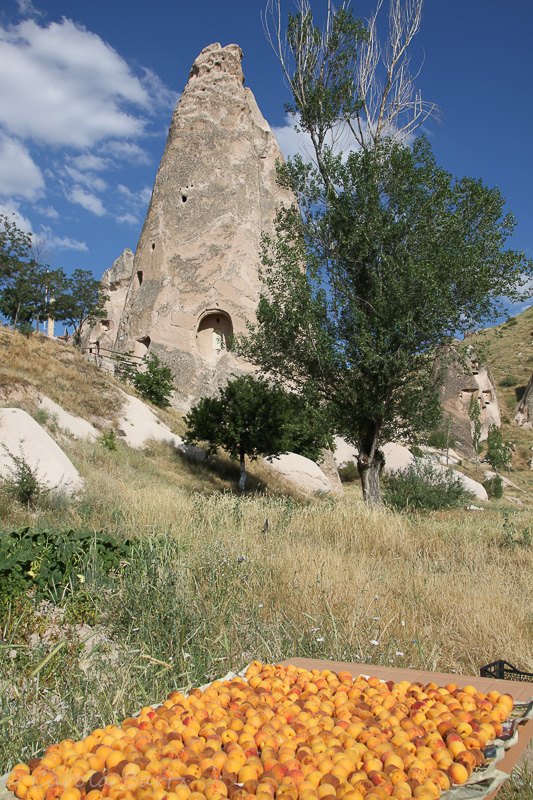 One area we wanted to see no matter what was Cappadocia, a historical region in Central Anatolia. Here you can find exceptional natural wonders that are characterized by fairy chimneys and a unique historical and cultural heritage. The UNESCO World Heritage Site consists of Göreme National Park, Kaymakli Underground City and Derinkuyu Underground City. Except for the last one we visited all of these places - and they truly took our breath away. 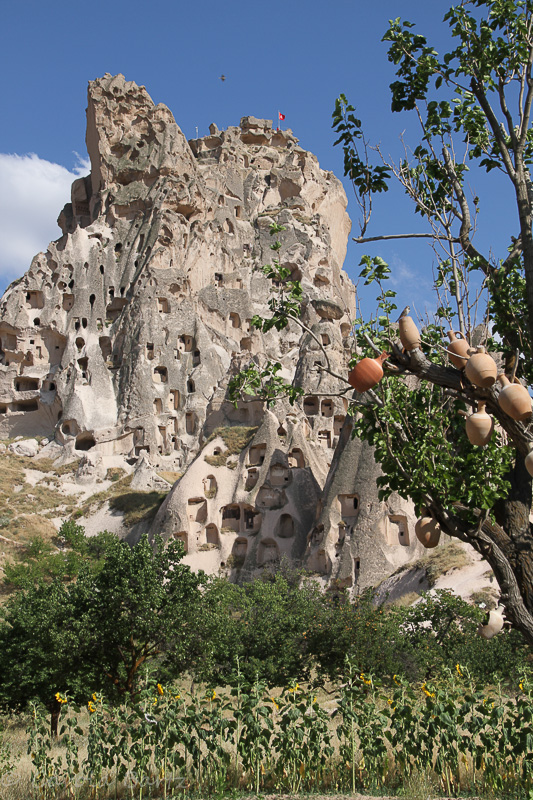 So what are these "fairy chimneys"?

The relief consists of a high plateau over 1000 meters altitude (hot summers and cold winters) that is pierced by volcanic peaks. The sedimentary rocks of Cappadocia eroded into hundreds of spectacular pillars and the people carved out houses, churches and monasteries from the soft rocks of volcanic deposits (this happened from the 4th to the 11th century). There are entire underground cities that you can visit if you feel like it (more about that in a later post). 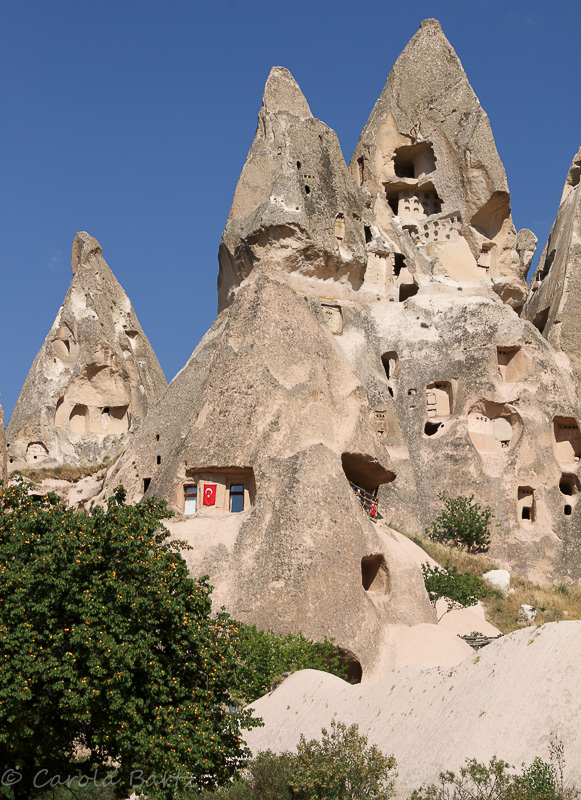 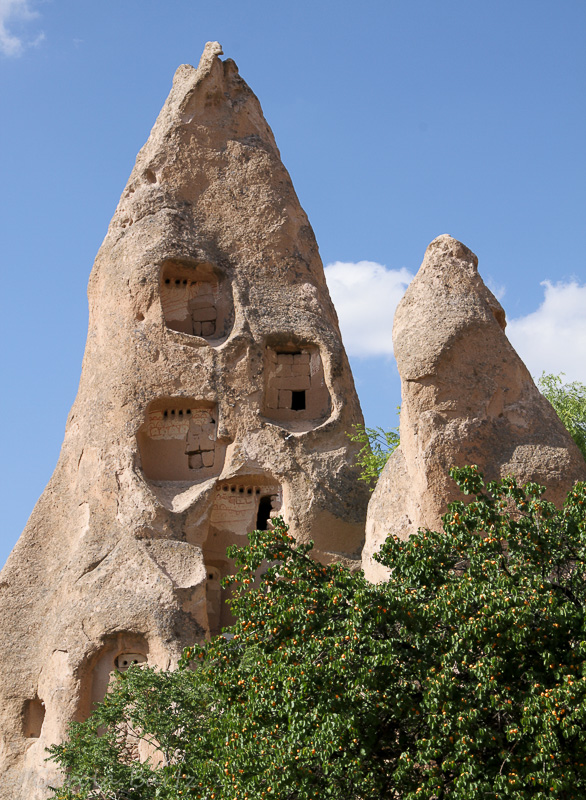 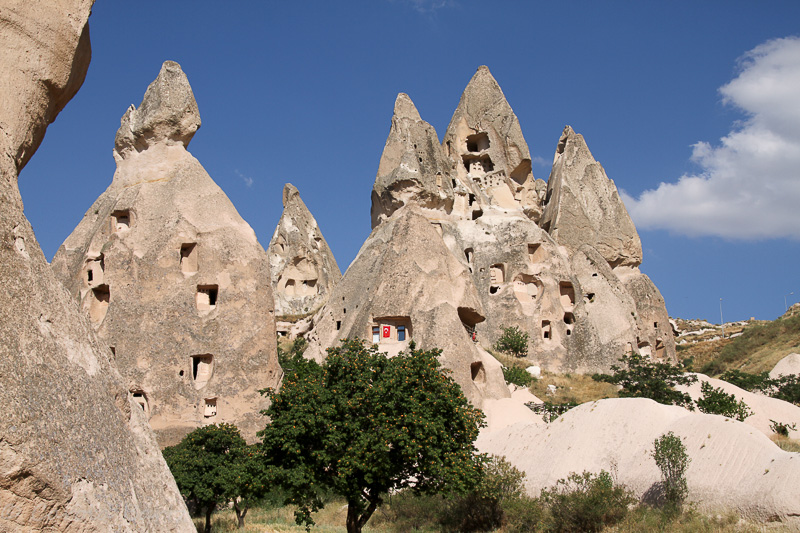 Many of these "cave houses" or "cave apartments" are deserted today, but some are still inhabited. We could see signs of life everywhere. These places offer coolness in the very hot summers and seem to be reasonably warm in the cold winters (yes, it can snow here). I'm not quite sure whether I would like to live in such a cave, however, we did stay in a cave hotel in Göreme and it was pretty awesome (more about that in a later post). 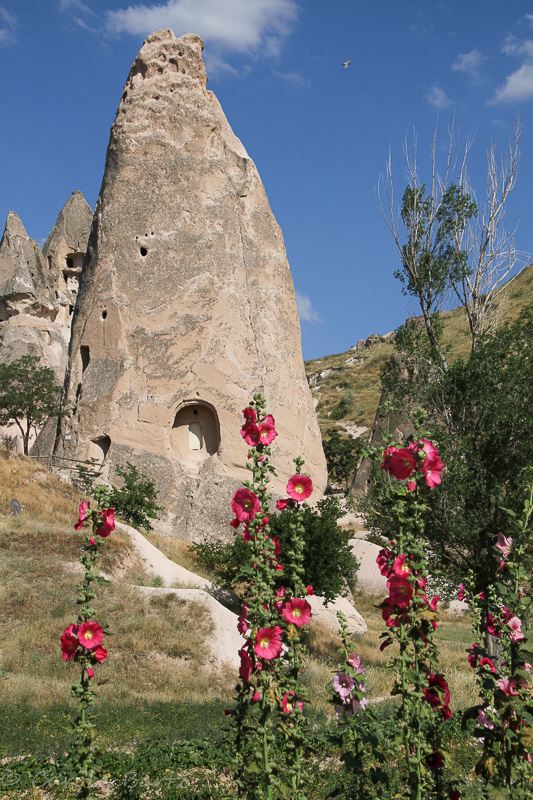 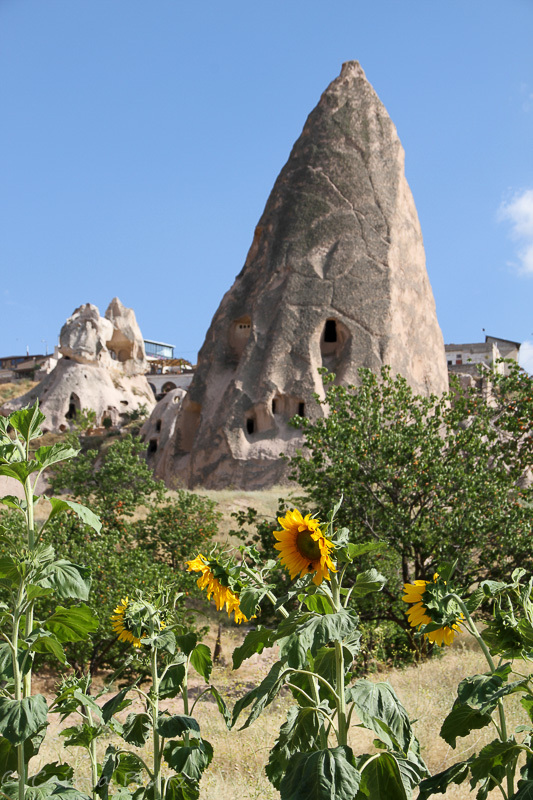 Most of these photos were taken in Uçhisar, about 5 km from Göreme. All at once we saw these fairy chimneys rising in front of us. I just wanted to stop and explore. So we parked the car and walked down into a beautiful valley from where we could see dozens of these unique housing units. It was our first real view of this area and until the end it remained my favorite one.

The rock has a slight pinkish hue that starts to glow at sunset. It is simply spectacular and a sight that I will never forget. Except for fruit trees (apricots!) and olive trees there isn't much shade here and the sun burns down mercilessly. But you almost don't feel bothered by the heat in this other-worldly landscape. 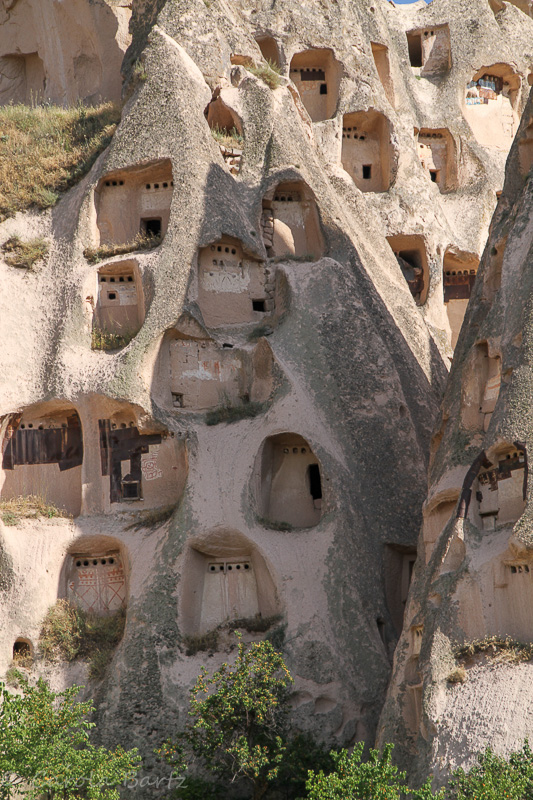 Can you see all the "apartments"? 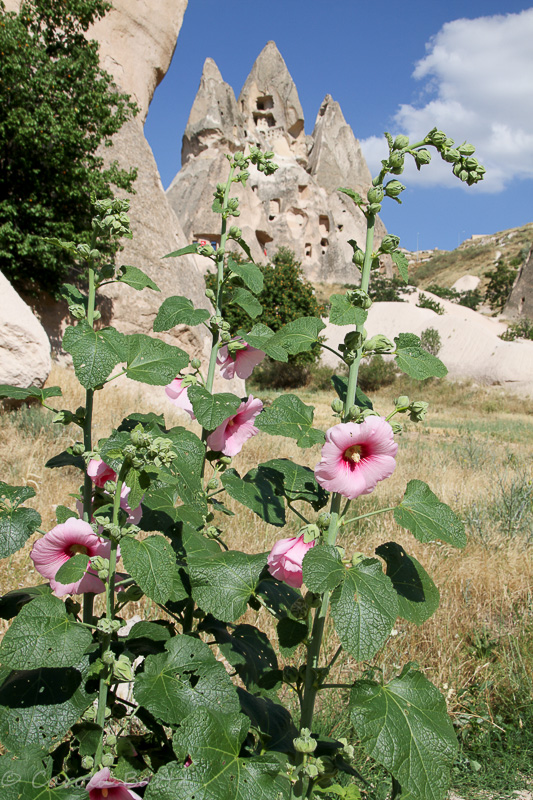 My partner loved that area (as he did all of Turkey that he saw). His photos and yours fill me with loving. The hollyhocks are special too.

These are remarkable formations! And yes, they do look like fairy chimneys. What a wonderful thing to experience these first hand!

Wow! These homes are amazing! It fascinates me how people have adapted to their environments. Nature really provided something unique here. I love that some of these have been modernized with windows and doors to be inhabited today.

This is amazing! and more astonishing is that few of those cave apartments are still inhabited.

How amazing and amazing!!!
Thank you for sharing such interesting photos.

Wow, these rock formations are incredible, and how they made apartments out of them is amazing. Not sure if I'd want to be at the very top, Yikes! Yes, they do look like fairy chimneys! I'm curious now what they look like inside. So interesting, and awesome pictures, Carola.

I've never seen anything like this ... what an amazing part of your wonderful trip!

I would like to visit there. I read that Christians found refuge there long ago. I wonder about sewage issues and water sources. Quite beautiful and rather spectacular overall.

What an amazing experience this must have been. I had never heard if this region. What was it like travelling around Turkey in a rented car? Did you feel safe? Were you able to find places to stay at night without difficulty?

That is amazing, WOW! I can't believe people live in them.

These are fascinating Carola. What a unique place to love. And to see. Cool!