A Hike on the Cliffs 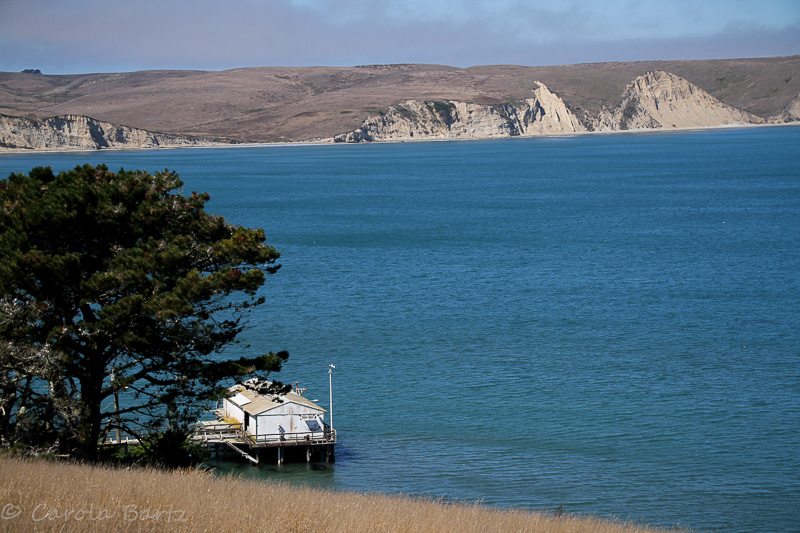 Last Sunday the Geek and I decided to drive down to Point Reyes National Seashore - it's such a beautiful gem right at our door step. Point Reyes is a peninsula in Marin County about 35 miles from our home, a beautiful drive along winding California Highway 1 with many stunning views along the way. To the east Point Reyes is bounded by the San Andreas Fault which caused the peninsula to move 21 feet to the north in the 1906 earthquake. The Point Reyes Peninsula is on the Pacific Plate while the rest of Marin County is on the North American Plate. There is an Earthquake Trail which describes the geology of that area. 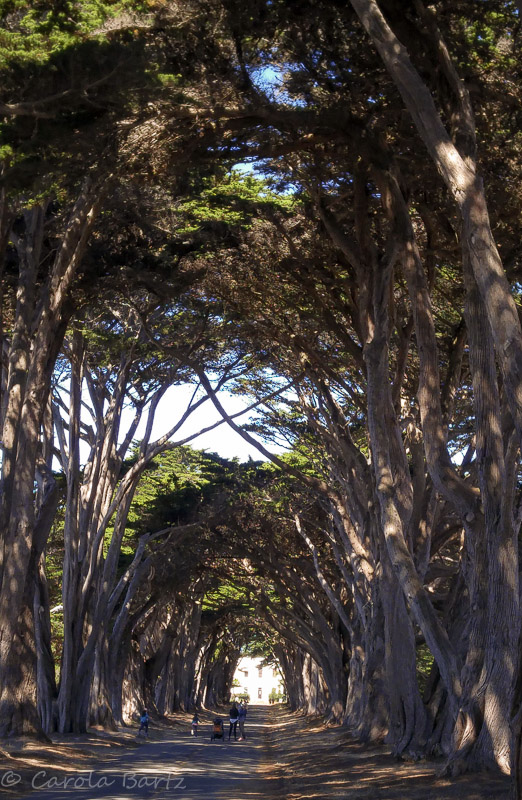 We had planned to visit various places on the peninsula like the Cypress Tunnel in the image above. We also wanted to hike and had chosen to walk out to Chimney Rock at the very end of the peninsula. 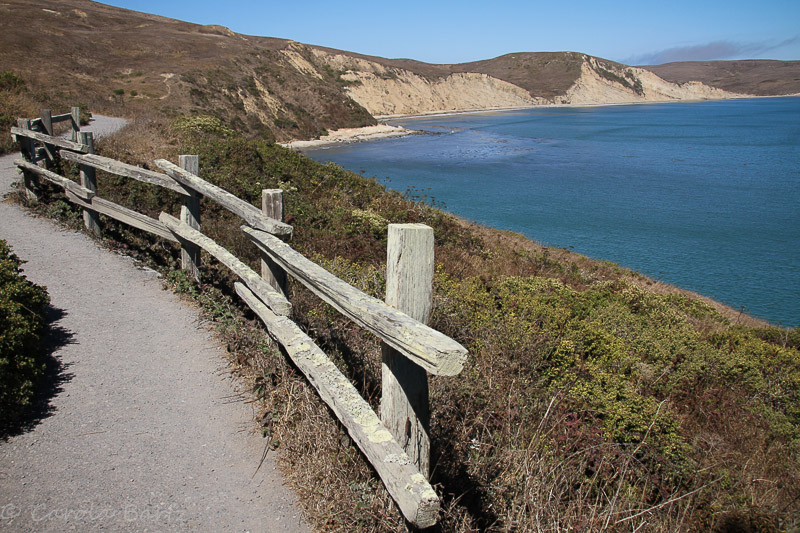 We first went over to the Elephant Seal Overlook which is an easy walk of just a few minutes. Every year from about November to March elephant seals gather on Drakes Beach and spend the winter here. However, there were only about ten elephant seals here swimming in the water (and making quite some noise) whereas the harbor seals populated the beach. We enjoyed watching the pelicans who were busy catching fish in the water. 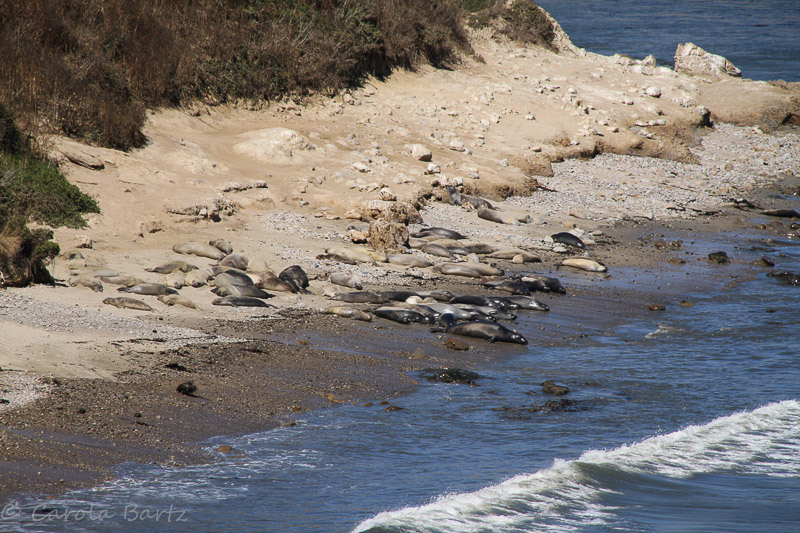 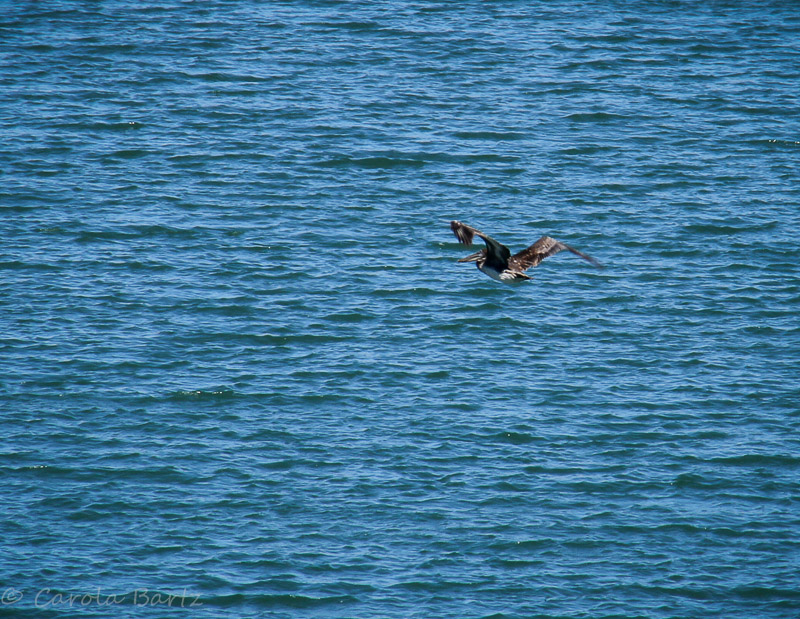 Finally we were on our way out to Chimney Rock. 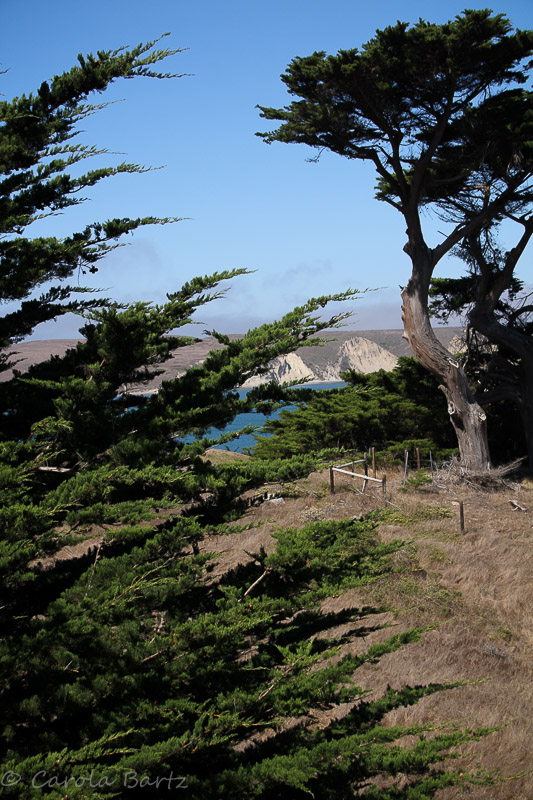 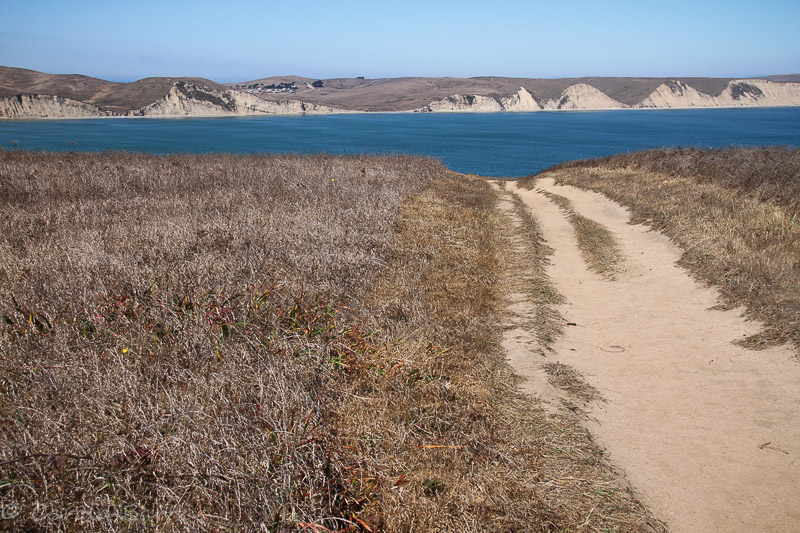 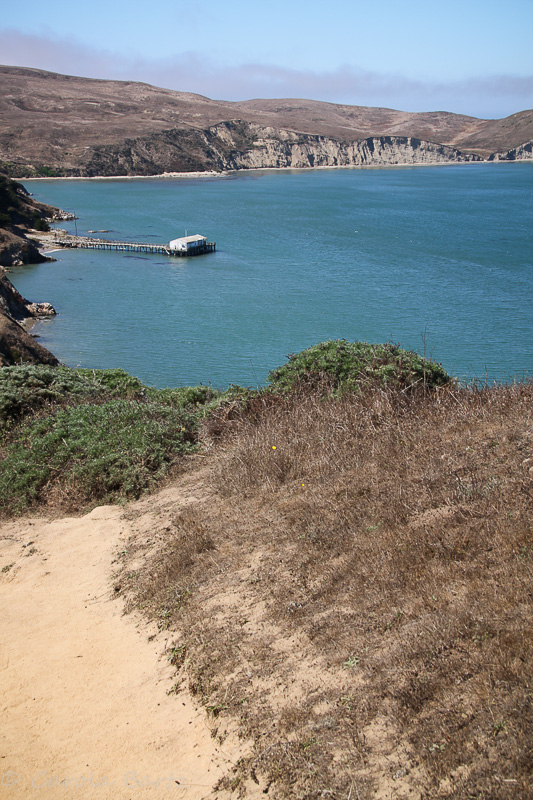 It's a moderate hike along an often sandy trail over the cliffs. It was a surprisingly pleasant day at the ocean - sunny with blue skies, a breeze but not too windy and temperatures of about 65 F. Perfect for a hike at the coast. But as you can see in the image above, some clouds were already coming in. The weather in Point Reyes can be rather varied. While it is sunny and warm at one end, it can be foggy and cool at the other one. This is coastal Northern California for you. 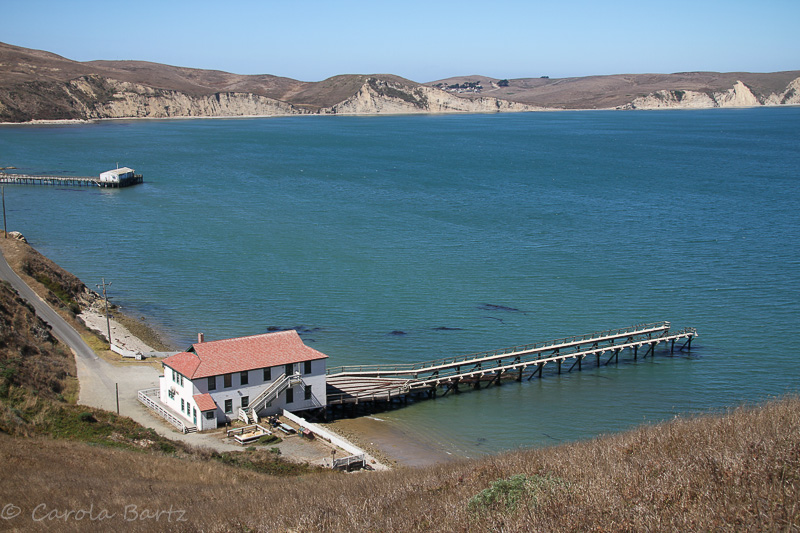 We saw the old dock and life saving station in Drakes Bay. The latter used to be pretty busy because of the fast changing weather pattern and boats getting lost. On the open ocean side to the West there is a lighthouse that is currently under restoration. Before the lighthouse was established in 1870 (after a 15 years long dispute between the United States Lighthouse Board and the landowners over a fair price for the land) many ships ended up as wrecks at the treacherous coastline. This is what the coastline looks like - dramatic, fascinating and dangerous. In 2015 new fissures in the cliffs were discovered and consequently trails close to the cliffs' edge were closed - which doesn't prevent the ever stupid invincible people from still walking there. 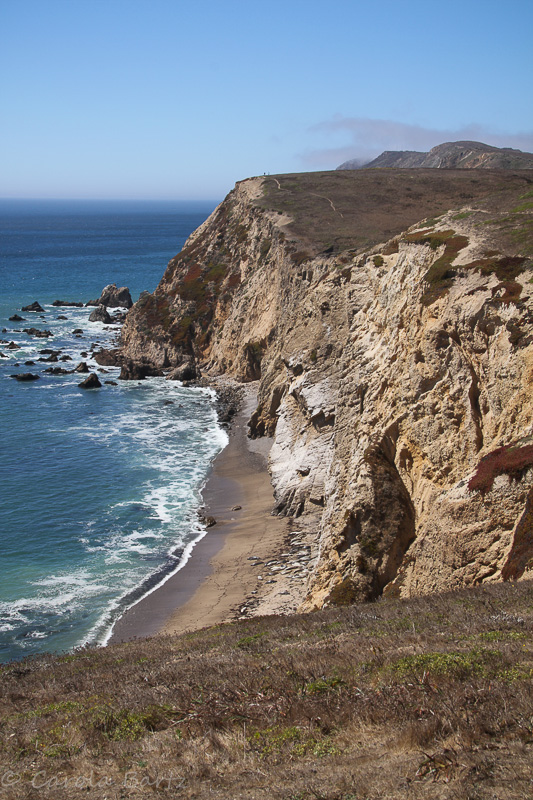 Almost at the end of the hike we turned around and took in the view from here. You can see the Pacific Ocean to the left and Drakes Bay to the right. You can also clearly see the trail we hiked along. This part of Point Reyes is an excellent location to watch whales - in the winter and early spring for the Grey Whale migration and with a bit of luck you can see Humpbacks all year round. 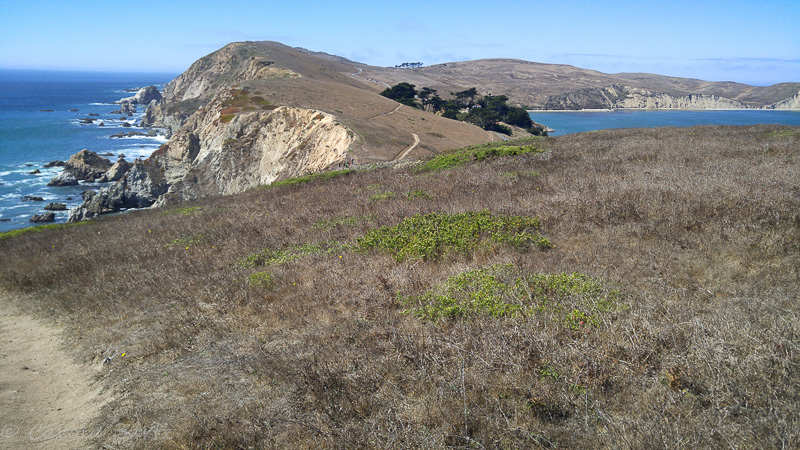 The view down from Chimney Rock was just as dramatic as the view back. 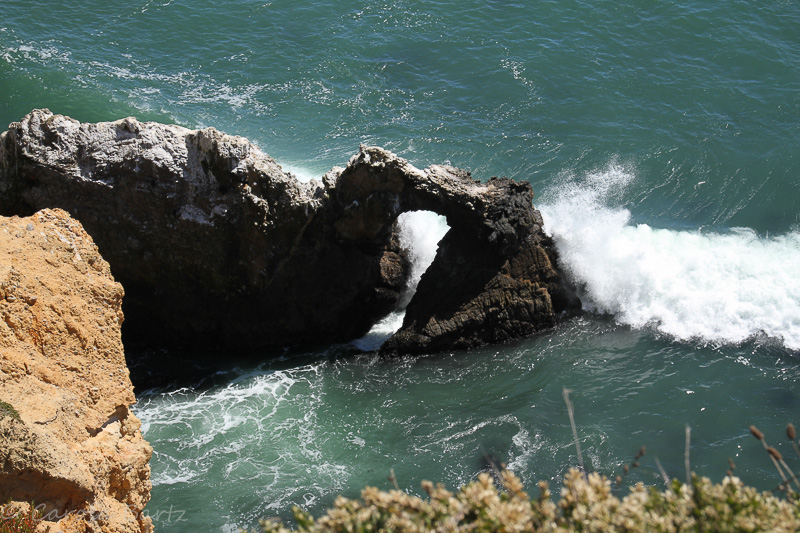 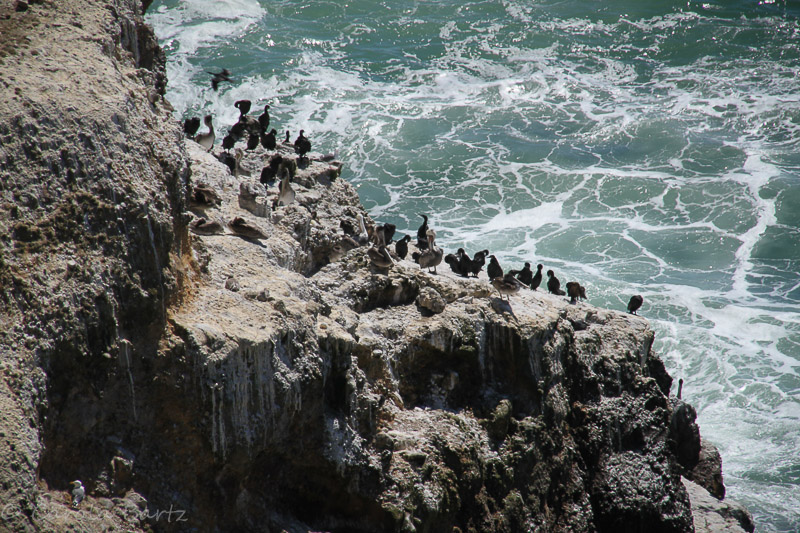 We sat on a bench in the sun, listened to the crashing of the waves against the cliffs and enjoyed watching the sparrows. The world felt very peaceful here. 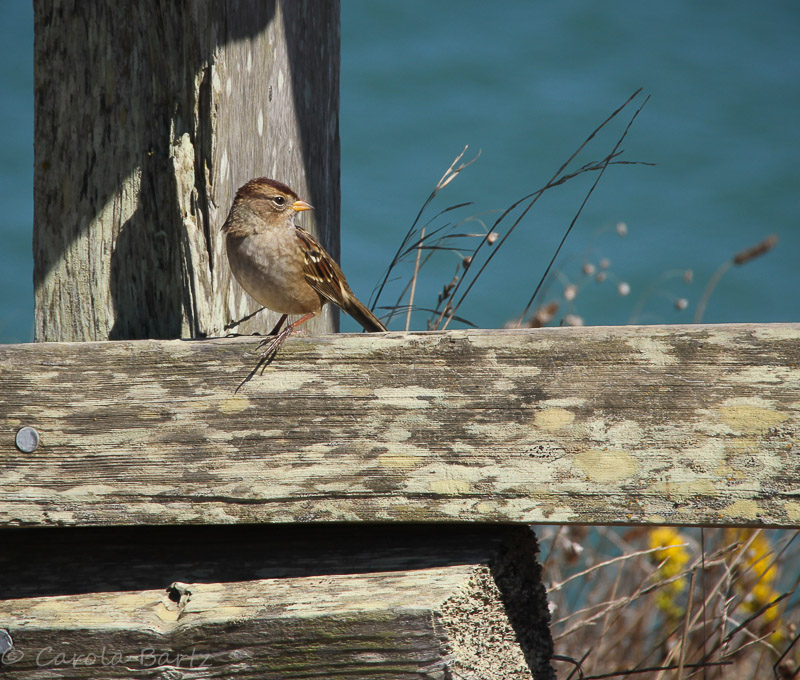 Absolute heart-balm. Thank you so much.

What better place to take a hike than along the beautiful coast? The pelicans are such a unique and grand bird. I've heard of Point Reyes before, but never been. I'm wondering if there is surfing there? I love the picture of the cliffs and the coastline. I'm glad you had a wonderful visit there. Will have to go sometime. Lovely picture of the sweet sparrow. : )

The National Seashore at Point Reyes is one of my favorite places. I just told a friend who is going down the coast of OR to keep going until she gets there! Your photos make me want to go back. Thank you for your kind e-mail, Carola. We will be in CA Oct 8-15.

When we lived in the East Bay, Point Reyes was a favorite destination. We loved that we could find completely empty beaches that were SO peaceful. Thanks for reminding me of those days!

This is my first visit to your blog, Carola, and I've been rewarded by some amazing scenery. What a wonderful place for a drive or a hike, I enjoyed coming along.
Amalia
xo

Beautiful Carola! How long is that hike?

I have not been there for quite a while. Lovely to be reminded of the areas beauty through your wonderful images.

I am in AWWW!!! Thank you for such a breath taking post! Big Hugs and Much Love!!

That's a stunning area and your photos are magnificent. You are so fortunate to live near such a beautiful spot.

What a wonderful hike in a gorgeous area, I love that last little bird shot, but also all the great captures of the see and the cliffs!

What a great place to hike! I have never gone whale watching, it would be wonderful to catch a glimpse of one. The coast looks gorgeous!

Stunning! I love hikes - getting outdoors and enjoying the fresh air. Hikes like this one, though, with these beautiful views are truly a gift!

I've taken a look at a few posts I've missed recently. Oh you have some great weather to be outside. Beautiful photos from those walks. Hugs-Erika