Oh May - so many photos of flowers and plants in my garden. Every time I was out there I discovered something new that I had to take a photo of. It's a wonderful month in the garden.

And of course it's the time of the poppy. Not the California Poppy but the Papaver. 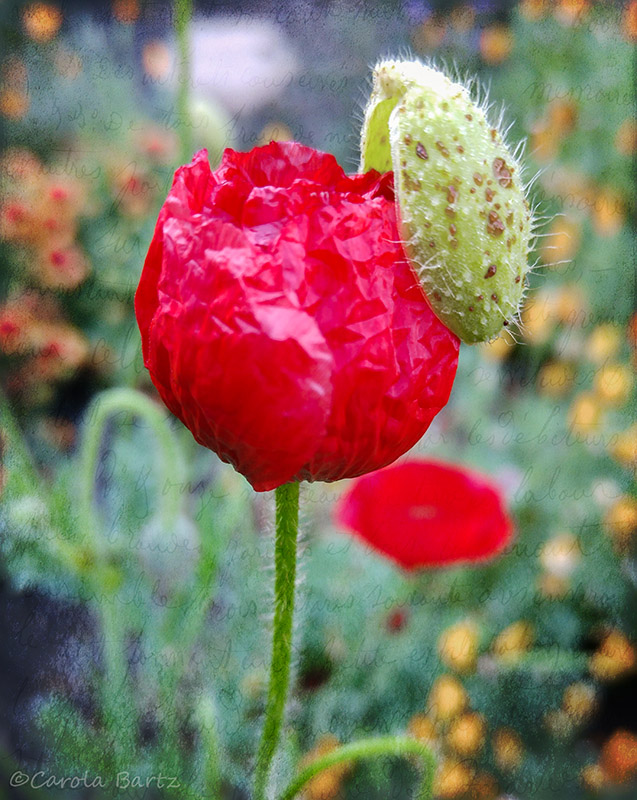 There was a time when I had an abundance of Papaver poppies in my garden. In fact, there were so many that they were smothering other flowers, taking away light and water. It had reached a point where I said "Enough" and pulled out the poppies as soon as they were gone. As a result I'm having less poppies in my garden this spring. These, however, do the "poppy thing" and pop with their brilliant red.

They always remind me of Germany. They are flowering a little bit later in the year than here in California due to a much harsher climate. But when they do it's breath taking. Fields and fields of green (grass), red (poppies) and blue (bachelor's buttons or cornflower) with the red playing the dominant role. I've loved them when I was a child and I still do. It's something I miss here - but then we have the fields of orange poppies in the spring which are stunning as well. They just don't carry all the memories the red poppies do.

Even the name is beautiful. We call this flower "Klatschmohn" for which I can't offer you an adequate translation. The dictionary says "poppy" which of course is correct, but it doesn't completely reflect this special name. It's just another one of those German words that are impossible to translate.

This particular poppy in the photo showed its beauty one morning when I did my first round of the day through the garden. A completely new flower, just having escaped its green shell/skin, not yet opened to the light. It will not take long until the bees will discover this new kid on the block and buzz around it.

Email ThisBlogThis!Share to TwitterShare to FacebookShare to Pinterest
Labels: An Image and Its Story, garden, Germany, memories, poppies

It is a magical time of year isn't it? Full of beauty, of vibrance, of life - and of memories.

Definitely a lovely flower the Poppy is. And what a unique picture this is today.

Your heart and your eye are in sync. Just lovely.

The poppies are beautiful. I love your description of the field in Germany full of red poppies, green grass, and blue cornflower- I can see it in my mind and kind of wish I were there right now! What wonderful memories.

This is such a great time of year with everything in bloom. Lovely photo.

I love the red poppies too and this is a wonderful image. They speak to me of joy.

I remember poppies everywhere I have traveled and seen them. They are a beauty to behold.

Gorgeous flower! It's amazing how some plants can become too much!! Big Hugs!