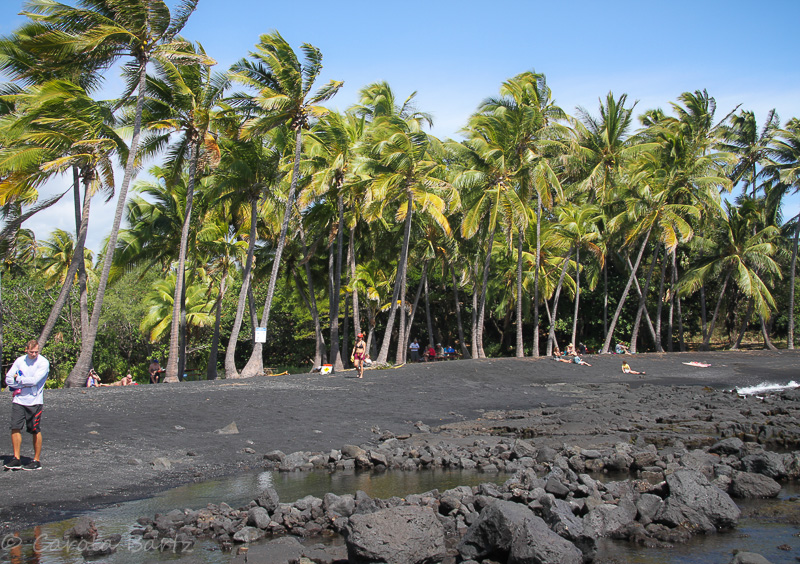 For obvious reasons my thoughts are on the Big Island a lot these days. We are in contact with the owners of the Avocado Tree House and know that for the time being they are safe - if you can ever be really safe, living on a volcano. Their organic farm is just beyond the East Rift Zone toward the ocean and the nearest fissure is about three miles away, but the lava is flowing in the other direction (downrift and farther into the lower East Rift Zone). As of today there are 15 fissures in Leilani Estates and neighboring Lanipuna Gardens. My heart breaks for the people who have already lost their homes to the lava.

I thought that today I take you to the other side of the volcano, toward the west. We had heard about the black sand beaches but never visited one back in the summer of 2016. This time, however, we discovered Punalu'u Black Sand Beach. It's almost like a regular beach with the slight difference that the sand is volcanic and therefore black and there is a lot of lava. After all, we're almost at the foot of the volcano, near the South point of the island.

Of course there were lots of palm trees, and as usual it was a bit windy, but otherwise a gorgeous day. 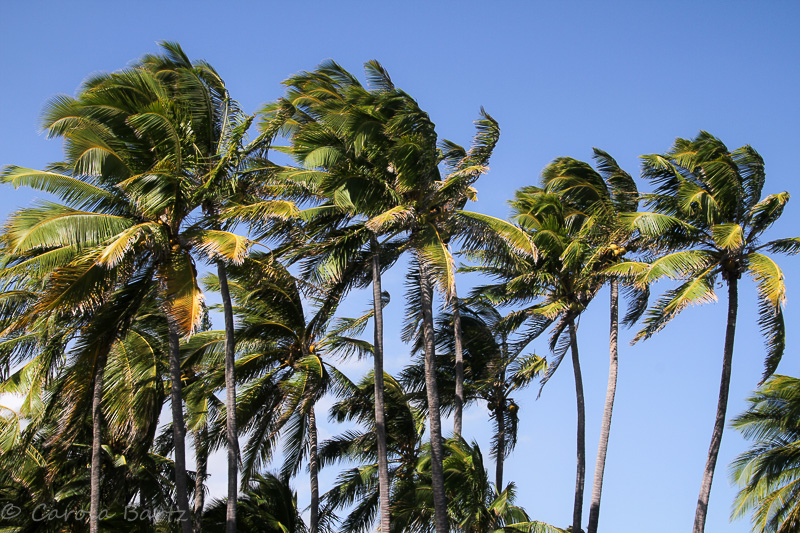 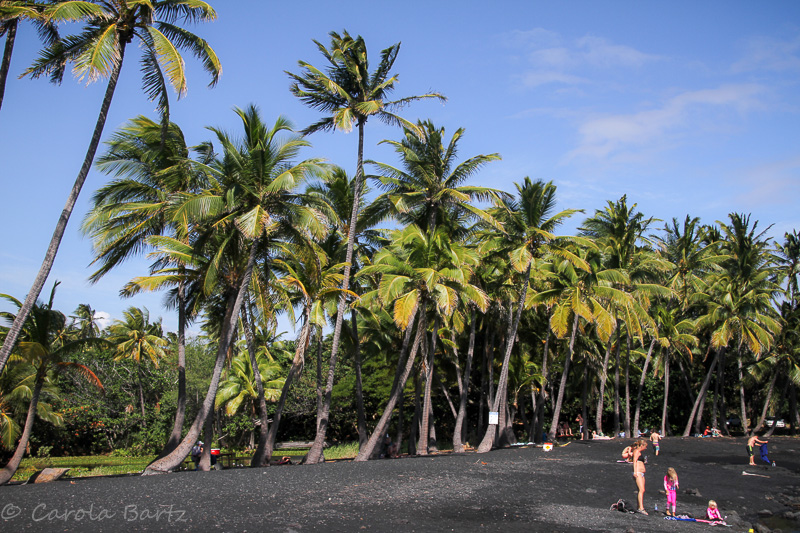 We could sit on the lava and look out toward the ocean, watch the waves break against the rocks. 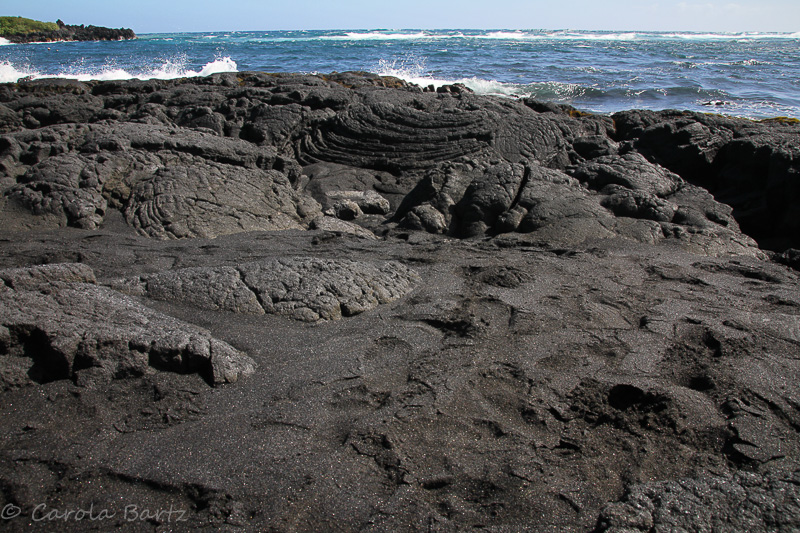 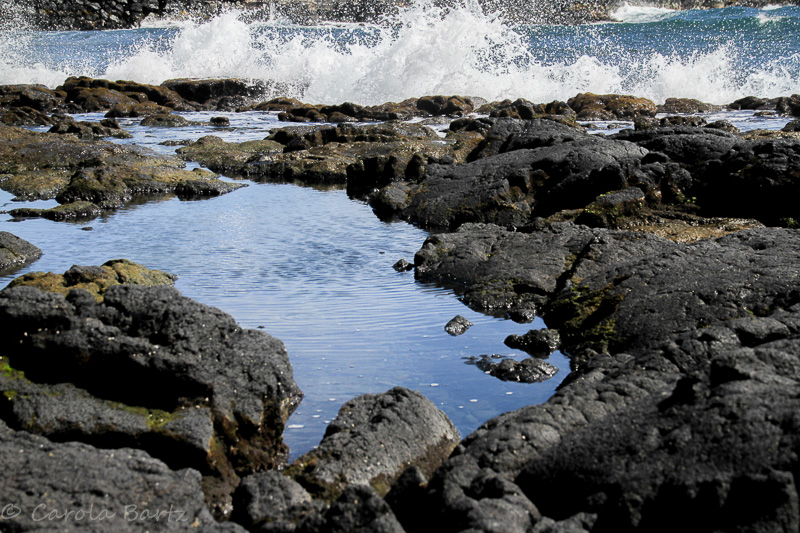 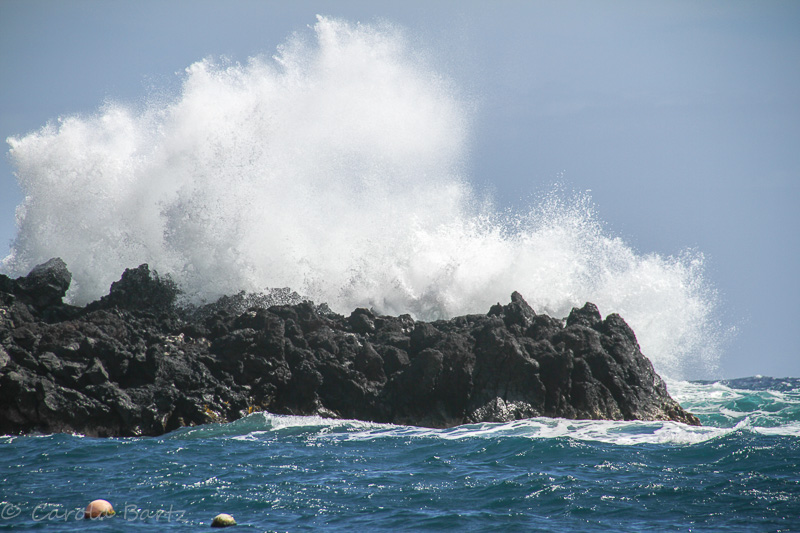 The sand was - indeed - black, coarse and there were some sparkles in there as well. 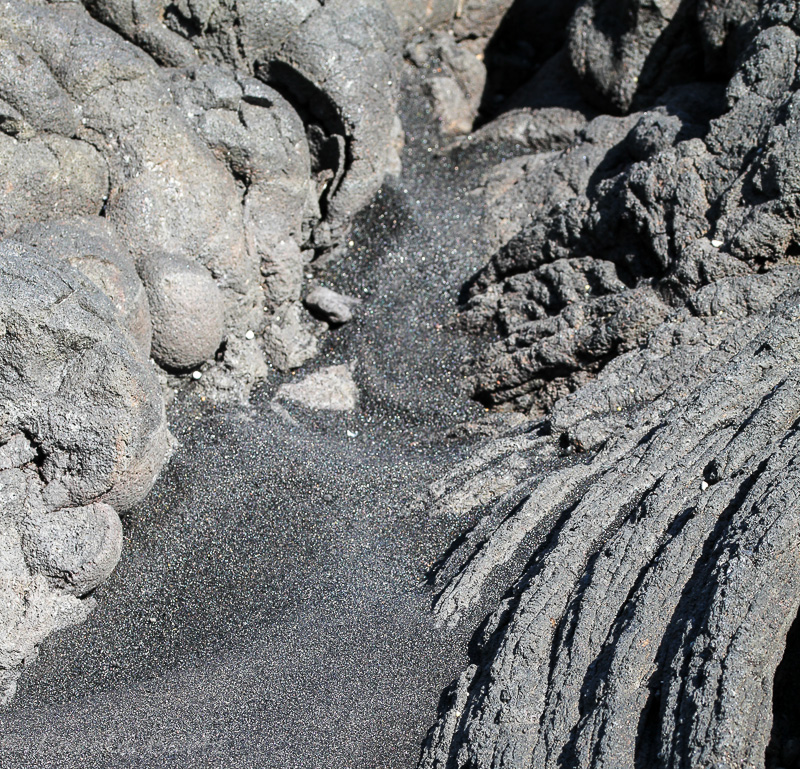 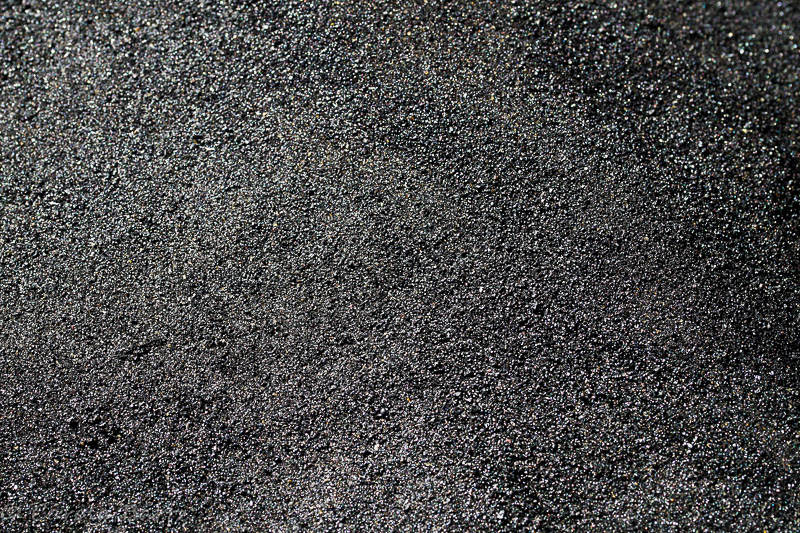 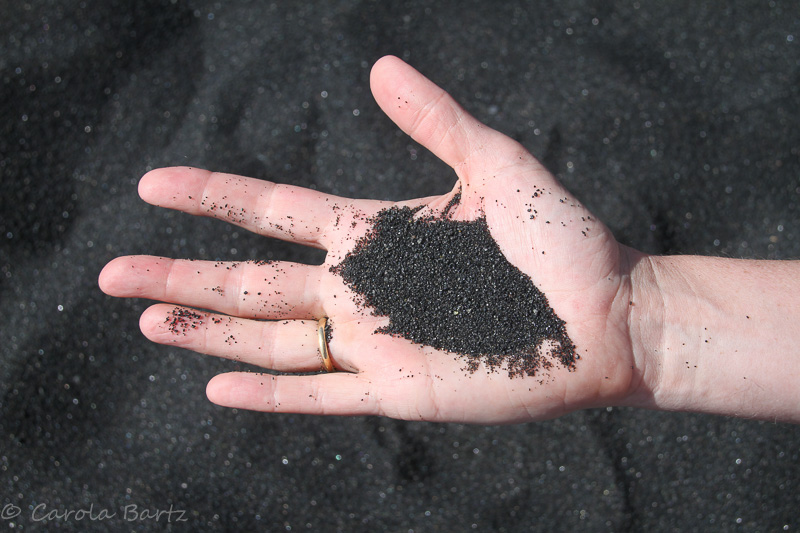 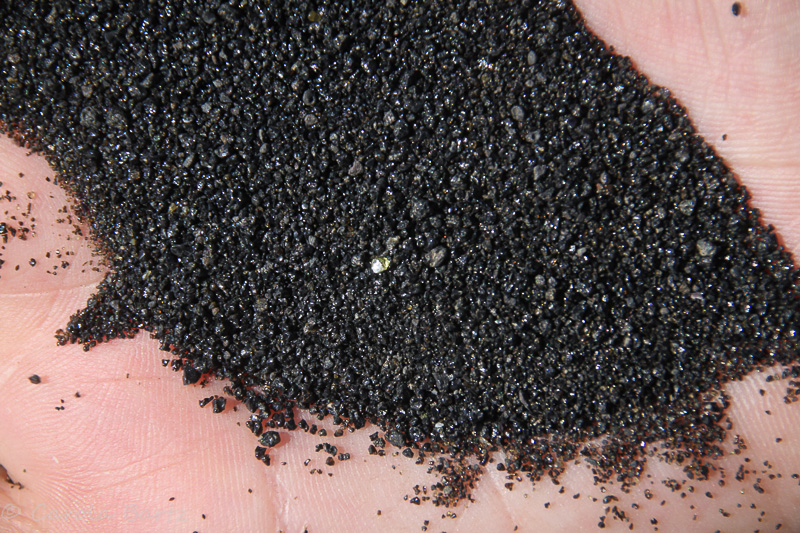 I couldn't stop taking pictures of the tiny beach snails. They were clinging onto the lava everywhere. 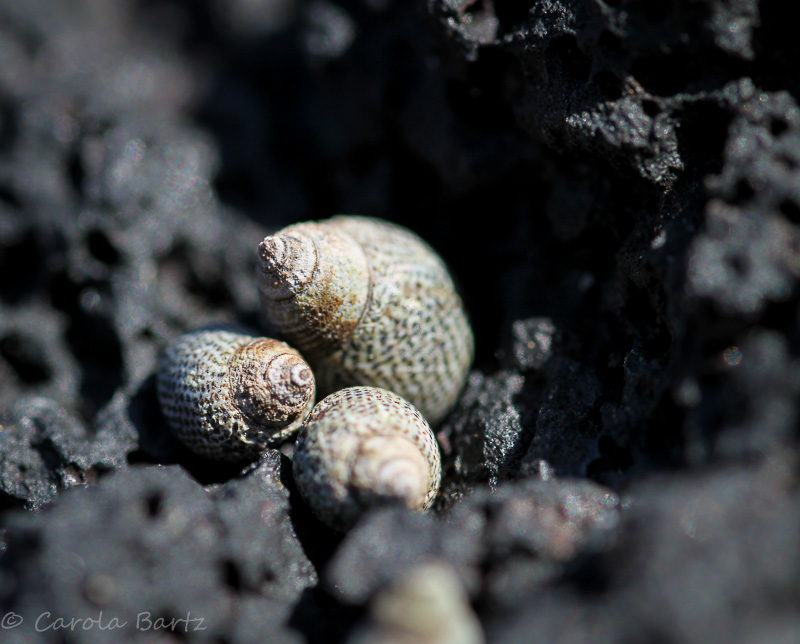 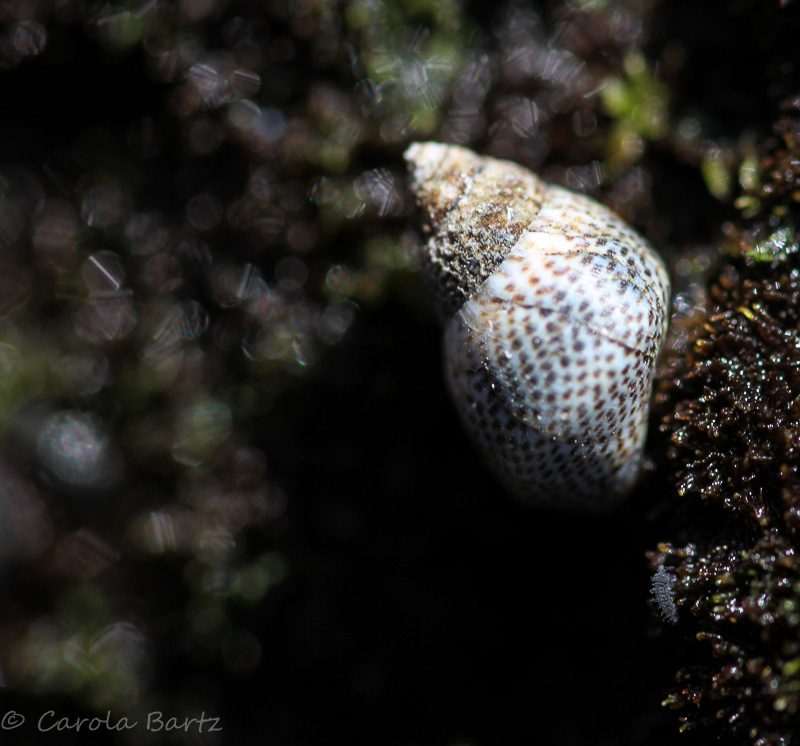 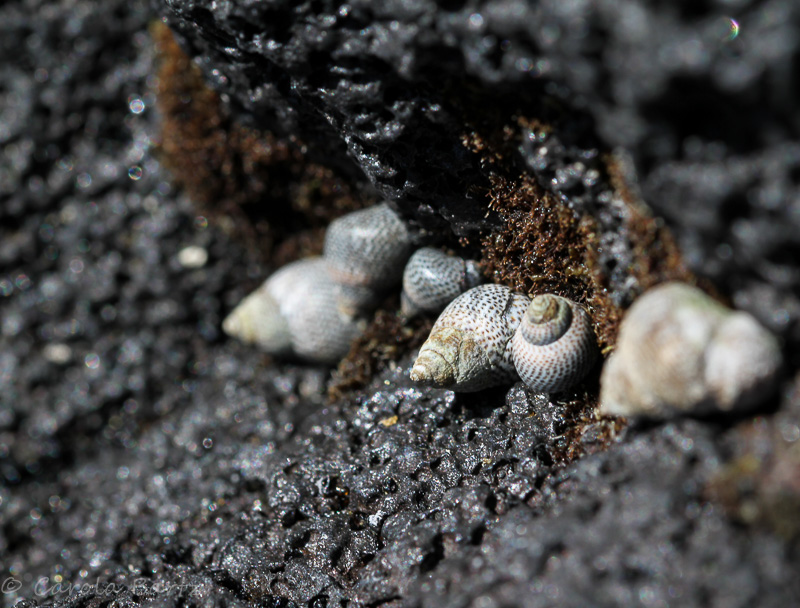 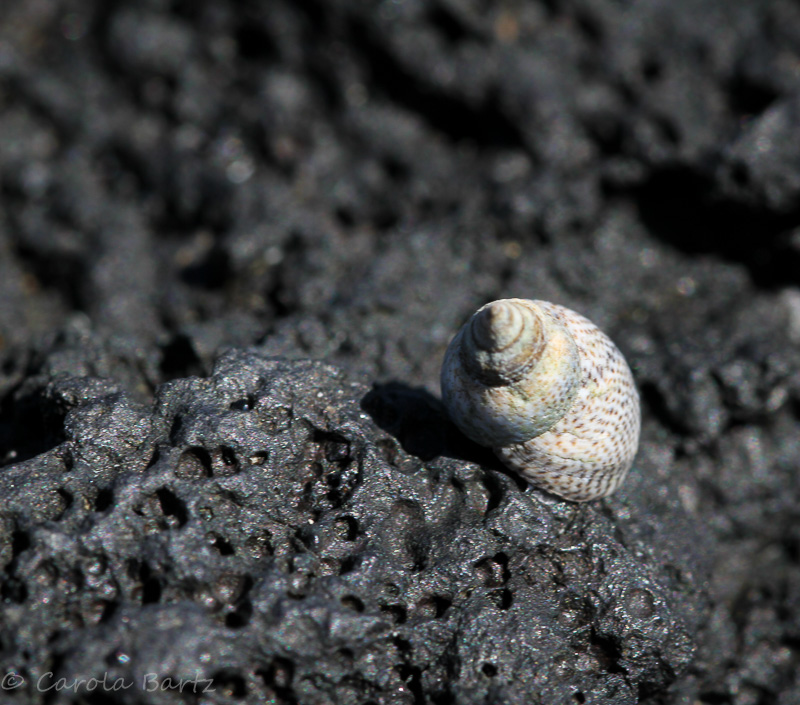 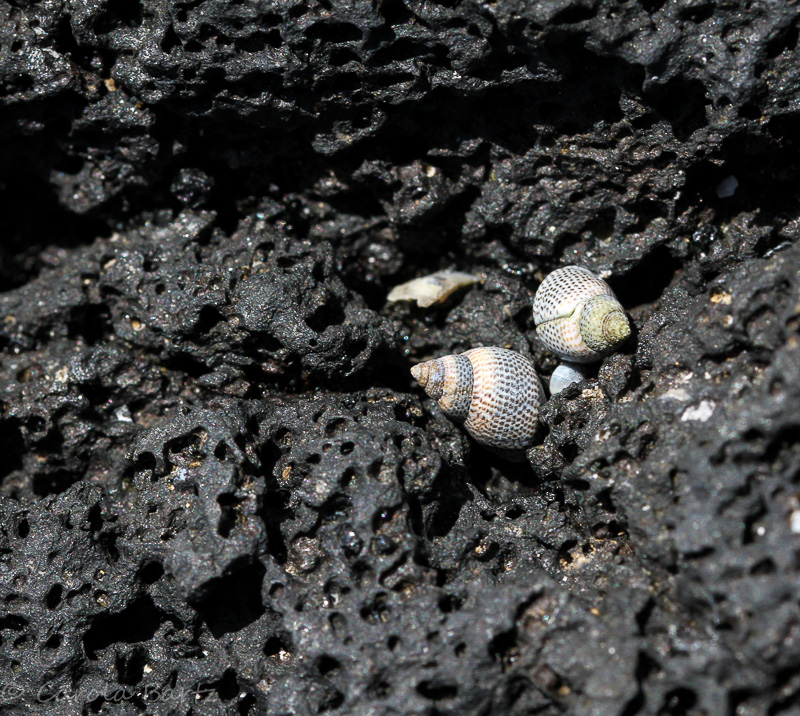 We watched a black crab crossing the lava - sideways of course. Yes, even the crabs were black! And then there was this bird - I assume (but am not sure) it's a Stilt Sandpiper in winter plumage. I observed it for quite a while. Since this is Hawai'i, there was also this on the beach - a rescue surfboard! 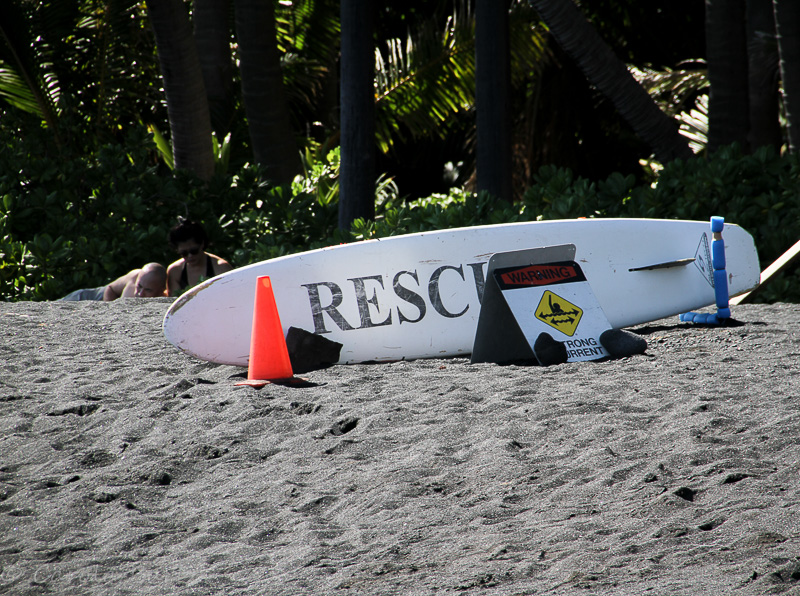 I didn't mention the palm trees, did I? 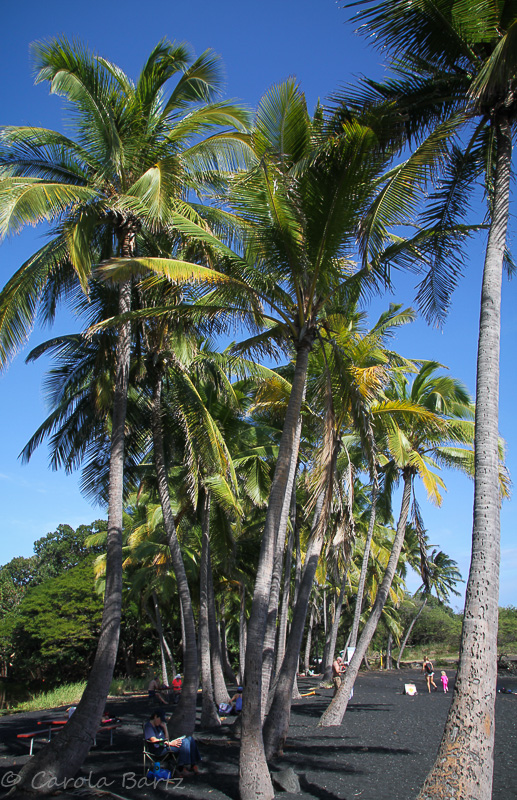 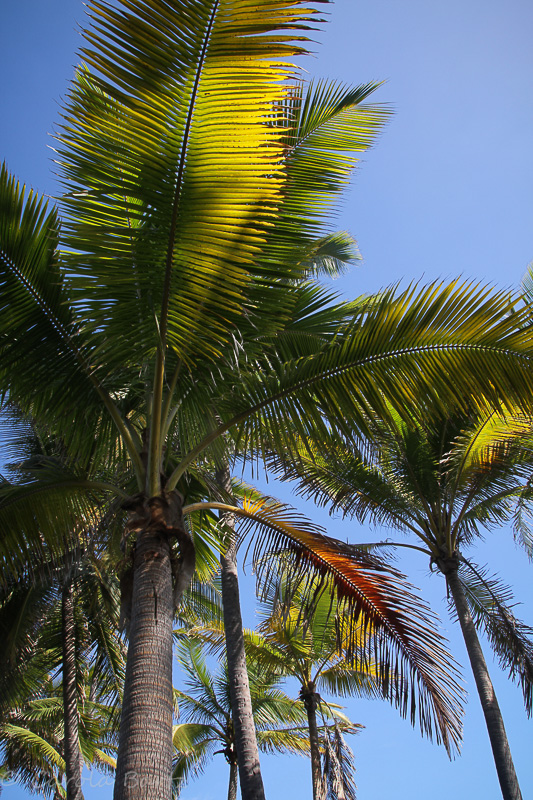 And then we saw this: 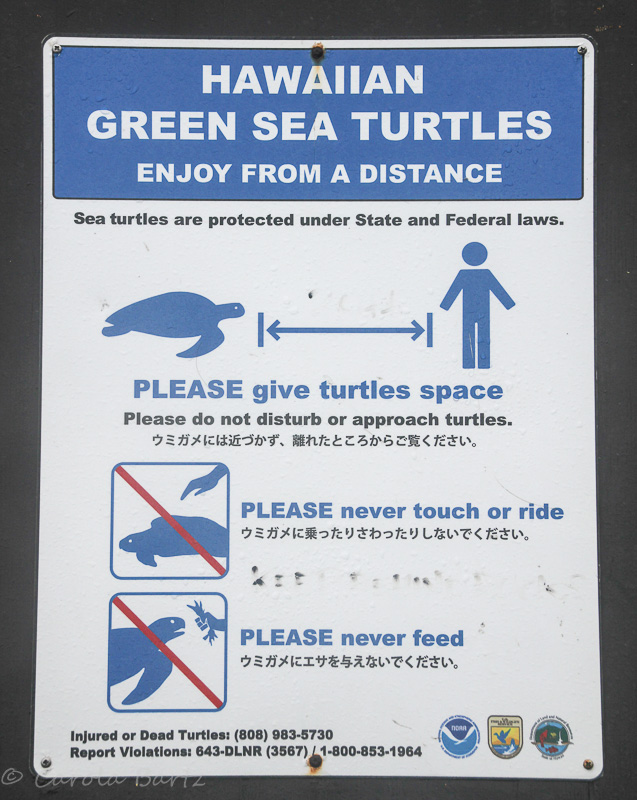 But where were they?

We found them a couple days later. 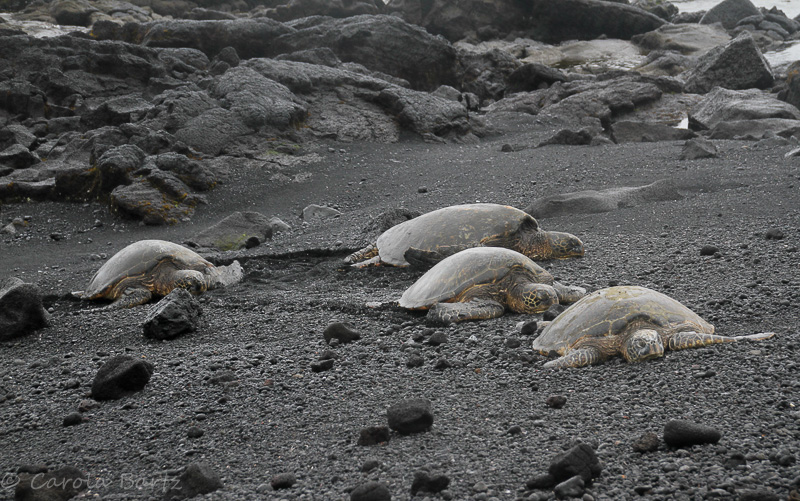 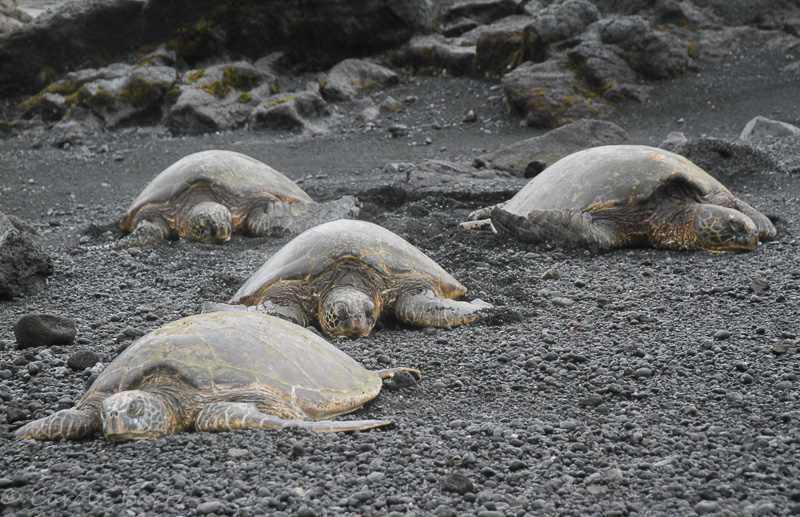 They were super calm and didn't pay any attention to the picture taking humans. Thankfully no one got too close to them, everybody gave them lots of space. 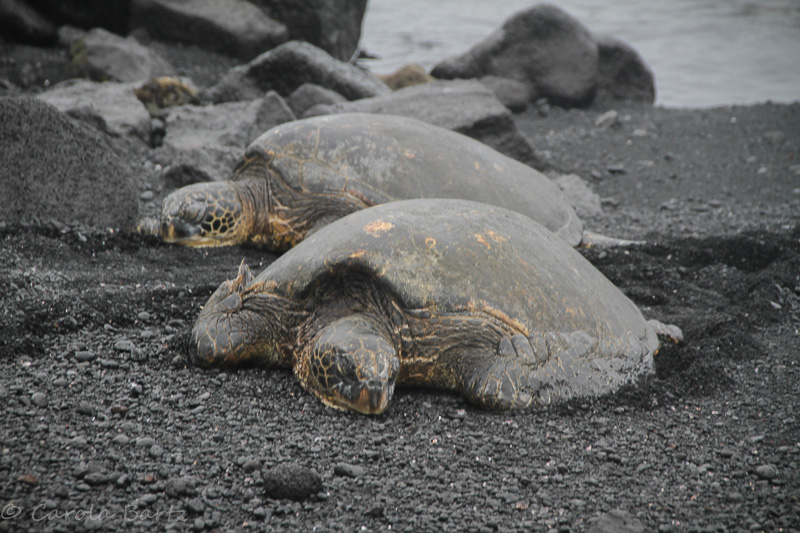 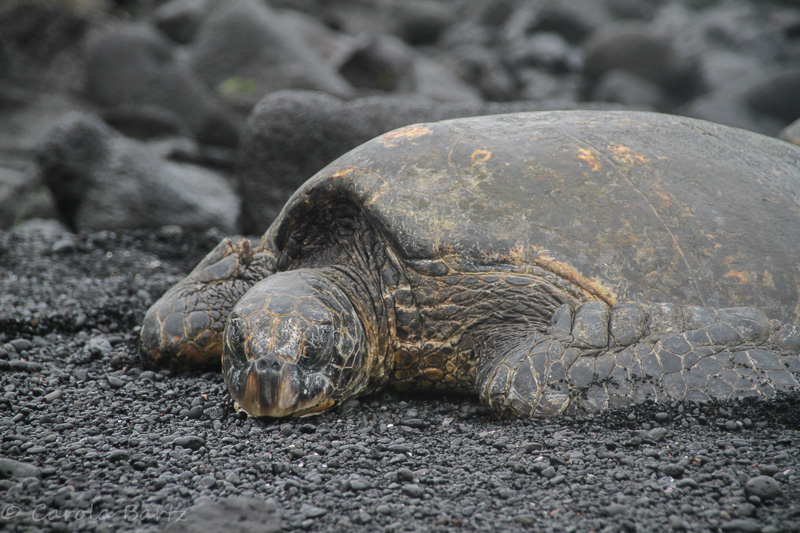 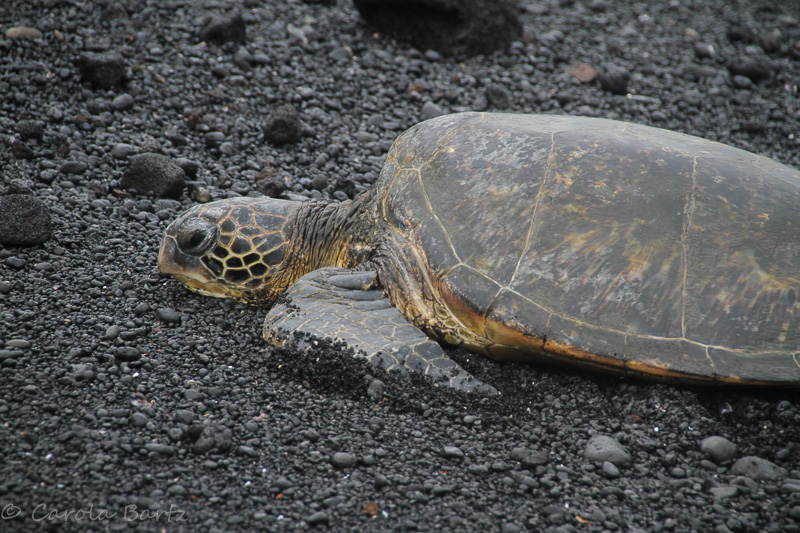 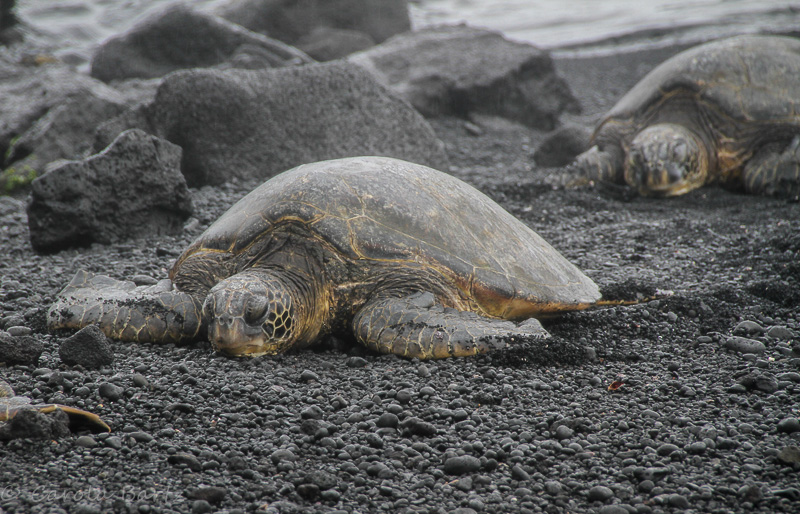 I could have watched them for a looong time. 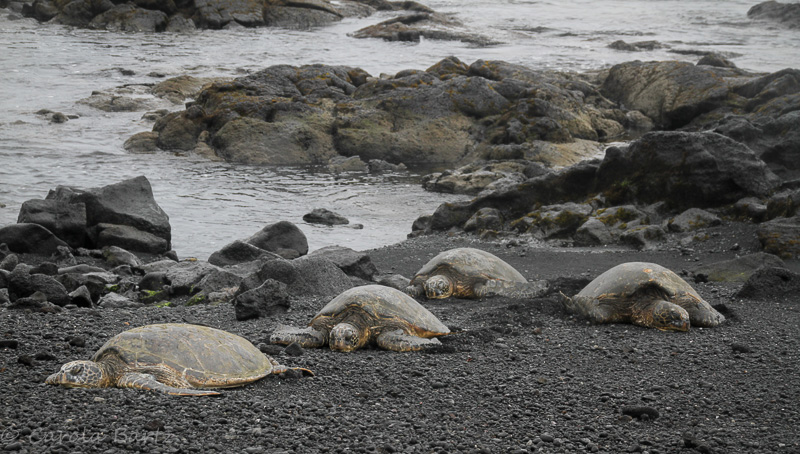 Awesome Hawaii!! Hope I can go there again..

LOVE the turtles, the sand, the snails, the sea....
And so glad that your friends are safe. For the moment - which I hope lasts a long, long time.

This is just fascinating. I love those turtles -- would give anything to see them. And those snails are beautiful. What an adventure!

The black sand is fascinating - and I love the sparkles. The sea turtles must have been so interesting to watch - I've never seen one in its natural surroundings.

Wow- not only beautiful but those green sea turtles are amazing! I know, they are waiting for a big blow, not the usual. Hope everyone stays safe, but I did enjoy your photos. Happy mother's day to you Carola. Hugs-Erika

Hello Carola, it was great seeing this part of the island and it was also good to read that all was well with your friends at the Avocado House - I remember your previous posts. To see photos in the news of that lava flow was incredible and, yes, hearts go out to the people affected.

The black sand and its creatures are amazing. I loved seeing those sea turtles too.
As always, your photographs are wonderful. I loved those tiny shells in the lava.
Cheers now :D) xx

The turtles are so interesting. I would have stayed a long time to watch them too.

Truly amazing! Wow!!! Thank you for such beautiful photos! I would have watched the turtles for hours!!! My prayers go out to the people there right now!!

Thank you for taking us to Hawaii today! I hope your special place stays safe. The black sand and palm trees are beautiful, so is the black crab (Can crabs be beautiful?) I have never seen a green sea turtle hanging out on the beach. In the Caribbean, I have only seen them swimming. Wonderful photographs!

Those turtles are beautiful! and I love the tiny snails ... thanks for another awesome visit.