In November I got all the photos of the beautiful fall leaves and colors that I missed so much in October. I enjoyed the many vineyards that were competing with each other for the most brilliant color; the trees were spectacular this year as well. It seems that after the terrible events in October, November was extraordinarily beautiful.

And still - the photo I chose does not reflect my favorite season, but a remains of the fires. 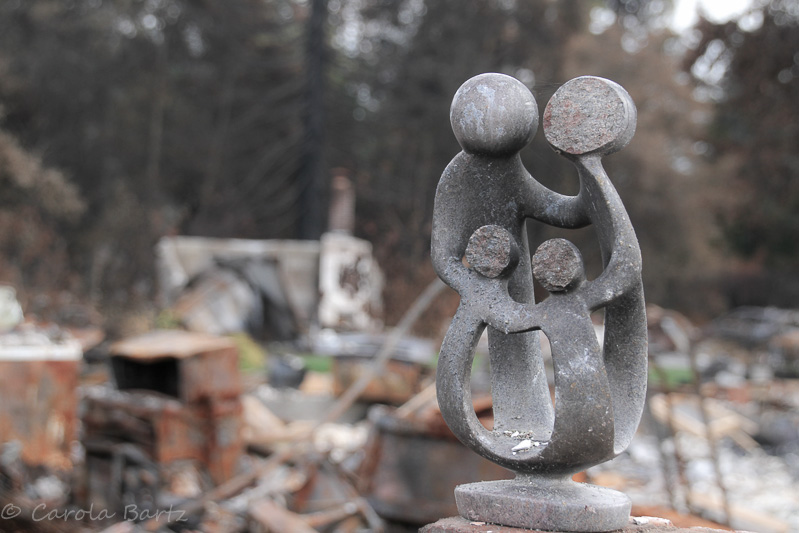 Of all the pictures I took in November this is the one that moved me the most. I took it in our old neighborhood that was destroyed by the Tubbs Fire in the early hours of October 9th. I had picked up Kaefer from college on Thanksgiving morning, and when we arrived in Santa Rosa she said that she would like to see her childhood home - or what is left of it - right now. I know that she was nervous and we were both very quiet when we drove up the hill through the Fountaingrove neighborhood that resembles a war zone. Then we turned and drove down into our old neighborhood where we could see over the entire valley, filled with rubble and ash and lonely chimneys. We stopped at our old house and then saw that our then-neighbor from across the street was there - he always has been some kind of substitute grandpa for Kaefer. This meeting took out the dark mood of the moment, and we were happy to embrace each other and talk about the happenings of that fateful night.

It was when he left and we walked around a little bit that I saw this stone sculpture. I am positive that it wasn't there the last time I was up at the house. Someone had placed it on the remains of the brick wall of a neighbor's house. I assume the people who had lived there had found it in the rubble and put it up there. Its broken, raw beauty made such a statement in the devastation - no matter what happens, if we have each other there is love and hope.

I have no words for this scene and story. It was so moving. Thank you for sharing your experience.

Moved to tears here.
And hoping that love and laughter continue to define you.

Carola - how moving your story is. Your photo tugs at my heart. I wonder how long it will take to rebuild what the fire devastated?

Hope remains even after tragedy, that what this says to me.

I like how Sarah interpreted your touching photo. There is hope.

You are so right, what a perfect statement to all that happened.

Your story is very moving, as is the sculpture that remains.

Amid all this rubble, your photo speaks of hope and love. I can’t begin to imagine all the emotions that come with this sort of event, but feel hopeful that good will result.

Carola, what a powerful photo. It just squeezes my heart so hard that I have no words. Thank you for sharing this beautiful symbol of love and hope rising from the ashes.

Captures so many emotions. This is brilliant and ought to be entered in a photography show.

They story and the picture make me cry.. :(

what a beautiful stone sculpture which shows a family getting strength from each other despite adverse conditions. A wonderful lesson of solidarity.

Your photo makes such an amazing point. The destruction of material things can be harsh but it cannot destroy the beauty of relationships. Here in So. CA we are currenty in the middle of 3 fires fanned by strong, gusty winds. These winds, which aren't expected to stop for another 2 days, only serve to fuel the fire through the our dry, parched land. Hugs and kisses for those who have or will be suffering loss due to fires.

This is all so sad! Such a tragedy! I love what you wrote at the end! So true! This image you shared with us, tells it all! Big Healing Hugs!

This picture symbolizes the memories you will always have of your home in Santa Rosa, and the precious family who lived there with you It's a beautiful photo, Carola, and very special, indeed.

I love your photo of that beautiful sculpture - so touching.
All the best Carola :D) xx