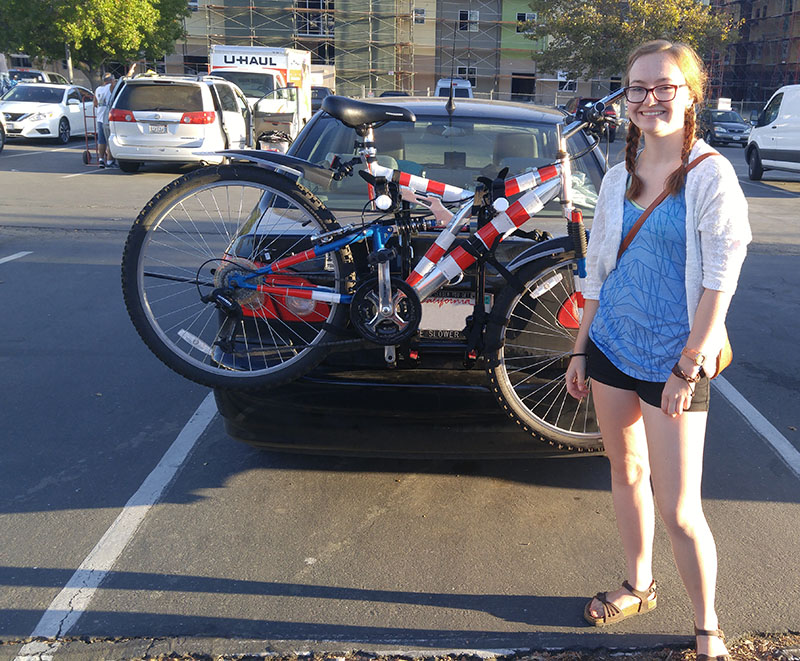 On Sunday we moved Kaefer into her dorm at UC Davis. Of course it was the hottest day - and hot at the edge of the Central Valley means really hot.

The move in was very well organized. We were there shortly before eight in the morning (yes, we left home early), she checked in, got her key, and when the residence halls opened at eight we started to unload the car. There were special unloading zones for each hall and each student got 20 minutes assigned to unload. We made it in about 22 minutes! I found a parking lot close by, and then we could start putting her things away, making her bed and decorating her room.

Her roommate hadn't arrived yet which was good since it would have been a bit crowded with two students and their parents, trying to get some order in the unpacking chaos. She arrived later in the afternoon when Kaefer was pretty much done. They have both met through the Davis Freshman Facebook page and over the summer in person when Kaefer invited her to her graduation party. I think they will be fine. 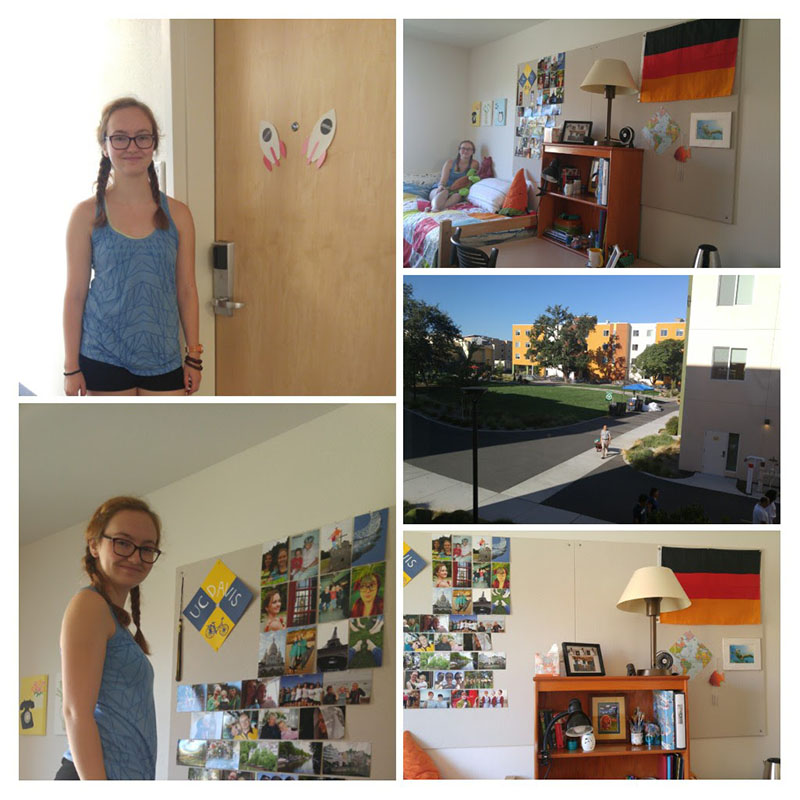 Kaefer is very lucky that she already knows a few other students, and that day I met another girl from her high school who lives on the same floor. In the afternoon one of her friends came by - she had a flat tire, and luckily we were still around so the Geek could give them a first lesson in independence: how to change a bike tire. It's a good thing to have a handy dad! 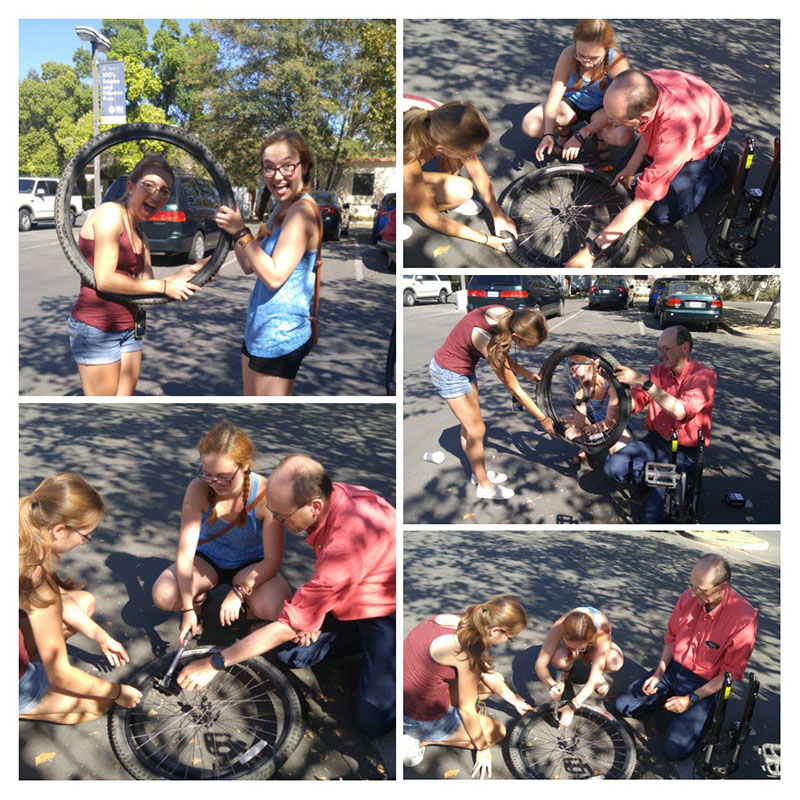 We finally left in the early afternoon when we had the feeling that Kaefer was settled in a bit and there really wasn't much more to do. To say that our good bye was easy would be a lie; but at least I managed not to cry. That happened later.

The first day without her was hard, especially in the morning. I always used to go into her room to say good morning, and sometimes we would chat a little bit, sometimes not. But yesterday morning there was only an empty room and I felt very very sad. The morning was just weird. I walked around like in a cloud, and my heart was aching. Fortunately I had a teacher meeting later in the morning and that turned out to be a good thing. The meeting lasted for almost three hours, and afterwards I went to one of my favorite nurseries. It was so hot, however, that I didn't stay long, but still managed to get a few plants that will look beautiful in my garden.

Even though I am still sad I've found my center again. I was happily knitting yesterday evening, sitting on the couch and listening to Native American music, feeling quite content. Kaefer and I had texted each other off and on throughout the day and I knew she was doing fine, but didn't like the heat. She was biking around campus, trying to find out where her classes will take place. Classes start on Wednesday.

I love her and I miss my goofy girl, but I am also so very happy for her. It's bittersweet. 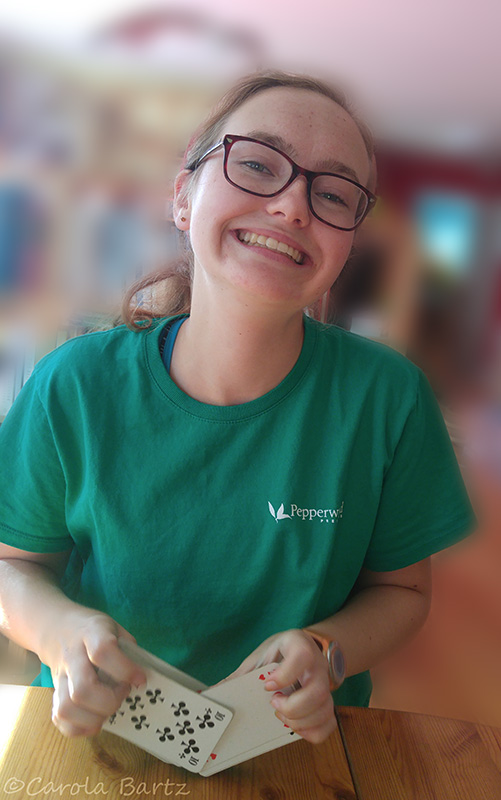 Aww...that must have been such a bittersweet day dropping her off at college.

I remember taking my daughter to college and getting her settled in, and how hard it was to drive away and leave her there. Congratulations to all of you for reaching this milestone! Best wishes to Kaefer and to you as you all adjust and settle into your new lives and adventures.

When my twins left to drive from PA to CO for their freshman year, I was so sad! I never ever saw their freshman dorm rooms. However, they had each other and though they had different roommates and were majoring in different subjects, they've always been best friends. I hope Kaefer makes some great friends and has a good experience at UC Davis. It's wonderful and gives you peace of mind that you can keep in touch by text. In the "olden" days, we had to call the boys or they called us on a hall phone!

It is a big step for both parents and children.Please don't be very sad, though I felt sad even when my little A went to playschool first day - house was empty... It is good that nowadays we have all those means of communication to keep in touch.
Your daughter will do just fine there, don't worry :)
have a happy day!

Oh Carola, I understand your feelings in this post as Kaefer has gone on to college. It is such a feeling of sadness and loneliness when our children 'leave the nest' the first time. And to be honest, it doesn't get much easier when they are grown, have been living on their own for years, come home to visit then leave again!! I'm glad Kaefer is finding her way around campus and has some good friends to help her along the way. I'm sure she will do very well. And you will too. :)

It's an exciting and bittersweet time -- so happy for them, excited for their journey, scared, missing them, a change in routine for everyone. I remember those times well -- from both sides of the page! I'm sure she'll make wonderful friends and enjoy her college. And yes, easier than ever to stay in touch!

aw, nurseries are great healing and contemplative places I have found, what will Kaefer major in ?

I'm wishing your daughter all the best! I know she will do excellent!
It's a big step for both of you, but you're both are going to do great!
I think it's excellent to know how to change your bicycle tire!!
Big Hugs!

It sounds like your daughter is off to a wonderful beginning! Yay. And it is wonderful to have a handy guy to help and teach. We all should have been taught to be handy in school as well as how to survive in nature.

Thank you for your lovely comment and i wish you a wonderful weekend.

I will never forget the day we dropped off our baby at his college in Nashville, TN. He was so young looking and didn't even look old enough to be a college kid. I watched him pedal his bike away and cried most of the whole 8 hours back to NC. Your Kaefer is just adorable and she will be just fine. You will too...I promise. A bittersweet post to be sure!

A start of a new chapter for both of you. One good thing is she isn't really that far away. Our River House is about half an hour north of Davis and the trip back and forth is pretty easy. What are you knitting?

oh, I can imagine how you must feel. It'll take a while to get used to, but it's good that she's happy there and that you know she's okay. I must say I'm not looking forward to the moment my kids will leave the house ...

I know the feeling - but I can promise you that it does get easier with time! And Kaefer has such a beautiful head start thanks to having such wonderful parents - she'll do great!