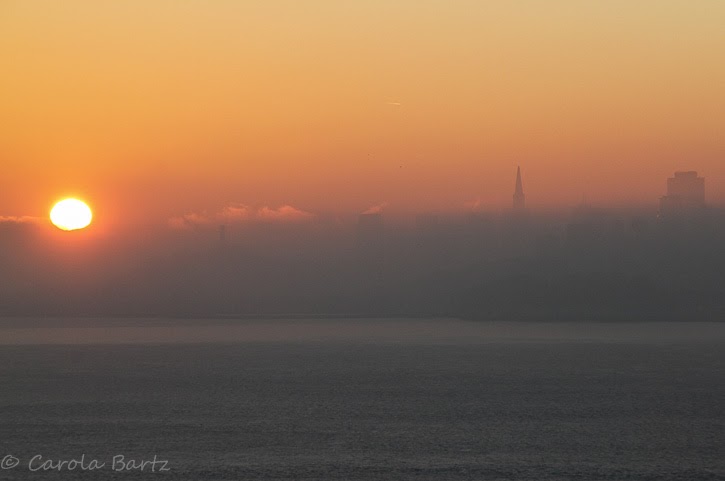 This has been a very short week, a week with my main gratitude happening towards the end of it.
Here goes:

1.
We had our citizenship interview on Friday in San Francisco. We had applied for US citizenship in September, had our biometrics appointment last fall and received the invitation to the interview at the beginning of January. We were quite excited about it, but the closer we approached the date the more nervous I became as well. There honestly was no reason for it. Thanks to a very nice immigration officer who made me feel relaxed the interview was over way faster than I had thought. I didn't blank out during the test portion (which was my main concern) which is the second part of the interview and after that I was free to go. The Geek had his interview at the same time (with a different officer of course) and he also passed. It will take a few weeks until we will be scheduled for the oath ceremony in Oakland.

2.
Since we know that morning commute to the city is pretty heavy we left early and thus avoided any traffic congestion. We were at the Golden Gate Bridge shortly before sunrise. We had time and stopped to watch the sun rise over a foggy San Francisco - in the photo above you can just see the top of the Transamerica Pyramid and if you know the city you will also recognize Coit Tower if you look hard. It was such a beautiful morning and a hopeful sign for the day.

3.
The weather was lovely that day and we decided to enjoy it after our interviews. We drove up Conzelman Road to the Marin Headlands. This is one of my favorite roads in the area. It offers great views of the Golden Gate Bridge, especially in the evening when the setting sun throws a golden glow on the bridge at it shines in a warm red-orange tone. No such luck this day since it was way too early, but we didn't care. It was beautiful anyway. 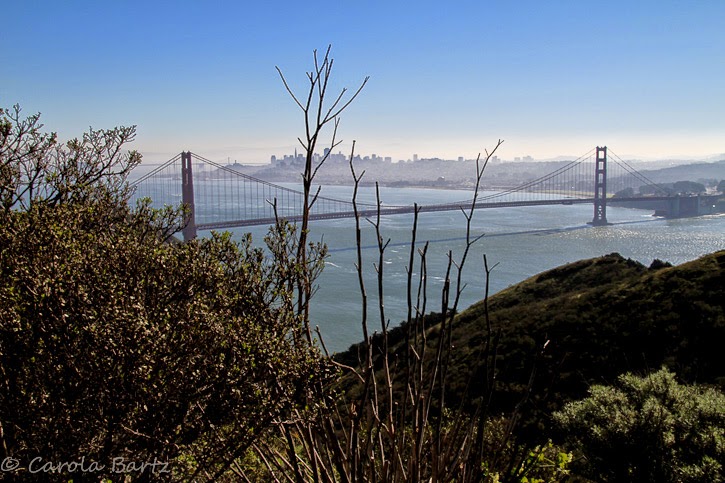 4.
Yesterday Kaefer took the SAT at our local Junior College. She wants to go to university after she will have graduated from high school in spring 2016. She knows that she needs to pass several tests for that, which means that this spring will be loaded with AP exams and perhaps even subject tests. It's a bit crazy, but she knew before that Junior year is the hardest year in high school. So we were quite grateful that she had the opportunity to take the SAT already in January, and of course she hopes that she did well enough. Some of her friends had decided on this date as well, and they could encourage each other while they were waiting in line. 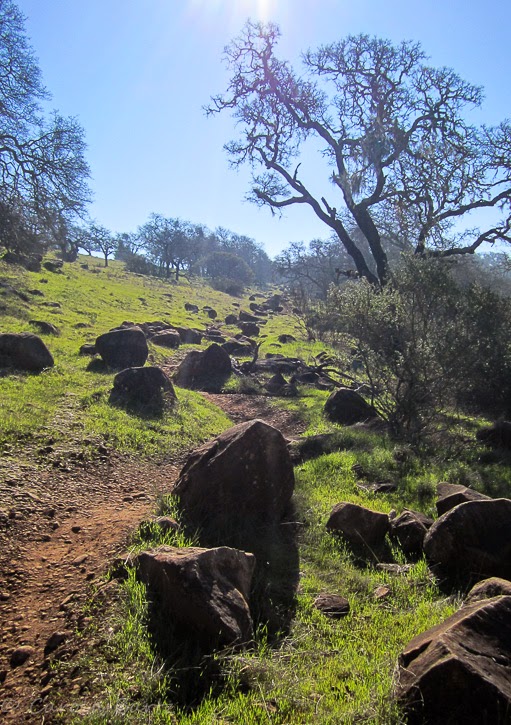 5.
While Kaefer took her test, the Geek and I decided to take a short hike in our State Part. I used to hike there pretty often, but I haven't been there even once last year. It was gorgeous to be back again. We hiked the Rough Go Trail (in the photo above) up to the ridge and then back again (since we were running out of time). I had almost forgotten how beautiful it is here! We saw some deer who weren't afraid of us and passed us rather closely. Every time I see them I'm thankful for the wildlife we have here. 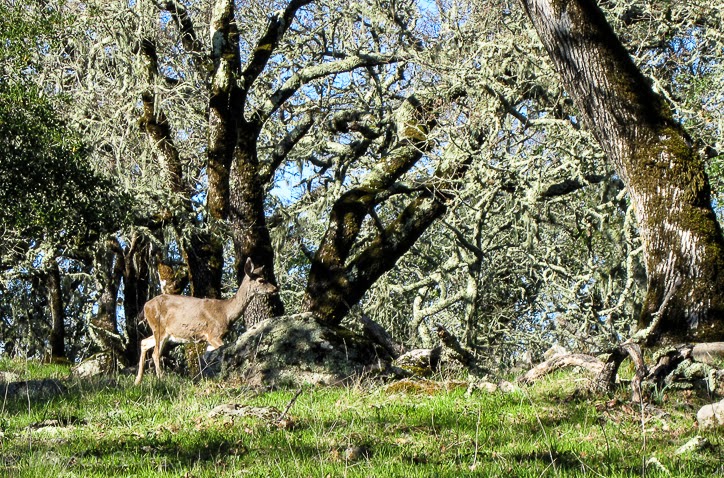 6.
Although we didn't have much rain in January, the hills in our county are green and juicy - the cows are definitely happy cows around this time! I took this picture out of the driving car while going along the highway on our way back from the city. I just love the hills, the meadows and the solitary trees - this is so typical for my county. Only most of the year the hills are brown and not green. 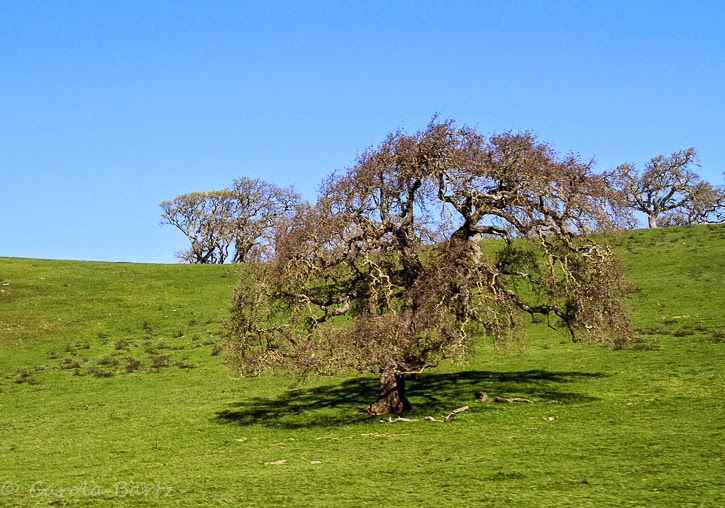 7.
I haven't really baked very much since the beginning of the year. A few breads, but nothing major and I didn't try anything new. Except I'm still trying to improve my baking rolls capacity. In Germany we eat a lot of rolls, they are freshly baked every day and usually you can get them early in the morning in the bakeries (starting at 6:00 am). These rolls are very different from the dinner rolls you can get here. I haven't found anything here that really compares to them, that's why I still haven't given up baking them myself. Every time I get closer to our German rolls, but so far I haven't made one that is "it". Last week's batch, though, came pretty close - another item on my gratitude list. 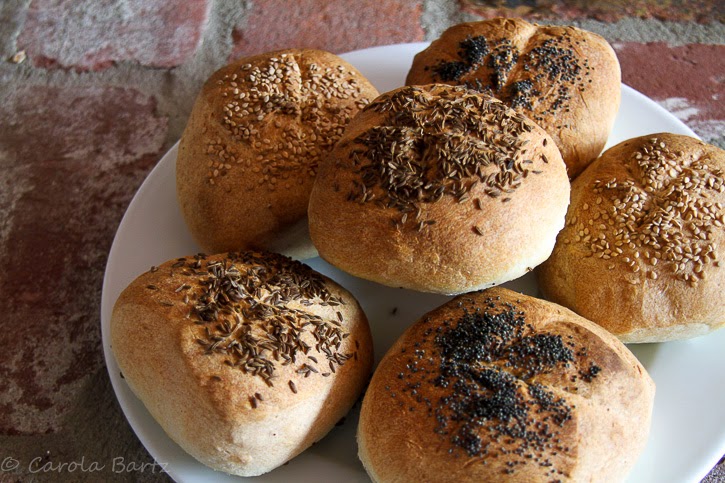 That's it for today. Now it's your turn - what are you grateful for this Sunday?


*********
A good way to express your gratitude is to write in your journal.
Journals in different sizes are available at my Etsy store,
some of them featuring my artwork as a print. 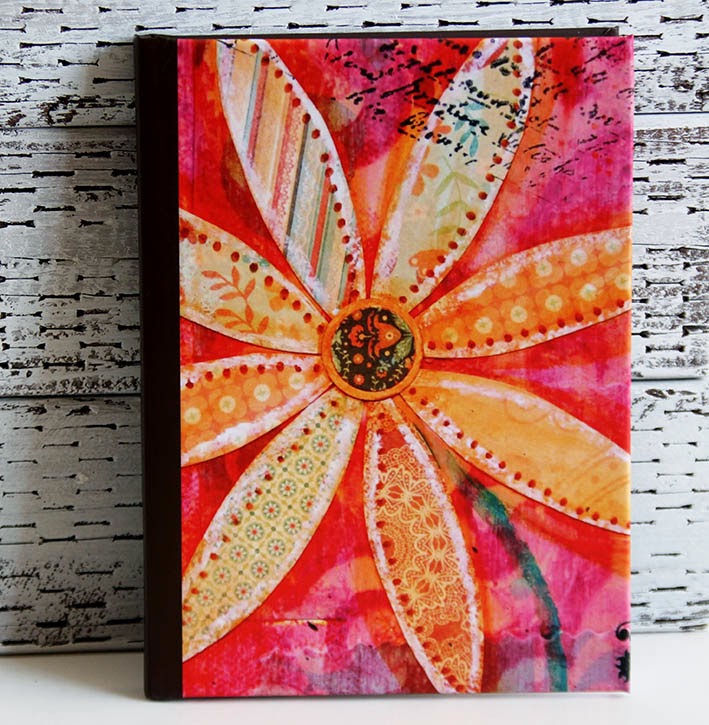 I love your post...I am grateful for an experience that I had yesterday , it made my heart sing..I wrote a blog post about it..I was able to make it to our local beach in time to witness the release of 20 pelicans back into the wild..These pelicans were injured over the Christmas holidays by stray fish hooks, trash in the bay, etc..The Wildlife Center of Texas took in the 100+ injured pelicans and gave them support and veterinary care..20 out of the 100 were released last week and 20 more released yesterday! :-)

PS: I realised as I hit publish, that I hadn't said congratulations on passing your citizenship exam - and how much I liked the beauty you showed us. Sorry about that.

Congratulations for passing your test! Your photos are great of the bridge and deer!

Good luck with your application for citizenship, I can well imagine that you were tense.
An interesting post and I know the reason your rolls don't taste perfect..... you just need to be eating them in Germany!
Jo x

Congrats on passing the Citizenship exam! Sad to say, but you now know more about this country than probably 50% of its natural born citizens.

Lovely images of our part of California -- that sunrise photo is amazing! And congratulations on passing your tests, Carola -- it must be a relief. What am I grateful for? My small and comfy home, with dear ones nearby. It is such a blessing.

I love these photos. We often travel to N CA from CO, and we bring our bikes to ride the Marin Highlands. The buns look yummy!

How exciting that your interviews went well! Sounds as if you are going to be a citizen soon! A big step!! Congratulations on your progress with t his. love your shots. I used to live in Sausalito, and lived right up overlooking the Golden Gate bridge in an area similar to your shot. Used to go out on the balcony every morning and loved the fog and mystery of this scene. Great capture!