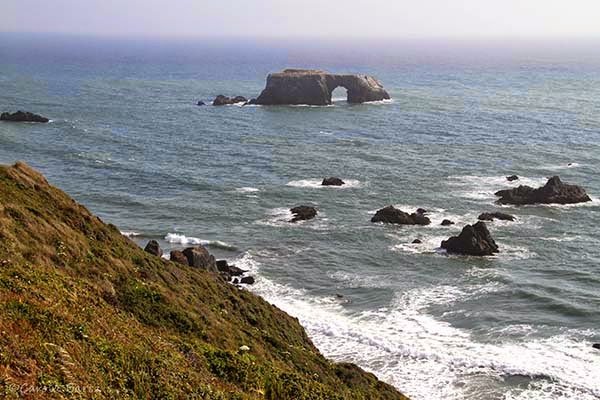 Friday was the last day of school - oh such bliss! Kaefer wasn't the only one in our family who was looking forward to it, I was as well. The past six weeks have been crazy - every year it's the same, and every year I wonder why it has to be this way. It seems that teachers wait until the very last minute with big projects, there are tests and finals - it's just crazy busy.

But now the summer has started, and we welcomed it in our own way. We went to the beach, Kaefer, her friend K and I. It wasn't a particularly warm day at the coast - it seldom is. The Pacific Ocean here at the North Coast tends to be cold, windy and often foggy. We didn't have any fog, at least not until the early evening, but it was still a bit on the chilly side. 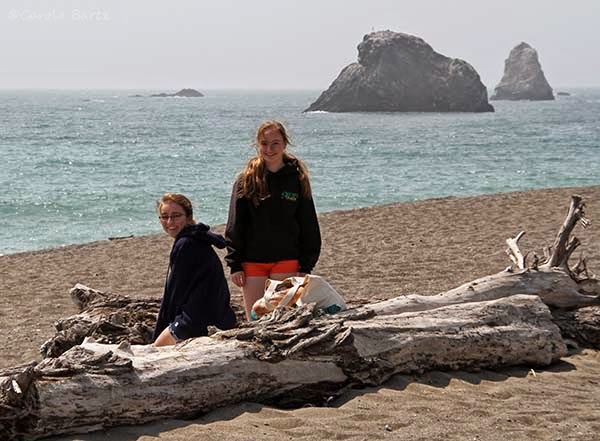 However, that didn't hold us back from having a picnic on the beach, sitting on some driftwood and eating sandwiches and chips. After that we closed the bags safely so that the seagulls couldn't get to the food and the girls went to the water while I walked around, taking pictures.

There is always something to photograph at this beach. The river runs into the ocean here as well, so there often are people who kayak to the mouth of the river and rest here, enjoying the scenery. 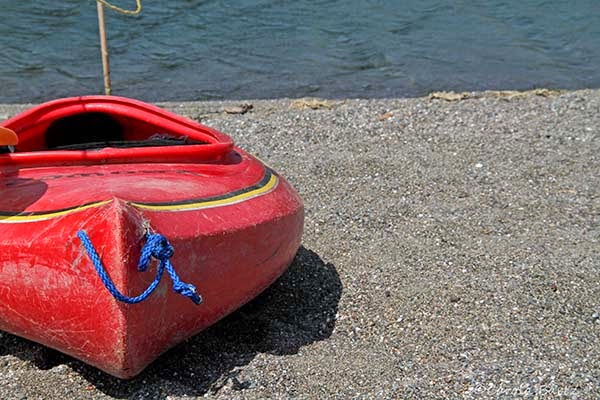 Although the air was cool, the sand was warm and even hot in some places. Many coastal plants were flowering. 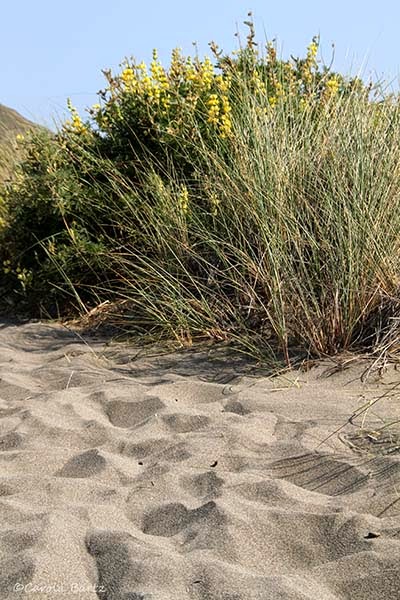 There were dead crabs, only the remains of the shells while the seagulls ate the rest of it. 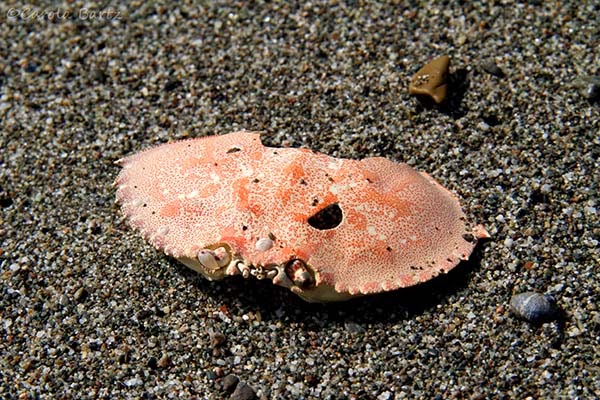 Beautiful driftwood - this one has been here for ever, and often the seagulls sit here, watching beach goers for food (what else?). 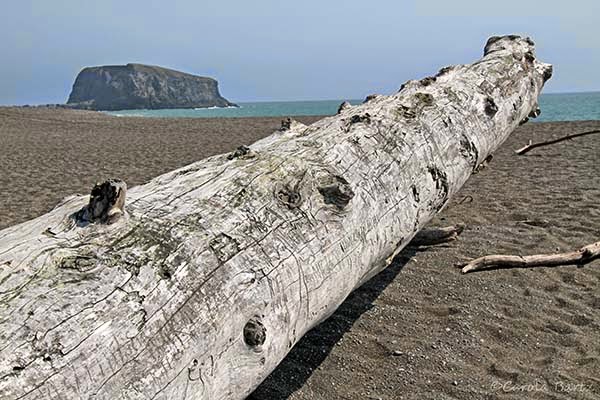 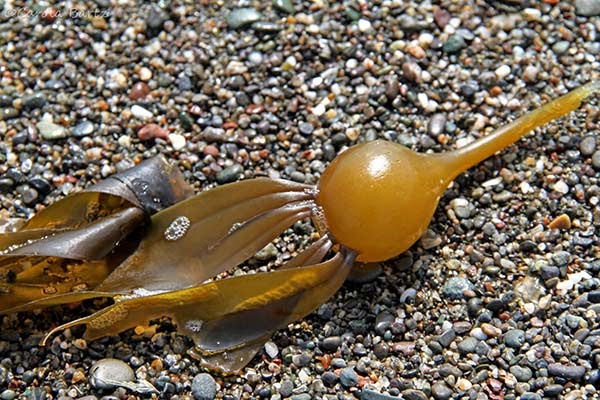 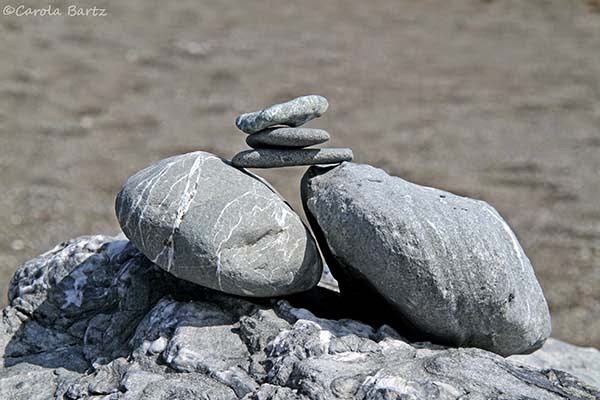 It was puppy season for the harbor seals, so part of the beach was closed to give them space. Unfortunately there are still people who get too close to the seals and then the mothers abandon their babies - it's awful. This afternoon, though, the seals stayed by themselves without any human intruders. They love to hang out at the river side of the beach. 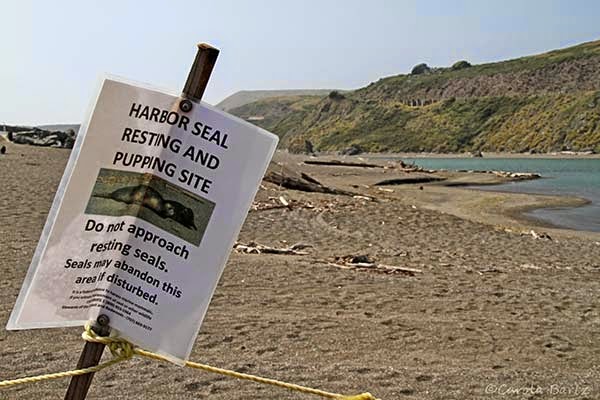 Here you can see them a bit closer thanks to my zoom. 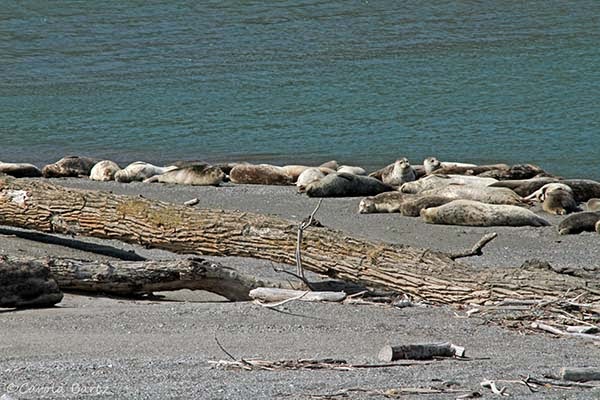 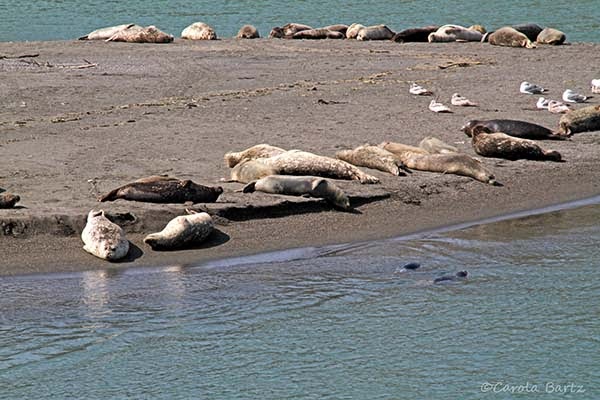 Someone had drawn circles in the sand (this photo was taken from the top of the cliff on our way back)... 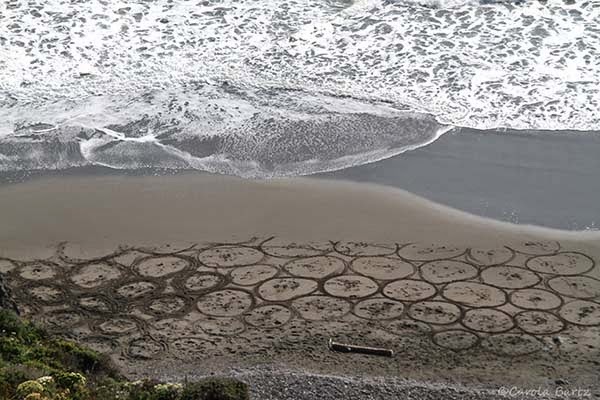 ... and of course there were footprints in the sand everywhere. 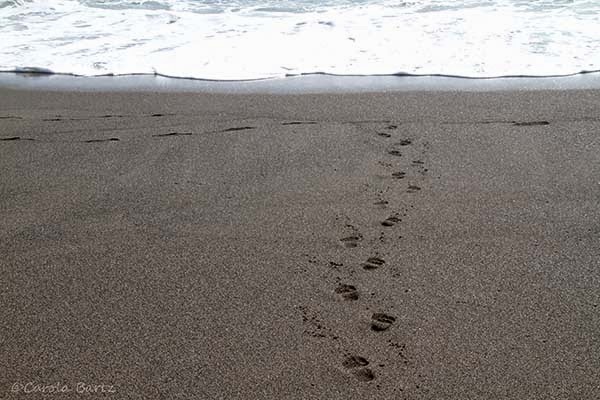 The girls had fun writing in the sand and then waiting for the incoming tide to wash it all away. Yes, they even went into the water even though it was freezing cold! 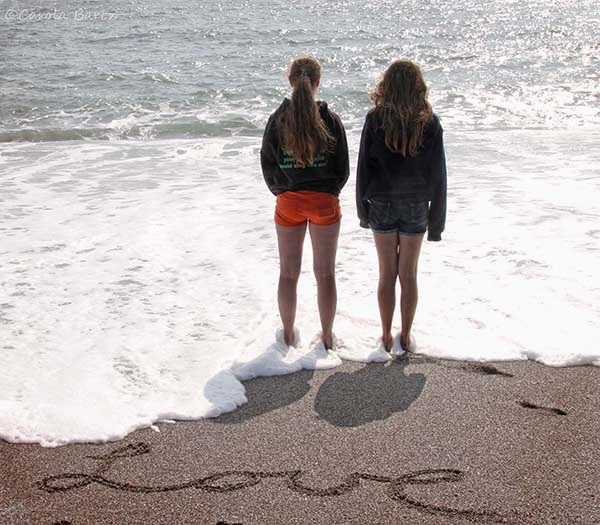 And this is what I am going to do for the next few weeks - spend time with my daughter, with my family. I have been looking forward to this for the past two months, and I'm so happy that  finally we have the time to do this. Which means I won't be here very often for the next two, three or even four weeks.

Have a wonderful summer everyone (at least all of you in the Northern hemisphere - I know that you're sailing right into winter in the Southern hemisphere)!! 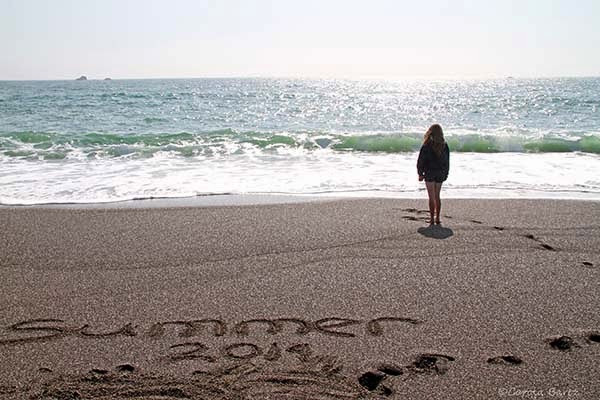 Thank you - have a wonderful summer. All of you.

Great photos! We are all counting the days here until school is over (finals are the week of June 9th)! I love the one of the girls facing the ocean and they one of the kayak, especially.
Rinda

What a great way to celebrate summer and I hope that you have a fabulous one!

love your beach photo's Carola. So happy you are free for the summer....enjoy, the time will go fast.

Gosh, we are sweltering here already and your photos of the beach wearing jackets was so refreshing. Loved all your photos from the day, especially that piece of driftwood. Your perspective on that is incredible.

I am so jealous! The beach looks beautiful. Have a wonderful summer.

Looks like a day to remember. I love the beach and really enjoyed seeing the picture of the seals.

What a special day and what special photos ;o) The last two really made my heart smile ;o) Happy Summer ;o)

Oh what a wonderful feeling to be free for the summer! Love the beach photos!

What awesome photos my friend! There's no place I would rather be! Would love to see some 'pups'! How neat! Happy summer!

Love all your photos of our beautiful NorCal Pacific Coast! I was in Monterey about a month ago and we were watching (from behind a fence) the mama seals with their pups. Have a wonderful summer!
(Oh, that's seaweed from a kelp bed instead of algae. They're fun to walk on and pop!)

Thanks for bringing us along, Carola. All so lovely!! I've lived most of my life according the the schoolyear calendar and well remember the exhilarating anticipation, excitement and relief of JUNE!! Enjoy.... because yes, the summer just flies right by...

It will be a long time before I have a chance to enjoy the Pacific coast... but your photographs brought me a little bit closer. Simply gorgeous!