I haven't been here for over a week, and I am sorry that I just disappeared without a word. I didn't mean to do that, but last week was a wild one. I will tell you more about it in my next post, but today, I just want to play with "Texture Tuesday" again.

I chose an image that I took last week during a very quick walk around the lake - Jo and I both didn't have much time, but we wanted to get out and move a little bit in an area that we both love. As if the birds knew that we were in a rush they didn't show themselves - as if they were thinking that they couldn't tempt us to stop and watch them. Because that is what we do, no matter how often we have seen "our" black-crowned night herons and green herons. But as I said, they were hiding.

The lake was very still that morning, the light was beautiful, the sun had just come through the clouds, it was very atmospheric. While the sun had hit the other side of the lake, these boats were still mostly in the shade, just lit up in a very few spots. 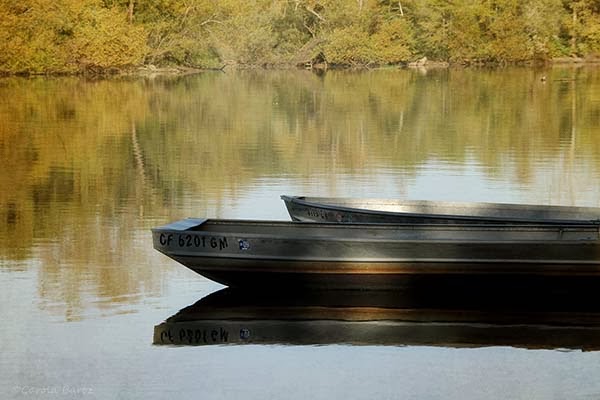 I blended the photo with Kim's texture "kk_appreciate" in soft light at 100% and then removed the texture again on the boats (at 50%) because the texture had lightened them a bit too much and I wanted to stress the shade. A quick layers adjustment, and that's it.

As you can see, I never get tired of the lake. It is such a beautiful place.

What is it about water that calms and soothes our souls? This is such a peaceful-looking place. Wonderfully captured...with out without the herons!
Visiting from Texture Tuesday.

Beautiful job with the photo. It looks so natural I wouldn't have known texture was added if you hadn't said so!

A peaceful and lovely composition - The reflection on the lake is so pretty ... The moments by a windstill lake are precious!

This is a lovely capture -- the colors and reflections with the boats in front create a beautiful autumn image. You are lucky to have such wonderful place to walk.

Wow!! I LOVE this, especially the boats. Wonderful soft colors throughout the background, and the boats are just stunning! Yes, it does look very quiet.

So pretty and peaceful. I'd like to just sit in one of those boats and float!

It is indeed a very, very beautiful place.
I hope that your wild week is over and that you and yours are safe.

What a great reflection.

A beautiful shot and love the quietnes of this! Also, all of us need to just "disappear" at times. Love your shot!

Wow, is this beautiful. So tranquil and peaceful, you really have a winner here.

Beautiful, and so peaceful, Carola.

so very special....i feel calmer...just looking at your beautiful image...

Peace and tranquil in a world of chaos. Beautiful!
Jo x

Such a peaceful and happy photo! Great work. :)

I can see why you never get tired of the lake - it's so beautiful and serene!

The lake looks so peaceful...

Gorgeous photo ;o) Great to see you back ;o)