The Bridge Over the Bay 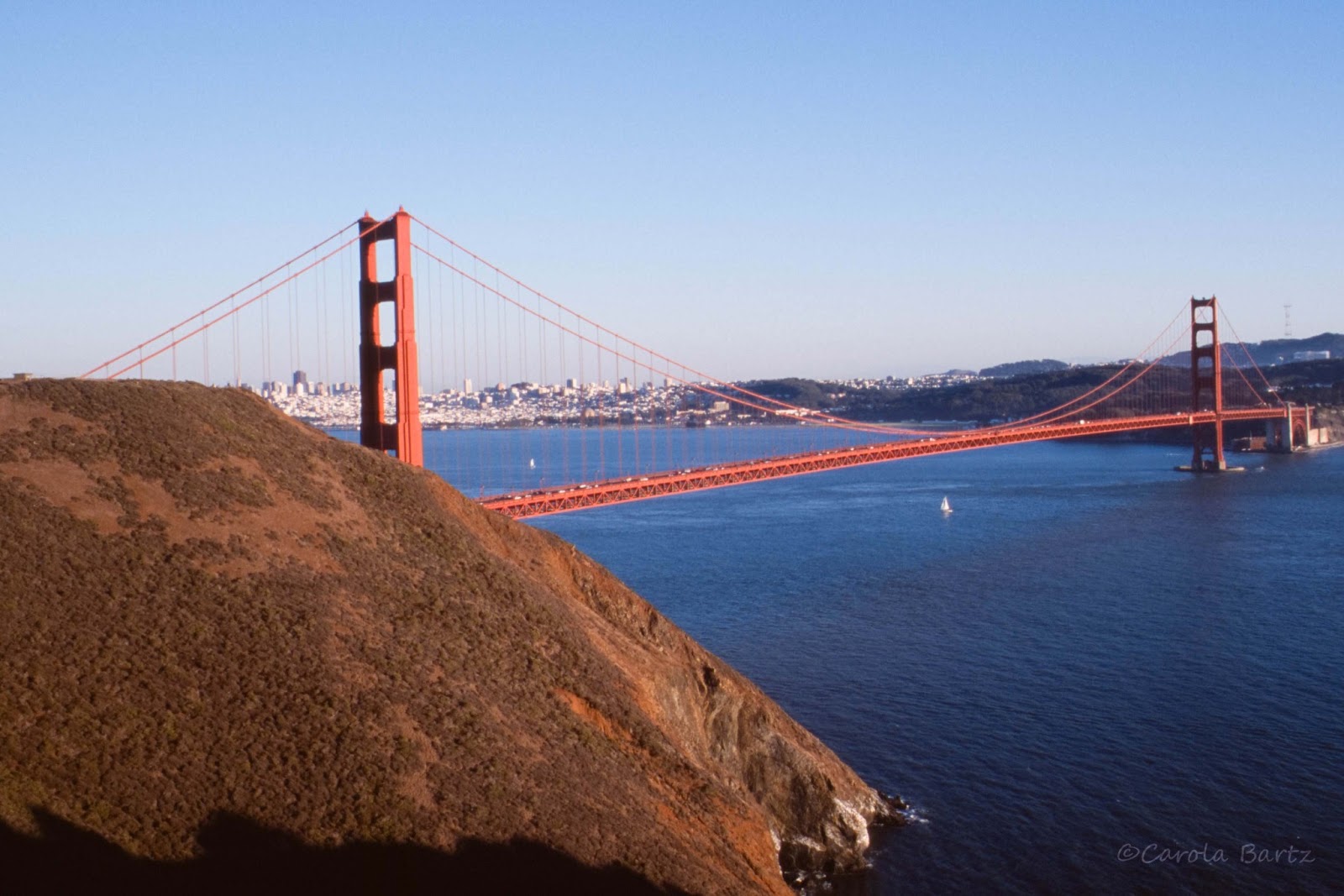 When Inspiration Avenue's prompt was "bridges" this week, for someone living just a mere hour north of San Francisco the choice wasn't difficult at all.

It had to be the Golden Gate Bridge. This beautiful orange-rusty red bridge that has spanned the San Francisco Bay  for more than 75 years. The direct way up north from the city. The direct way into the city if you come from the north. 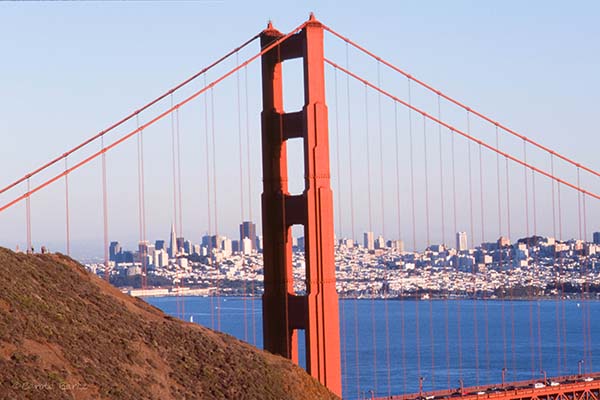 At sunset the bridge glows in the warm light. From Conzelman Road on the Marin Headlands you can see San Francisco - on a clear day. I especially like it when big container ships cross under the bridge. 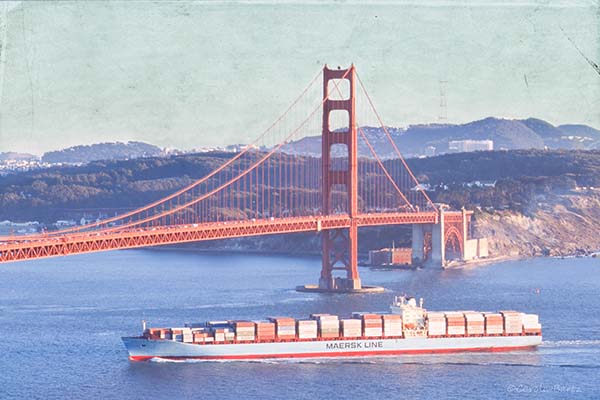 However - clear days don't always happen in San Francisco. More often than not the bridge is at least partly covered in fog. 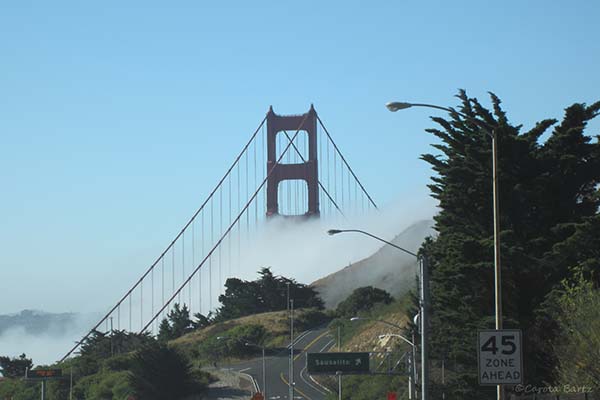 This is the first view of the bridge when you come from the north on US 101. Sausalito is the last exit before the bridge, and from there you can head up Conzelman Road to get the fantastic views of the bridge from the west (like the photo on the very top of this post). 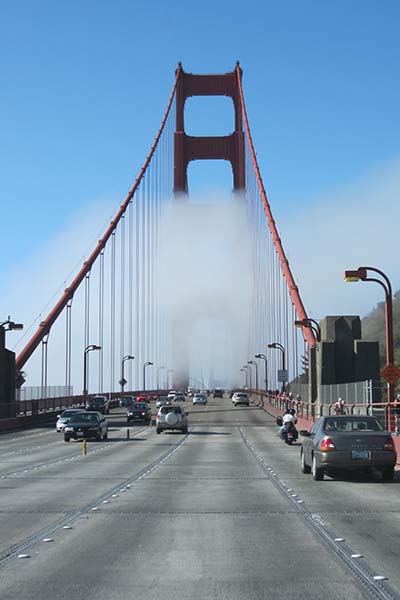 Sometimes you can't see the top of the pillars because of the fog. 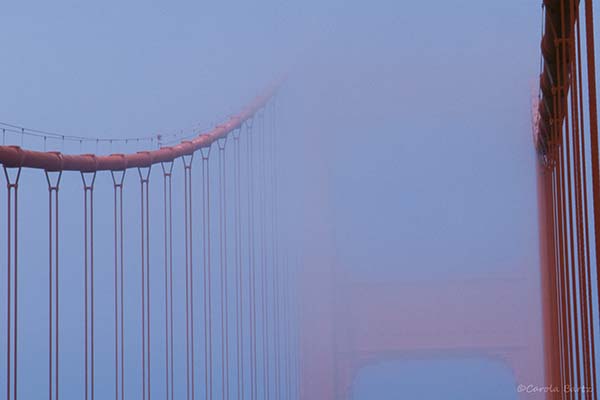 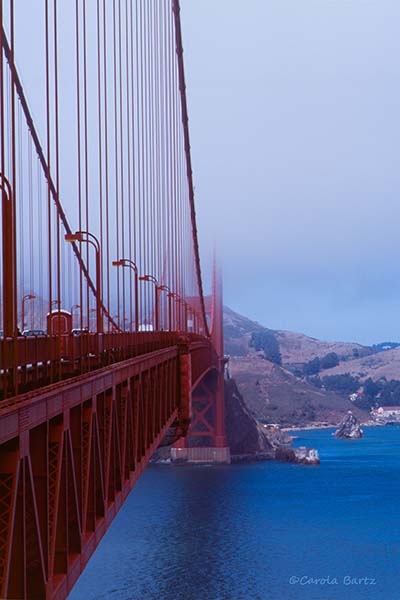 Walking across the bridge usually is rather chilly, even in summer. And it takes quite some time. However, you can see details of the bridge that otherwise, if you sit in a car, just pass by. It's such a fine construction. 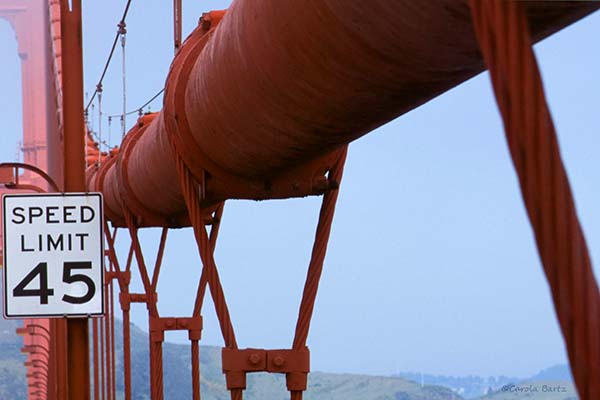 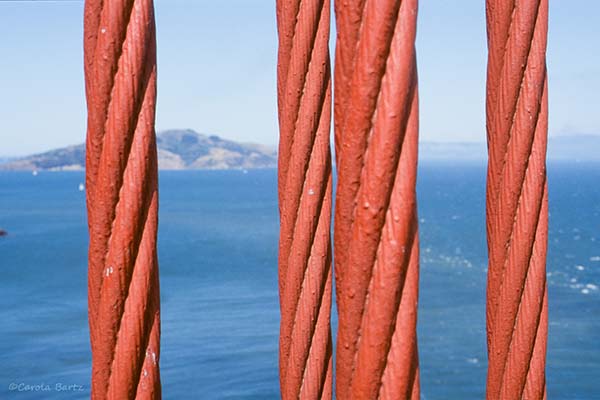 From the south - i.e. from the city - the view of the bridge is beautiful as well. Here, you can see the bridge from Baker's Beach: 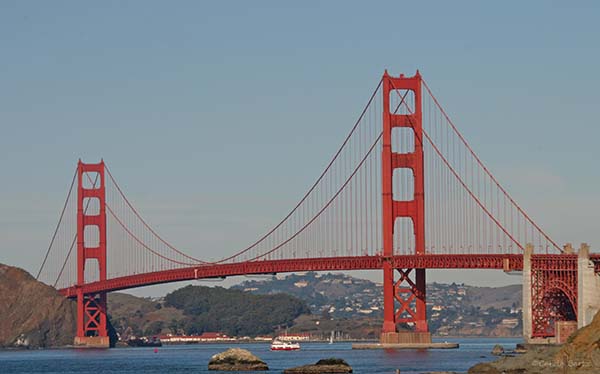 If you go up Lincoln Avenue, the bridge is hidden behind trees. If you walk further, the view of the bridge is different, but fascinating. 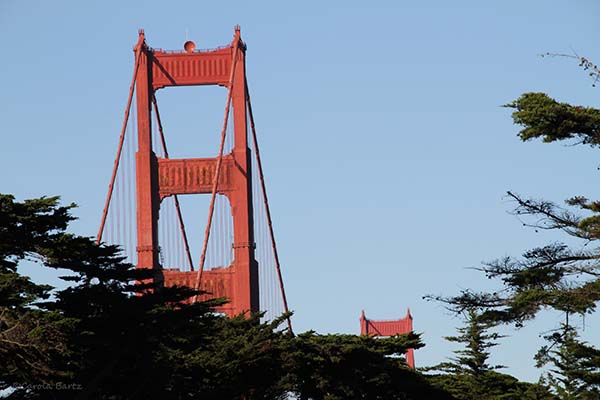 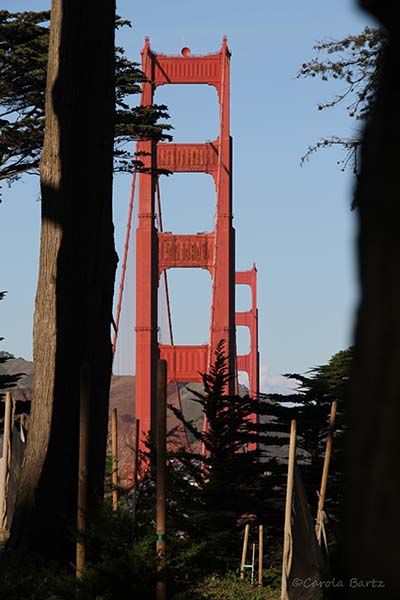 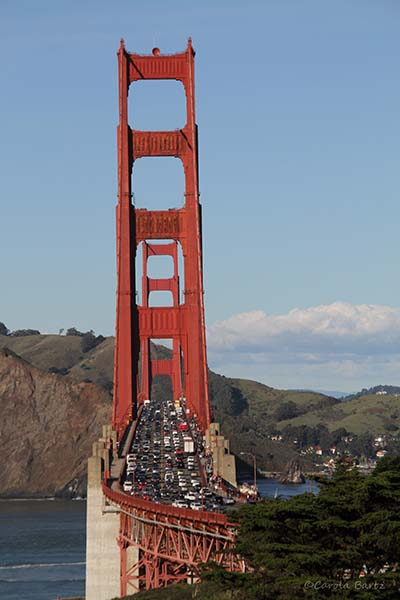 Sometimes the traffic on the bridge is horrific. 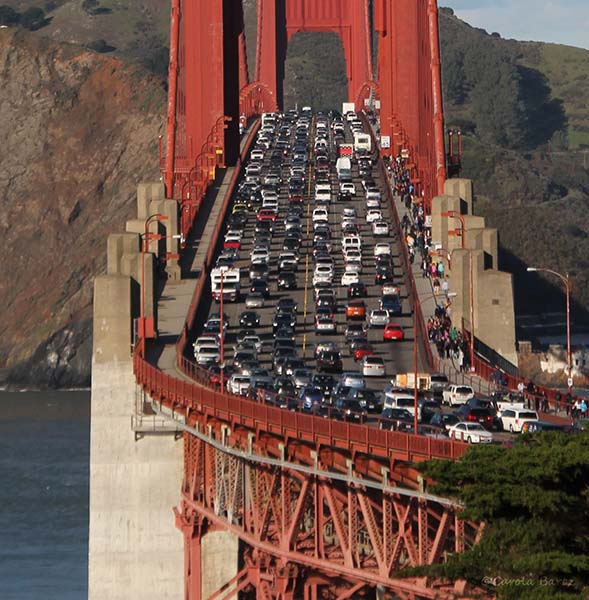 At night, of course, she's a beauty. 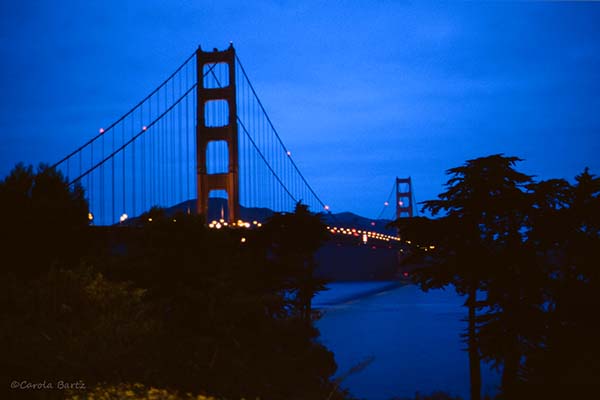 How sad is this? I have only seen this gorgeous bridge from the plane as I flew into San Fran.
Your post let me 'see' it beautifully....thanks! Hope to make it out there one day to gander at it in person.
I heard you can ride a bike over it? We would love to do that!
Thanks for the tour....it was very informative for me!

Gorgeous pics of the bridge, Carola!

What a great variety of shots you have, Carola, of this famous and beautiful landmark!!

Lovely photos of the bridge over the bay. Wow, that traffic is very busy. Hugs Judy

Wonderful post and images, Carola. San Francisco is where I was born, but we left there when I was still an infant. I've visited a few times and love that bridge. I was surprised, in that photo illustrating the traffic, to see so many pedestrians on the bridge. I didn't realize so many people walked across it. I love your night shot, too...the perfect amount of color left in the sky to make it glow!

Even if I'm living so far from it, I've always felt that the Golden Gate is the Bridge of the bridges and your wonderful photos have emphasized that even more.

What amazing photos and you captured some beautiful moments there - I particularly love the fog. My Aunt lived close to the Humber bridge in Hull and as a teenager my cousin and I walked that bridge many times. Not as spectacular as yours though, and not that gorgeous warm colour either!

Thanks for taking us along the bridge :) Never seen a bridge up close. It's a great construction!
Anna

I love the bridge. I drive north on 19th Avenue on my way to work everyday, and I love the view of the bridge. Your cable photograph is fantastic.
rinda

Excellent pics of this iconic landmark! Some of us can only dream of seeing it in real life!

However, we have a few iconic bridges of our own here in the UK! ;-)

You have shown some views of the bridge I have never seen in all my years, Carola...12 of which were in Southern California. WOW. I'm guessing it's America's most famous bridge, along with NYC's Brooklyn Bridge. THIS one takes the cake for me. Fabulous images of all her best sides!

You shot some amazing pictures of the bridge. I especially like the one with the ship going under it as my DH had a career on ships and went back and forth under the Golden Gate many times.

We visited the bridge a few times whilst in San Francisco but never managed to see it due to the heavy mist. It was so terribly cold each morning until the mist lifted and we shivered our way around then it was so hot later. I warn anyone I know who visits as we didn't have clothes with us which were warm enough. When we crossed the bridge by coach, to visit a vineyard in the Napa Valley, we just saw a glimpse of the red bridge girders. It was not long before we were in sunshine, it looked just like Tuscany and it was really hot.
Jo x

what a lovely set of photos! I haven't been blog-hopping much lately. Guess too much is going on? or? well, I am reading more (& not magazines). Ha! great to see you are well & stil creating.