The most beautiful gift 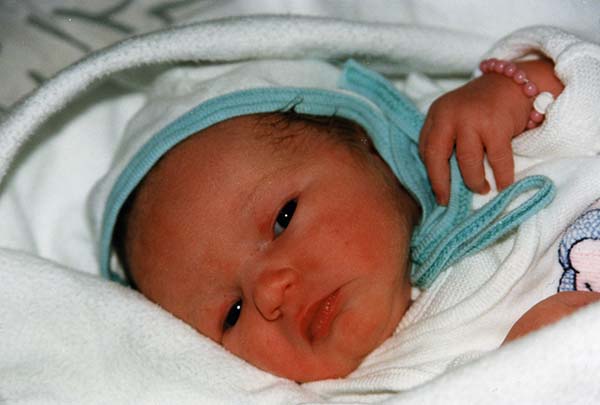 My daughter is 14 years old today. How did this happen? Wasn't it just yesterday that she was that precious little baby?

It's amazing how fast time slips by when you see your children grow up. When they're newborns you think you have all the time in the world, and then you turn around and they start school and suddenly they are teenagers!!

Kaefer has been the biggest and most beautiful gift I ever received in my life. I still see her coming into my life as a miracle.

I am what you call a "late mom" - I was 37 when I got pregnant with Kaefer. And up to the 25th week, the pregnancy was pretty normal. I never felt terribly nauseous, I didn't have particular cravings (only once) and I had a lot of heartburn. Then, at the end of the 24th week, I started labor - I remember going to the hospital late in the evening of that Friday. We had thought that I would come home that night again - but that didn't happen. They kept me in the hospital for almost nine weeks, strict bed rest (I was only allowed to go to the bathroom) with a constant IV full of labor stopping medication. Every ten days I got a special 24 hour treatment for the baby to develop her lungs in case nothing helped and she was born prematurely.

Thank God - that never happened. In hindsight I am forever grateful that I was so naive. I decided to make the best of the situation and be optimistic. Every now and then the nurses told me how much they admire my good spirits. I remember I prayed a lot during that time (and I'm anything but a religious person; however, I do have my faith). No idea where I got my strength from, but it was there and it carried me through the entire time in the hospital. Yes, I had my dark moments, when I cried and had wild nightmares. It was in those moments that the baby kicked like mad as if she wanted to tell me that everything would be alright.

The Geek came every day to visit. Most times we played - we both became masters in "Trivial Pursuit". At the end of February we got married - the midwives and nurses had organized and decorated, and it was a wonderful wedding - although very different from what we had planned. I was allowed to go home over two weekends, and after that I could leave the hospital. Four weeks later, Kaefer made her way into this world.

Here are a few pictures from her first year. 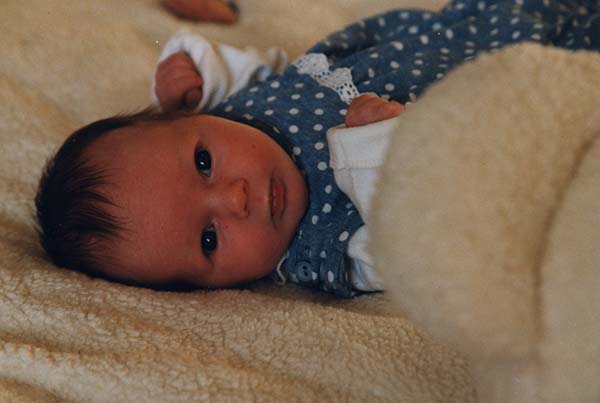 She spent a good time on this polar bear baby blanket - she still has that blanket in her room, although the head has lost its fluff by now and is just flat. 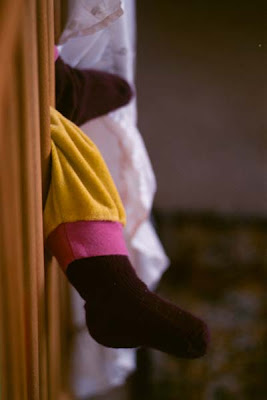 Her way of sleeping - always with her feet hanging out of the crib. 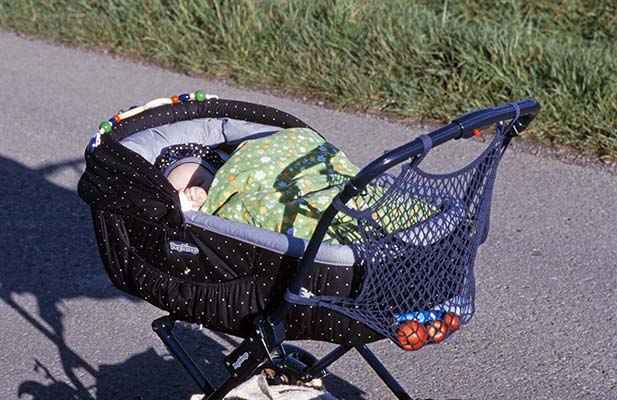 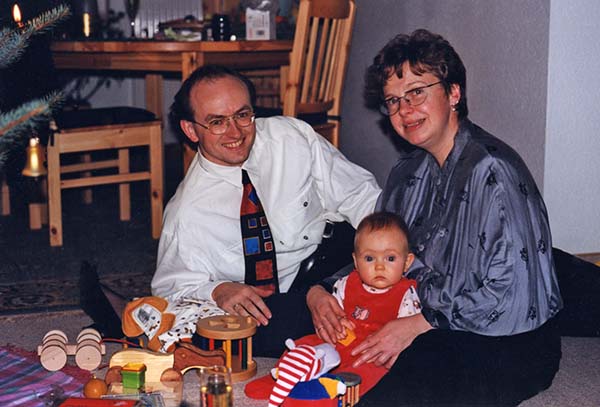 Our first Christmas as a family

I am blessed that she was a very easy baby. She has been a pretty easy child so far - I remember four as a very wild and difficult year and don't remind me of seven! That was probably the toughest year with her. Of course she has teenage attitude that can drive me up the wall (especially when I have a bad day), but all in all she's a wonderful daughter. Our life definitely is so much richer because of her.

So, fourteen today. She's almost done with middle school. She's getting more and more independent. She does what she wants and doesn't care what's popular (she probably is the only teenager who still is not on Facebook - good for her). She's a bit nerdy and has a great sense of humor. She's creative (remember those clay owls she made for me?), loves to sing and ice-skate and wants to become some kind of environmental scientist later. She already knows that she wants to live in Canada.

Whatever she decides to do - we will always love her.

Email ThisBlogThis!Share to TwitterShare to FacebookShare to Pinterest
Labels: family

What a wonderful post Carola, and many happy returns to your lovely daughter. I'm the ancient mother of. Now 18 year old...it truly has been life enriching. I think the ignorance of first time is very helpful when you have such a complicated pregnancy, sort of cocoons your worry gene a bit!!

Oh my goodness - there are more parallels in our lives than you would believe! Happy, happy birthday, Kaefer. May all your dreams come true! My gorgeous daughter turned fifteen last week. She never buys clothes for their labels, but how they look, is very creative (Music, Art and food!) and wants to be an environmental scientist! Maybe they will work together one day.

Whoops, meant to say what fabulous photos, and So pleased the pregnancy turned out okay in the end x

Thanks for sharing about your beautiful daughter. Sweet to hear her story /and yours/from the beginning. I'd say you've had a pretty easy ride since she arrived.
Hope she glides through teenage years for you too.
sounds like she has a good head on her shoulders and will do just that and on into adulthood.

Happy birthday to the whole family.

What sweet, sweet pictures. Congratulations to your whole family.
Rinda

Lovely post...My son turns 14 in December it is a big time for change at the moment, so many things they have to do with school at this age....oh and 7.....now that wasn't fun at all.....I thought it was supposed to be terrible 2's but 7 was a flippin nightmare lol ;o)

Your daughter sounds delightful! What a beautiful baby she was as well!

Tell her a belated happy birthday from New Zealand :-)))

Happy Birthday to your daughter. What a great story...children are the greatest blessing in life and it sounds as if she is a very special person. I love the picture of the three of you together, so very cute.

Happy Birthday to both of you!! To your daughter..and to you for the day you became a mother. And - what a beautiful story of strength and perseverance and hope!

Happy Birthday, indeed. I have a feeling you are her best gift, too, Carola. What a beautiful tribute to Mother's love.