Maria at Simply Cool Stuff chose the word for this week - rock.

The very first thought that shot into my head was 'Rock', the German word for skirt. A rock is 'Felsen' or 'Stein' - completely different words.

As a third thought I saw a beautiful little spirit rock with an engraved coyote that I bought several years ago at some Native American store and that I carry around with me pretty often. And this rock stuck with me. 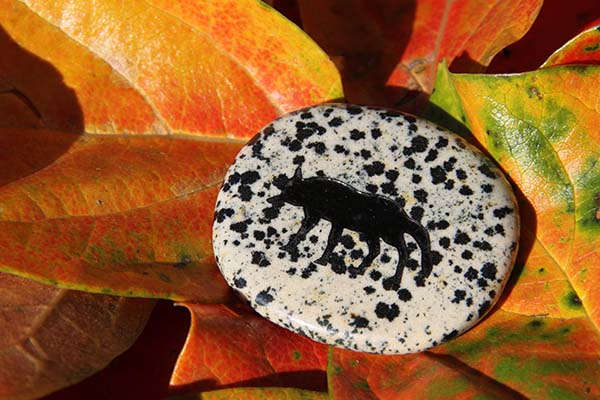 The coyote is one of my favorite animals in the wild - and a wonderful spirit animal of the Native American World. No one other than painter and children's book author Harriet Peck Taylor can describe coyote better than she did in her note to her book "Coyote and the Laughing Butterflies"﻿:
"Coyote is a popular character in Pueblo legends as well as in tales of other native peoples. Most often he is called the Trickster. But he is more complicated than that, and therin lies his appeal. He frequently brags and gets himself in trouble, but he is also courageous and has magical powers that he sometimes uses to help others. He does not always follow the rules, but sometimes acts in bold, impulsive ways. Often foolish and lazy, he is full of life and we can see ourselves in him. Coyote makes us laugh and can teach us about ourselves and the world around us."
I love the special spirit of Coyote, and this rock is my spirit rock or worry stone. It pretty much lives in the pocket of my jeans where I can always feel it or touch it when I need to. Its smooth and fits perfectly inside my hand. When I have it with me, I feel Coyote's magical powers, his courage and boldness, but also his wit and his liveliness.
Each one of us has her own rock. If you want to read more, look at the list on Maria's blog.
Posted by Carola Bartz at 1:17 PM

ooo, i love coyote, too!

That is an interesting looking rock you have.
When I went to school in CA we had lots of "yots"
up in the mountains of Idyllwild...I can tell you some stories about those critters:) I think they look cute with there scruffy looking fur and big ears...but unfortunately, some of my friends in the States have had there pets killed by them....how sad.....

What a terrifically bold worry stone! Rock on living by your wits. ;o)

I loved your post this week, it made me miss my worry stone I had for years that I carried with me from apartment to apartment, city to city...haven't thought of that worn little tiger eye piece in years actually :) Coyote is a dancer and a laugher, and a great familiar, thanks so much for sharing!

What a great rock/talisman. Coyote must be your totom animal.

Oh my goodness! I purchased this book at the National Museum of the American Indians in Washington DC http://www.nmai.si.edu/
I love the pictures in this book....

Hi Carola,
I want to wish you and your family a wonderful Thanksgiving. Your rock is amazing and also, I love your background on your tag for Tag Tuesday...that was fun, wasn't it? Have a beautiful holiday!!
XO
Cindy

Wow that's awesome, really interesting to read, I love that you carry it around in your pocket!!

Coyotes are certainly interesting animals. They are highly adaptable to their surroundings, opportunistic, and good at observational learning which makes them SMART. In an era when wildlife is competing and losing ground to humans, the wily coyote survives. A good example for us!

I am the Mom of Domestic Scribbles who grew up very near the Chimney Rocks which are in south central Pennsylvania. Our high school year book was named the Chimrock in honor of our locally famous rocks.Carol, Domestic Scribbles Mom