Then The Road Disappeared... 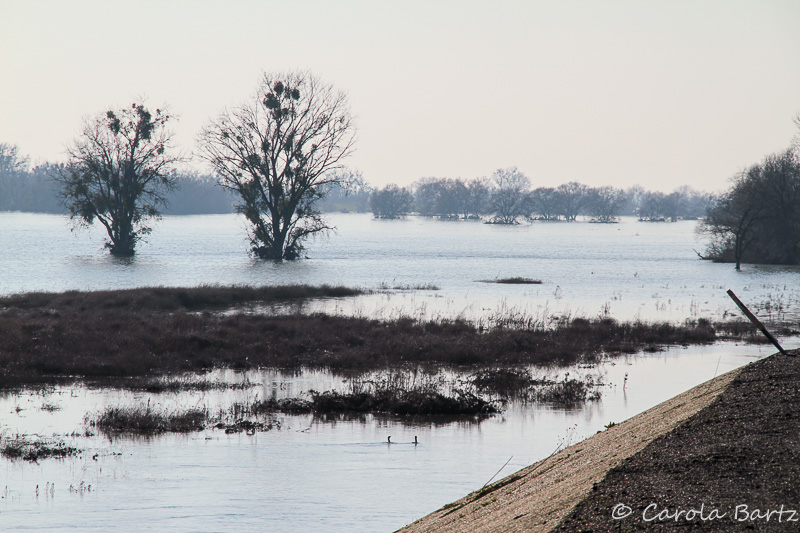 Martin Luther King Jr. Day and my birthday were on the same day this year (a real honor), and since neither the Geek nor I had to go to work we went to Davis to spend the day with Kaefer. It was the third sunny and dry day in a row which we enjoyed so very much. I had hoped to go to Lake Berryessa and hike there, but on our way there we saw signs that the road was closed due to toppled trees and rock- and mudslides during the recent storms. It was a bit of a disappointment, but then we decided to go to IKEA in Sacramento by taking back roads and thus getting to know the area a bit more.

It's a very flat country there with lots of agriculture. Some might think it's boring, but it actually has its own charm. When we came closer to Sacramento we had to take I-5 because the river road we wanted to drive along was closed due to flooding. However, right when we had crossed the levee the land was much drier and we were able to leave the Interstate and go along the river road.

"The river" is the Sacramento River of course, and it was pretty full, flooding the banks. 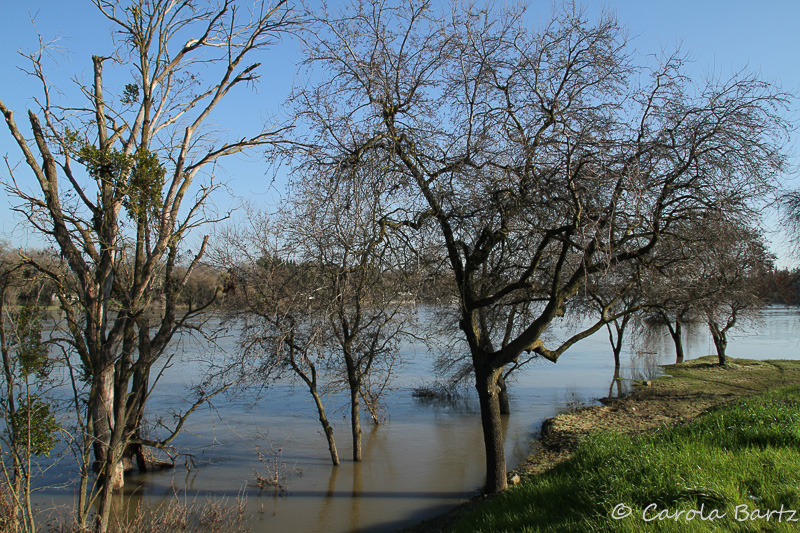 I saw birds sitting in the trees, like this yellow-billed magpie that we don't have in our area. 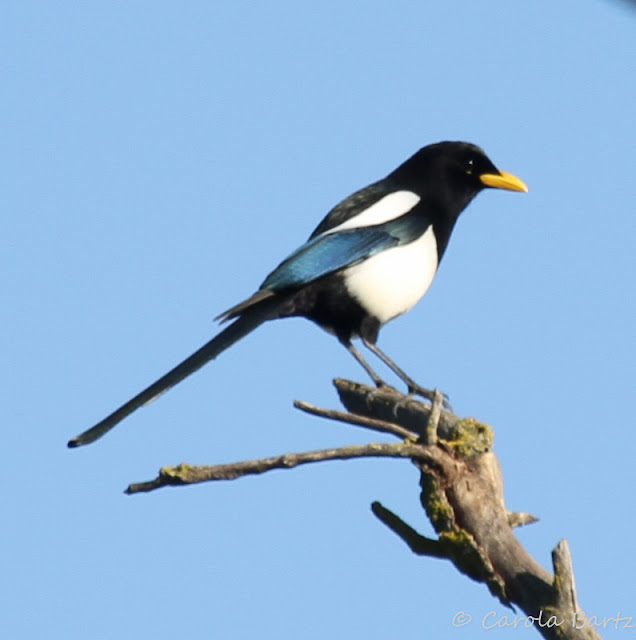 We shopped at IKEA for a while - it's interesting how you always find something there to buy, this store is immensely dangerous - and then decided to go back to Davis via back roads again since I-80 was hopelessly clogged with traffic.

On our way we decided we wanted to see how badly the river road was flooded. While driving on I-5 into Sacramento we had already seen how widely flooded the land was beyond the levee. Now we got closer to it, following the river road... 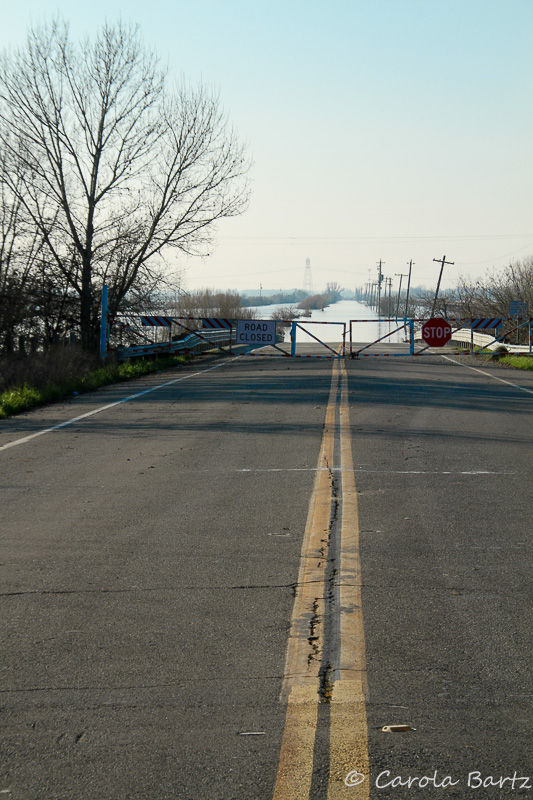 until we arrived at this barrier... 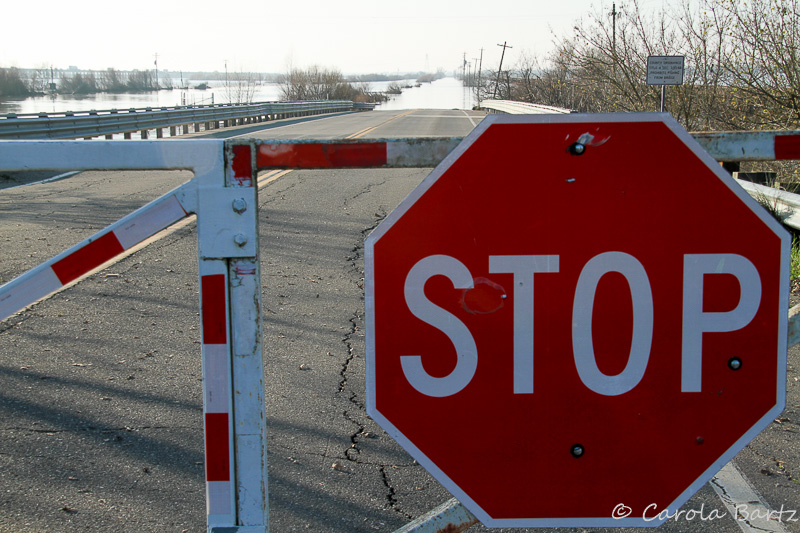 behind which the road simply disappeared. 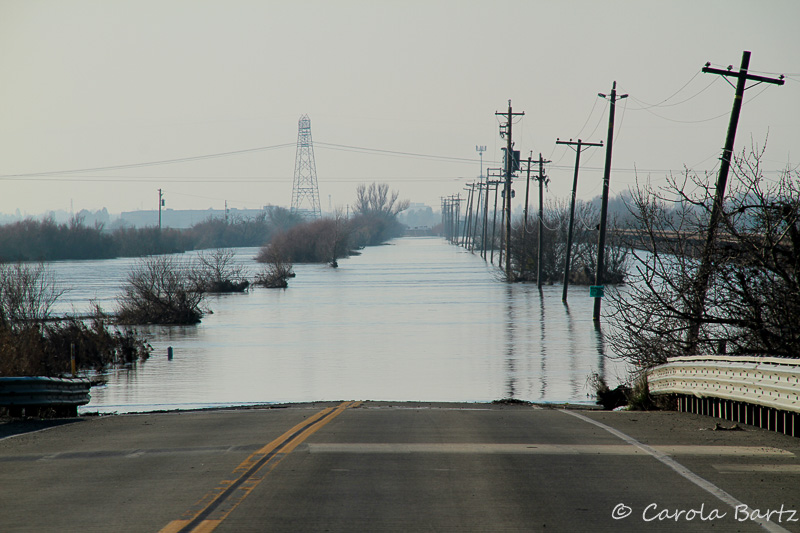 It was completely immersed in water. But where did all this water come from? It was just a small river, much smaller than the Sacramento River - it didn't even have a name on the map! 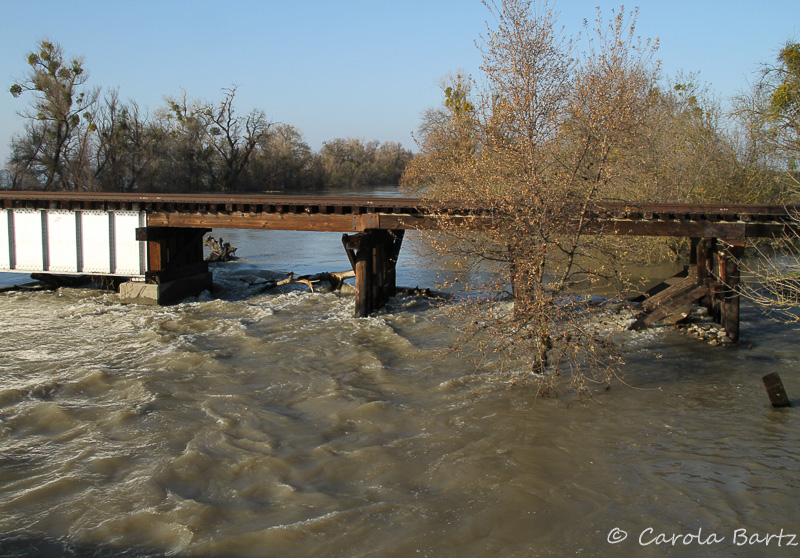 The trees you can see in the picture above mark the bank of the stream. But the water was everywhere beyond them, forming a huge lake. 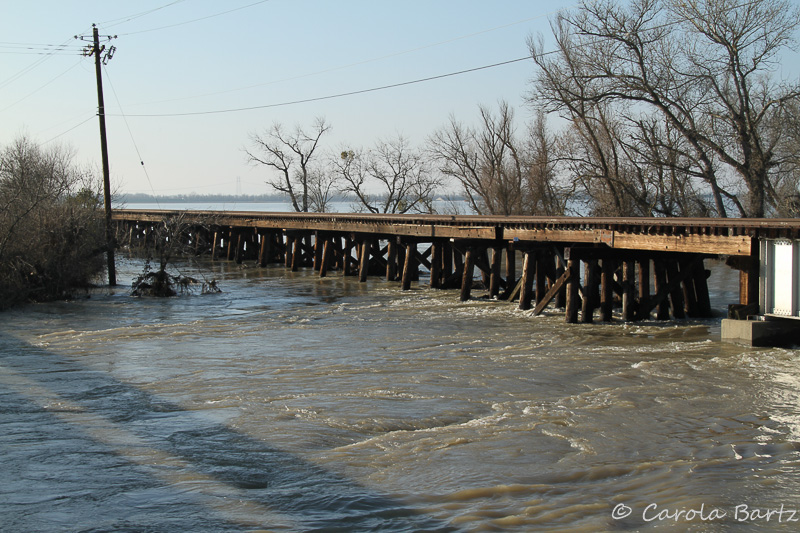 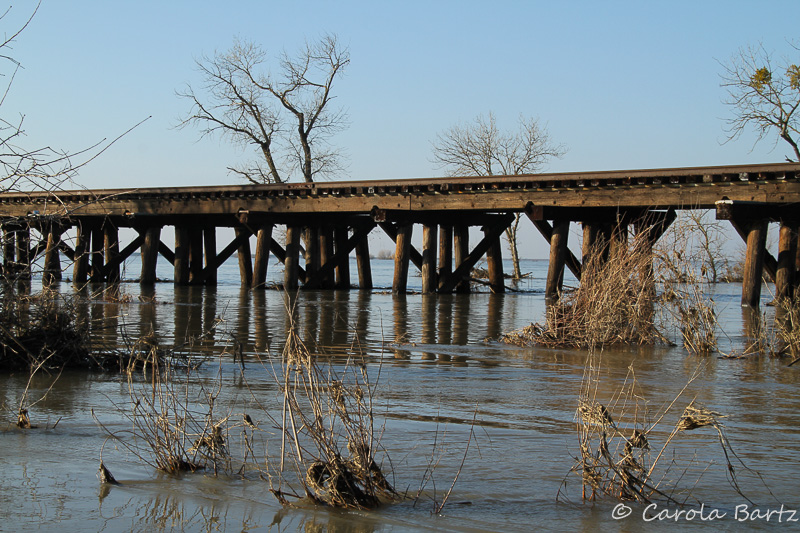 Fortunately the railroad tracks were built way above the water (they are familiar with this problem) and so is the Interstate on the other side. 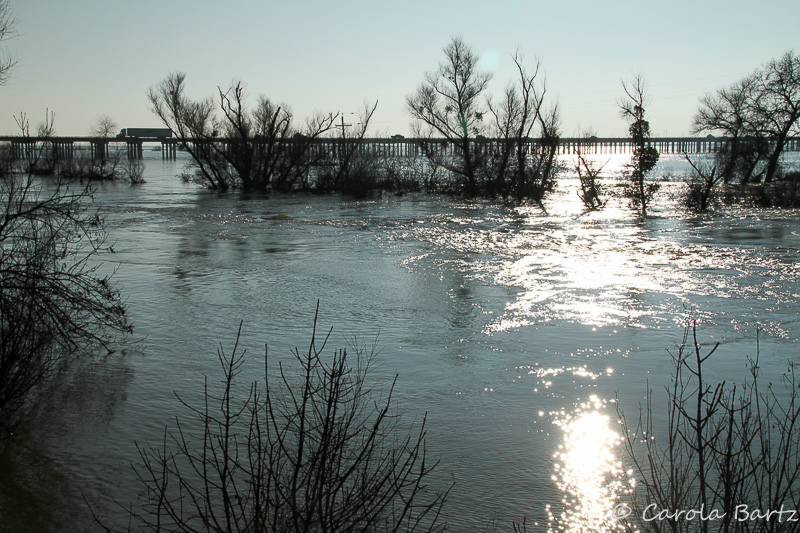 Whereas the road was just swallowed by the water. 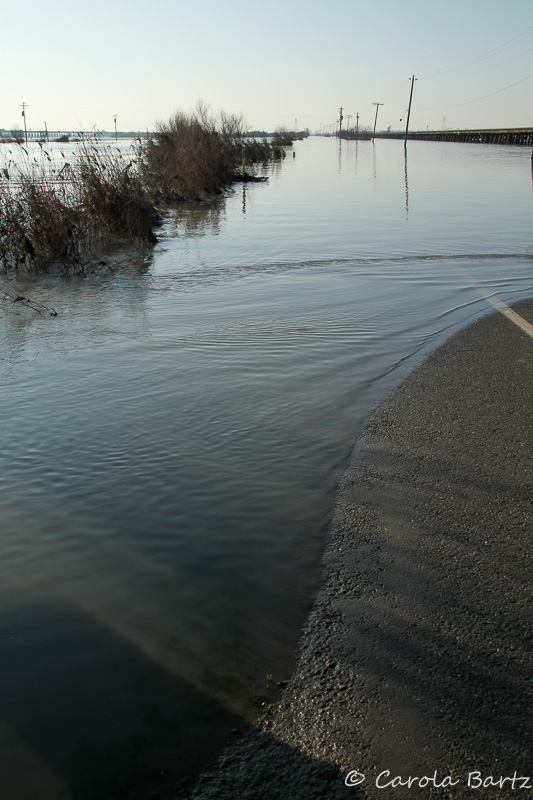 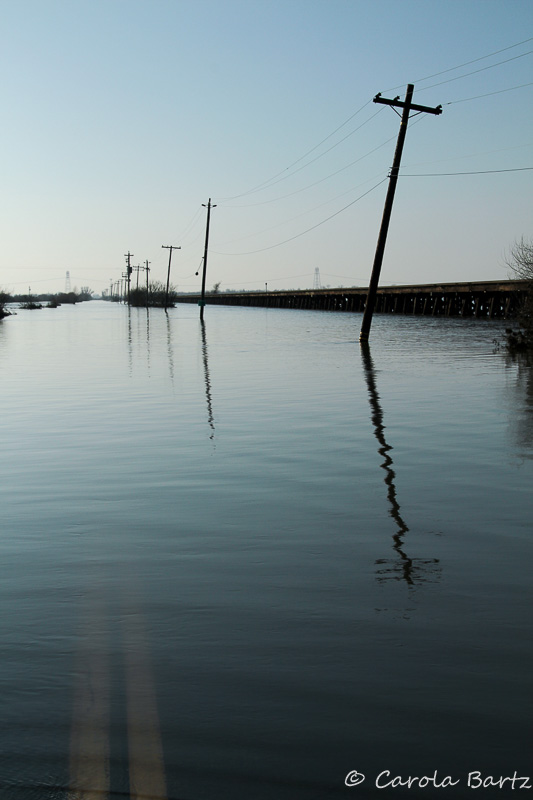 It was quite fascinating to see this - I was in awe of what water can do. It will take a while until this land is dry again. We had more rain last week, but at the moment we have a dry spell. We need it right now.

And here's my favorite girl in the world - I am so happy that I could spend my birthday with her. The best gift ever. 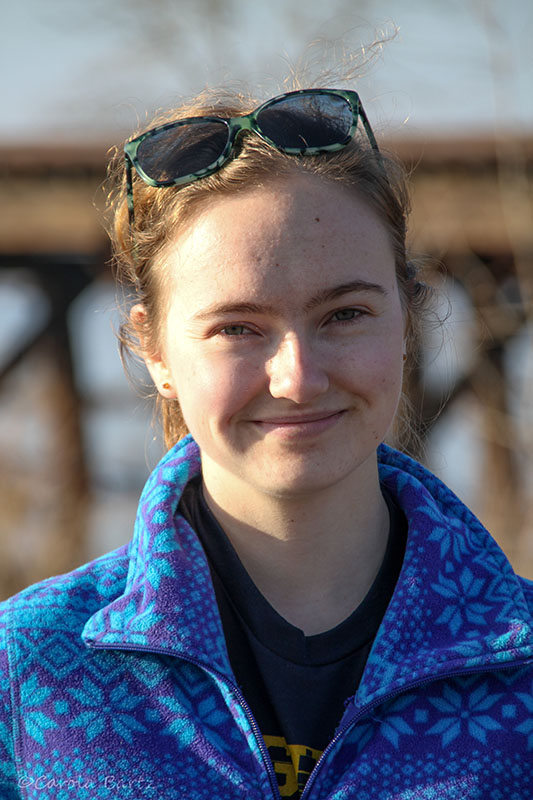 Happy belated birthday. I am so glad that you could share your day with three important people (the Geek, Kaefer and MLK).
Water is an incredibly powerful force. Beautiful, life-giving and sometimes destructive. It is absent here again, and I miss it.

Happy Birthday! So happy you had a great time at IKEA and with your beautiful daughter! I love your photos! That is scary about the road being washed away like that! WOW!!! Big Hugs!

I know its been dry in California but this is a bit much. stay safe.

Just...WOW. Unbelievable, all that water.
Your daughter has such a great smile! I found myself smiling back at her picture - I just couldn't help it. I'm glad you had such a nice birthday, and that you got to spend it with your favorite people.

Happy Birthday! Daughters are some special people, are they not?! I have one and enjoy her tremendously.

Wow -- that's some serious water. You all have had way too much -- I'll bet you are ready for a real break. But what a great way to spend your birthday (and belated Happy Birthday wishes to you!). Your best girl, a visit to the best worst store in the world (honestly, I can't control myself there and I'm so glad it isn't in my town!) and just a grand time. Three cheers for you!

The picture of the road!! OMG!! that just disappeared!!!

Oh my - your photos of the disappearing road are fascinating! It's amazing what a little water can do. Happy belated birthday!

The photos of the river road are incredible. That's a big flood.

Happy Birthday! I'm so glad that you got to spend it with those who you love!

wow wow wow!
that is a lot of water and flooding.
nice that you made a country drive out of your adventure and saw new things and the extent of the rains.

Lovely that you got to see your favorite girl in the world on your birthday!

Belated Birthday Wishes. Great shots of the river. They opened a weir on the river at Sacramento that had not been opened in about 10 years. I imagine that's where the flooding in the area you show comes from.