This February I'm taking part in 29 Faces - the first and last time I did was in February 2012, and I missed it ever since. But not this time!!!

This morning I wanted to paint a woman's face. I started out with a triangular shaped face, added nose, eyes and mouth - and while I was working on it I noticed that this face wasn't female at all. Just the opposite. 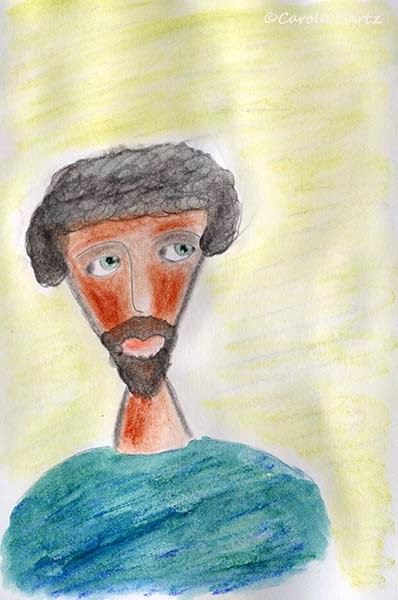 What a surprise! This Mediterranean man took shape - pretty much in its (his?) own. I've never painted a man's face before. Boys' faces, yes. But men? I didn't even know I could do that.

But here he is. My first of hopefully 29 faces. Not the man I would fall in love with, but not bad either...

His eyes are so beautiful. Like old Greek paintings. Good job.

Hi Carola. Hope you are doing well. I like your man. He looks pretty groovy. He looks like he comes from the Christian era. Nice job.

Great man's face, Carola. I don't do many either. In fact, I probably could count on one hand the faces I have drawn of men. I like the coloration.

"Your man" reminds me of a portrait I have seen on antique potteries. Maybe he is Mesopotamian or Etruscan? Good job, whomever he is or where he comes from deep inside your imagination.

He is awesome! hahaha I love it that he just showed up :oD

I really like your surprise man! I hope you have many more good surprises this month. I've only done one of these challenges before and had a lot of fun! :)

Looks pretty cute to me. I can't wait to see more!

The same thing often happens to me! I love how he turned out - he looks a friendly fellow!

It's strange that it's so much easier to draw women's faces, I do them all the time. Lucky you that managed to create a man's face!

I wonder what he was trying to tell you, just appearing under your pencil, with those expressive big eyes.
Wishing you all the best on your February task, and wondering who else will show up to surprise you.
K

Excellent! You did really well! Funny how your art pieces come out, when you are planning something else!

I find it very difficult to draw male faces - you did a great job and exciting it's your first one!

Yes, he's definitely male! That's what I like most in art: when things turn out completely different from what you planned ...

He does look as if he belongs to an ancient time. Neat1

Love his coloring! I thought of hieroglyphics.. very neat.

Well, see - you just never know what's going to happen when you jump in and try! Great job!!

I've done the project a few times and have always enjoyed it. Not formally joining in, but this would be a good month to finish my September faces project! LOL!
Rinda