This is kind of a long post, and not a completely happy one (but with a good ending, as we all know). Actually, it partly is very sad and heartbreaking.
Not what I usually write on my blog.
But this is where my heart is today. 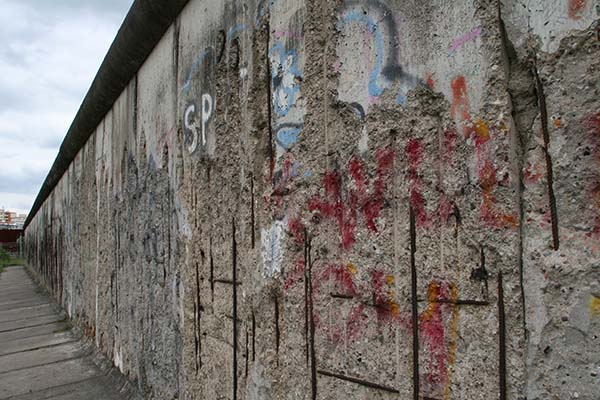 Today marks the 50th anniversary of building the Berlin Wall (Berliner Mauer).
I do not remember the actual day - August 13th, 1961 - I was only 18 months old. But I have seen so many reports, saw so many pictures, read so many articles about it that I know how traumatic those days in the middle of August were. Especially for the Berliners living in the Soviet sector of the city.
You all know the history of the Wall.
Built as an "Anti-Fascist Protection Rampart" ("Antifaschistischer Schutzwall") by the government of the German Democratic Republic (GDR, East Germany), it completely cut off Berlin from surrounding East Germany and from East Berlin. The East German government claimed the building of the Wall as a protection for the people in the GDR, but in truth it should prevent the massive emigration from the East to the West that was going on in post World War II Germany.
It divided my country for 28 years.
Until that joyful day, when, thanks to the peaceful protest movement of the people in the GDR, the Wall fell down, November 9th, 1989. 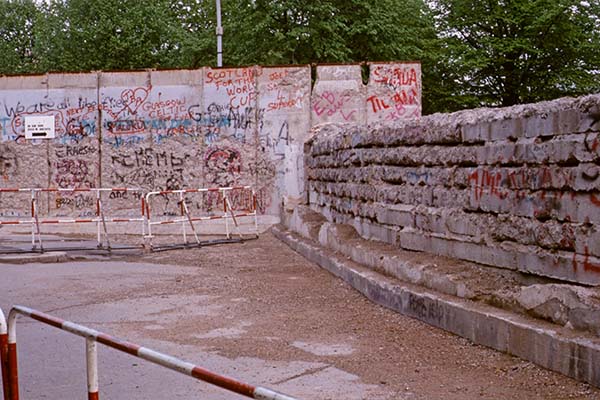 I took this photo in spring 1990, when officially the GDR still existed. The white sign on the left reads "In die DDR 200 Meter rechts" (To GDR 200 meters on the right). What a farce!
I took many pictures of the Wall, most of them in the 70's and 80's, but unfortunately they either got lost during our move to the States or they're doing a really good job in hiding. 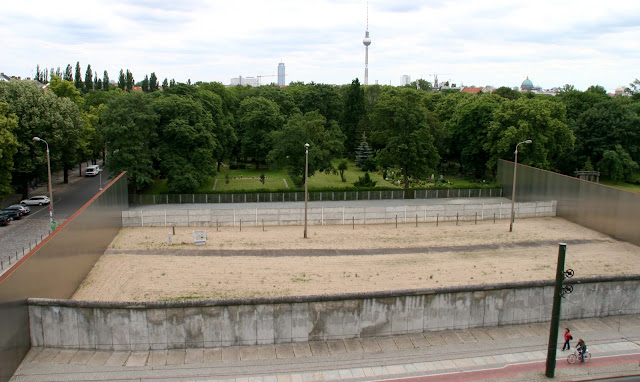 This is a tiny part of the Wall that now belongs to the Wall Museum at Bernauer Straße. In front you can see the wall facing West Berlin, followed by the "death strip" and then a second concrete wall, the hinterland wall. The Wall actually was two walls with a huge area in between, lined by guard towers and completely illuminated by night. 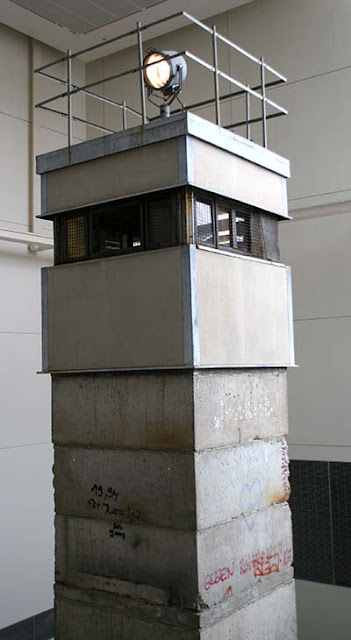 This is one of the guard towers. It now stands in the Newseum in D.C. 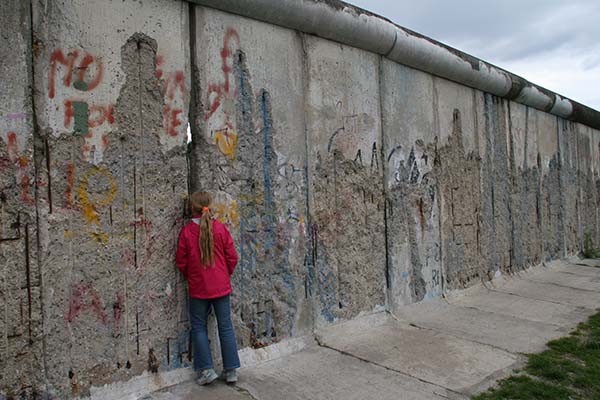 Peeking was not allowed, and not possible anyway.

What can you say in the face of such ugliness?
The human tragedies were heartbreaking.
Families were divided. People desperately jumped from windows to the West before those windows were "walled". One of the most famous photos of those days is of a East German soldier, Conrad Schumann, jumping over barbed wire to freedom - a desperate act. People tried to save just their life and left everything behind.
On August 24th, 11 days after the beginning of building the Wall, 24-year-old Günter Litfin was the first person who was shot to death while trying to flee the GDR by crossing the Wall. He was followed by at least 135 more people who were dreaming of freedom and found a violent death instead.
There are crosses to remember them. They were erected among the modern government buildings, where the Wall used to be. 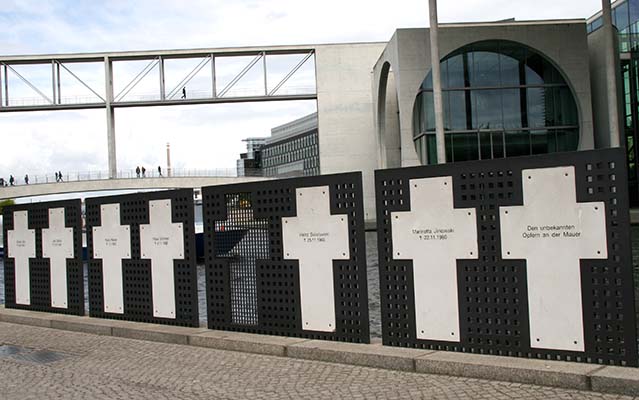 It pierces my heart. 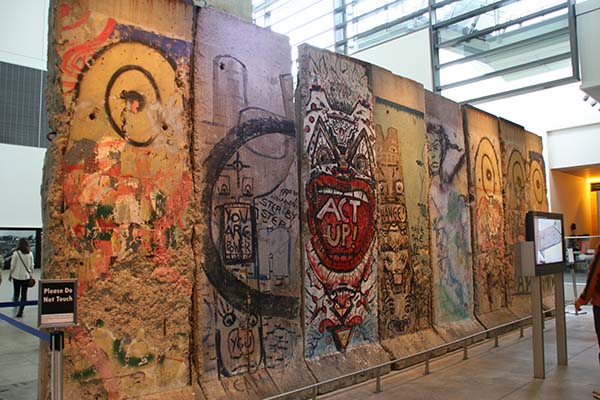 You can find this part of the Wall in D.C.'s Newseum. There is an entire section about the Berlin Wall.
It's one of the most interesting museums in D.C., by the way, and a must if you're interested in the news. 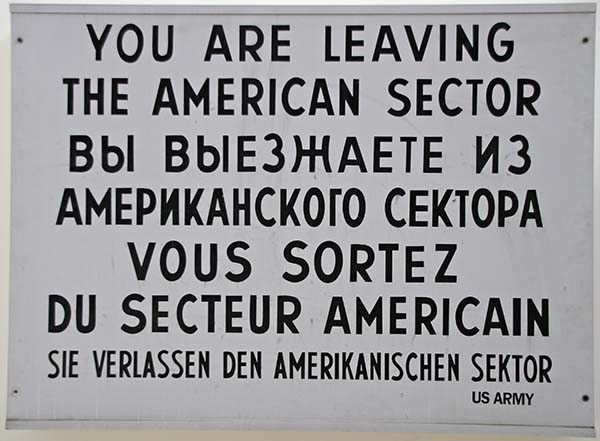 Brandenburg Gate belonged to East Berlin. The quadriga on top always faced the east, so we could never see it from the front during those 28 years. 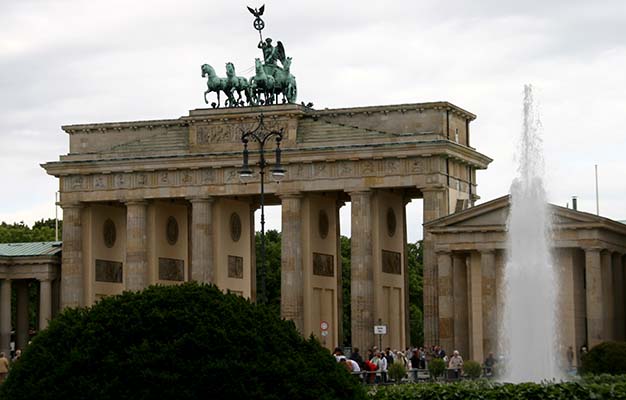 It was a good day when I could finally see it from the "right" side and stand in Pariser Platz like any normal person in any normal city. 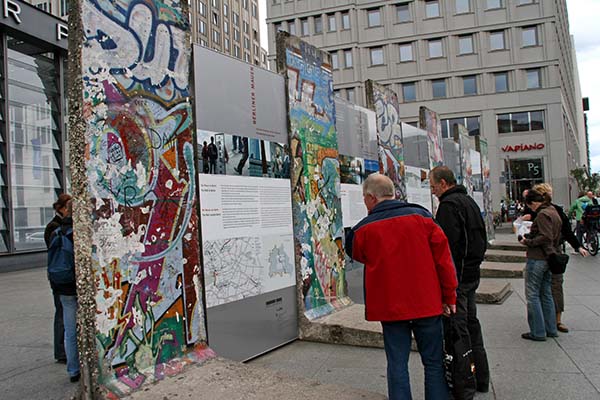 This is Potsdamer Platz.  It was one of the liveliest places in Europe before the war. Then it was divided, the Wall ran right through it and the whole area was deserted - a vast emptiness. Today it is modern and lively again, not necessarily pretty but interesting. A few parts of the wall are left here where the original wall used to divide the area. As you can see the Wall was built of individual huge blocks of concrete, and here you can also see how high it was compared to the people standing next to it. 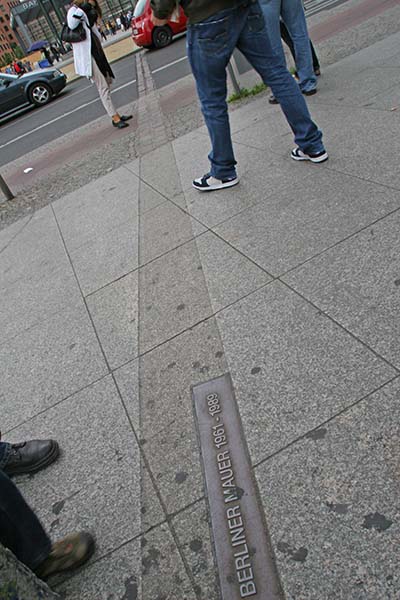 The shaded stripe reads "Berlin Wall 1961-1989" and runs exactly where the Wall used to be. It ran right through the heart of the city.
It is difficult to imagine that today, more than 20 years after the Wall came down. 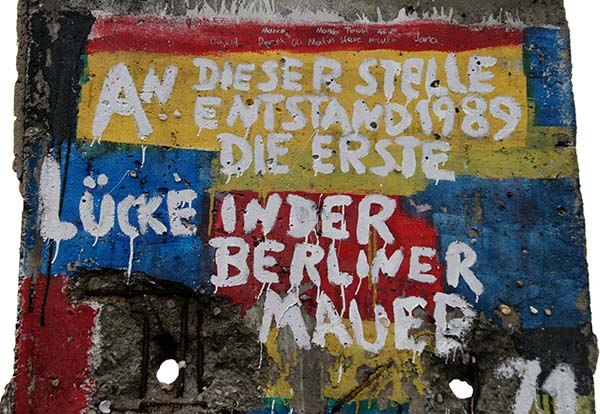 The writing on this part of the Wall says "In 1989 the first gap in the wall was created here" - I don't know whether that is really true, but it doesn't matter for me. They had started somewhere...
And today? 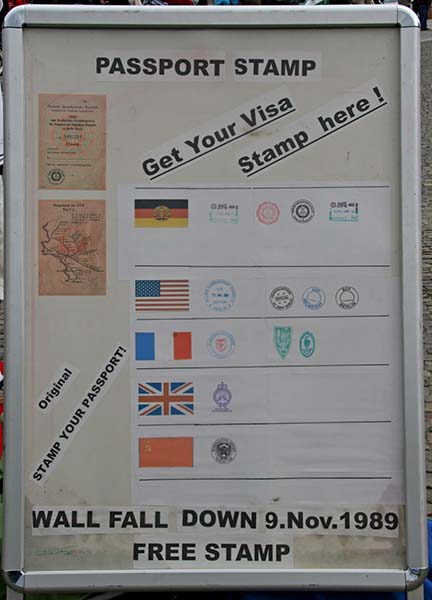 Today you find this when you visit Pariser Platz at the Brandenburg Gate.
I really don't know whether I should cry or laugh about it.
My history is connected to the Berlin Wall. I grew up with it, I feared it, I hated it.
I grew up with two Germanys.
The GDR was more foreign than any foreign country.
Whenever I come close to the old border and the few places where you could actually cross it (with long waits and sometimes lots of humiliation) I still shiver.
And I'm grateful that it's history.
.
﻿
Posted by Carola Bartz at 1:00 AM

Thank you, Carola, for reminding me.
Such unreal times they were and yet so horribly and desperately real.

Carola,
This is such a compelling and interesting post. You have given me a different perspective of the Wall. As painful and terrible as all of it is, I'm really thankful that you shared your photos and your story here.

I remember when the wall was first built and the astonisment that anything like this could be happening, and then the joy when it first started to be taken down by those brave people. It was a tragic time, so many lost their lives trying to get across.

What an amazing post. Sounds like it was a bitvdifticult to write. Thanks for doing it.
Rinda

Thank you for sharing these photos and your memories... It's interesting to hear the perspective of someone who grew up there.

It's interesting to read about this from your perspective. As a child grwoing up I was always astonished that such a thing could exist. And yet now they have a form of it in Belfast. Not with the watchtowers and guns, sure, but separating communities to stop them killing each other. There is something very flawed in the human race. It was a euphoric few days when the wall came down, and must have been so much more so for those who were there. When we visited Berlin in 1996, just a few short years later, we had to search to find even a piece of wall, although we visited Checkpoint Charlie, of course, and were humbled to read the stories of those crossed over (or not...).

impressive series Carola, you grew up with it didn't you?

Thank you for sharing your photos and perspective. My mom cried when the wall came down. She had grew up in East Germany, but got out in time as a young adult. I remember it being a big deal when she went back to visit her mom and family. I'd love to see the museum in D.C. Wonderful post.

Wow, Carola thank you for posting this. I had known of the wall but never knew the sad details. Yes something is still flawed in the human race, but thank goodness we are slowly evolving to be able to tear these walls down!Deb

Such a poignant, heartfelt post. Really interesting to read your feelings. I remember well when it came down and one of my DDs pen friends was there so when she came to visit us she brought a small piece to give to my daughter. It is now back in Germany with her.
Thank you for sharing such an intense story.
Thank you also for your thoughtful, caring comments on my blog too.
Jo x

Thank you for sharing this compelling post! We take our freedoms so for granted and really need to be so grateful! I was born in '62 so have a sketchy knowledge of the beginnings but can remember when it came down. Your photos are so great and I am glad you shared them!