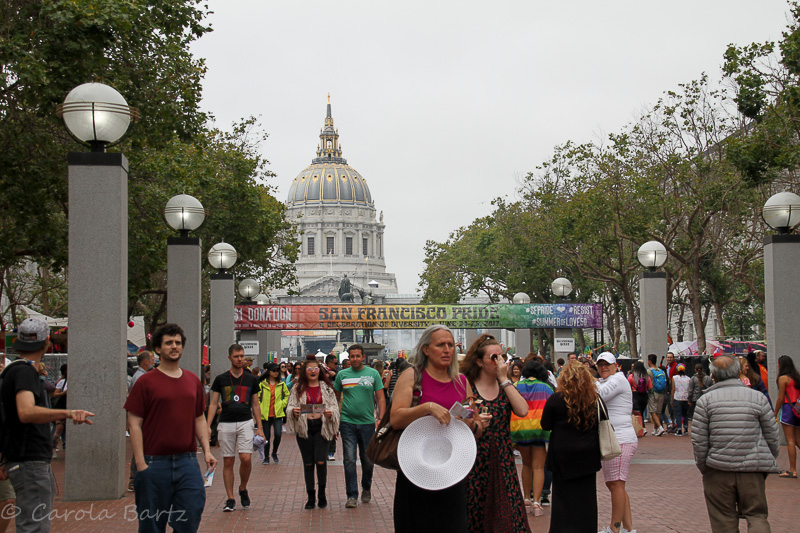 June is Pride month and last weekend the Pride Parade took place in San Francisco. Kaefer wanted to go, and so we took her and a friend of hers down to the city and watched the parade and the festivities.

It was a joyful affair. Of course it was crowded which I don't particularly like and even tend to panic, but the "panicky moments" were fortunately only few and most of the time I could simply enjoy this colorful event. It was rather cool in the morning with a chilly wind - rather typical for San Francisco - but it warmed up eventually and became a sunny day. 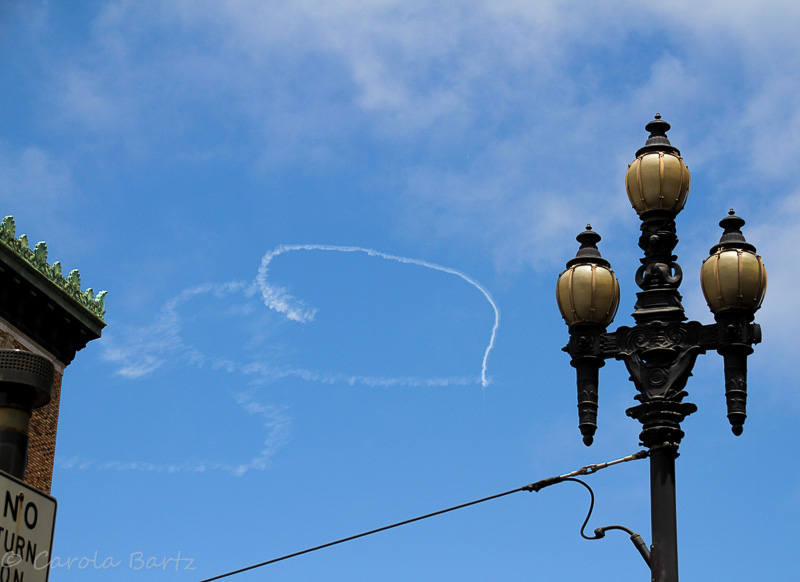 The mood was joyful and I felt a very positive vibe. I loved people watching, taking in the creativity many people showed. Of course it was colorful, rainbows everywhere! 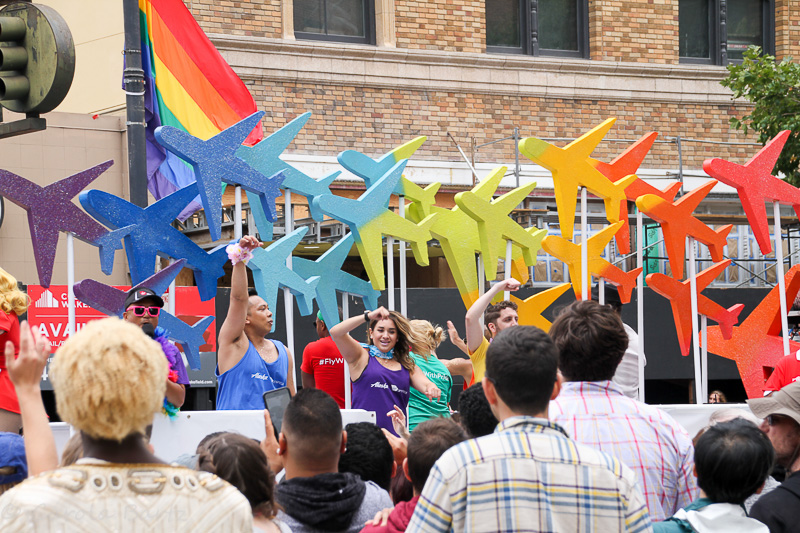 The parade was fascinating, full of great music and laughter. 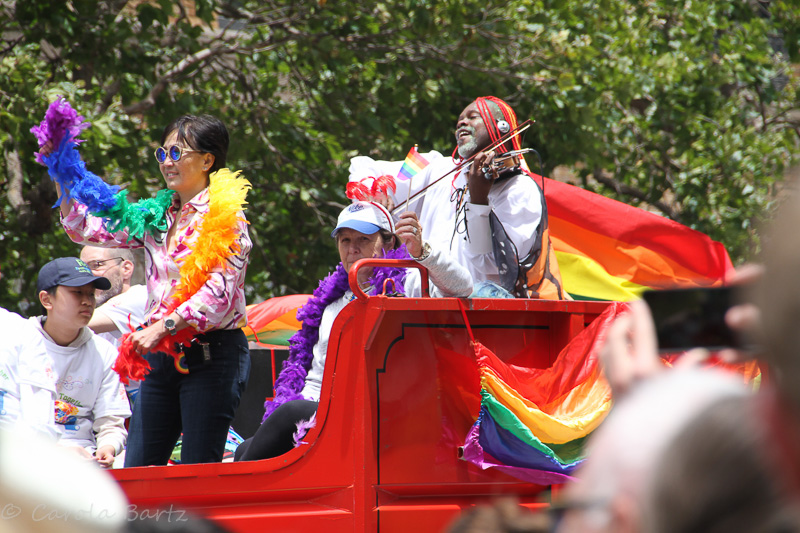 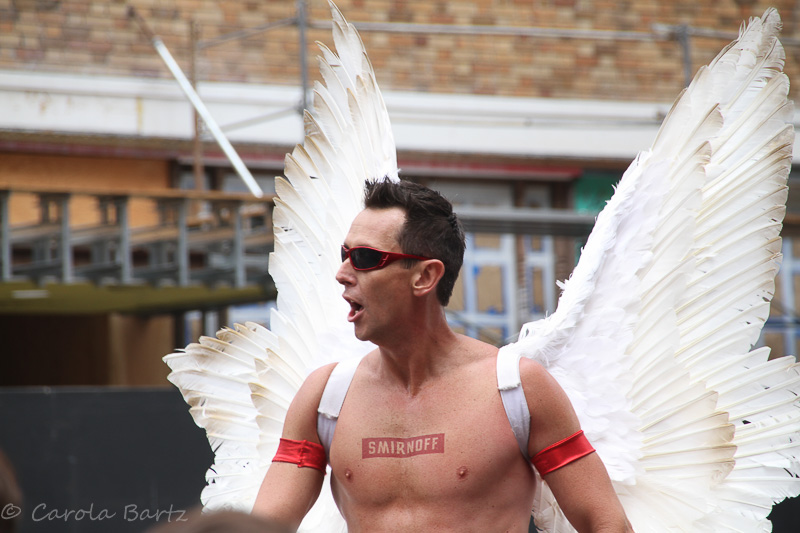 Here are some more snippets that represent the color and joy of this festival: 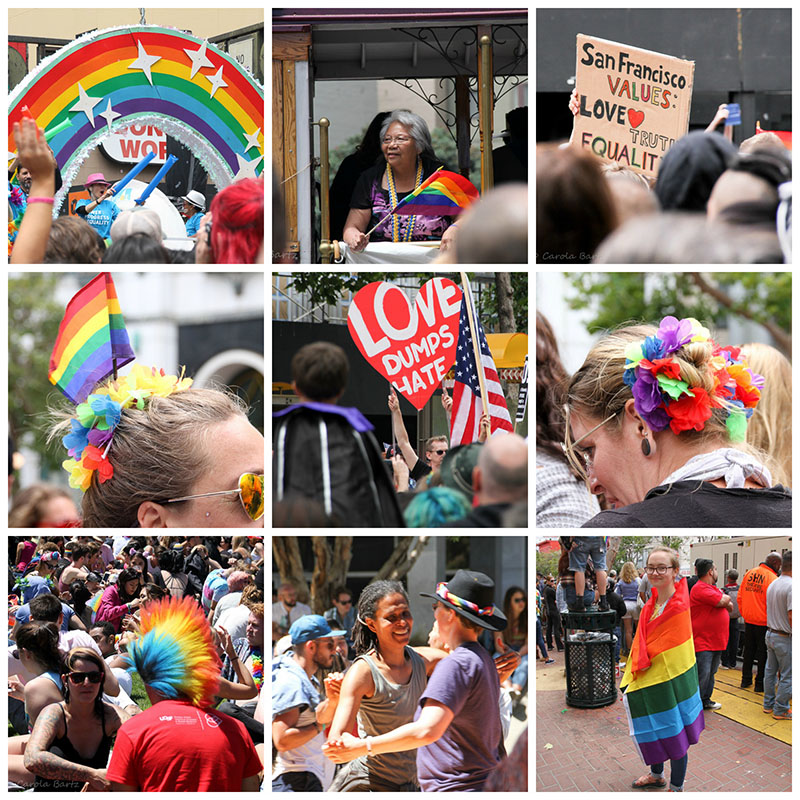 I especially enjoyed these two guys with their colorful dogs! 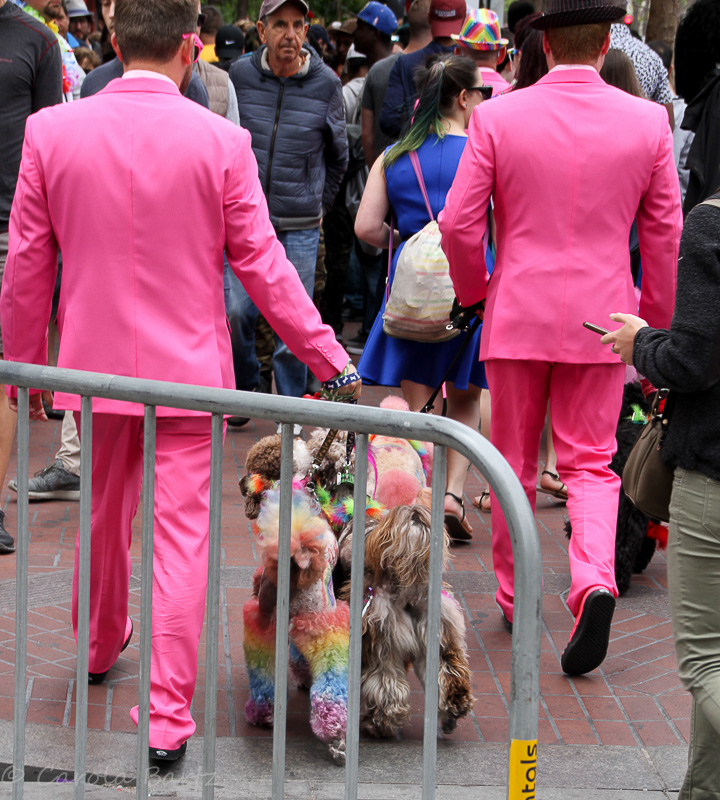 Even some of the police officers carried pink handcuffs. I loved this little detail. 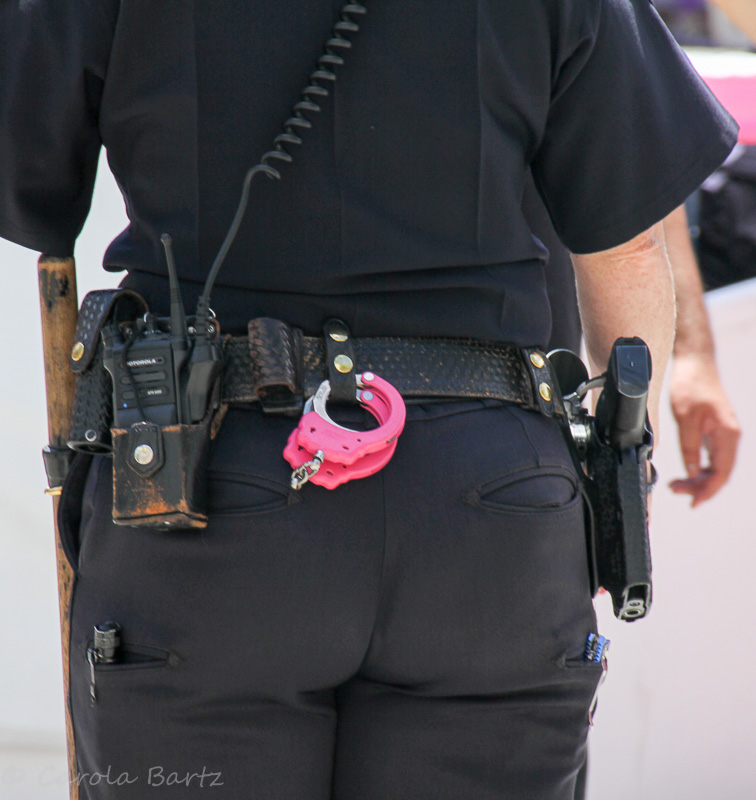 While the girls enjoyed the parade on their own, the Geek and I strolled around the Civic Center where all the booths (and the food!) were until we ended up near the dance floor. The dancing was fabulous, and we even ventured onto the dance floor ourselves and learned some line dancing. How fun! 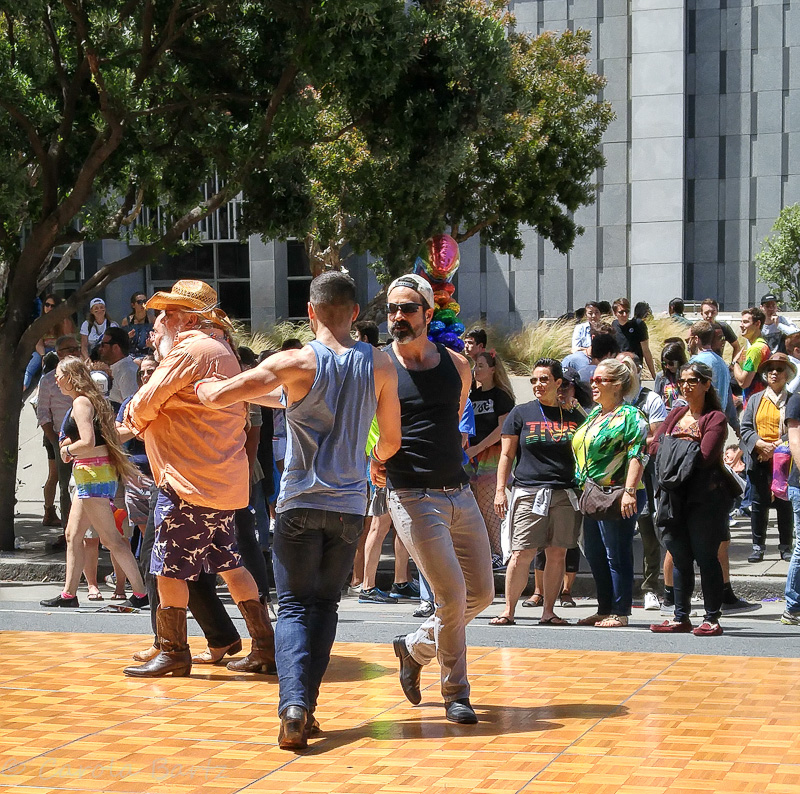 This definitely was my favorite part of the day! 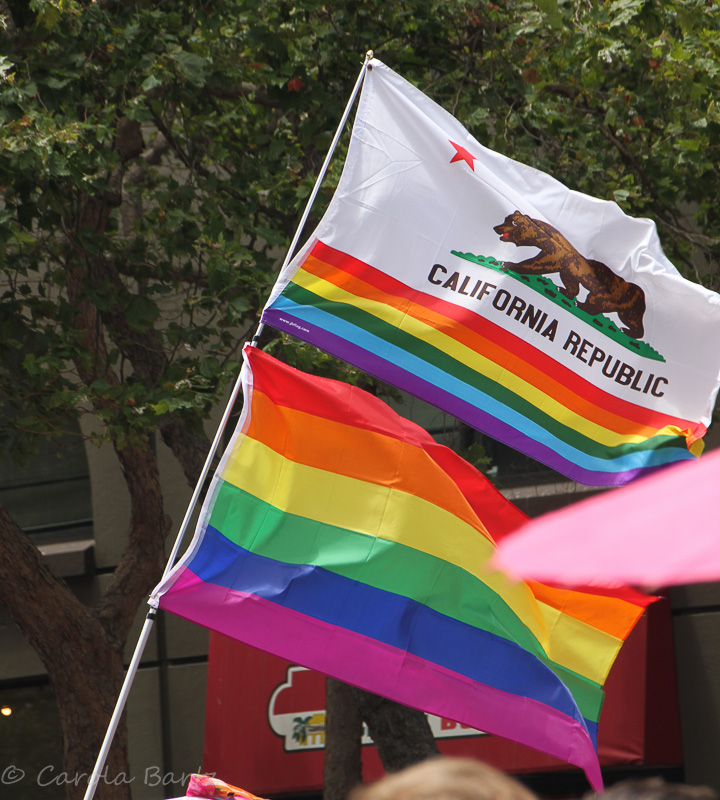 After we had met up with the girls again it was late in the afternoon and we decided to bring the day to a tasty end by visiting our favorite German restaurant in the city, the Suppenküche (soup kitchen). The food is very authentic here and absolutely delicious. 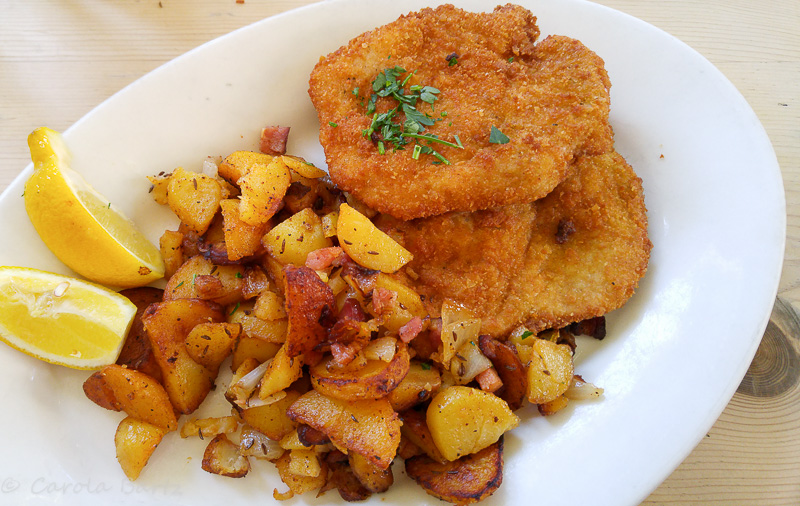 We had Wiener Schnitzel mit Bratkartoffeln and the Geek and I enjoyed some Erdinger Hefeweizen - the dark one was mine. Their selection of beer is so good - you can check it out here. Prost! 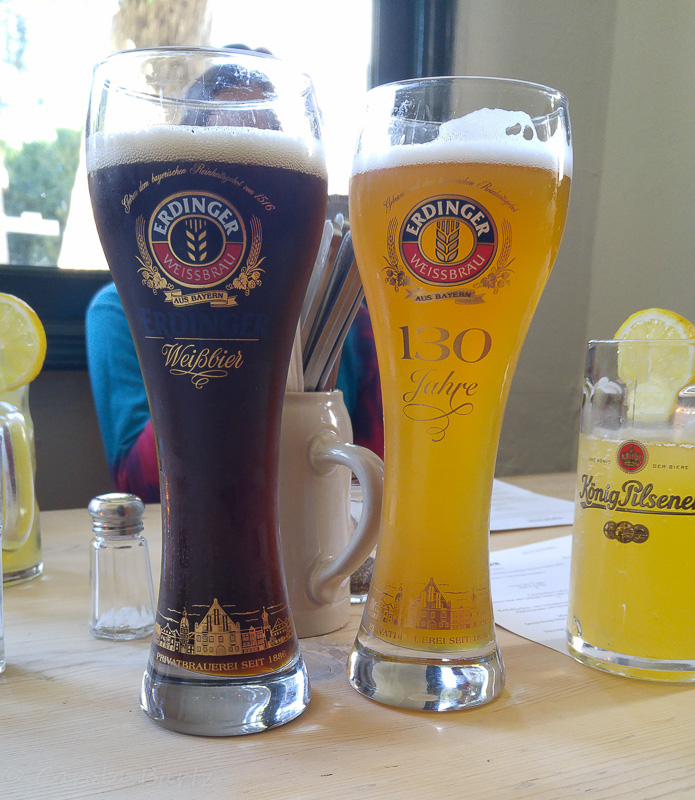 What an adventurous weekend. Line dancing, any dancing, is challenging for me :)

What a lovely, colourful WONDERFUL day.
Thank you for sharing the joy.
I am with you on the crowd front too. I find them difficult. Even happy crowds.

Jess had a line dancing song at her wedding, and I joined in and was so out of place. I finally got the hang of it towards the end of the song haha. Your meal looks scrumptious. and the beer so good on this hot day in California. : )

I love the colors! The pink handcuffs are the best -- good for the SF Police! It looks like such a peaceful happy parade. I'm so glad.

Peaceful, colorful, joyful, beautiful. Perfect! Thanks so much for sharing.

What a fun day! Loved the pictures!!! Pink handcuffs! LOL! I would have been dancing too!
Just to let you know, you commented on my blog about my crow in my banner. It's called the Crow Of Transformation. So you see a person and a crow. It speaks of emergence and new beginnings. Big Hugs!