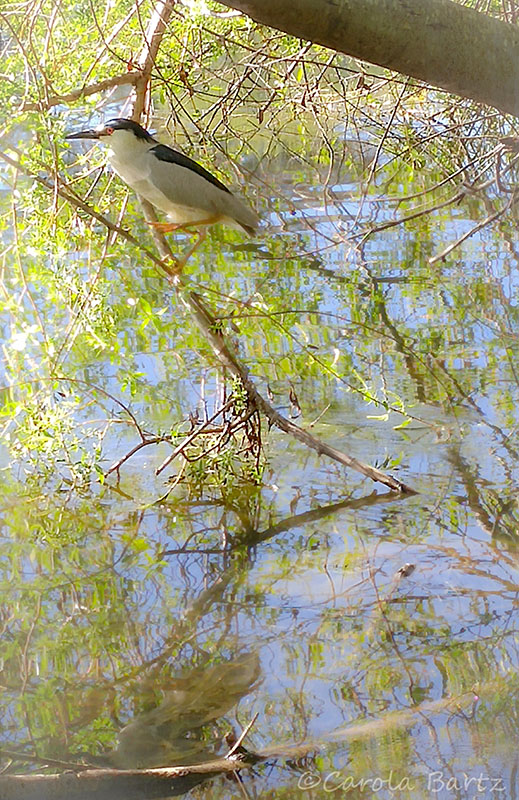 March was a better photography month than February and all of the winter months. It's so much easier to get outside when the weather is nice and nature is coming back to life.

When I looked through the photos I took in March I realized that I had photographed a lot of meadows and particularly trees. But it was this one that stood out - and it's not even a very good one. Taken with my phone and zoomed in, even though I know that my zoom is crap and the pictures are mostly a big disappointment. However, this one captures a Black-crowned night heron, one of my most favorite birds and the first one this year I discovered at the lake.

I don't know what it is about these birds that draws me to them. They're pretty - white and very dark blue feathers, orange feet, stunningly red eyes, yellow-orange feet and two or three long white plumes at the back of the head. They are smaller and stockier than most herons and have shorter bills. It's the "small fat" cousin of the proud and elegant Great blue heron. However, they're not as shy as the Great blue and don't seem to be disturbed by people so much. I often could approach them pretty close without them moving an inch away from me. Most times they were far more interested in watching what was going on beneath the surface of the water and catching their food quickly with a short shot into the water.

Perhaps it is their stoic patience that attracts me. Their ability to remain in the same position forever without moving a single feather (so to speak). Their complete and utter disinterest in me. Sometimes I convince myself that they actually know me - "the crazy lady with the little black box that she points at us" - even though I know perfectly well that they simply don't care. They seem to be at utter peace with themselves.

Zen is the word that comes to mind.


I'm joining Sarah and León for Scene and Story again as I try to do every first Sunday of a month. You can find more stories here.

I love seeing different birds, makes me think about the ones we have here, and how I should photograph them more often. Thank you for sharing!

Yes! I love your bird and branches, but I especially love the mirror image in the water.

I used to see these birds when I lived in a condo on the other side of the river, near a cascading waterfall. There was no way to get close to them as they perched on rocks mid-river with the rapids swirling all around them. One day as I was wishing I could see them better, one flew up and perched on the fence in front of me, not six feet away, as if he had heard my thoughts. I had no camera, but I've never forgotten the moment. I loved seeing your picture to remind me! They are beautiful birds. Thanks for sharing your Scene & Story.

I agree with you about the weather in March vs. February. This is a great shot, especially zoomed in from a cell phone! Pretty bird!

Your Zen bird is pretty in its formal wear. I also like the green on the trees!

I love this: " Sometimes I convince myself that they actually know me - "the crazy lady with the little black box that she points at us" - even though I know perfectly well that they simply don't care."

Being one of those crazy ladies myself...I had to smile.

Such a beautiful bird!

Lovely.
I find my zen in birds (and nature) often. And am so very grateful.

I think that your shot of the night heron is a very good one. The name of this bird is one that i find attractive, and i enjoyed watching one in SC once that sat forever in a swamp waiting for the right bit of food to come along. Yes it does have a lot of patience. You are lucky to live in a place that you see these. Thanks for sharing!

Last year we were camping in Petaluma and this little fellow's look alike was there. Because he was so still, we got some pictures too. We just never what kind of bird he was. Thanks for helping us out with that.

I love birds. I am jealous that they can fly and I can't. I was surprised to find this was a heron since I was only aware of it's larger cousin the Great Blue Heron. This Black-crowned Night Heron is a beauty. Thanks for sharing and teaching me more about this bird.

This is just a spectacular photograph.

I really like the soft blues and greens in this image - that lovely springtime feel and can feel your connection to this immobile bird!

I really like this image - it took me a moment to focus, but then I was able to discern the different textures being brought out between the reflection in the water and the actual tree. I love this picture!

The only herons I tend to see around here are the long-legged blue heron (Harry!). But I know what you mean about their patience and ability to stay still for so long -- he does that too.

Meanwhile, this photograph is magnificent. They're a beautiful bird aren't they? You captured him perfectly!

Our phones end up getting some of our favorites because they are readily available and I'm so happy we all accept that! I enjoy birds so much I'd be thrilled to have this photo and the experience.

Beautiful! I would live to see this bird!