Evening at the Lake 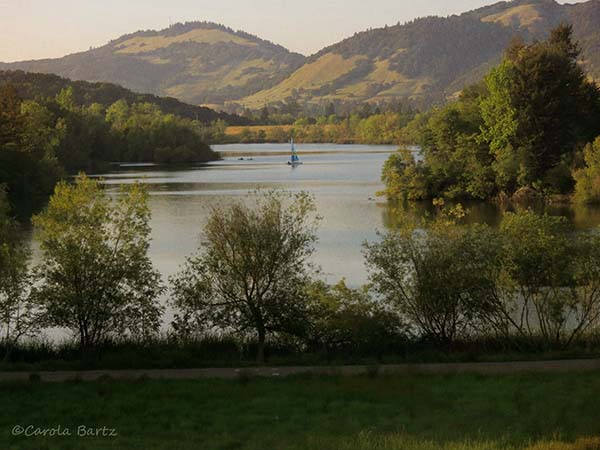 On Saturday evening we celebrated Kaefer's 15th birthday which had been a few days before that. She had invited her best friend for a sleepover and in the evening we went to the lake for a picnic.

It had been a beautiful, sunny day, and the evening was lovely as well. Not so warm any more but still nice. We chose our usual picnic spot with a great view of the lake. The water was quite still, and the slowly setting sun basked everything in a warm light.

The turkey vultures were quite active. Some of them flew again and again into a tree next to our site, but they never stayed long. 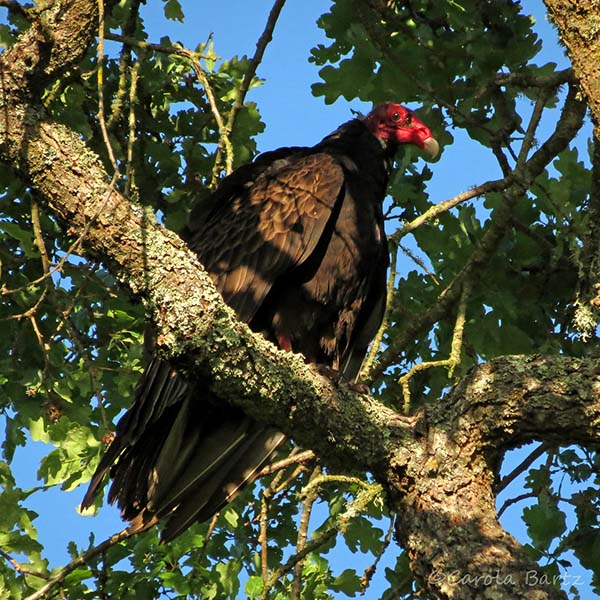 One of them obviously thought that he was tired of roadkill and scavenged the barbecue at the picnic sites. It was rather interesting to watch. I was surprised that he went for the barbecue, especially since we were so close by. Usually, turkey vultures are rather shy and fly away as soon as you get close. Obviously the remains in that barbecue completely outbeat any fear of us (the people who were there before did not clean up the site very well and left quite a lot of trash; this is something I find totally rude and selfish). 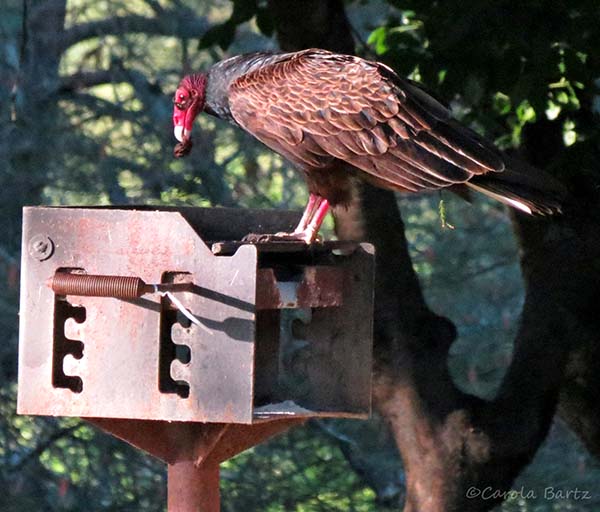 This is my Photo of the Week

When we were done eating, the girls did some exploring... 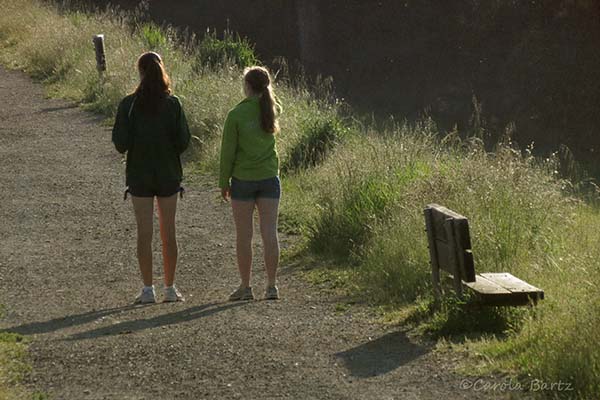 and I left with camera in hand while the Geek preferred to stay at the table to read. 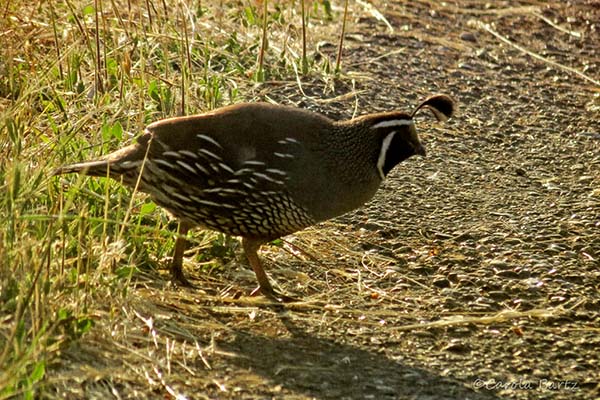 and beautiful spider webs in the trees right at the lake. 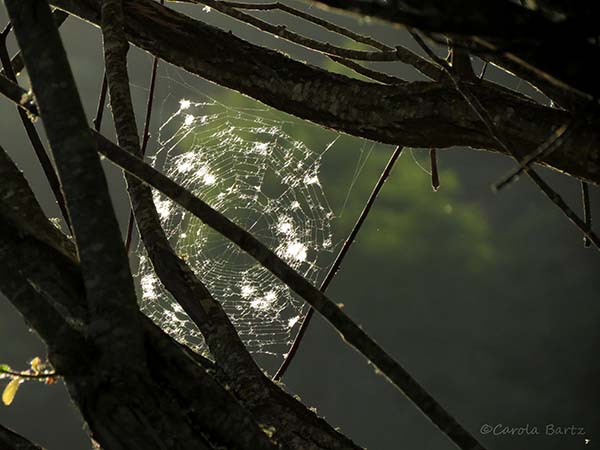 The two older couples who were watching the sunset I found rather touching. 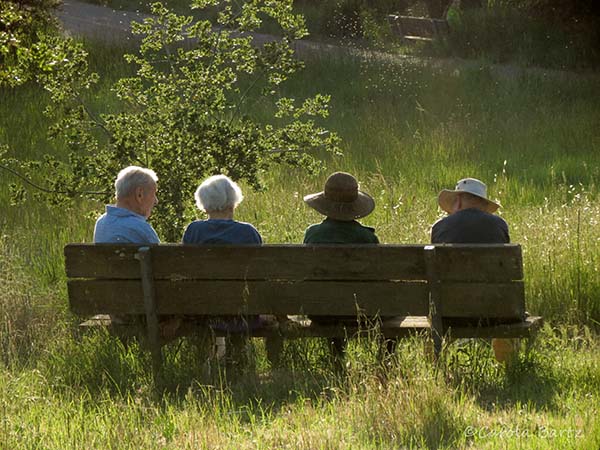 When we finally went home again, there - of course - was cake. Orange-chocolate cake with chocolate shavings on top. Kaefer's favorite. 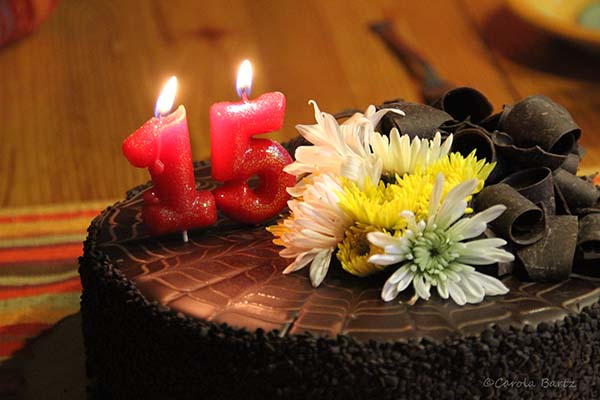 Love the pictures, espcially the quail and the turkey vultures. And the two elder couples are so touching. Great pictures of a nice day.

Very nice. I enjoyed my visit. Happy Birthday to Keefer and it's a beautiful cake. Yum! Now I'm hungry for cake. Love the great photos and thanks for sharing.

I find it so rude too, when people don't clean up after themselves!!!
I love all the pictures! What a beautiful spot! The picture of the older couples touched my heart too ;o) Love the spider web ;o) Happy birthday Kaefer ;o)

Happy Birthday wishes to your girl!
How exciting and what a beautiful spot for a celebration. Those quail have such lovely feathers, I think I like them better than the turkey vultures!

What an absolutely magical day. Thank you so much - and belated happy birthday to Kaefer.

Happy Birthday to Kaefer and what a lovely relaxing time she had for her celebrations. Sadly too many 15 year olds here in the city are like 25 year olds and off to discos in stretch limos for their parties.
Beautiful photos many so emotive.You have such a good eye for seeing beyond the frame.
love Jo x

Happy Birthday Kaefer! What a wonderful evening! Your photos are spectacular, and I can see why that Turkey Vulture is your photo of the week, although only just ahead of your beautiful quail! Finally, that cake looks amazing! Bet it was delicious too!

What a beautiful visit - thank you for sharing, and Happy Birthday to Kaefer!

It sounds like a beautiful day. Happy birthday to Kaefer! I love your photo of the quail and the cake looks oh so tempting...

I love quail, too. They seem like they would be fun to sketch.
Rinda

What a lovely evening for a birthday celebration! The light you captured is just beautiful. You managed to make the turkey vulture look good too!

what an idyllic day! Such lovely pics to remember it by...

whoa...check out that vulture....love the quail too. The shot with the people on the bench...ohhh and that CAKE....