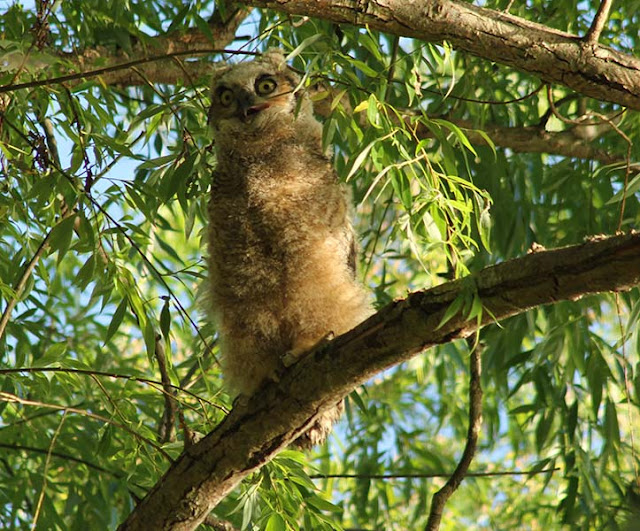 A surprise was waiting for me when I went to check on the Great Horned Owls yesterday evening, and of course I wanted to inform you about that at once, but unfortunately, Blogger was down for a very long time - the "fallen" owlet that had been taken to the Bird Rescue Center last week's Wednesday was back!!! I had thought that they would release it when it was much bigger, but I guess that it was worth a try to reunite it with his family. Thus, it can learn all the life skills it will need to survive from its mom. 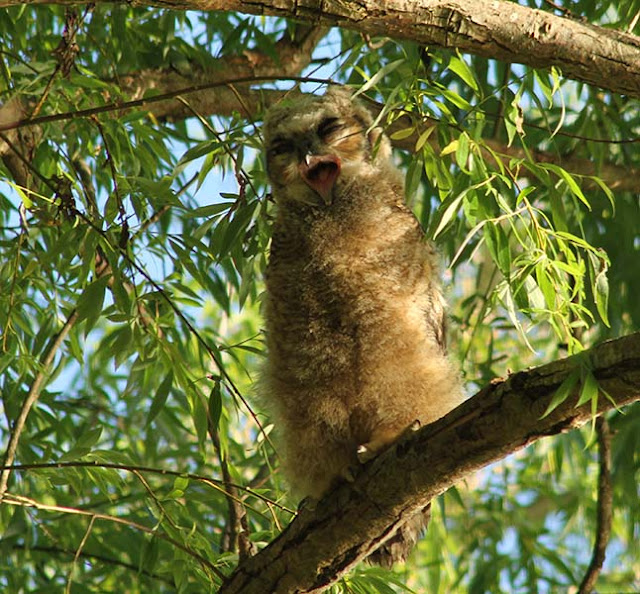 It was sitting in this tree and was obviously quite tired - and hungry, I think. It was released the night before and it seems that Mama Owl hadn't fed it yet. I was a bit worried that its parents would not accept it back to the family. Here's a look through our spotting scope: 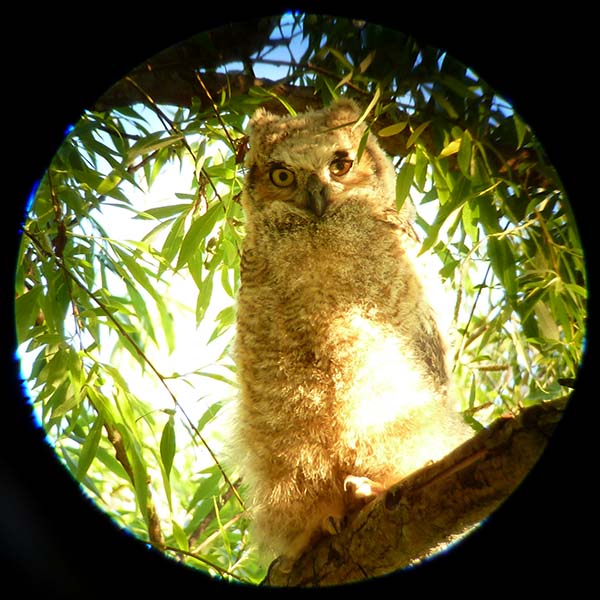 Yep, with a good point-and-shoot camera you can take decent pictures through a spotting scope! We let a woman with her iPhone take a picture this way and that one turned out nice as well. So if you ever have a chance to do that, give it a try.

Mama Owl and the other owlet were still perching on the eucalyptus tree, their "home tree". 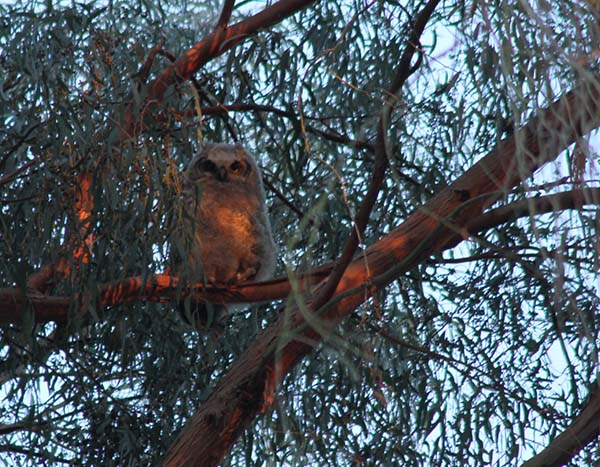 With the half moon behind the tree I thought it was worth a shot, even though it didn't turn out very well. But moon and owls just go together, don't they? 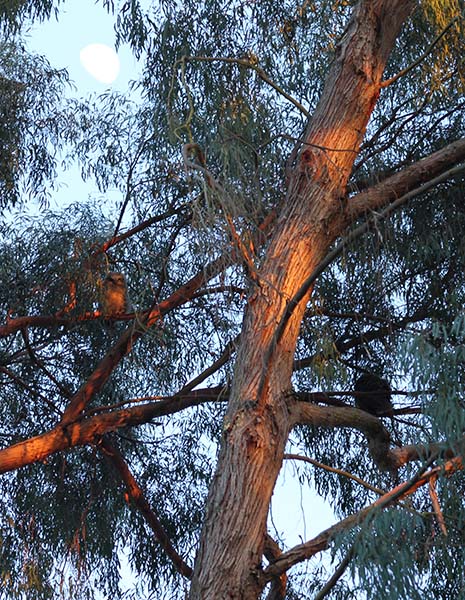 This morning I returned to see how the rescue owlet was doing. I was hoping that Mama Owl would take it in again.

I had a hard time finding the owls except for the dad who was sitting in his usual spot. Then I discovered Mama Owl and one of the owlets who turned out to be the bigger one, not the rescued one.  That one I spotted a little bit later high up in a redwood tree. It was hopping around, jumping from branch to branch, spreading its wings - and then it lost its balance... oh dear... was there another drama unfolding? 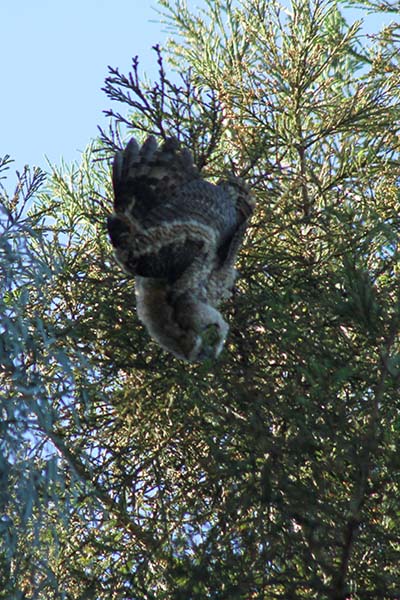 It was hanging upside down, flapping its wings until it lost its grip and trundled down - to the next branch where it flipped and sat upright again. Thank heaven! It's not that easy to fall down a redwood tree because of all its branches that are in the way - inconvenient for us photographers, but a life-safer for owls. I prefer it that way.

The owlet finally moved closer to the trunk of the tree where it seemed to settle down - and shortly after that Mama Owl came over and perched nearby, only three feet away. So she does care for her lost baby. It was good to see that. 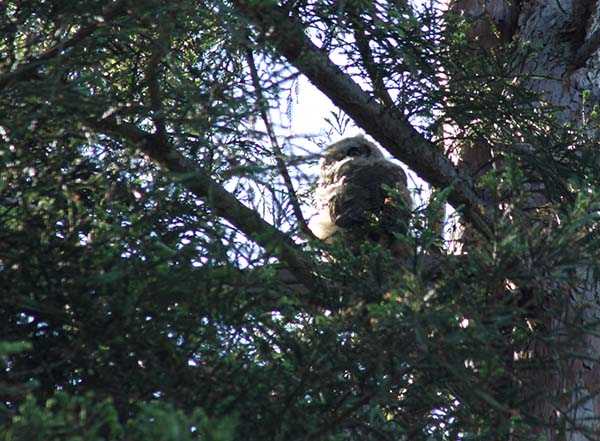 Wow, this is quite the drama! I am keeping up with it in all your places, thanks for updates.

This is quite the saga, Carola. My oh my! But what in the world is a spotting scope? I have no clue what you're talking about!

If I were anywhere near that owl family I would have a hard time staying away.
Your photos are wonderful. Thank you so much for the updates

This is such a compelling story! I hope there is a happy ending.
Rinda

Oh what a heart stopping drama, it's been that kind of morning for me, animal drama! Over at 'the angel wears fins blogspot' Noelle posts about her little cat who's had a bad accident and now this!

What a wonderful post and photographs, you are such a talented photographer with the natural ability to provide a great storyline too!

Visiting you from The Kat Eye View -- what an amazing series of photos. I really hope the little owlet continues to thrive. :)

I can't believe you caught the owlet in a fall! My heart would have been pounding just watching it. I saw one of our baby squirrels fall out of the tree and it was hard to watch. But the little guy shook it off and climbed back up the tree. How fun to watch the cycle of life!

Oh..look how sweet and happy he looks. So good to hear a happy ending to this story!!

Wow, what a drama! A wonderful story :-) And fabulous photos!

dear Carola-thanks for sharing the Owl Family story with us...those pics are sooooo adorable! I know-what pain with Blogger being down most of last week!
I hope you received my e-mail about Etsy-any help you need, just let me know. I am still learning BTW and...I have not had time to add prints to my store. It takes so long with pics/write ups etc but...once it's done...it's done!
Oh! totally understand what you mean about meditation-it's difficult to just sit there and...empty your mind!!!

Oh, the photo of the owlet falling just made my heart stop! I do hope his mother is feeding him by now.
Beautiful photos, and such an engrossing story.
— K

Carola- I just love reading about the owls. It's amazing that you were able to photograph them and track their journey in the redwood tree. Thanks for sharing this with us!

Wow - you really put me on edge with that story! They look so fluffy and precious. I do hope they all survive in the end as it's a hard life out there these days!