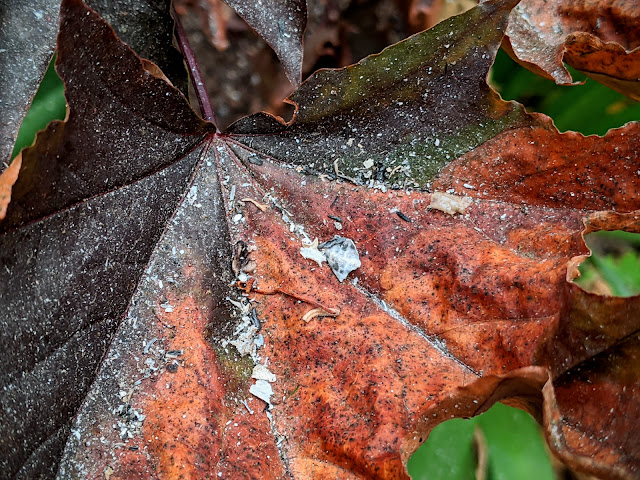 Are you getting tired of my posts about wildfires and bad air?

But here I am writing yet another post about a raging wildfire in our county - the second one this season - and bad air. Well, that's an understatement. It's downright unhealthy air, in some places even hazardous. 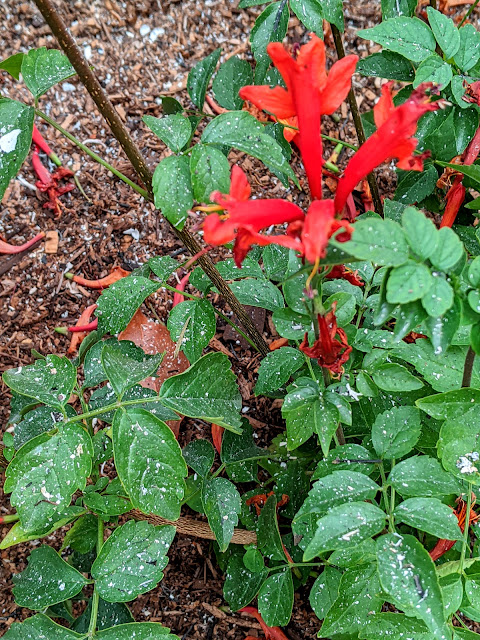 Last Sunday evening at 8:27 our cell phones suddenly started to vibrate and make annoyingly loud dingdingdings alerting us about the Shady Fire making progress from Napa Valley where it originated over the mountains into Sonoma County toward the Eastern boundary of Santa Rosa. It soon merged with the Glass Fire that had also started in Napa and both fires were quickly renamed to just Glass Fire.

What worried me were the words "fast moving". Since 2017 we are well aware what "fast moving" means when it is attributed to a wildfire.

We also live in the Eastern part of Santa Rosa. 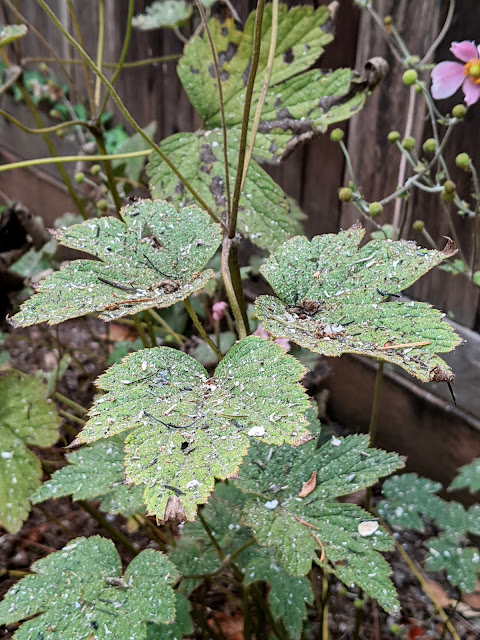 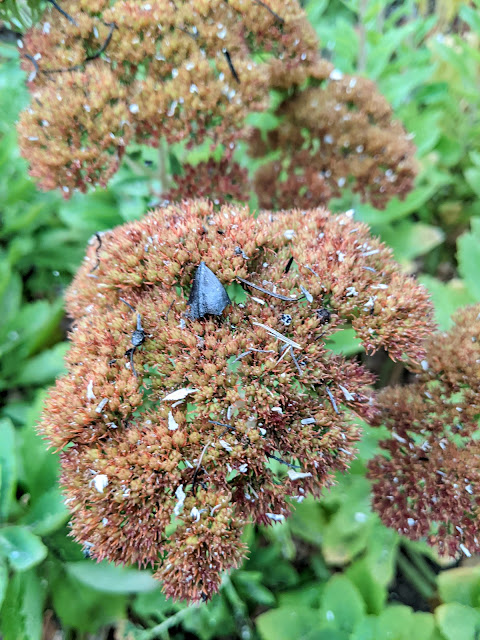 I got dressed and went outside, checked in on my elderly neighbors to make sure they were ready (they were). There was an orange glow on the Eastern horizon, a sky I only know too well and remember from the October 2017 fires. The constant high pitch sound of sirens was loud and clear and there were more cars than usual driving through our neighborhood at this time of night - people evacuating. It was enough to set me on edge.
I packed everything in the car and then went back to bed in my clothes. The evacuation orders went on throughout the night, but thankfully we never got one. The fire burned through some neighborhoods in the East while destroying several homes and damaging more. It's the district of my high school and again many of our students' families had to leave and some of them lost their homes. 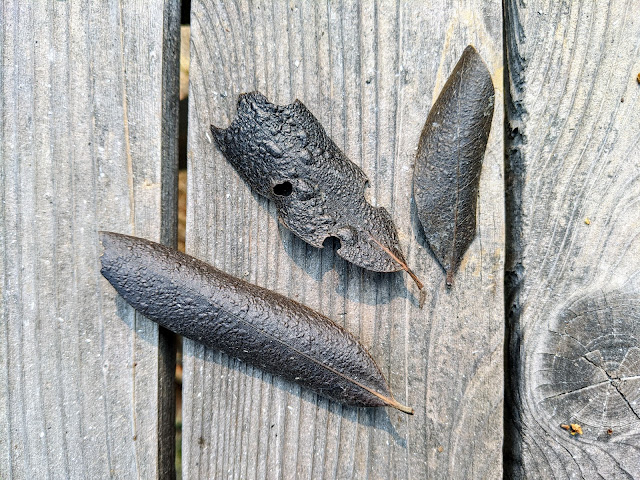 This is not new to us. But it never becomes routine.
The next day ashes were raining down and covering everything. When I ventured outside - with my N95 mask - I saw that we not only got ashes but also all kinds of burnt debris including a lot of  charred leaves. Everything in our garden was covered in ashes - the tables, the seat cushions, all the plants. 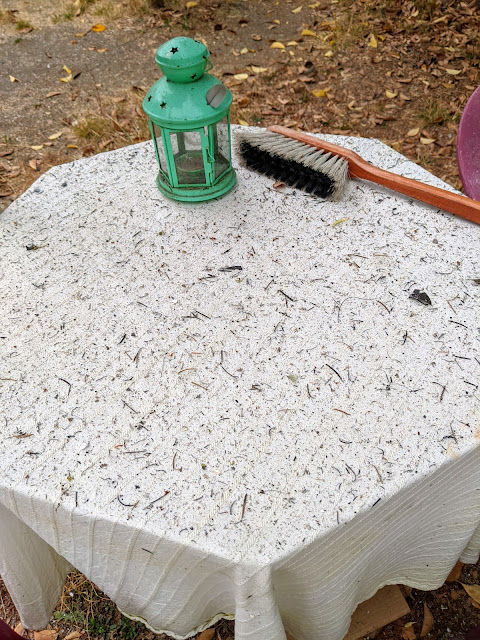 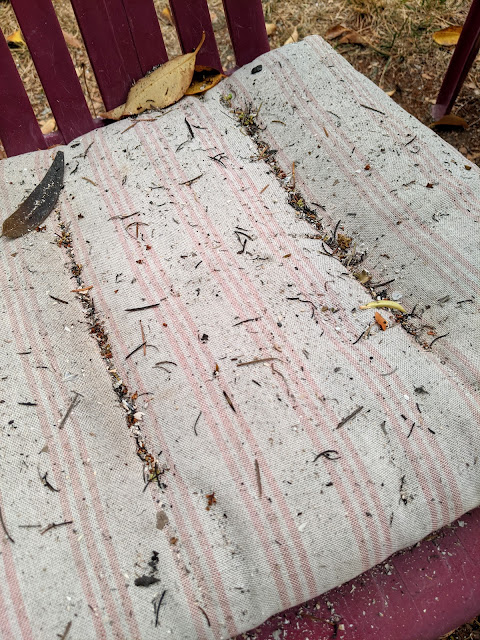 How do you clean up this stuff? Very very carefully.
Now, five days later, the fires are hardly contained, but many evacuation orders have been downgraded. There was a change in the wind a couple days ago which pushed the fire further into Napa County. The entire city of Calistoga had to evacuate, followed by the evacuation of Angwin. The fire has been contained only 6% or so. We have a red flag warning with high temperatures and high winds which makes the work for the firefighters much more difficult and dangerous. 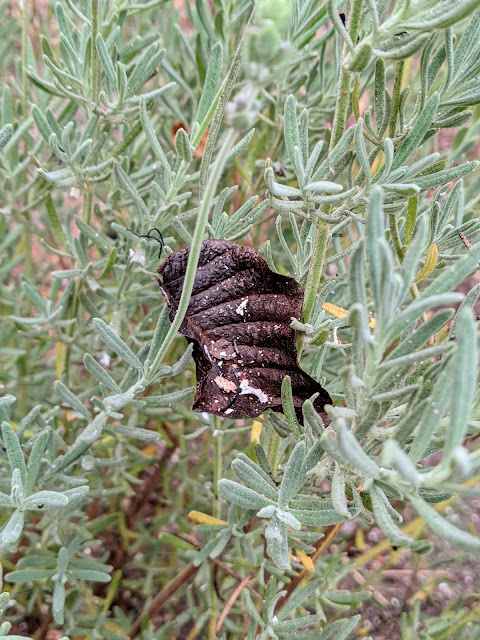 Then the wind changed again and blasted unhealthy air to us. It is awful. Our air filters run day and night and the Geek built a couple more out of our fans and filters for the heater. He's a smart and handy guy. Let's hope the power doesn't get shut off!
And in case you were wondering - I still love living here. 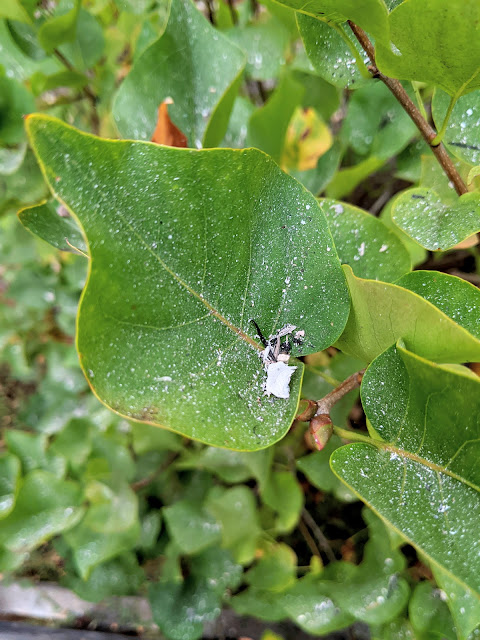 My heart breaks for you and for every living thing in the affected areas.
It is sadly only too familiar - and you never, ever get used to it. I fear our summer will be stuck on repeat.
Stay safe and if you can keep us posted. Please.

My heart is breaking for this state and this country. How much more?

Your last sentence answered my question before I asked it! Based on climate projections this is going to become the normal state of affairs each year, probably intensifying and increasing in area, so you know that next year you will be dealing with the same issues all over again. And don't forget "the big one" is also in the cards. Earthquakes and fires sounds like a great mix, Oh, and there is COVID too. To each her own I suppose, but I think I would be high-tailing it back to Germany in a hurry! Stay well and stay safe

This has been such a terrible year for fires, we had a bad time a few weeks ago but not nearly as bad or as frequently as you have had. It's hard to think of what the future will bring what with climate change. Good luck!

I am so sorry you are having to go through this. Though, I am glad you are safe.

This is absolutely terrifying. I am so grateful you are prepared and safe but wow -- it scares the heck out of me. Please take care.

To answer your question, Carola, no I do not get "tired" of your posts about the CA fire dangers. It is very wise of you and your neighbors to be so prepared, but also very frightening and nerve-wracking as well. I am glad that you and others did not have to evacuate this time, hopefully the ash can be safely cleared.

Your story is heart-breaking -- having such a beautiful place destroyed so quickly and totally. I've visited your area over the years and it's always seemed so idyllic, this news is terrifying.

Thank you for allowing us to hear what you are going through. I wish you good luck and a speedy return to normal as much as possible.

I am watching 60 Minutes now with the lead story being about climate change and the fires in the west and the storms in the east. We have been told about this for decades but few are listening. I understand why you love California as my daughter and her family live there and we visit there yearly. If is beautiful and I do love the culture. She had her bags packed and was ready to evacuate (did not know where to) but thankfully, did not have to leave. I worry everyday, and although I have made “suggestions” of moving to another state, she, like you, loves where she lives and will probably never leave.

I hope things get better for you and for all your neighbors.

Its hard all round at these times isn't it. So fraught with emotion on top of hard realities. When the wind changes it means trouble for others - I used to hate that thought whilst feeling some relief. So complex xx

OH that is so sad Carola :( I hope the rains will come soon and clean out not just the residues but also the air :)

We lived in San Marcos for 27 years and saw fires burning on the other side of the ridge. It was 20 miles from us, we watched the flames.

Darn scary. And David is right, This will become an every year disaster.

Oh, those are big ash droppings. So sorry you're going through this again, Carola. It was nice of you to check in on your elderly neighbors. I do hope things have gotten better since you wrote this post. I'm so sorry to hear about the families who lost their homes. These fires in California, what are we going to do?

Scary, scary, scary. Horrible. Hope it´s over soon and you all stay safe.

Heartbreaking for so many! Your photos bring it to home. We were paying close attention to the news, and have seen the devastation. It looked horrifying and very scary. We lived in California for several years and I remember one time a brush fire came as close as a quarter of a mile. In these latest fires a relative who lives in the San Francisco area had 14 friends who lost their homes. I am glad you are okay and checking on your neighbors shows you have a very caring heart. We all need to take care of each other don't we? Stay safe and well Carola, and I extend those wishes to everyone out there.

Hi Beautiful Soul! Thank you for coming by my blog! Please take care of you! I just can't imagine living through all of this! Thank you for all the photos!! Stay safe! Big Hugs!