Wildfire season is year-round in California by now, but fall seems to be the most dangerous time when after the summer everything is bone dry, humidity is low and the winds pick up. Great conditions for devastating fires like the ones we experienced in October 2017. However, those fires as well as the horrific Camp Fire last year in November were started by power lines that PG&E, our gas and electricity provider, neglected and failed to maintain over many years. As a consequence, PG&E now opts to shut off power to its customers as a preventative measure instead of putting those power cables underground (too expensive for those CEOs who love to line their own pockets).

Last week on Wednesday - ironically exactly the second anniversary of the October fires - our power was shut off early in the morning at 3:00 am. In the days before when we had been warned about this intentional power outage the Geek and I prepared for the days without electricity - the car had a full gas tank (gas stations were shut down as well and I had no desire to get stranded in case we had to evacuate because of fire), we had filled up the freezer with gallons of water that froze and provided some extra cold, cooked some food in advance that could stay fresh safely in a barely cool fridge and had enough back-up power to charge our cell phones and flashlights.

Many schools were closed including the high school where I work as well as the Geek's company. We spent Wednesday mainly reading, knitting (I, not the Geek), walking, chatting and taking naps. In the evening out came the camp stove and we cooked simple meals, accompanied by delicious wine. 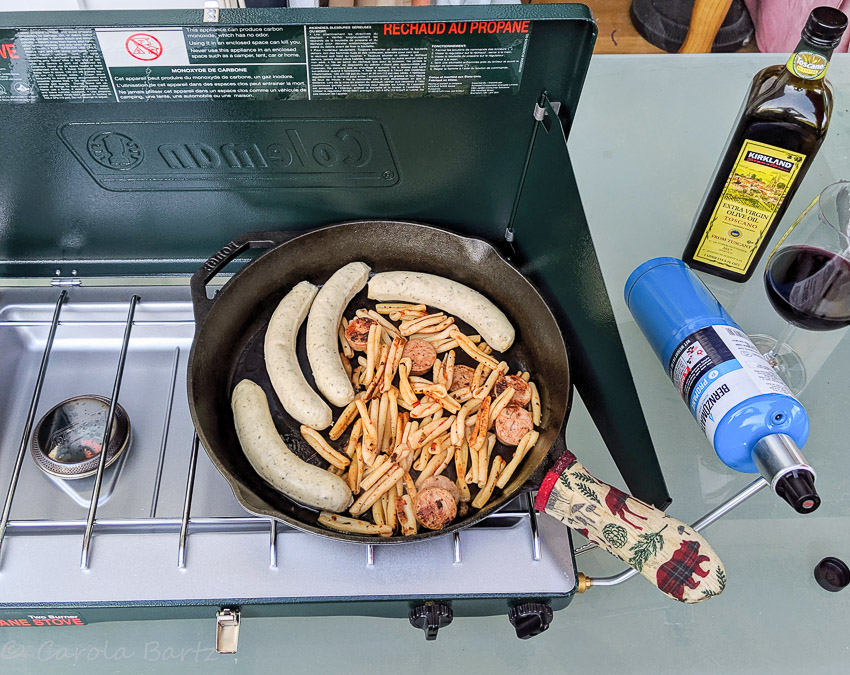 Thankfully the weather was still warm, gorgeous fall days - but we were wondering about the wind. There wasn't any. But the wind was the reason the power was shut off...

Unfortunately it wasn't quiet. Some of our neighbors had turned on their generators, and our next door neighbor who had the loudest of them all let it run throughout the night. How annoying! We had to sleep with our windows closed which I hate and we could still hear it. No wonder I didn't sleep very well that night, even though it was pitch dark. Instead I lay in my bed wondering how I could have hot coffee in the morning. You see, I only have whole coffee beans, but my grinder is electric. Totally useless! But then it dawned on me - I still have my mom's old-fashioned hand cranked coffee grinder! I also have an old hand filter that I found the next morning at the very back in one of my kitchen cabinets. I could make coffee! 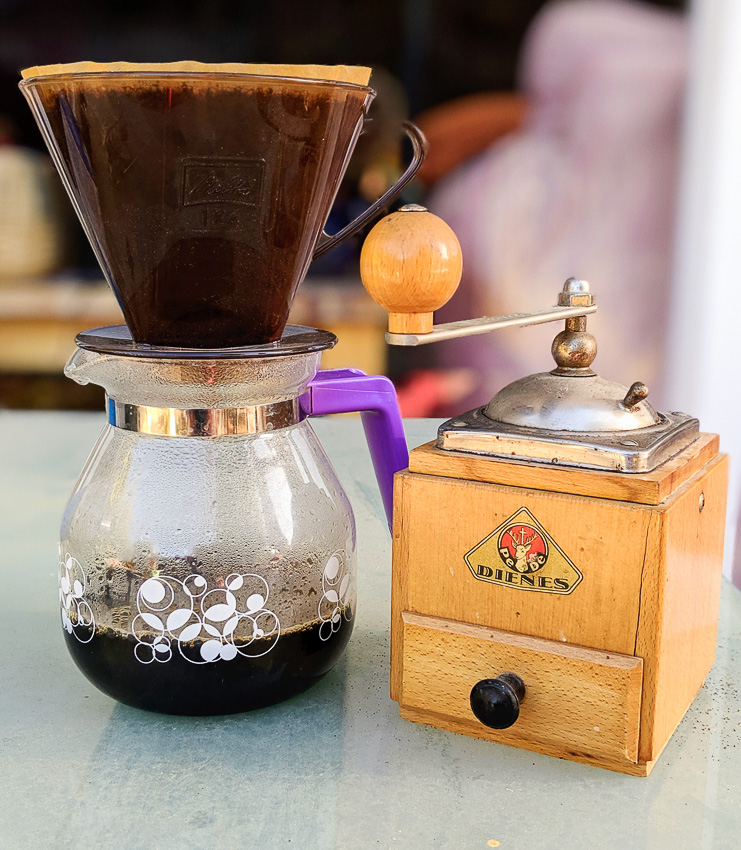 It was the most delicious coffee I had in a long time.

After two days we got our electricity back. Many people were mad at PG&E, complaining on "Nextdoor" and just whining. I can understand that a power outage is awful when you need electricity for your health or have small children or your own well (I'm not talking about businesses here, only residences); mostly it is an inconvenience because we are so used to have electricity to ease our daily tasks. No Internet, no TV and only spotty cell phone service seem to be quite horrible for many people. I wonder how long we would last if there was a more permanent power outage, for example after an earthquake? All the whining wouldn't help. Being prepared, however, gives us a fighting chance. 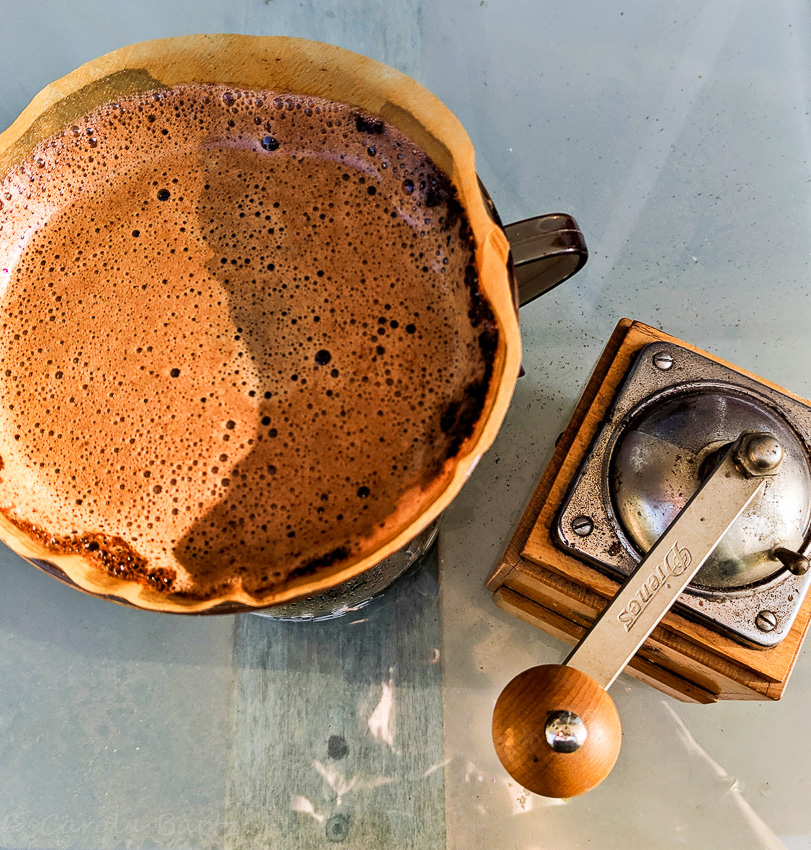 Being prepared is so often the solution.
Loved your dinner and good wine - and am quite sure that coffee was DELICIOUS.

Bravo, Carola, for making these advance preparations. I am sure that the degree of whining by others is directly proportional to the lack of preparedness. This may be the way of the future so perhaps people should start to take advance planning seriously. I remember a few years ago our daughter was without power for about three days and she told the kids they would be camping indoors, and by the time it was all over I think they were almost sorry to see the lights come back on!

It sounds as though you prepared well. I can understand your frustration with the electric company, it does seem as though CEOs continue to receive huge compensation packages even when their companies aren’t doing as well as they should. It’s too bad your neighbor ran the generator all night - how annoying! I would probably most miss my hair dryer - my hair doesn’t air dry well (lol)

As long as they give you notice -- and they did, so you could prepare -- then it's a good idea. A very good one. I feel for those who must rely on electricity for medical equipment but apart from that, everyone needs to suck it up and do what they can to prevent another disaster. Apart from the generator noise (I hate that) one could even make it kind of fun.

Oh Yes, I got the message that there would be a power outage, but thankfully my area wasn't affected. You really came prepared, Carola, for the outage. Oh my gosh, you are the first person I've seen to make coffee like this with the single filter. I make it like this every day, and it's the best. Your old-fashioned cranked coffee maker came in handy, and do you know those are really IN right now? I bought Brian one for camping last year. We can be creative and very smart when we have to, and it looks like you did just that, Carola, when you had this power outage. Your coffee looks so good, and I bet it tasted good too, especially when dealing with the little annoyances from the neighbors. ; )

Totally agree about being prepared and getting that morning coffee would have been top in my mind ... glad you guys were smart and got through it all.

We all take so much for granted … you prepared well.

I'm not a big coffee drinker (preferring tea) but your coffee looks and sounds so good!

Good for you, being prepared! It's all so scary, to me! The longest we were without power, was a week, due to an ice storm. Your coffee looks so good! Big Hugs!