A few weeks ago I told you about an evening at Pepperwood Preserve, a nature preserve in our area. Since we are members of the preserve we are sometimes invited to special members-only events that can be talks, art gallery openings or hikes. The talks are always very interesting and every time I go away with something new I have learned.

Pepperwood burned during the October fires which motivated the staff (wonderful people, by the way) to held a series of fire related events. Most of them were highly informative talks with footage from their wildlife cameras that survived the fire. This footage showed us the sheer power of this fire, how fast and furious it was. But it also showed that it didn't take that much time for life to come back. Within two days rabbits appeared on the camera, followed by deer, a bobcat, coyotes and finally a black bear. I don't recall seeing a cougar but I'm pretty sure they have returned as well. 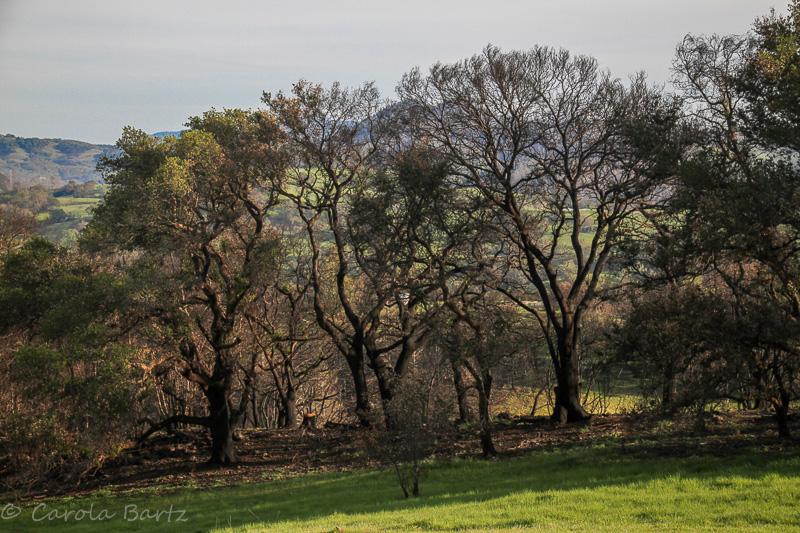 A few weeks ago we were invited to a sunset hike under the guidance of a Native American. Clint McKay is Wappo, Pomo and Wintun and Pepperwood's Cultural Consultant and Chair of the Native Advisory Council. He led us down the hill toward the charred trees in the photo above. 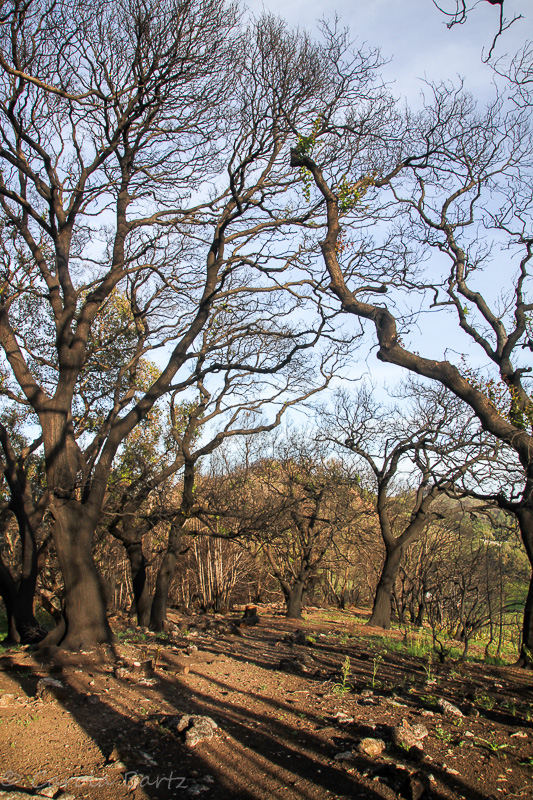 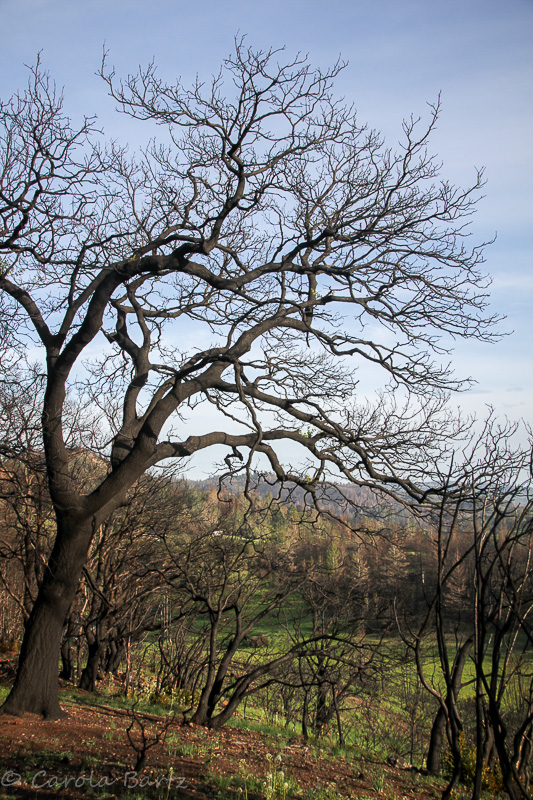 Everywhere we could see the scars of the fire. Black trunks, fallen trees, stumps of tree that had to be felled. The fallen trunks on the ground were interesting since we could clearly see where the fire did its damage. And it was also beautiful. 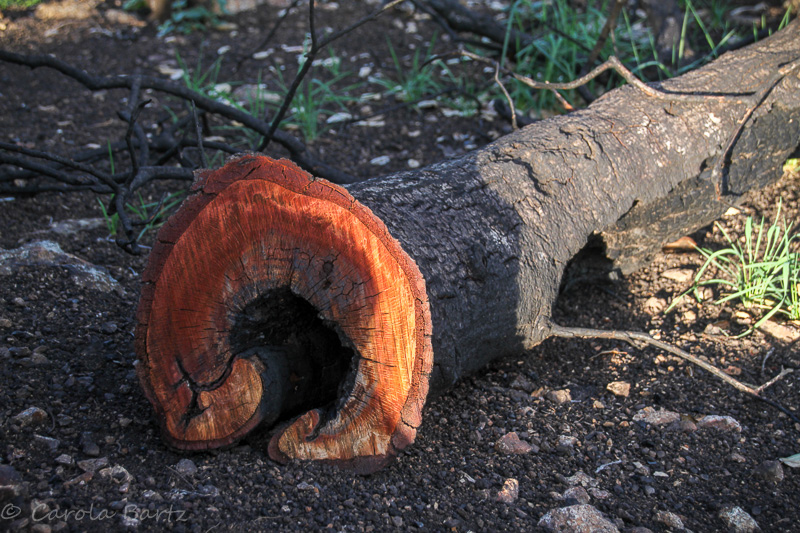 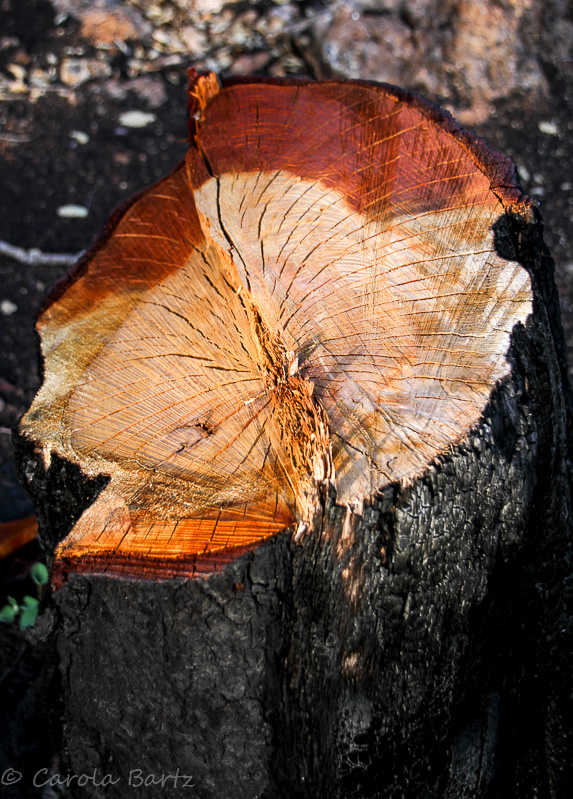 But among all the devastation there were new signs of life. New branches grew out of the charred soil, wildflowers reached for the light. It was undeniable that nature was bouncing back. 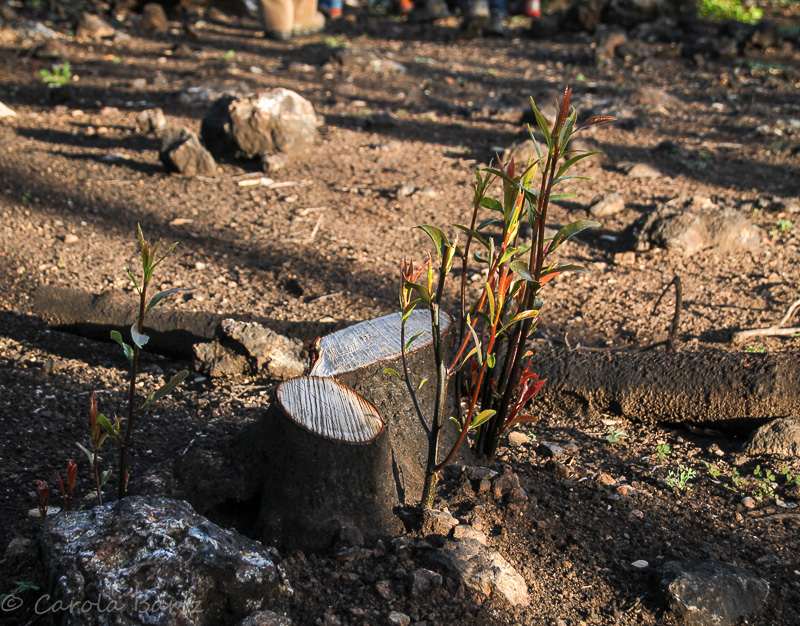 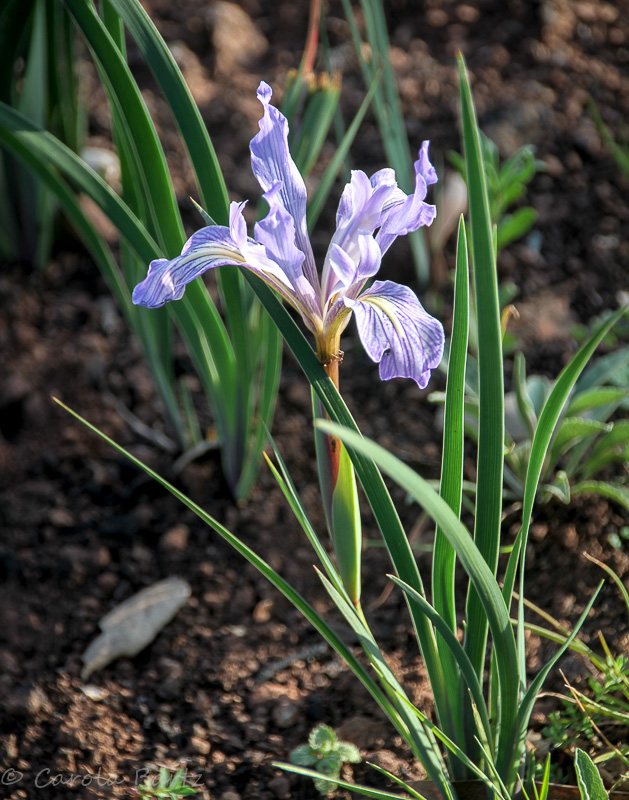 Then Clint started to talk. He asked us to think about the word "land management". What does management mean? If you're a manager, you're the boss and things have to be done your way, right?

Are we humans really manager of the land? Of nature?

Isn't it the other way round? Nature does whatever it wants and the only thing we can do is react. And prepare if we're smart.

Native Americans have had a different understanding of nature, the land and wildfires. They didn't manage the land, but they worked with nature. They cut away underbrush, started controlled burns and thus enabled nature to do its own thing. California has always had wildfires, it's a natural part of this landscape. Wildfires are important, and if people wouldn't interfere so much they wouldn't end in such a disaster like last October. 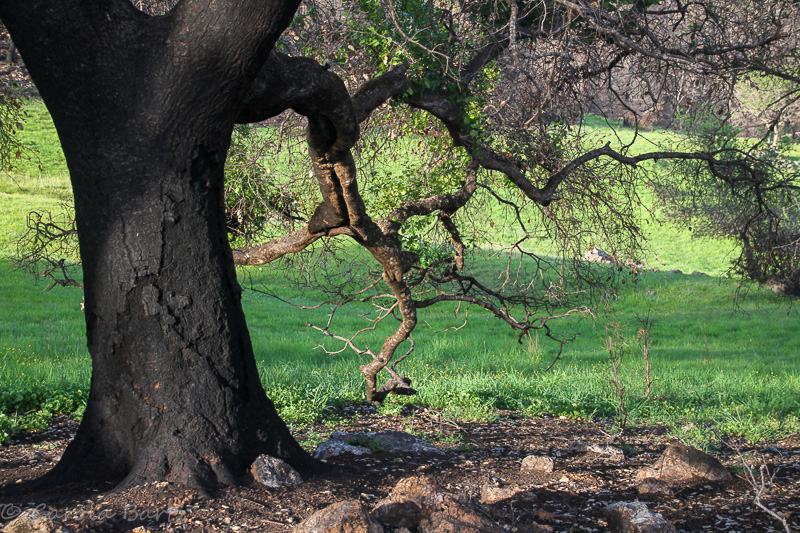 This was the moment when Clint had to fight his own emotion. 175 years back from now was the mid 19th century, a time when white people took over the land (stolen from the Native Americans, really) and Native Americans were forced back on small reservations. This is when the thoughtful work with the land ended... and we're seeing the devastating results now.

We certainly did here in Sonoma County.

Perhaps this is a bit too black and white, but I do think there is a lot of truth in this thought. And I don't want to judge here but keeping an open mind. This principle sure makes a lot of sense to me. 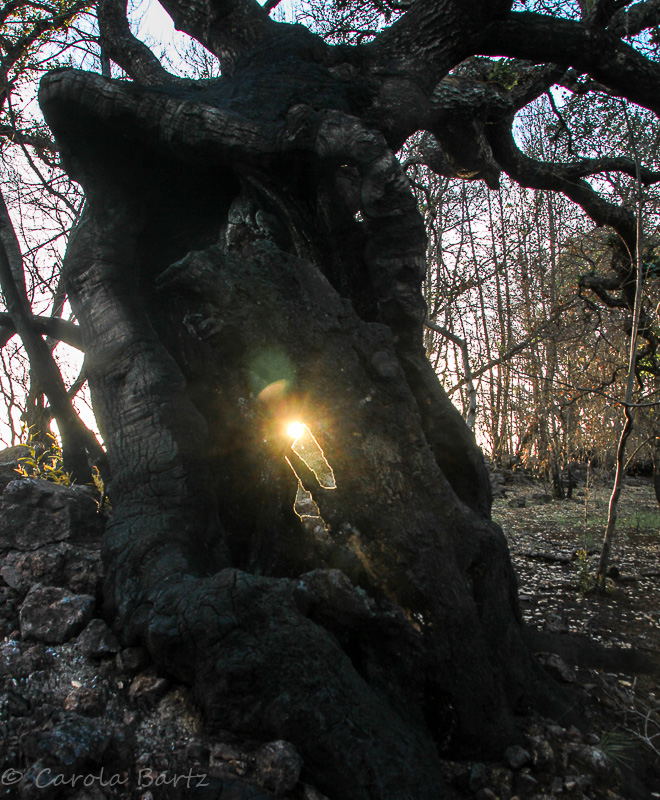 The sun was deep on the horizon when we had climbed back up the hill and the views were fantastic. Looking across Pepperwood to the next hill we could easily tell where the fire had raged. Just look at the trees and you can see without a doubt. 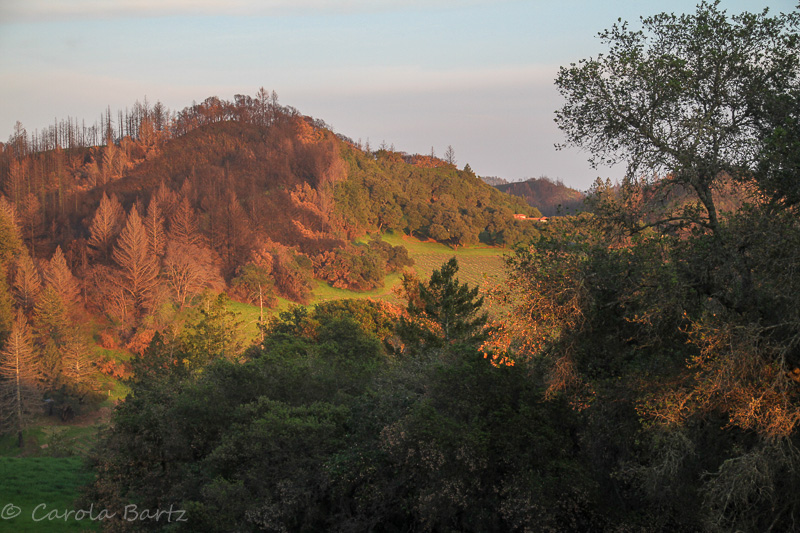 While this is a big fat scar that probably will be visible for some time we know that nature will recover from this, much faster than we do. I hope that we have learned something from these fires and do more to clear underbrush and have controlled fires. Those fires also help some long dormant seed pods to burst open and give us some stunning wildflowers. Just like we're experiencing right now. 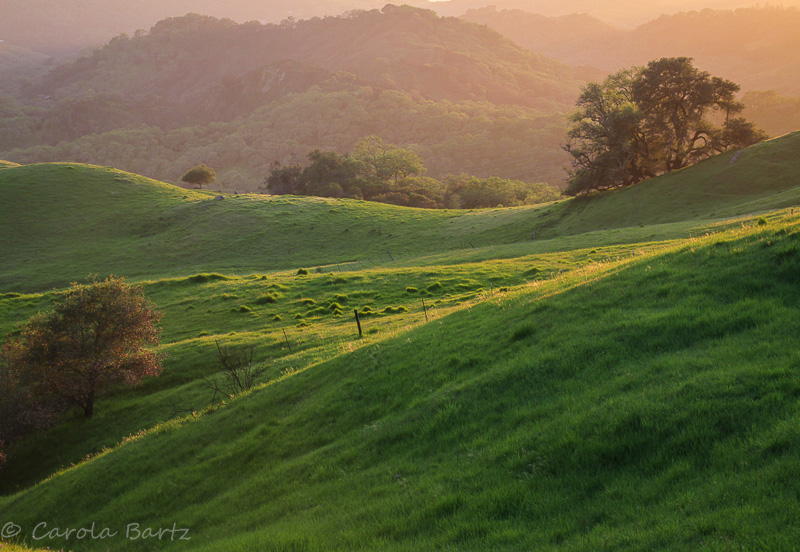 We gathered at the ridge to the west, enjoying the warm light of the slowly setting sun. At the request of his wife, Clint led us into a Native American prayer in the Wappo language (he also speaks some Pomo). Even though we didn't understand the words we felt the emotion. Then he and his wife turned around, facing the sun and started a Native chant. It was an easy tune, and we soon followed them chanting together while the color of the light became warmer. 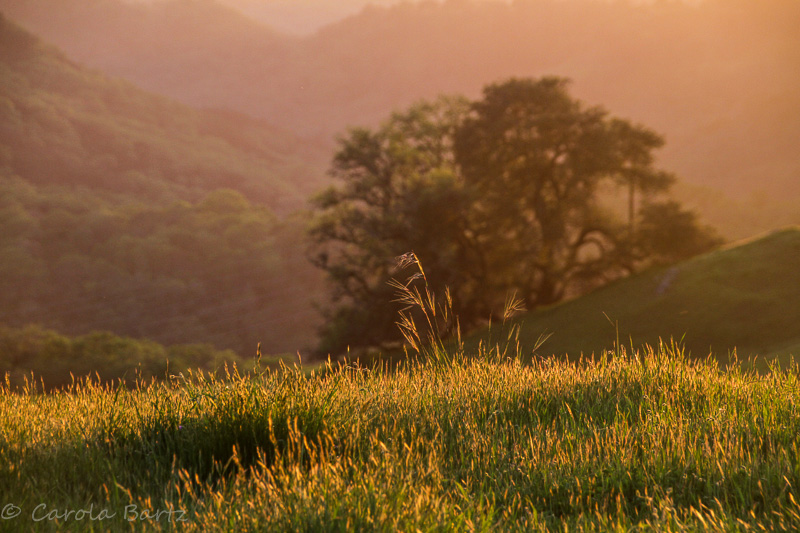 It was extremely moving. I had to fight back tears. 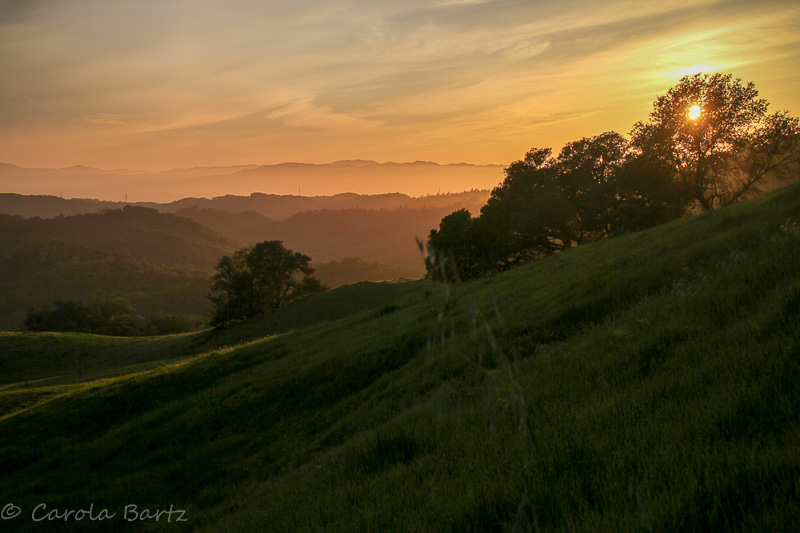 Almost everybody gathered at the Dwight Center for wine and chocolate afterwards, but the Geek and I spent a few more solitary minutes on the ridge before we joined the others. 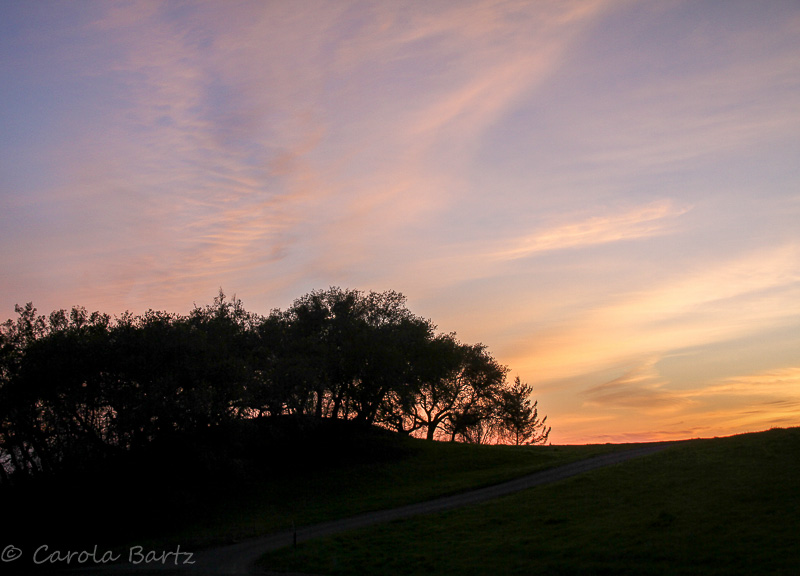 Did I mention there was wine? 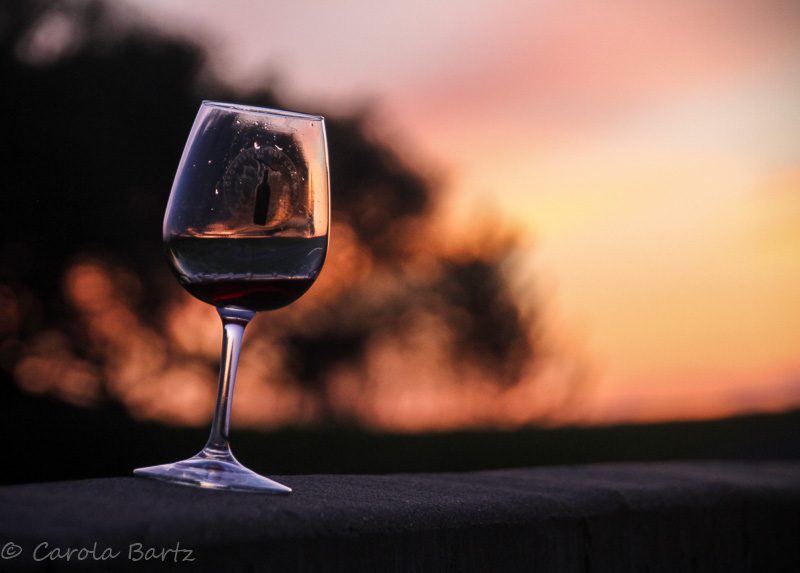 Just reading your post tears are prickling at my eyes. I am not at all surprised you were moved.
And envy you the opportunity.
That philosophy resonates strongly with me too.
Hugs.

Life holds tight and keeps trying. The renewal in our area from the December fires brings hope and heart. Lovely pictures Carola

A sunset hike, learning experience, and wine - a winning combination! This looks like a beautiful experience. It is wonderful to see the new shoots and wild flowers emerge from the devastation. Mother Nature will do what she can to regenerate the area - we humans, still have a bit to learn.

Oh Carola, this is both fascinating and heartbreaking. Your photos, of course, are beautiful, as is the narrative. That would be a talk that would be well worth hearing -- so informative. My heart aches for the loss of your natural habitat during the fires. That one photo on the ridge near the end with the stratafied (sp) layers in the background in the sunset -- wow. And your wine glass. Also wow. I think I might well have been moved and wanted some alone time, too.

What a lovely and evocative post. Nature continues to surprise with the main intent to be beautiful. It is inspiring to see the first struggles of life after this devastating fire.

I just read your previous post as well. I didn't realize that you were in the midst of that hellacious fire. I'm sure that words cannot describe how hard it was and is.

I loved the messages in your post. After I read it, I went back and simply looked at your photos. They are stunning! Wow. The beauty shines through loud and clear.

your post really stings my eyes! what are we doing with our mother nature??

A very moving post! That philosophy resonates strongly with me too! Thank you for the gorgeous pictures! Big Hugs!

Beautiful pictures, Carola. Even the fallen trunks on the ground are beautiful. It looks like a peaceful place, and nature will rebuild itself after the fires. I love that picture of the old twisted tree. And wine and chocolate at the end of an emotional day is always nice. : )

Wow... this is so heavy and heartbreaking, yet so beautiful, and miraculous! The will to survive is amazing--even in nature! I like the Native American approach to living with and understanding nature--to work with nature, rather than man trying to control it all the time. Dazzling photos, Carola! :)

A Cuban In London said...

Life sprouts even in the most difficult of conditions. Great post, although sad. Thanks.

Such a beautiful place. I am so glad to hear the critters came back so soon and there is evidence of growth in the forest. I think we all need to listen and learn from the Native Americans. Thanks so much for sharing this with us.