'Āina a ke akua i noho ai... Land Where the Goddess Dwells (The Volcano Part 1) 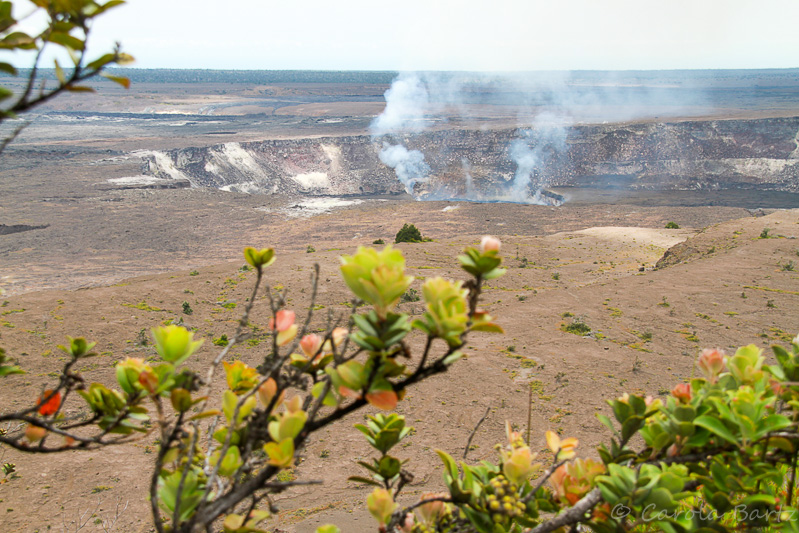 'Āina a ke akua i noho ai - these words are the title of the pamphlet you receive when you visit Hawai'i Volcanoes National Park on the Big Island, home to two of the world's most active volcanoes, Kīlauea and Mauna Loa. Both volcanoes still add land to the Island of Hawai'i, and according to recent rumours I have heard there are attempts that this new land shall not be considered American soil. I thought this highly interesting.

Let me quote the introducing paragraph from the National Park's pamphlet:
"Volcanoes are monuments to Earth's origin, evidence that primordial forces are still at work. Volcanic eruptions remind us that our planet is ever-changing, with its basic processes beyond human control. As much as we have altered Earth's face to suit our needs, we can only stand in awe before the power of an eruption."

In awe... it's not only eruption, but the entire volcano by itself. Visiting Kīlauea with its active crater, its lava flow and fumes, the lava tunnels and ancient petroglyphs kept me constantly in awe. When I hear someone mentioning "Hawai'i" I automatically think "Kīlauea". 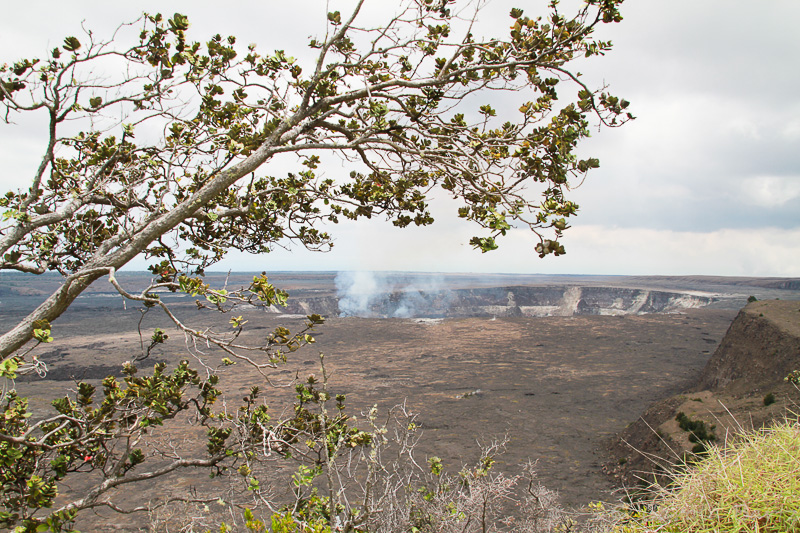 Kīlauea - often called the "drive-in volcano because it is so user friendly - is right on the flanks of Mauna Loa and is not visible from anywhere on the island. You constantly wonder where that mountain is, even when you're right there. When you get up the mountain and enter the National Park the first thing you see is the huge caldera at an altitude of 4000 feet. You can see it in the image above, and this is not even half of it. The crater is Halema'uma'u Crater, actually a crater within a crater (Kīlauea Crater). This is the home of Pele, the Hawai'ian volcano goddess. The crater is steaming and has a lava lake that has risen and fallen over time. 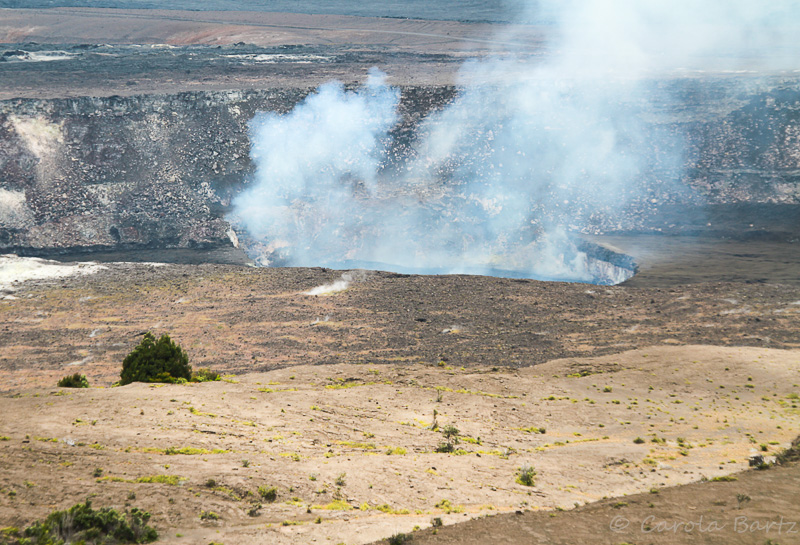 One of the best views of the crater you have from the Jagger Museum, and that is as close as you get (the photo above was taken with a zoom lens). The road beyond is closed and it is no longer possible to take the Crater Rim Drive because of the nasty gases Halema'uma'u started spewing in 2008.

When you look toward the crater you will notice that the caldera is very much alive. Do you see the bits of steam coming out of the ground in the picture below? It's hot there! 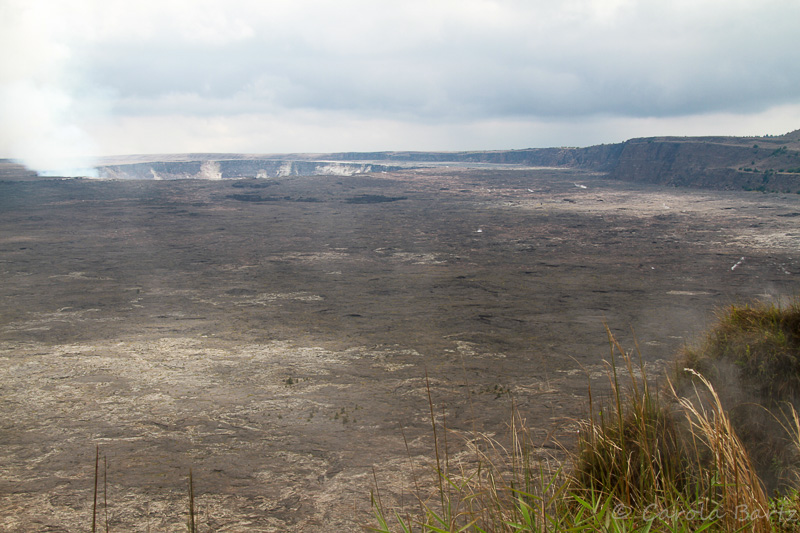 Just along the Crater Rim Trail you can get close to the Steam Vents - only a fence will prevent you from getting too close. It is fascinating to look in there and feel the heat that is coming out of Earth. 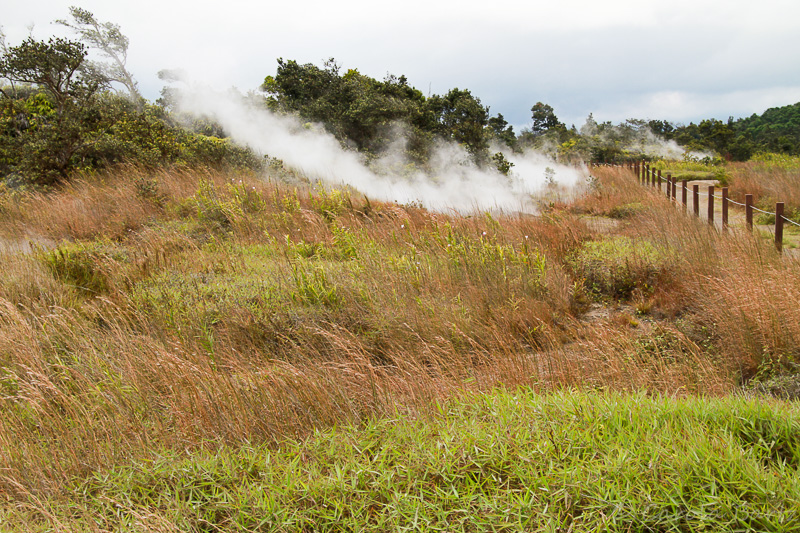 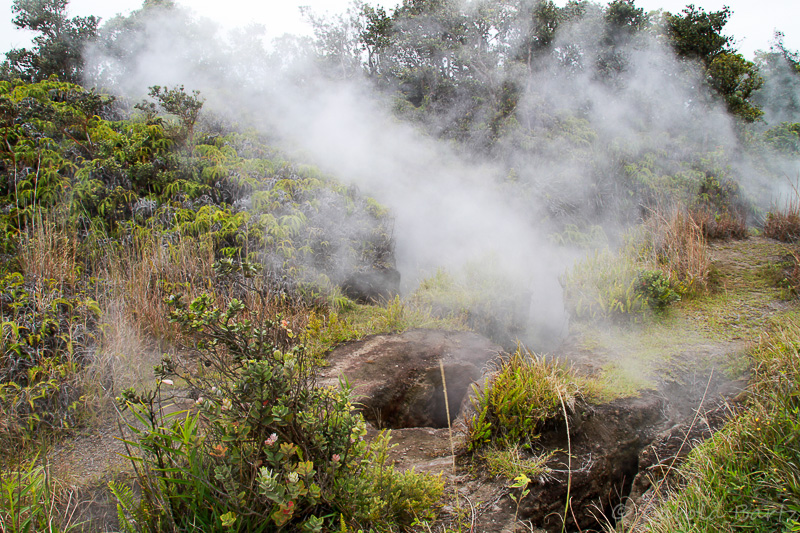 The entire region was shrouded in steam, giving it a misty look - it was magical and mysterious. It was nature at work, the ground you were standing on boiling in its depth - fascinating. 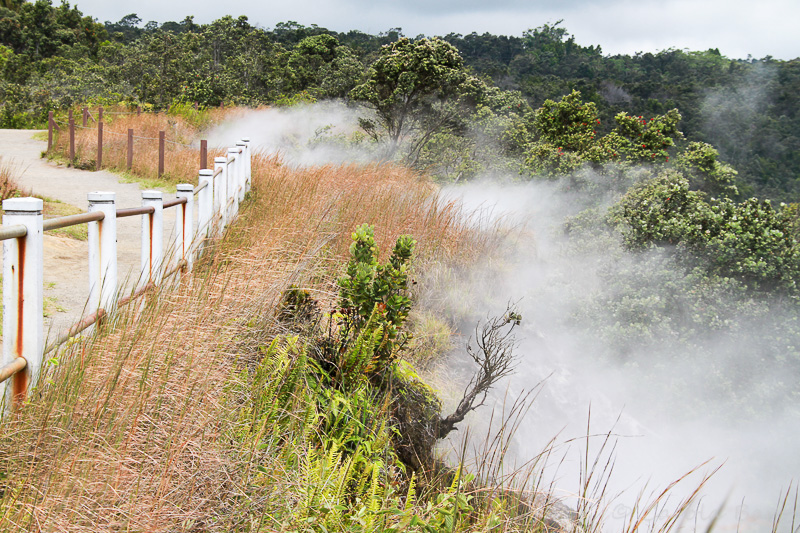 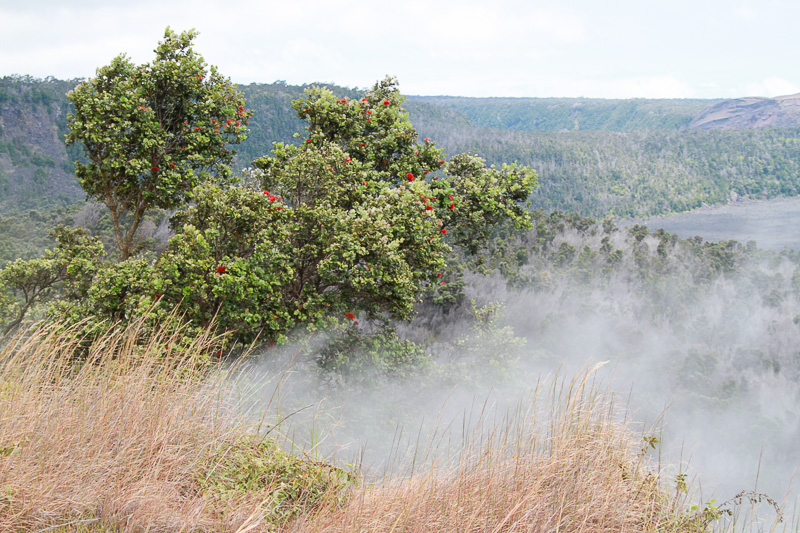 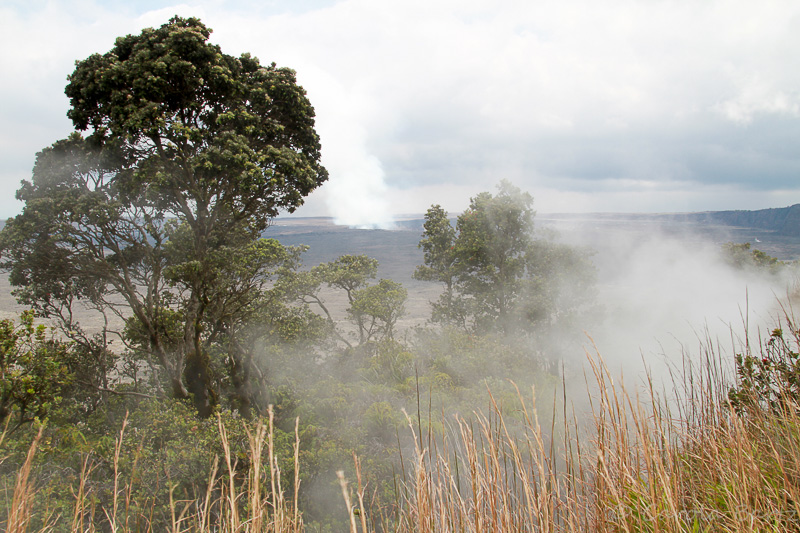 The National Park is open all day and all night. On the second night we drove to the overlook at Jaggar Museum again and saw the magical glow of the lava lake - I can't even put in words how fascinating this was. What did the pamphlet say about awe? 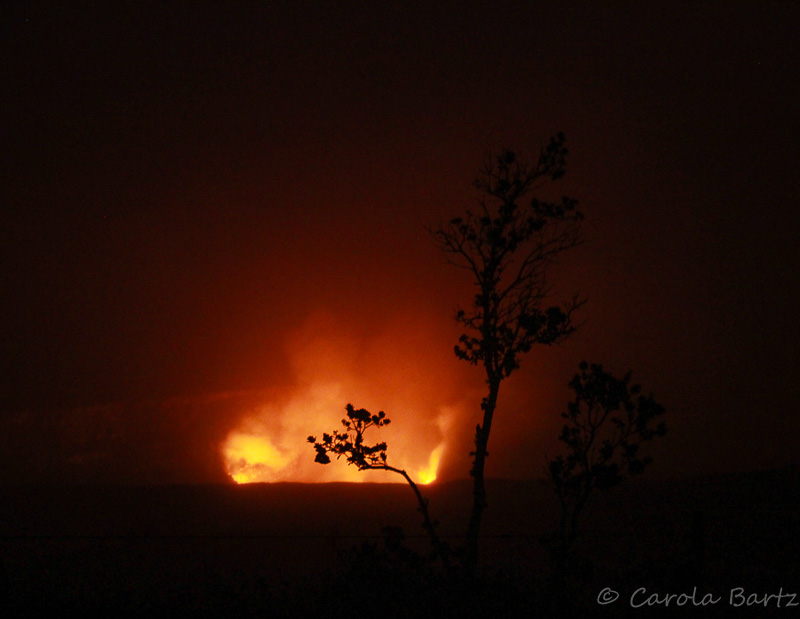 It was cold, it was raining, but nothing could persuade me to leave this sight after only a few minutes. This was too good to be true. It was a full moon as well, and this was the first time in my life that I saw a moonbow. I tried to take a picture of it - well, that didn't work. 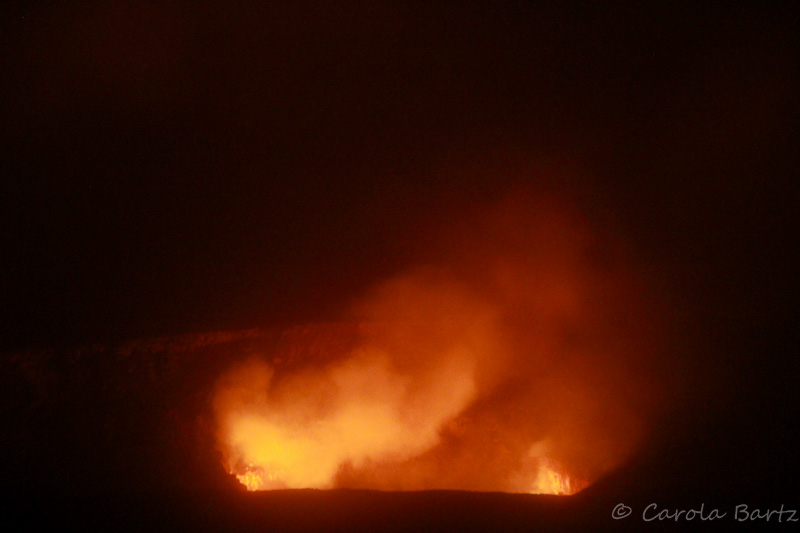 But I was able to include the fence at the rim of the caldera - and will link to Theresa's Good Fences! 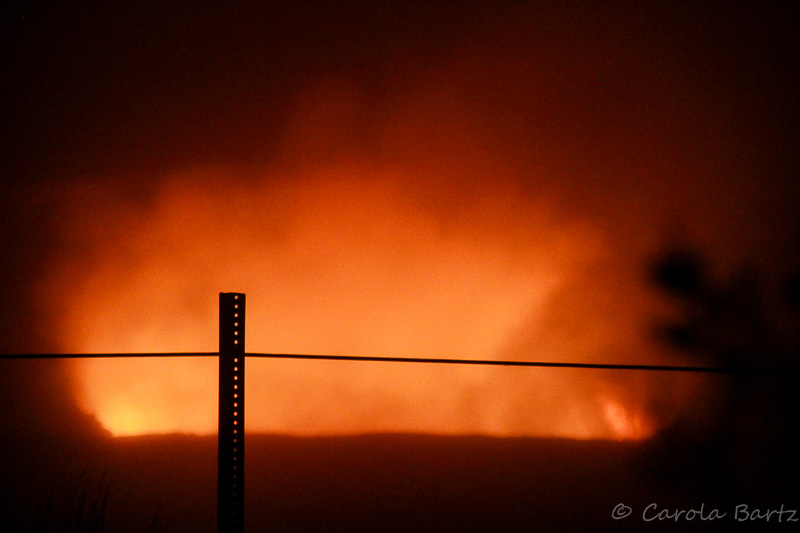 Recently Madame Pele has raised her head again - or, to be more accurate, she raised the lava lake in Halema'uma'u. Early in September the lava lake rose and started to splash and slosh inside the crater. You can see a video of it here - it's fascinating! The Pu'u' Ō'ō vents are very active as well, and the lava flow from there has reached the ocean. Madame Pele certainly wants to make a statement again - beyond human control, and we can only stand in awe!

I think awe and wonder are entirely appropriate ways to view our world. And would certainly have been awestruck to see this with you.
Thank you. And Madame Pele.

It's amazing to think how active these volcanoes are. Very dramatic and a little bit scary :-) Cheers - Ellen

I can understand why you'd want to visit both in the daytime and at night. An amazing sight either way! The video was fascinating. It's hard for the mind to comprehend boiling, liquid rock.

All very creative photos ~ hard to choose a favorite ~ lovely post for fences!

I visited The Big Island 28 years ago and stayed at the Volcano House in the park. What an experience! In February I'll be back in Maui. Lovely post.

Hello there! Love your site, and this post is amazing. I've never been there so I loved seeing the photos. Amazing photos!
Have a great Thursday!
Toni

wow, talk about awesome. I have never seen a volcano and I am not sure I would walk along that path by the steam puffs, beautiful but scary to me.. and talk about awe inspiring, that tree against the red volcano and sky is awesome!!! beautiful shots

Thanks for sharing these amazing photos! They really do convey the vastness and amazing power of these volcanoes! I really love the glow at night!

This is a fascinating post -- your photos are magnificent. What a steaming site. And the night -- wow. I learned a lot here. Thanks.

Wow! Amazing shots here. I loved them all. That last one was super cool.

Wow, I am in awww!!! Gorgeous photos!! Amazing site!

I enjoyed these photos immensely, along with your narrative. We were there years ago and I remember being in awe. I hope we get back there one day. Did you get to see the Fern Forest? I loved walking through it and remember our guide was highly knowledgeable. So many reasons to go back, one day I hope. Super shots, those nighttime ones were fantastic, but so were your others.

it is really neat, but rather eerie, too. sort of unsettling to think a volcano is under your feet. :)

Hello!:) All your shots are awesome, and what an amazing sight this is. The Lava glow images with the tree and fence silhouettes are beautiful.

I've never been so thank you for such a wonderful tour and sharing your beautiful photos!

Fascinating and also scary. It's good to show respect to Nature's power.

These are fabulous and breathtaking photos Carola! Our daughter and her husband went there on their honeymoon. It really is amazing and I'd love to see it. Thanks for sharing.