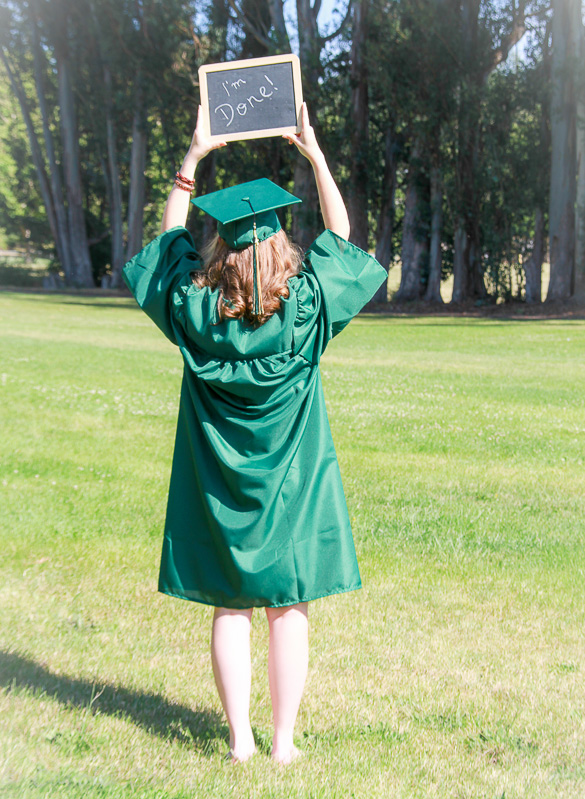 Last Friday, on the hottest day in the week, our daughter graduated from High School. The commencement ceremony was at 5:30 in the afternoon. Thankfully for everybody who attended, especially the graduates who had to sit in the sun in their hot gowns with absolutely no shade (at least they had bottles of water under their seats), the ceremony only lasted for 75 minutes with short but very good speeches from the graduates, the principal and the superintendent.

The school symphonic and concert bands played "Pomp and Circumstance" when the graduates marched in on the field. 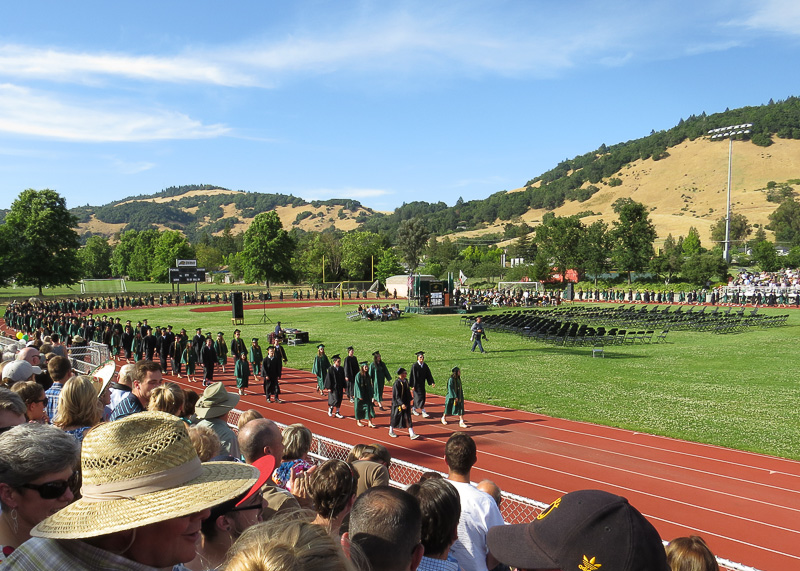 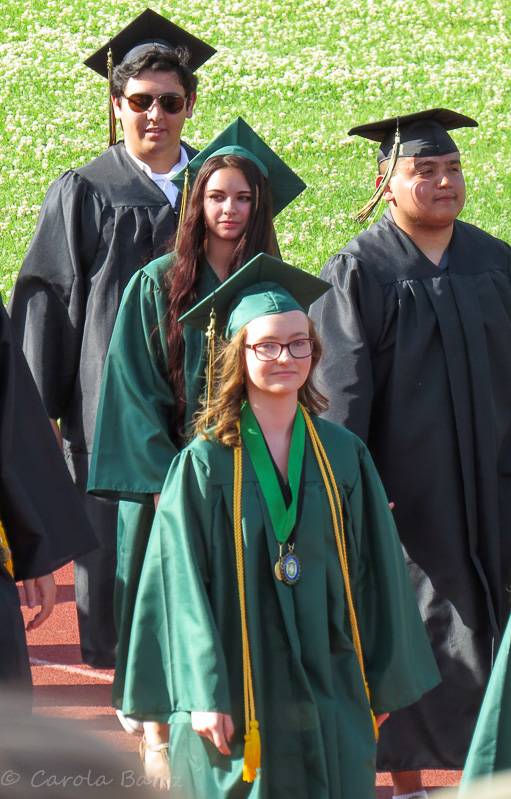 The Jazz Choir sang several times that evening - this was the last time for the graduates who were members of this excellent, award winning school choir. 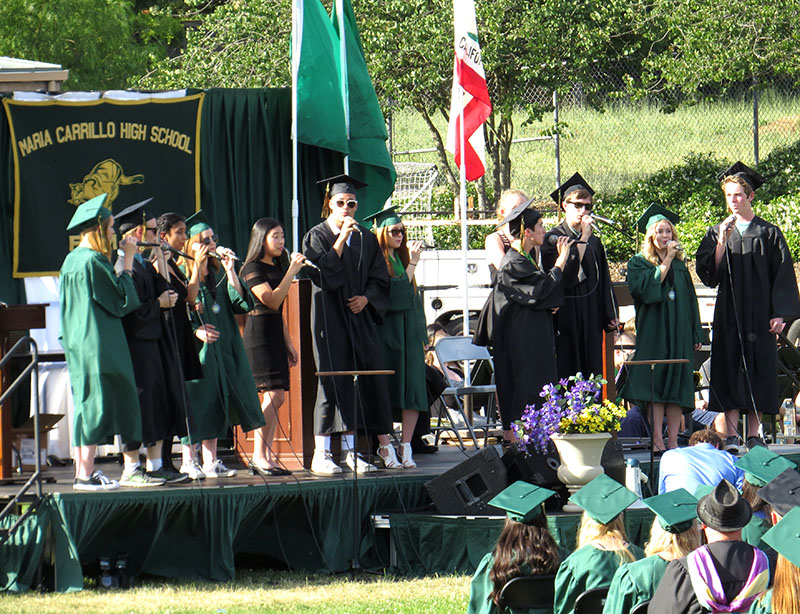 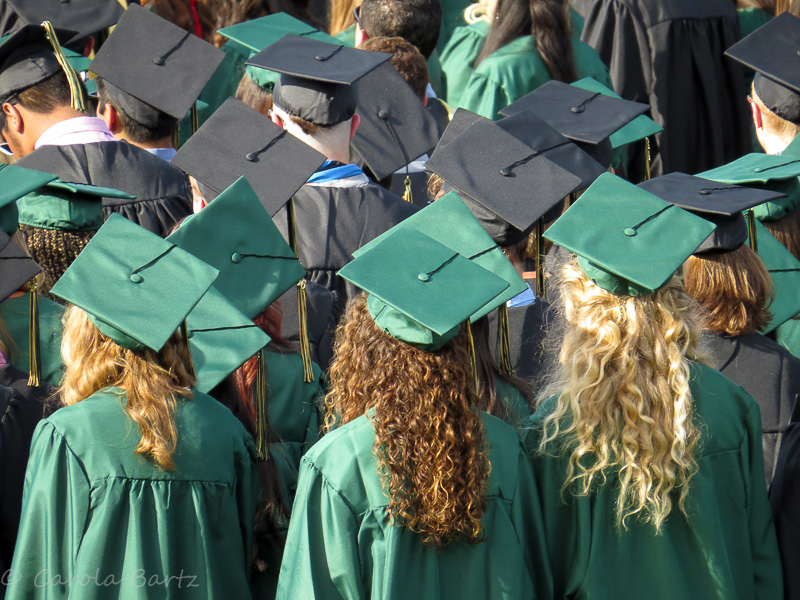 Every graduate - more than 400, the biggest class the school had so far - had his or her special moment when s/he was called on the stage. It definitely was very special for the attending families. 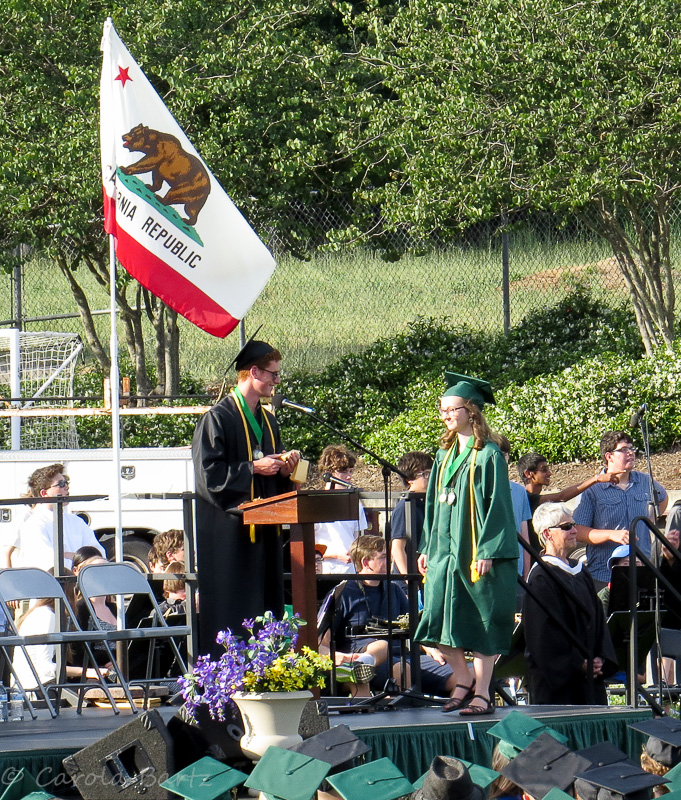 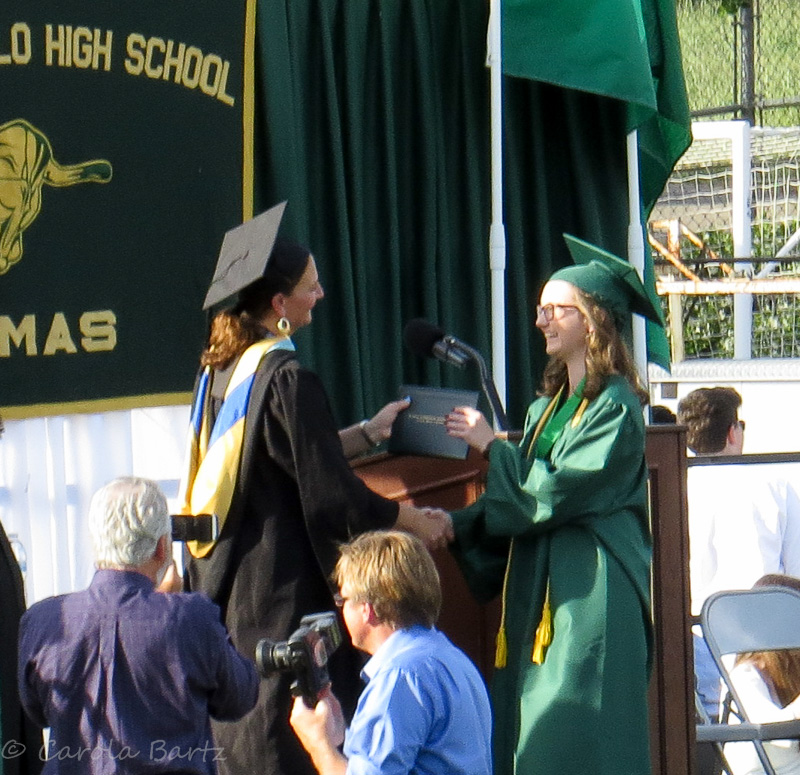 After the crossing of the tassel which represents the transition from being a student to being a graduate, the students - sorry, the graduates! - tossed their caps in the air. 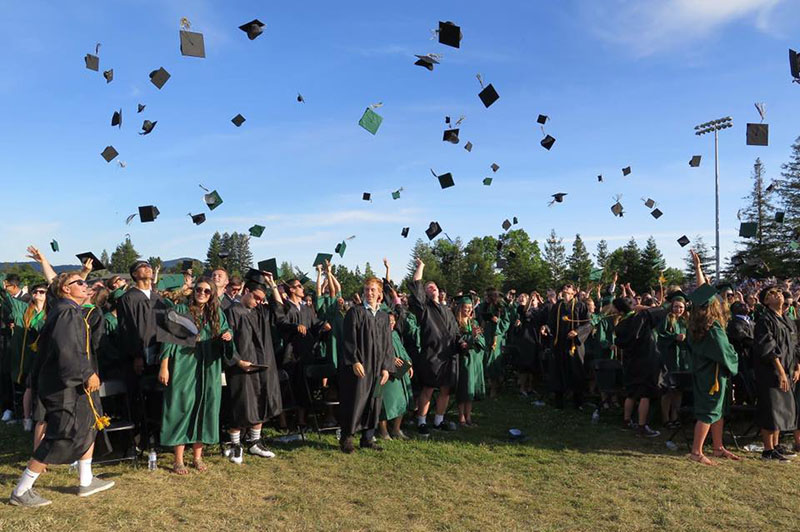 That was the end of the official ceremony. After that it was photo time!! 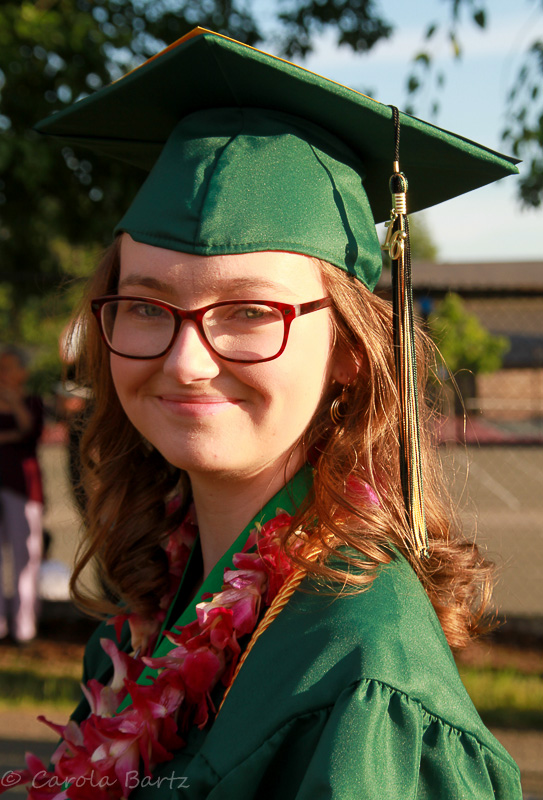 The proud graduate and her friends (and her calculus teacher). 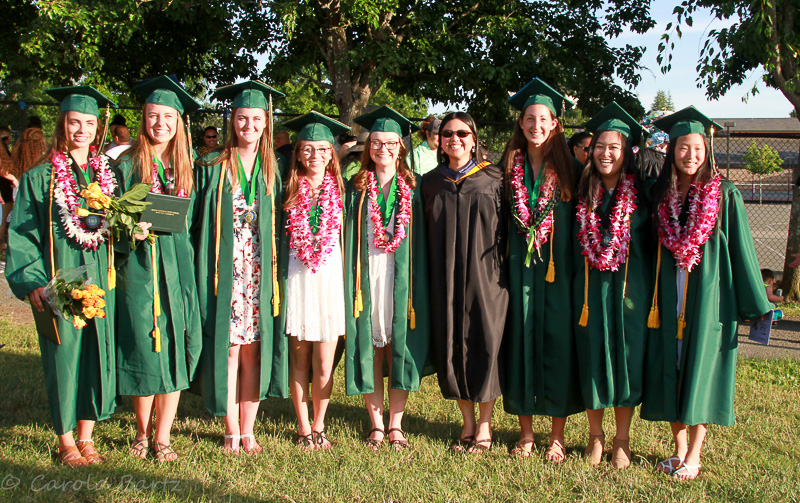 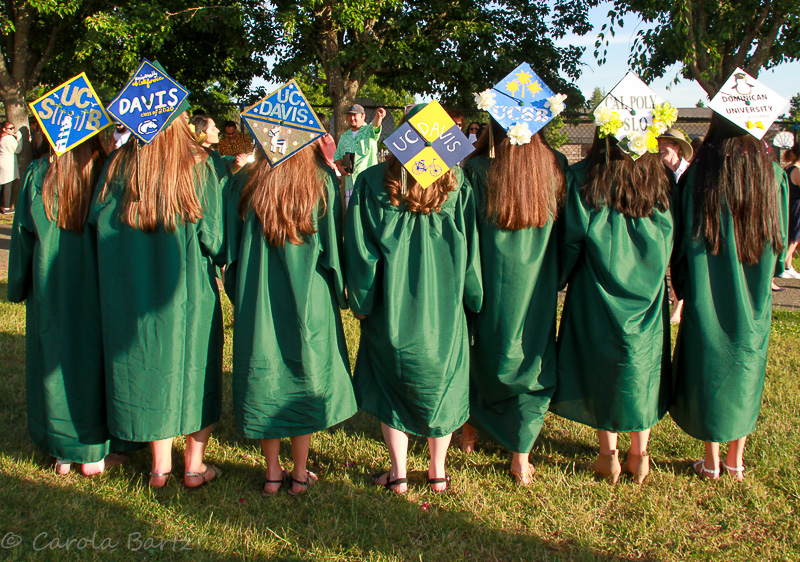 They weren't allowed to decorate their cap before the ceremony, but afterwards nothing could hold them back! They loved to show the college they would go to. 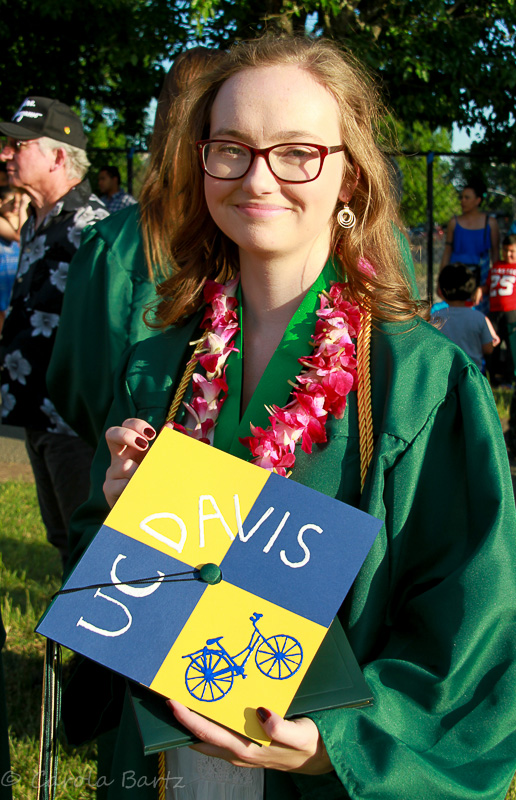 And her parents? They were proud as well - even though this milestone is bittersweet at the same time. However, there were no tears - but a lot of happy smiles. 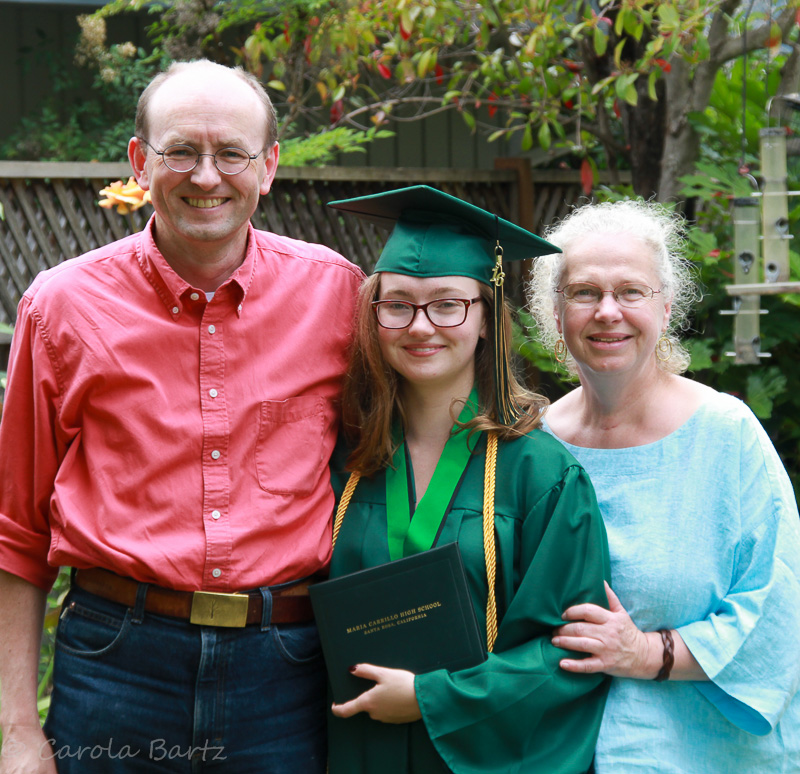 A couple days before graduation, when the 'kids' brought home their cap and gown, Kaefer and I took the opportunity to take some cap and gown photos. 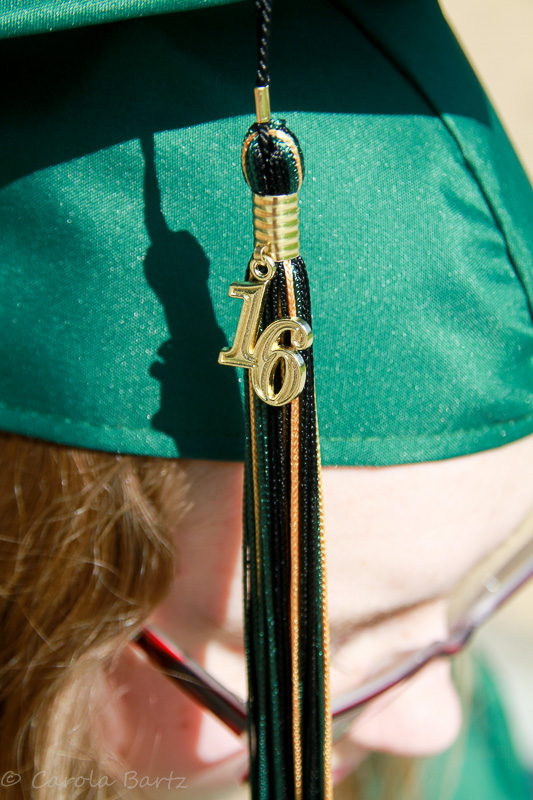 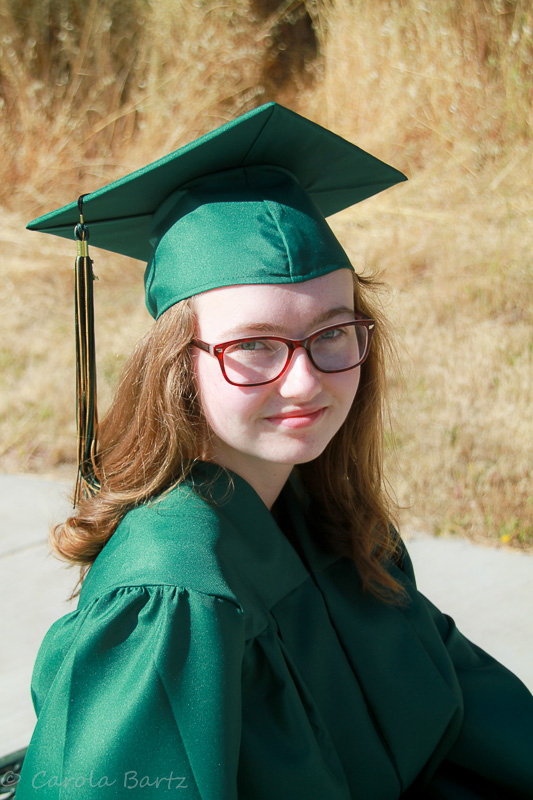 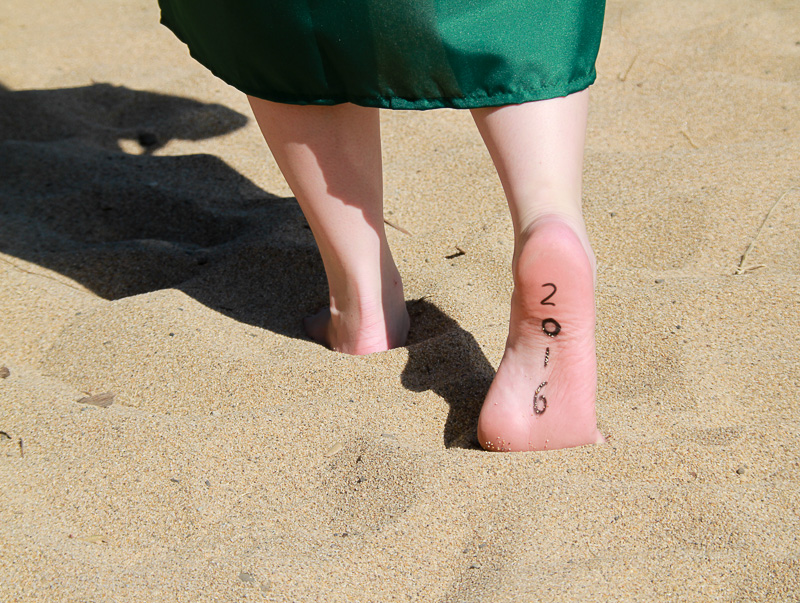 But graduate or not - the goofiness is still there, the soul of a child wants to play or at least swing and fly through the air - soar, my graduate!! 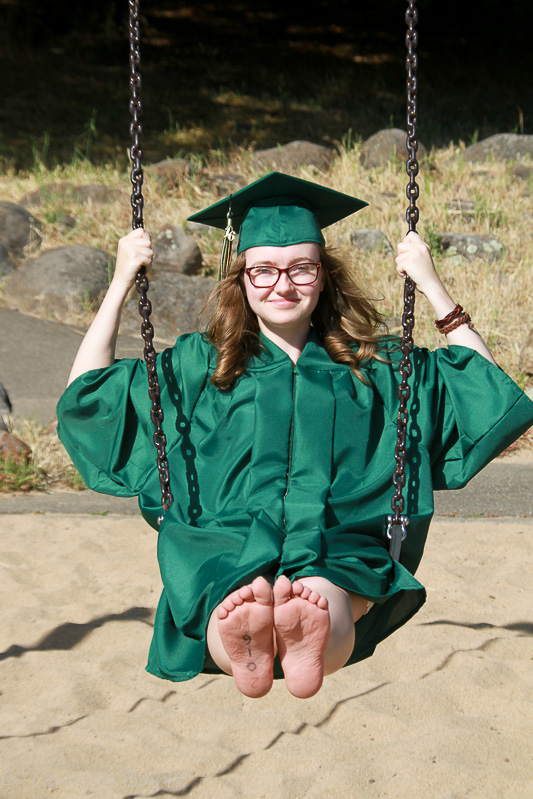 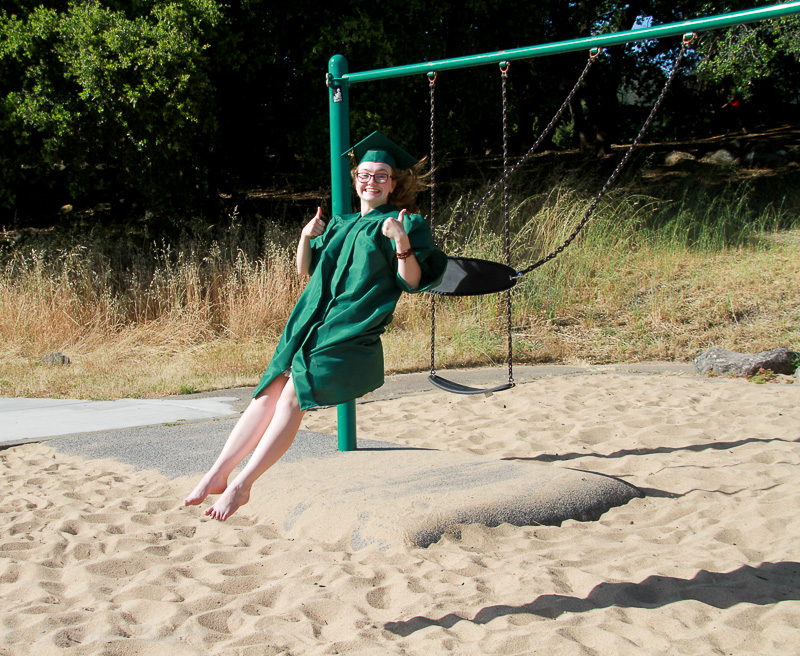 I do love this girl so much! 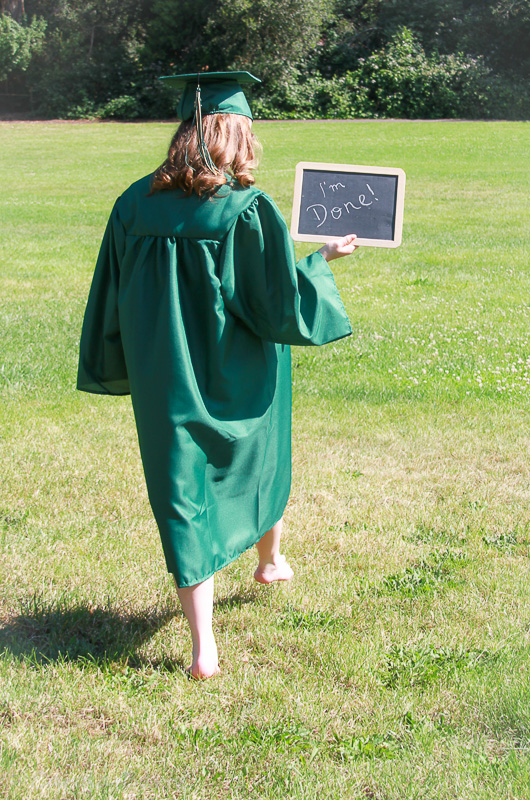 How absolutely lovely. Her proud parents may have controlled their tears but on this side of the world my eyes are misty.
Truly lovely.
And the goofiness is icing on the cake.

Congratulations, Kaefer! I know how proud you are, Carola. Such a wonderful milestone.

Congratulations and well done! I know an exciting future awaits your beautiful (inside and out) daughter.

Yeh!! I am so happy! What a great post! Congrats Kaefer! Truly loved all the pictures! Wishing you all the best Kaefer! Big Hugs!

This is such a wonderful photo essay of her graduation. A wonderful achievement and now off to college!!!

Congratulations all round. What a lovely daughter you have, her personality shines out of those fabulous photographs. Good luck to Kaefer for her future in uni and I know how you will miss her but be warned that she will be coming home as often as she can and will bring hungry friends to "eat you out of house and home"! (As we say in England.) I even remember friends of my daughters arriving alone to study at my house as they didn't have families of their own and they loved being part of ours! It was always open house and now I miss them even more.
Jo x

Congratulations to the graduate and her parents. This is a milestone and you captured it so well. Summer will pass quickly and she will be off on her next step in life.

such a cutie she is! congratulations to her - and to all of you. :)

Those were wonderful Graduation shots. I can't imagine sitting in the sun though for 75 minutes. You should be proud of her.

How wonderful! Loved all the photos and a hearty congratulations to you all.

Congrats to Kaefer! Given her long list of accomplishments, I'm sure her parents deserve some credit for doing a lot of right things in raising such a special young lady!

Hi Carola,
What a joyous moment for you all!
Great, happy ending to High School for your daughter.
How fun to have you as the photographer for your daughter's graduation!
And, how fun it is to have both your parents at the graduation party.
How much fun is knowing that you are going to UC Davis!
Wish you all a Very Happy Week ahead.
Great photos, as usual!
Peace :)