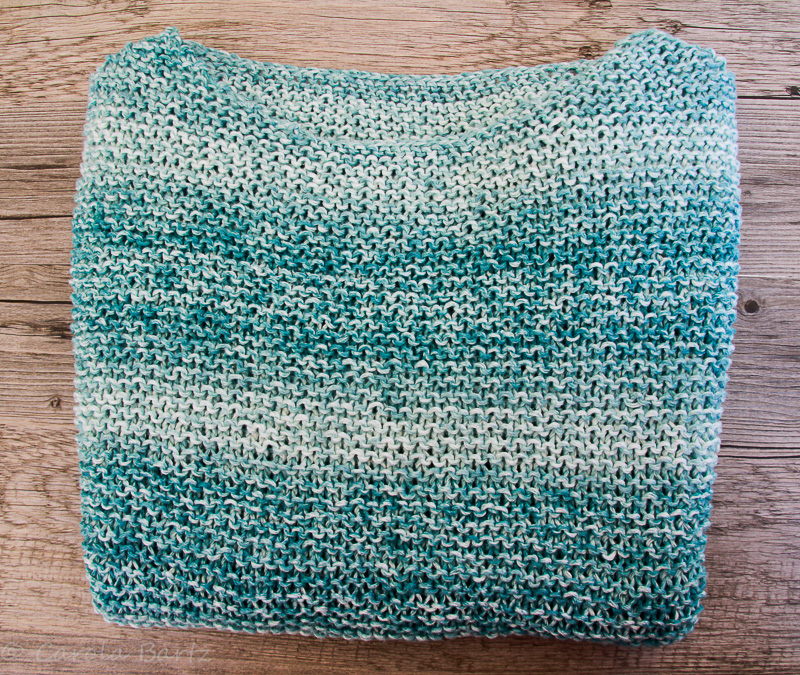 While browsing Pinterest for knitting patterns one day, I came across "Jessie's Girl" for a lovely, light weight sweater that would be perfect for summer. Kaefer liked it at once and after mentioning that I would love to knit it up for her, she told me I could choose the yarn and the colors. I went to my favorite yarn store and found a gorgeous 47% linen and 53% cotton blend called Good Earth Adorn in the color "Breeze" (304). The colors remind me of the ocean and I was certain that it would compliment Kaefer's complexion perfectly. 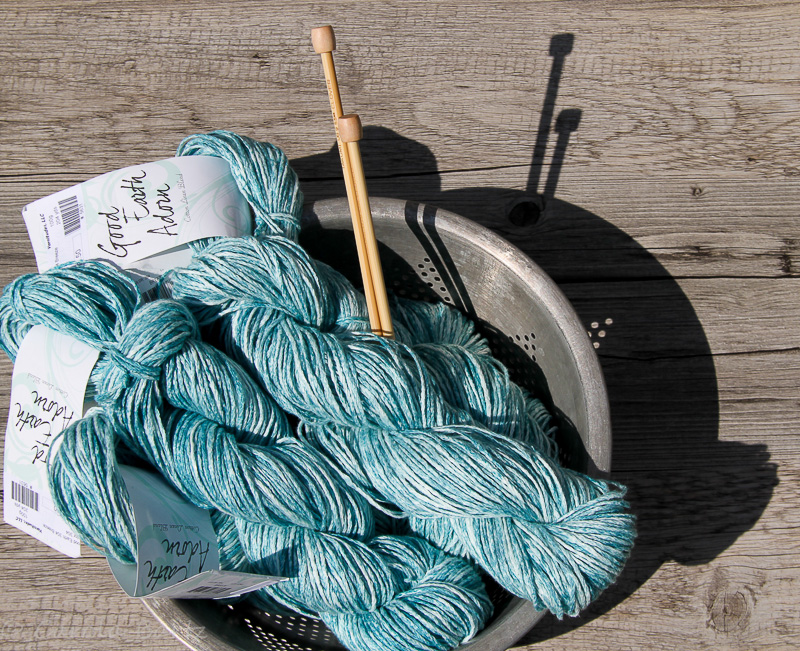 The pattern was easy and straight forward, and with my Knitter's Pride Dreamz wood needles (my favorite knitting needles) I happily knitted along. The sweater knitted up quickly and was no problem to create while watching movies and/or chatting with friends. It was done in no time at all. While knitting it I already thought that it was rather big. Just in case I didn't weave in the ends because I had that odd feeling that I might have to unravel it...

And indeed! When Kaefer tried it on, it was beautiful, but just too large for her small frame (I had followed the pattern for the smallest size to the T). My gauge was correct, I knew that from the swatch I made before starting out.

So I unraveled the entire sweater and started over again. 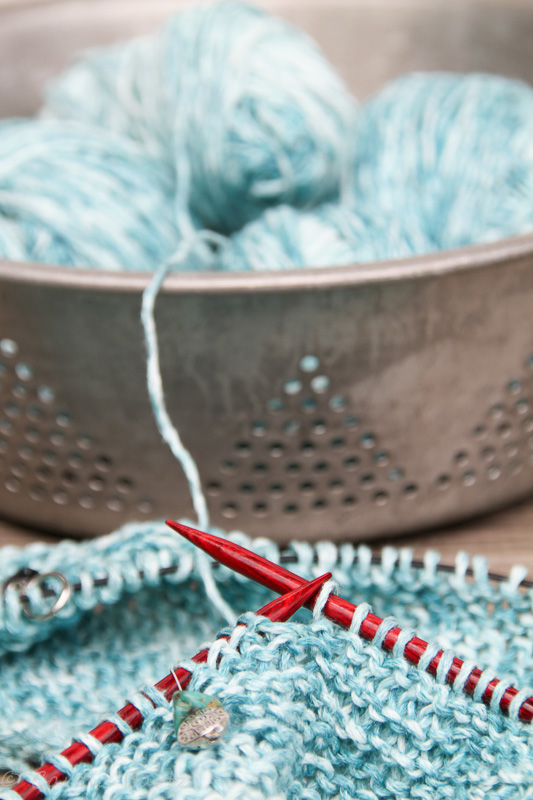 The sweater is intended to be oversize, so I had to keep that in mind when I counted out my new number of stitches and figured out the math how to do the neck opening. Since I had less stitches the second time around the sweater knitted up even faster, and I already knew where I had to pay special attention. Again, I didn't weave in any ends until I was sure that the sweater would fit Kaefer. 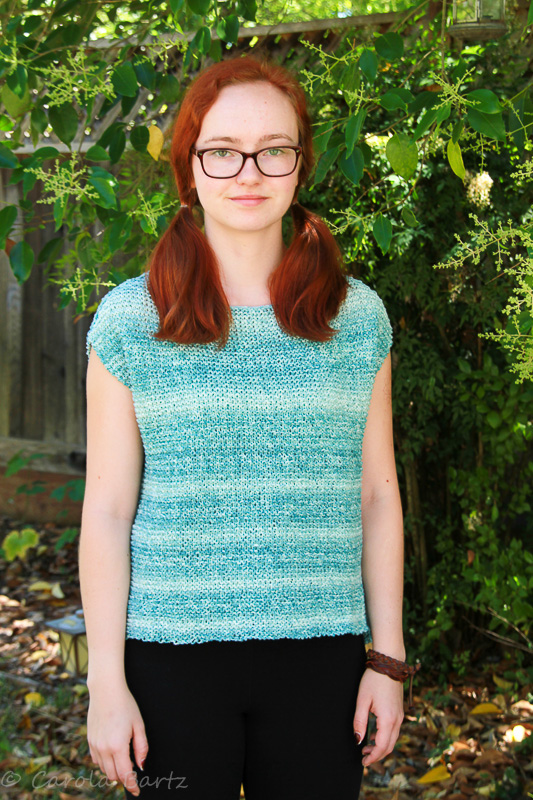 And it did. We were both really happy with the final result. I still have some yarn left over and am trying to come up with something else to knit - probably some doll clothes. 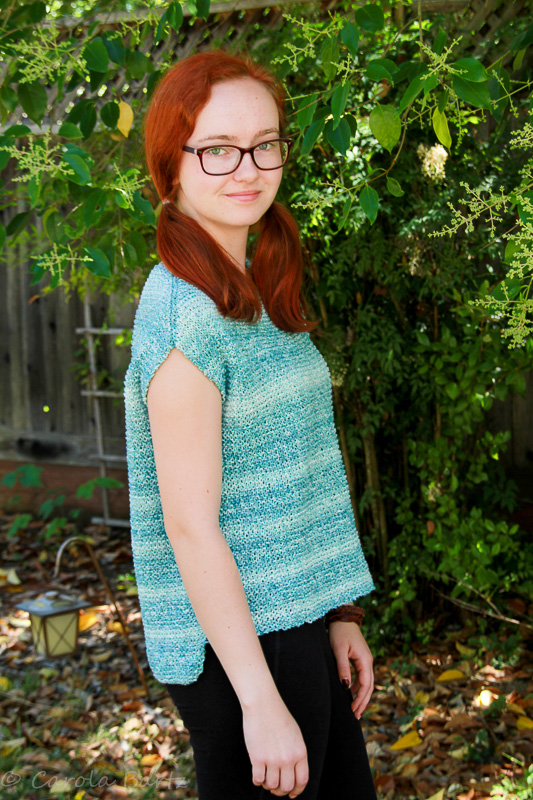 At the beginning of June I was interviewed by the lovely Emma Kay from Katoomba in New South Wales, Australia, for the Rainbow Artists Team on Etsy. I enjoyed answering all her questions and to finally see the entire interview on the Rainbow Artists blog. If you want to read it, you can find it here.

Kaefer rocks that sweater.
Loved your interview too, though my heart ached for the whale. And, a minor quibble, Katoomba is in New South Wales (not North South Wales.

That color is just gorgeous and I'll bet that cotton-linen blend is so cool and comfortable - perfect for summer!

What a beautiful sweater. I don't know how you had the patience to unravel a project and knit it again though. Still, the end was worth it. I've not knit a sweater with any cotton in the yarn, I'm afraid it will stretch for some reason. Just the sound of the linen/cotton blend sounds so comfortable for summer though.

She looks adorable in the sweater. The beautiful shade really compliments her skin and hair. I think you should make another one!

Gorgeous sweater! Love the colour! You did a great job, especially having to take it all apart! Congrats on the interview!

LOVE the colors in that sweater - would actually like it for me (only it would have to be as long in the front as in the back) - and Kaefer totally ROCKS being a red head!