I'm joining Linda's Wednesday Wit and Wisdom once again. The challenge is to post a picture, then write a short story or a poem about the picture as a writing exercise. My inspiration today comes from this photo of the cathedral of Frombork in Poland. 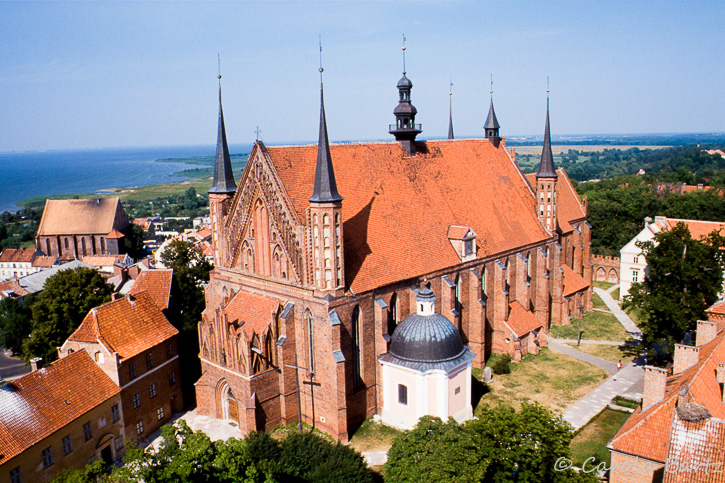 Frombork has been called Frombork only since 1945. Before that its name was Frauenburg and it was known as the "pearl of the North". It belonged to East Prussia and thus to Germany for many centuries. The cathedral was built in the 14th century and its most famous canon was the astronomer Nicolaus Copernicus who is buried in the cathedral.

However, today I don't want to talk about Frauenburg Cathedral. Please look beyond the cathedral, where you can see the blue of the water. This is what we call Frisches Haff , or the Vistula Lagoon. It is a brackish water lagoon on the Baltic Sea roughly 56 miles long, 6 to 15 miles wide and up to 17 feet deep. The Poland-Russia border runs across the lagoon.

Every winter the lagoon used to completely freeze over. So it did in the winter of 1944/1945.  When the Red Army marched into East Prussia in January and February of 1945, it was impossible for the tens of thousands of refugees to flee the Soviets across land. They had to take the route over the frozen lagoon. Thousands froze to death or were killed in air raids when the Russians bombed the ice as well as shot at the refugees with their machine guns.

It must have been horrific. No words can describe their panic and suffering.

My mother was a refugee. No, she didn't have to take this route. She was much closer to the West, living at that time in a small town on the river Oder which today is the border between Germany and Poland. However, fleeing in the cold of winter - and that winter was one of the coldest on record - with her mom and her not quite two year old daughter - my sister - wasn't exactly fun. They left their home on January 31st, my grandma's birthday. No one was thinking of birthdays, however. Everybody had just one wish - get out of this hell into safety, whatever it takes. They took their horses and some wagons and off they went in a long trek of mainly women, children and old people. They spent the nights in old barns, sometimes getting something to eat from farmers along the way, sometimes not. Everything was wildly confusing and no one knew what was really happening. My mother didn't tell very much about those weeks in the trek until she reached Lower Saxony which was safe. But the few things she did tell me unveiled the horror of being displaced in terrible times.

She never forgot those times. They haunted her in her dreams and sleepless nights. For many many years she kept a packed bag in her closet, ready to go again if she had to. I remember that as a child I wanted to laugh about it, but somehow the laugh got stuck in my throat.

Our parents never made us forget that they were refugees and we were children of refugees.

That's why my heart breaks for the refugees trying to get into Europe right now.

Snap.
I have been very, very ashamed of my government's treatment of asylum seekers for a number of years now. The problem is not going away, and simply blocking the door is beyond cruel.
Who of us wouldn't take those dangerous journeys in an attempt to ensure our families safety...

Thank you for sharing your story about your family and their escape from harm. It truly touched my heart and I can only imagine what refugees are going through today escaping the horrors in their homeland. How sad that your mother felt the need to keep a packed bag in the closet...just in case she had to run again. Our countries were built on refugees and immigrants coming to make a new life. Your mother and grandmother were so very brave as are those who still try to make a new life in a new place. Blessings to you. Pam

A heartfelt story that really illustrates the situation then and now. It must have been dreadful and it is so hard to even think about being without food or shelter, especially when there are children.
Copernicus has featured over the last few days in quite a few press articles, TV programmes and here again his name pops up in your article. Quite spooky.
So many ordinary people are trying to help the present wave of refugees but something really needs to be done at source to solve the base problem. It is heartbreaking.
Jo x

Your post resonated with me, Carola. I was born in a Displaced Persons Camp right after WW2 and lived there for a year while my father worked on getting us to the US. My parents never talked about the war experience until they were elderly and I pressed them for information. We were some of the lucky ones who got sponsors and found new homes. Many people languished in the camps for years. So, I too, feel great empathy for the desperate refugees trying to get out of the Middle East. I just hope the U.S. will do more to help them.

Wow your post is very interesting and sad. There were a lot of refugees frm my homelamd. My grandparents were American bormn and came To Poland but they weren't happy .S difficult times and the borders changed.The town ids great I was there twice, Love from Poland

Thanks so much for sharing this story and your feelings for current refugees. We have no idea the fear and the pain of leaving your home.

Thanks for sharing! Part of my family went the same way. I wouldn't exist if they wouldn't have made it out of Eastern Prussia. Heartbreaking!

Reading such a personal story just brings home all the difficulties in the current problems. I can't imagine how difficult such a situation would be.

thank you for sharing this! I can't even imagine going through this!
My friend, I have been away from blog land too long! Trying to come back! Big Hugs ;o)

Thank you Carola for the sweet comment you posted on my Flickr gallery...
I just spent a little time visiting your blog, reading several of your latest posts and thus knowing you a little more... appreciating your stories and your positive attitude...
About your last post, thank you for sharing the story of your family... Thinking that there has always been refugees in one place of the world or another... it's so sad... how hard to leave one's own country and leave everything behind, never sure one will return one day...
Recently I've met a woman who left Iraq with her husband and 2 teens... they have been welcomed in my town... they were both teachers in Iraq... how sad... they've left everything and arrived here with only their clothes... they are so many like them...

I really enjoyed reading your post, Carola.
I have met some refugees and have heard their stories - which are heartbreaking.
I couldn't do anything else to help them except to listen. I am glad I had the opportunity.
May there be freedom for all!
Peace :)