I'm joining Linda's Wednesday Wit and Wisdom again. I wish I could do so every week, but I think at the moment that's just not possible. But hey, here I am!  The challenge is to post a picture, then write a short story or a poem about the picture as a writing exercise. My inspiration today comes from this photo, taken in 2005 in Alaska. 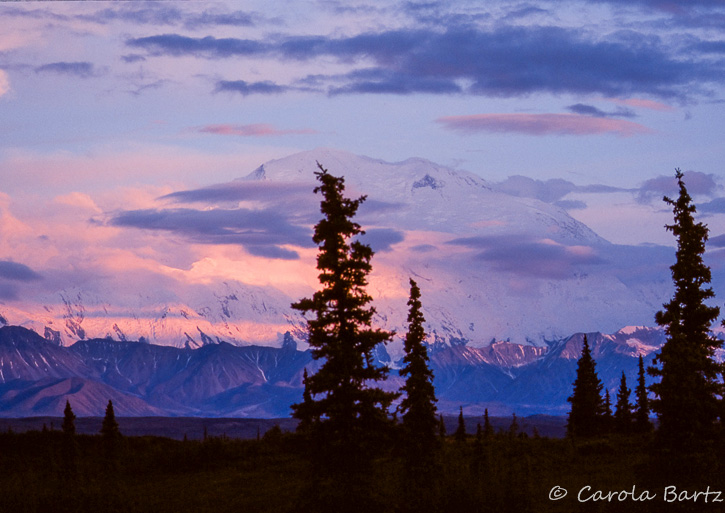 They had been on the camper bus for six or seven hours - she had stopped looking at her watch, being too occupied looking at the landscape passing by. They already had seen so much wildlife here - a little fox, a grizzly bear looking for food at the hillside, caribou, another bear, two beavers busy swimming around their little lake. Now they were approaching the end of the journey - the campground in the heart of Denali National Park, at Wonder Lake.

You couldn't tell that it was already past 10:00 pm. It was still light as day, even though she started to feel a bit tired. But she was also excited. And besides, the day was far from over. They still had to walk up to the campground with their huge backpacks, pitch the tent and then finally they would be able to curl up in their sleeping bags.

No one seemed to sleep in the campground anyway. There was still a quiet buzzing around - someone was playing the guitar, campfires were hissing and there was the constant humming of mosquitoes. Oh, the mosquitoes of Alaska! Good thing they had their nets with them that they wore over their Tilly hats, and the gloves as well. Those mosquitoes were hungry for fresh blood.

Finally the tent was pitched, the mats rolled out and the sleeping bags ready for them. The sun was at an angle now. They knew that behind the clouds Mount McKinley - or Denali - was hiding, and they were also aware of the fact that you rarely saw it without any clouds, if at all.

And then the magic happened.

The sun started to glow - the best Alpenglühen you could ask for. The clouds were glowing, it was amazing! But what was that? The clouds were parting - as if to greet the new day, a couple of minutes before midnight. And through the clouds the most amazing mountain was appearing - huge, white, bold. She was speechless about the sheer height of the mountain. Majestic was the word that came to her mind. It was still and big - it reminded her of a stranded whale on the beach.

The entire show lasted for five minutes until Denali retreated into the clouds again. She felt like it had just greeted her and let her know, "yes, you little human, you are in Alaska, and this is where nature reigns".

Thank you. You have transported me to somewhere I have always longed to see. So much.

I have never been to Alaska but you should be writing travel brochures because you really made me want to go!

A great story to illustrate a fabulous photo - you were so lucky to capture it at the very moment Denali was exposed. I enjoyed the one trip I made to Alaska, possibly because it was late Autumn and the mozzies were few - I'm deathly allergic to them and would have a terrible time there in the high season, would never be able to leave my net!!!

Beautiful story. I so enjoyed it. We were transported. I'd love for you to share every week. But I know how it is. I don't always write a story. Today I just told a story about a photo. I love to write.
But sometimes my brain just doesn't function. Work tends to drain on me. Thanks for sharing. It was nice meeting you.

Carola, what a wonderful story and picture. It is awesome. I've never been to Alaska, and not sure I'd go on a camping trip, but would love to see all the wilderness. Thanks for joining in!

incredible beauty and loved your narrative to go with it. :)

Great narration and great photo!
I think these sort of experiences teach us not to take 'anything' for granted.
Have a Wonderful Day!
Peace :)

A stunning photo and a great story, Carola! I love the colours in your photo x