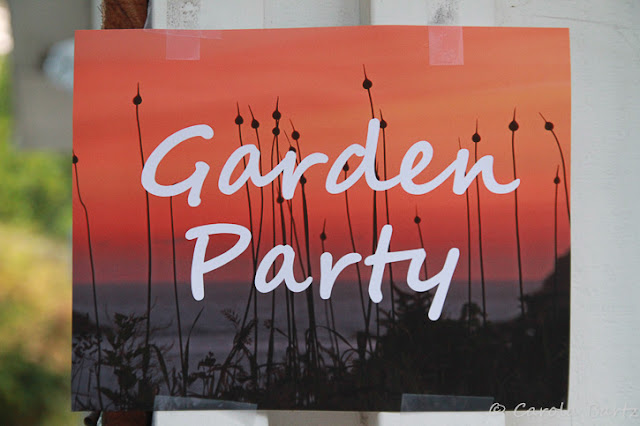 I didn't write a single blog post at all last week. I just didn't have the time because I was preparing our garden party that took place on Saturday.

On the hottest day of the year up to then (Sunday was even hotter with a balmy 104 F)! It wasn't only hot, it was smokin' hot - literally. In the early morning, the smoke of the big wildfires north of us made its way down into our county and lingered the better part of the day. Thankfully it had disappeared mostly when our party started in the late afternoon, but the air is still hazy and a bit smoky. And it's still hot.

But I digress. I wanted to tell you about the garden party. Every summer I had talked about a garden party, but except for one summer quite some years back I never followed through with my plans. This summer, though, was different - and I finally had the party I was dreaming about all the years before. 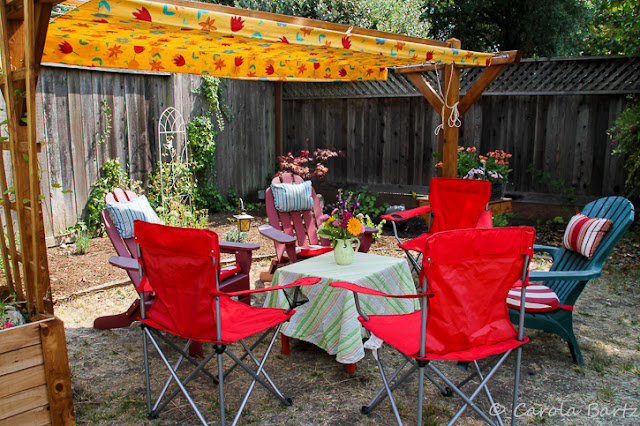 Do you remember the clothesline the Geek built for me? It's perfect to change into a canopy sort of thing for shade for a party. I just threw a huge piece of sunny fabric over the lines, fastened it with my bird shaped pegs, set out a table and a few chairs beneath it - done! It was a popular spot to hang out during the party. 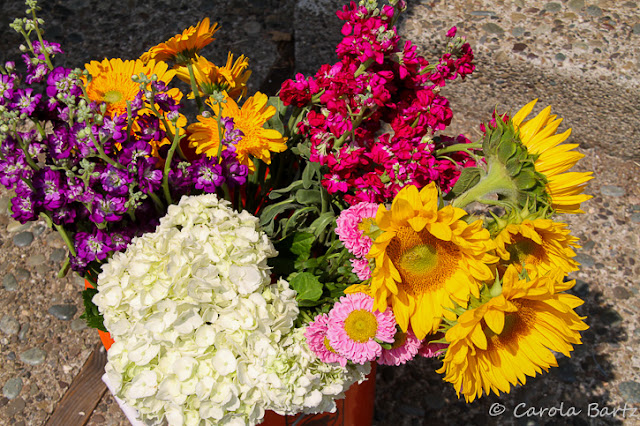 I had bought flowers to make little bouquets for the tables - that was the real fun part of the prep work. I love to arrange flowers in a casual way, and this is what it looked like. 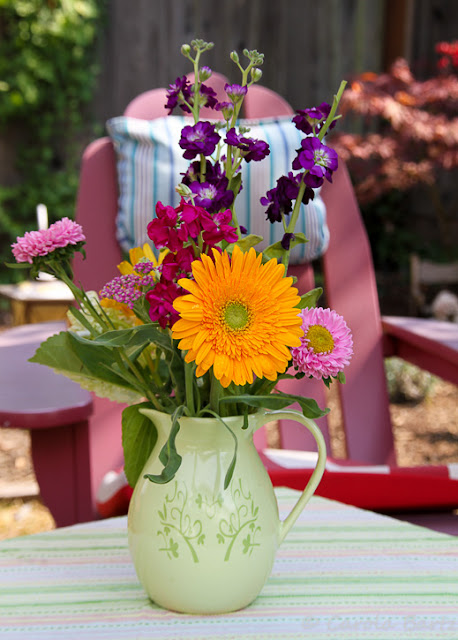 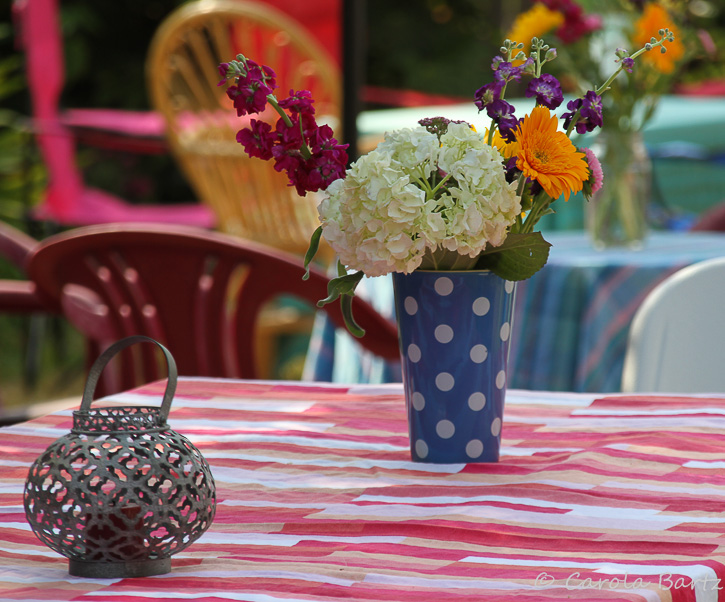 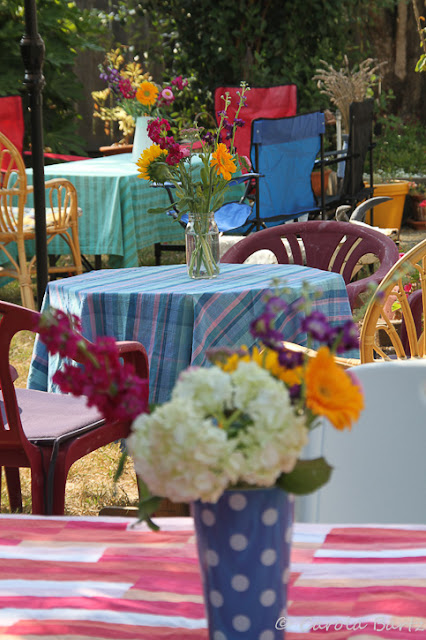 I wanted to fill this lovely wire basket with flowers as well. I usually put my harvest in it when I walk around the garden picking the ripe veggies. I found these stunning gaillardias and a petunia in one of my favorite nurseries. I will plant all of them as soon as it cools down a bit. 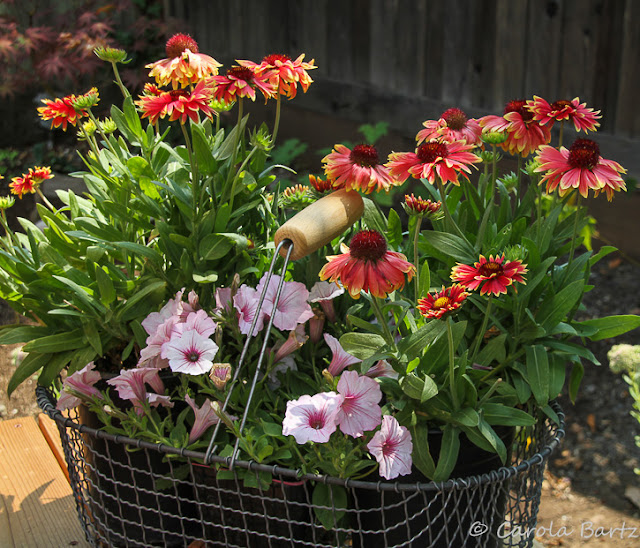 And then we were just waiting for the friends and neighbors we had invited. 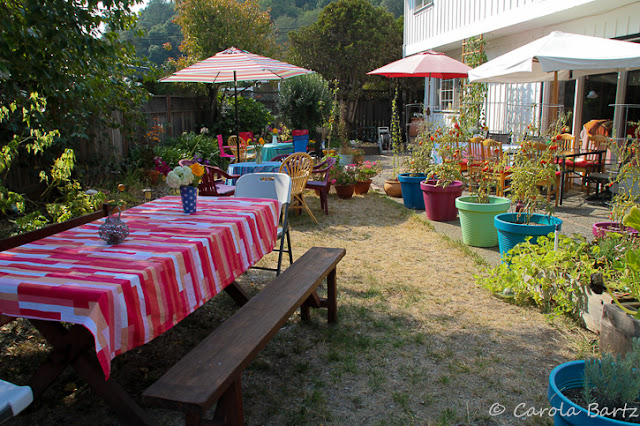 They came and most of them had brought something to eat or to drink. No one had to leave hungry! 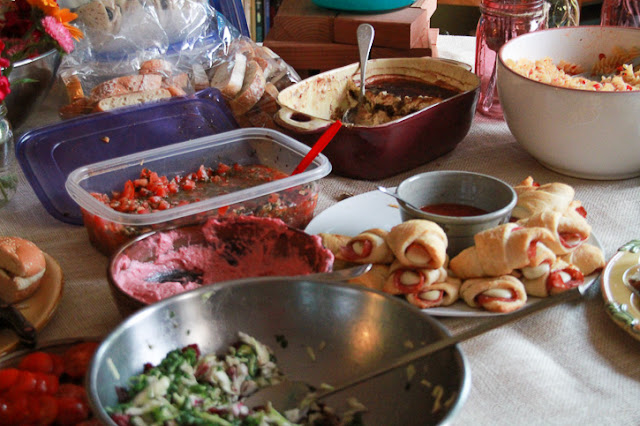 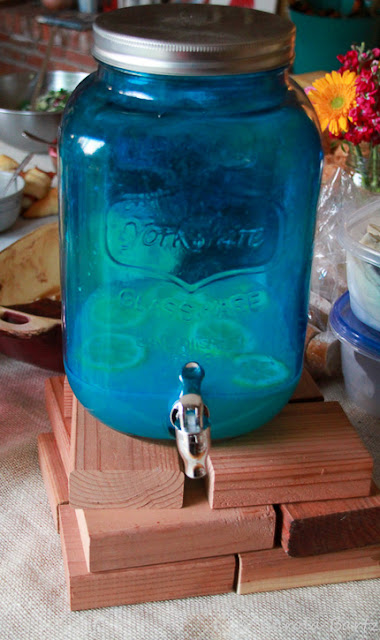 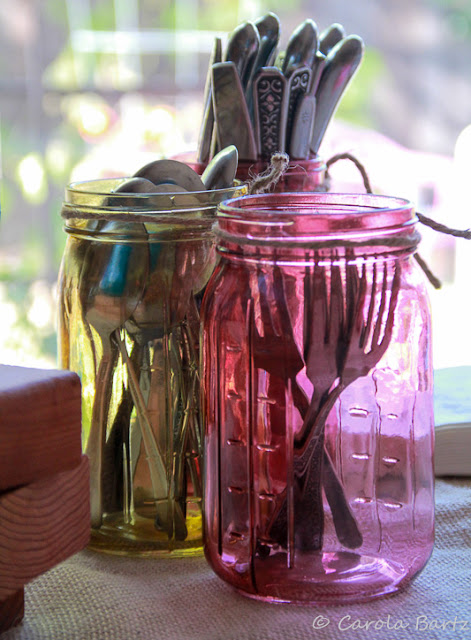 I had made a special German drink that is very popular at summer parties, and I will tell you more about it in one of my next posts. I got a lot of ideas from Pinterest, the Geek created the wooden base for the lemonade and even Kaefer had made some of the food. Very soon the party was in full swing. 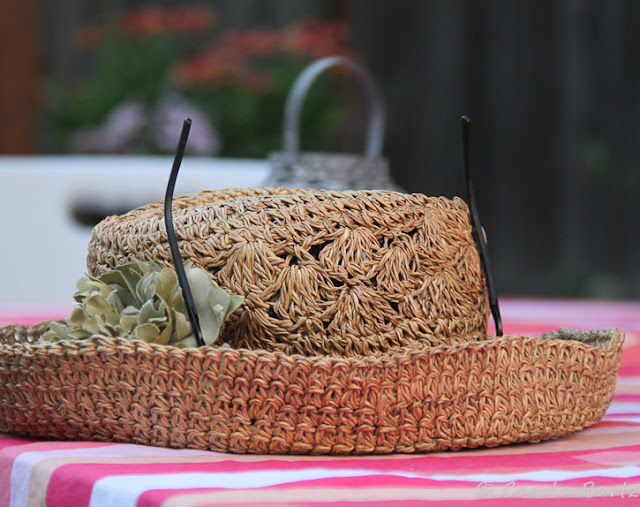 The girls had occupied a table for themselves and had such fun together. 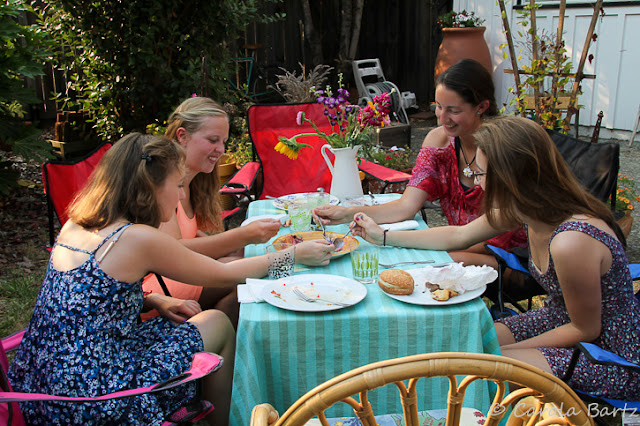 The next morning didn't look much different than right before the party... 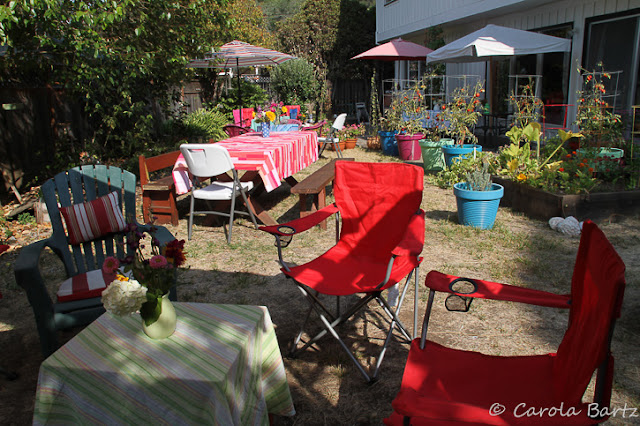 That looks absolutely lovely.
Friends and flowers and food go together soooooo well.

That's one awesome party, Carola!
I love the floral arrangements and the lovely garden that you have.
Beautiful photos and nice narration! The foods served also look delicious.
Have a Happy Week!!
Peace :)

This looks and sounds like so much fun, Carola! I especially love all the color everywhere...the mismatched tablecloths, the chairs, the flowers, even the jars of flatware. It all looks so casual and relaxed and pretty. The clothesline canopy was a brilliant idea!

Oh your garden party looks so fun and colourful. I love your clothesline and the way you used it for shade with the bright fabric. It all looks amazing. Pam

the smoke and heat is ashame. looks like you all had a wonderful time. Such pretty details and yea for the clothesline.

i had my first garden party this year. usually i can not dream of doing so because of mosquitoes. but this year there were hardly any. i think because of lack of rain this year. So unusual. We also have smoke from fires.

Wow, so much fun and so beautiful!!!

Food, friends, family, and flowers - I can't think of anything better. I love all the bright colors you chose. We are having haze from the western fires. We need rain badly to wash the particulates from the air. However, it's not hot here!