A Tiny Place on the Water 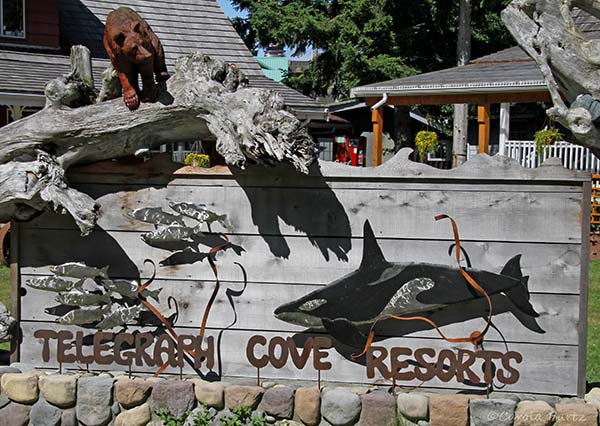 Today I am taking you back to Vancouver Island - to be more precise to the North of Vancouver Island. "North" begins at Campbell River, the "end of civilization" at it is often called. Beyond here, "there's nothing up there worth seeing" as anyone below Campbell River will tell you. Nothing could be further from the truth.

After you have passed Campbell River, you enter the extensive wilderness of Vancouver Island. Here, you can find small primitive campgrounds where you can be on your own - our first night here was spent in a campground just north of Campbell River and we were the only people there. It was a bit unusual, especially when we heard someone walking around the campground in the middle of the night - someone with four legs! We never found out what animal it was - a bear? an elk? - but it didn't bother us and we eventually returned to sleep.

This part of Vancouver Island is mainly used by the lumber industry which you are aware of by the many lumber truck signs along the road. This sign below means that lumber trucks enter the road from the right. There are also signs with the front of the truck on the right side (just flip the image horizontally in your mind) which means the lumber trucks enter from the left. At least this is what I figured out after observing this for several (many) kilometers. 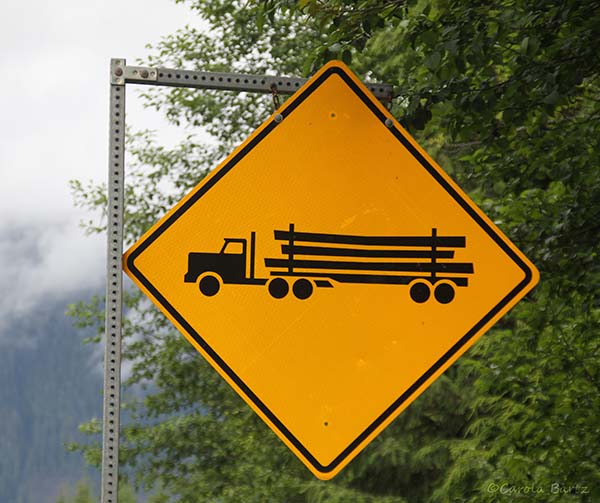 The lumber floats on the water, something I had only seen in Scandinavia before, and it is also worked by little boats here. 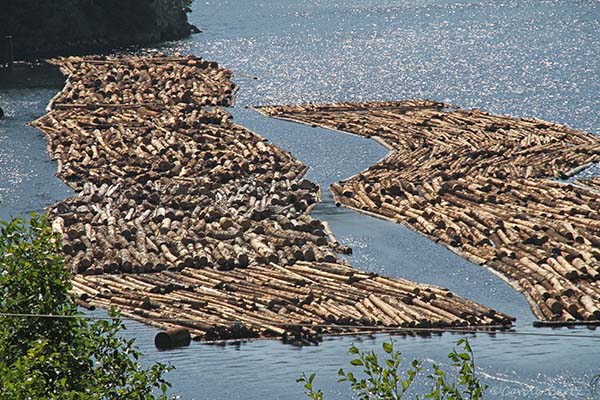 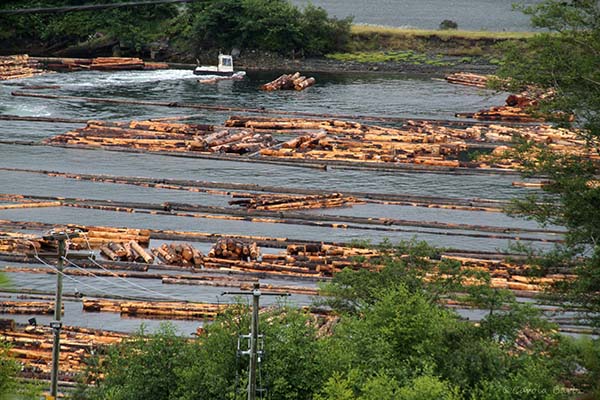 The North Island has some quirky outback communities, one of them is Telegraph Cove. It is a tiny funky place on the water and is a complete boardwalk "town" with wooden buildings built on stilts. 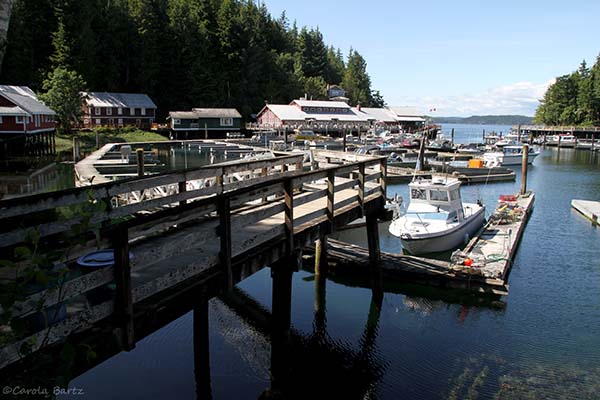 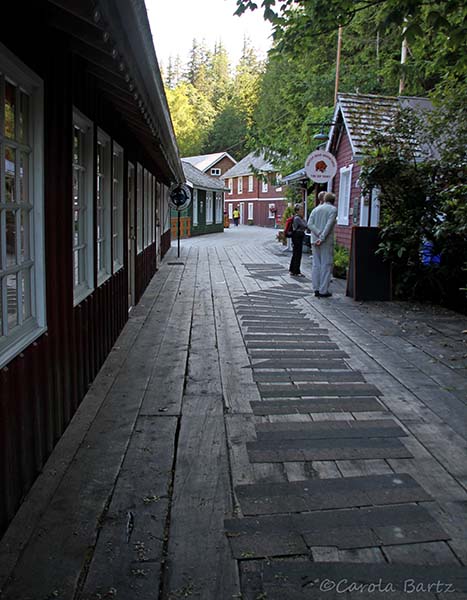 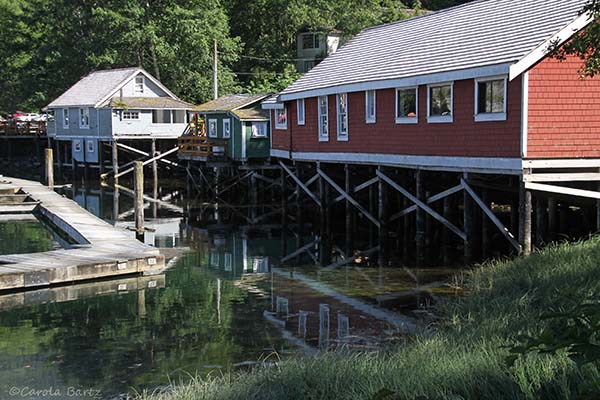 Right at the beginning of the boardwalk you can see what this place is all about and why you find quite some tourists here: 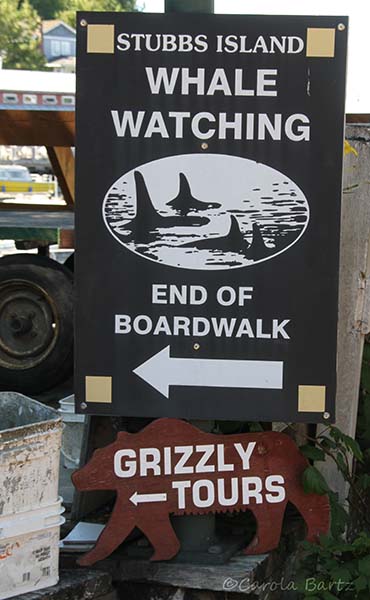 Some of the best whale watching and grizzly bear tours start here in any kind of weather. These tours are not cheap, but I do think they would be a wonderful thing to do. 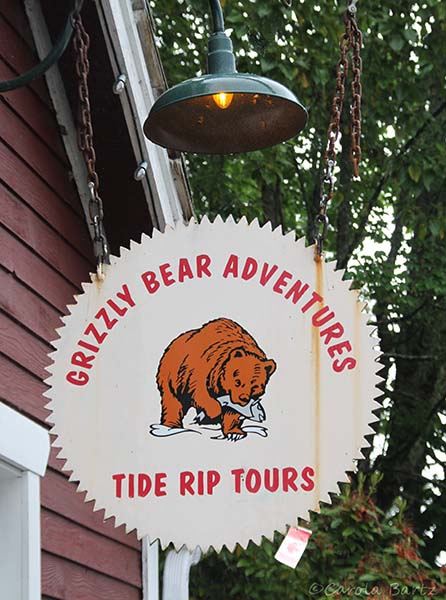 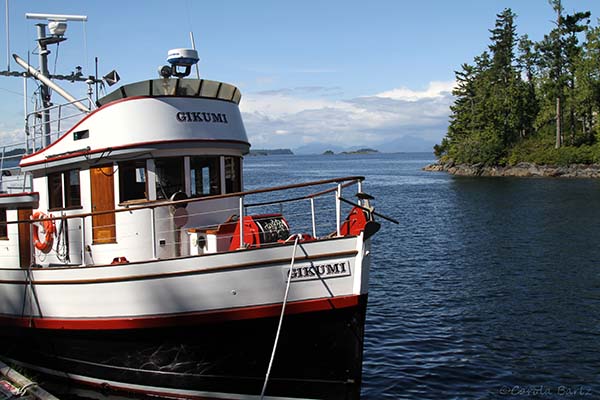 One of the whale watching boats 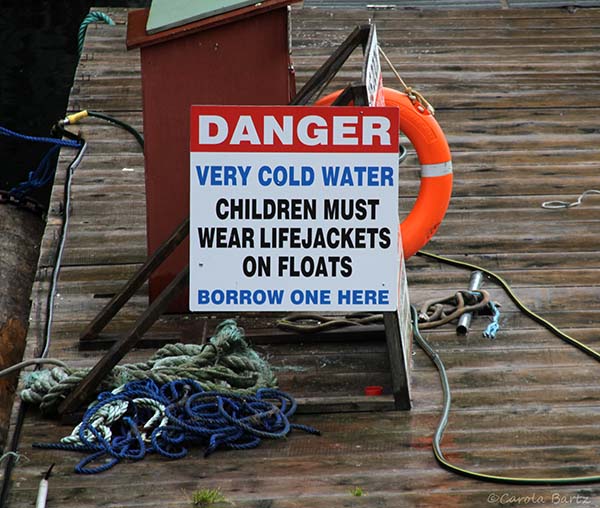 It's a dangerous place!

Unfortunately we didn't... but we visited the Whale Interpretive Center at the end of the boardwalk. It has some fantastic exhibitions and give you a lot of food for thought. This exhibit is the skeleton of a fin whale, the second longest animal in the world. 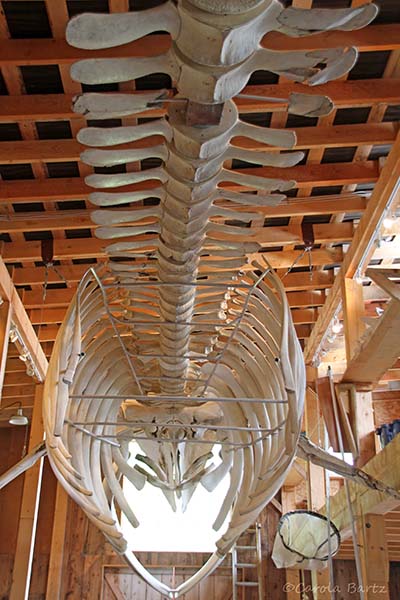 The busiest place in this small community is the marina with all its little and bigger boats and fisher boats as well. 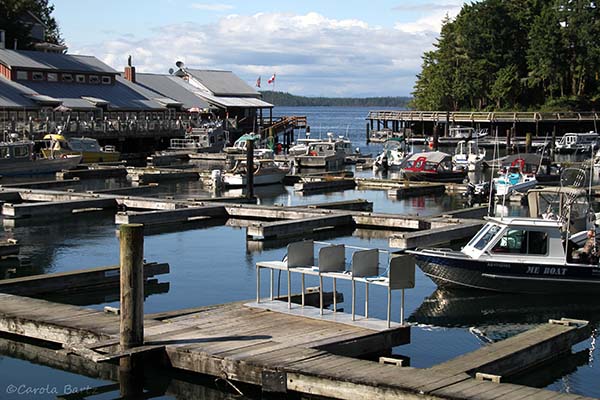 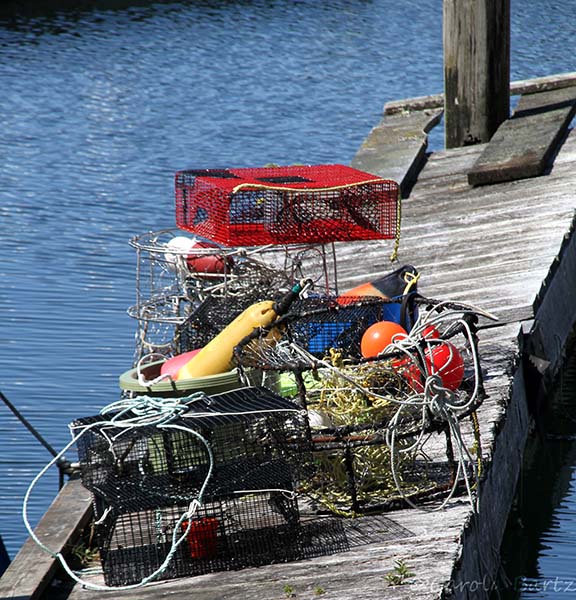 Another great place to visit is the Killer Whale Cafe almost at the end of the boardwalk, right across from the small office of the Grizzly Bear Adventure Tours. 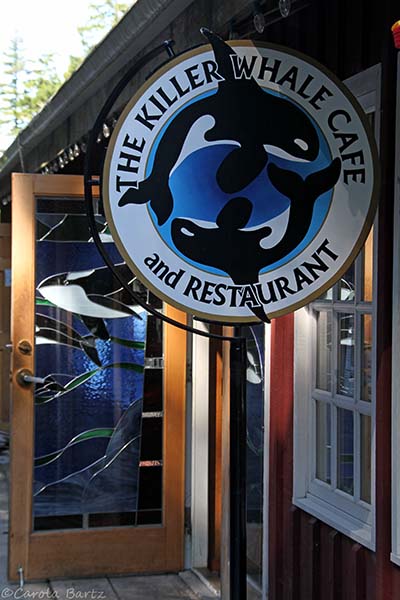 We ended up here twice during our stay on the North Island. Not only does it have a fantastic Killer Whale Pale Ale (try to say that very fast!) but it also serves the most delicious fish and chips we ever had. 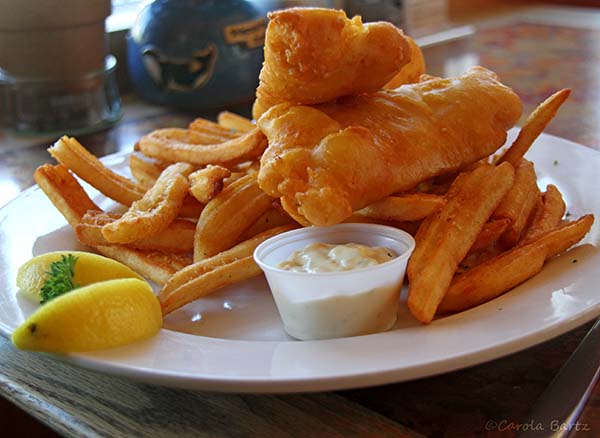 You could choose between cod, salmon and halibut. While the Geek and Kaefer had cod I opted for halibut and a glass of Killer Whale Pale Ale - oh yummy!!! 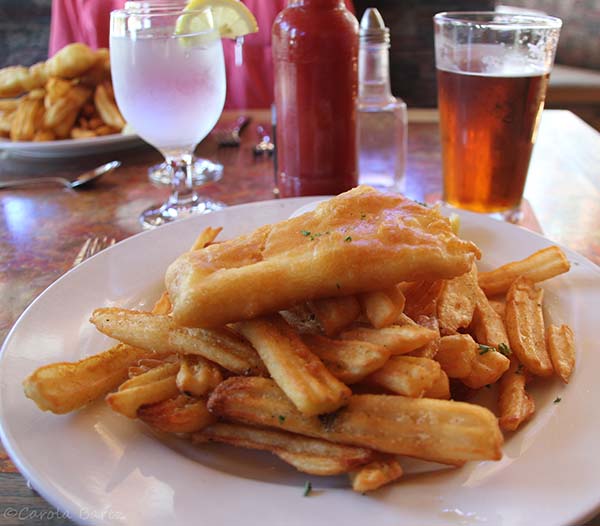 Thanks for taking us along! It's been so many years ago, but on a trip to Anchorage Alaska I can remember having ale, and fish/chips just like that! Yummy!!

I think whale watching would be so neat. It would thrill my soul to see such a creature. Love your pictures and the fish and chips are making me hungry.

Beautiful photos. It really looks and sounds as if you had a wonderful time!

I would LOVE to do a whale watchin tour - and the grizzlies watching tours too. Thank you for this introduction to a stunning area

Totally loved all of these shots and what a wonderful place to go!

My mouth is watering from the food!! I love all the pictures! Such a beautiful place!

I would love to go there! Wow! Amazing photos and thanks for taking me along x

you have made me want to go there, beautiful and yummy!