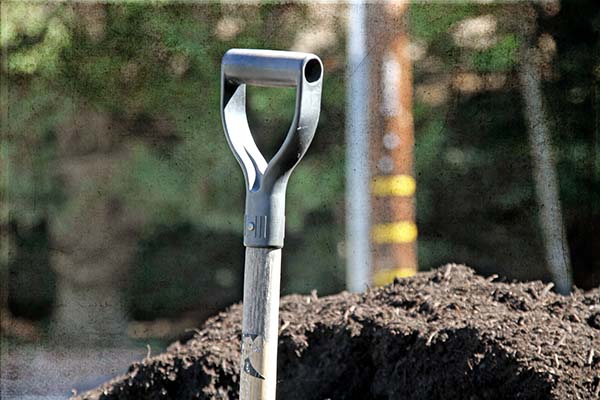 Processed with Kim Klassen's texture "kk_coolgrunge"
The house we bought in April came with a huge lawn in front and beside the house (it’s a corner lot). In my world, “lawn” and “” just don’t go together very well. A beautiful, lush lawn needs a lot of water; however, water is very precious in and not something you waste just for “curb appeal”.


So I decided to get rid of the lawn. I could have rented heavy equipment and get the job done in a weekend. It would have been messy, noisy and very disruptive. However, I was looking for the softer, more organic way. More laborious as well.


One afternoon in the summer, my daughter and I measured the lawn and realized there were almost 1900 square feet that I planned to turn into a bee and bird haven. That was quite an intimidating number. But thanks to my sometimes overwhelming naivety, I kept on working on my project. 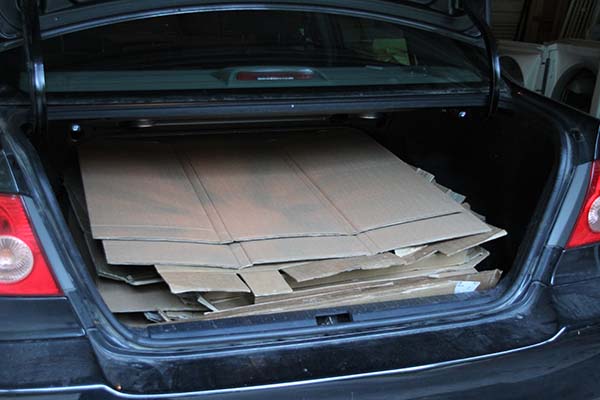 The next step was getting enough cardboard to cover those 1900 square feet. We already had a huge amount of cardboard thanks to our recent move, but by far it wasn’t enough. So I developed a new, temporary hobby: dumpster diving. My daughter was deeply embarrassed and wouldn’t get out of the car when I discovered a promising full dumpster next to a big store. My husband, however, joined me in this new kind of how-to-spend-the-evening, and we had several “dumpster dates”, hanging out behind the big box stores. The local bike shop became our new best friend. 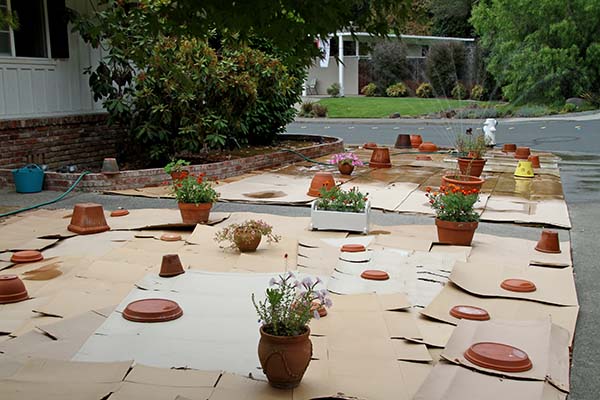 When I had enough cardboard, I called the compost company for the delivery of 20 cubic yards of “gardener’s gold”, beautiful smelly compost. 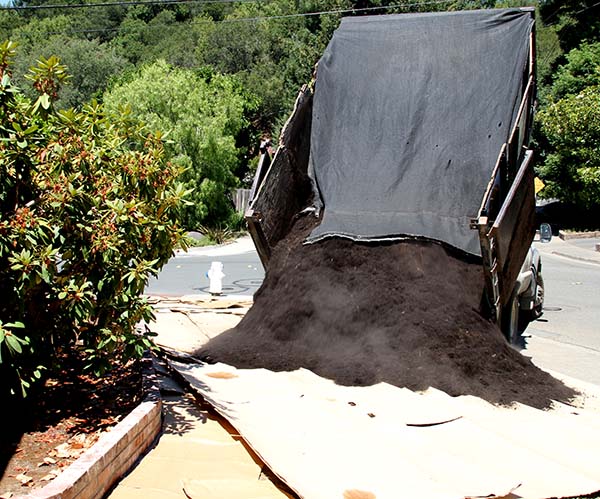 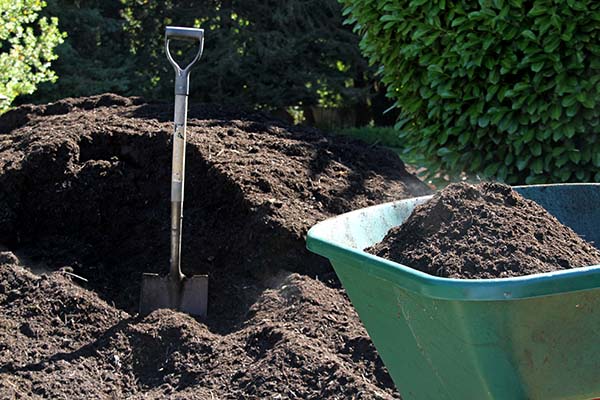 The cardboard will eventually break down (that should take 2-12 months) and attract earthworms who then will work the soil. I put out a layer of 3-4 inches of compost, a back breaking job. Of course, right after the delivery of the compost we had a heat wave which allowed me to work only in the early morning hours. Usually, I was out there by 6:30, shoveling away and often helped by my daughter, and had to stop by 9:30 at the latest. Besides working on my project, it was a wonderful opportunity to meet the people in my new neighborhood, who jogged and walked their dogs at this time of day. Almost everyone stopped to ask me what I was doing. 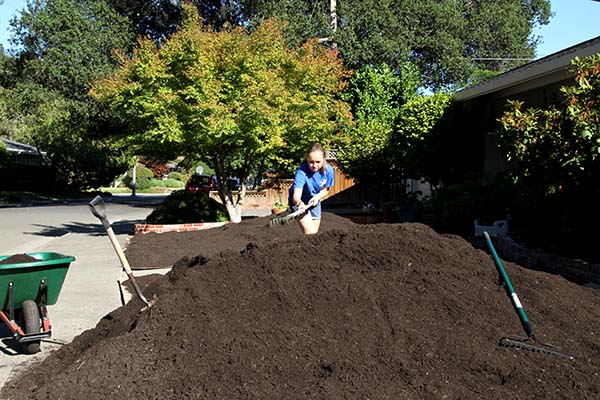 Now the compost is evened out and I’m waiting for the rain, already planting in my head – mainly natives and drought tolerant plants. In my mind I see birds picking the seeds of the spent flowers and hear the busy humming of happy bees. 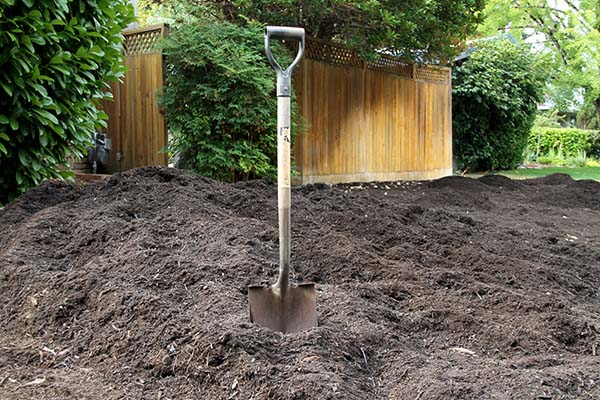 I can’t wait to start planting. 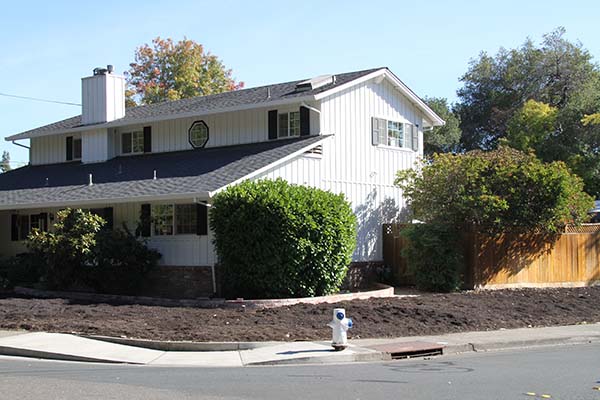 Cross-posting at Vision and Verb, a global gathering of women of this age. If you have never been to Vision and Verb why not check it out now? It's one of my most favorite sites in blogland.

Email ThisBlogThis!Share to TwitterShare to FacebookShare to Pinterest
Labels: gardening, Vision and Verb

What a task!
Questions: 1) what will prevent the grass from growing back? Didn't you need to take it out first?

2) are there other homes in your neighborhood who have switched from lawn to plants?

3) did you not have to over come CC andR's to be able to do this?

My brother had this done in his much smaller front yard at his home in Richmond and it looks great.

He also had a drip system put in for watering. Will you do this as well?

I admire all that you have done to realize your dream garden! More power to you!

Wow! A huge project, but it will be so worth it in the end! I like your thinking and can't wait to see your planting. Been somewhere a bit warm myself last week x

Well done Carola, what a great big effort! It'll be fab. It's a huge plot!!

OK, now I officially think you're nuts! *LOL* No, seriously what a huge project. I can't wait to see it finished and with happy birds and bees. :)

That will be beautiful!

I love the expansion of your theme at V and V that the additional photos provide. Such an exciting (and yes, back-breaking) time.

Hard work indeed! I'm really impressed that you understand the CA/water situation enough to do something about it. We haven't had any part of our home lot devoted to lawn in years and don't miss it.

I'm with Lynn on these questions. Is the grass underneath? It seems too easy. It will be gorgeous when your done, I'm sure. A lot of planting ahead of you. Keep us posted!

wonderful!! I love how you undertook this project and your reasoning BEhind it especially. I keep wishing I could bottle up the rain we are blessed with here in South Florida. I lived in San Diego and briefly in San Rafael where I went for a time to a school in Santa Rosa. It was nice to revisit via your post and photos. I also popped over to V and V which I vaguely recall visiting once BEfore. I love the serendipitous nature of these opportunities to share "out loud & online" and the revisit reminded me of so much that sometimes slips completely out of view. Felt really fine dipping a toe in there as a woman of this age myself...

I am admiring, good work. I am greeting

You know we all can hardly wait to see what this looks like once planted, Carola. You sure laid the groundwork. HA!

That was a good deal of work! You must feel quite satisfied now, as your garden is magical.