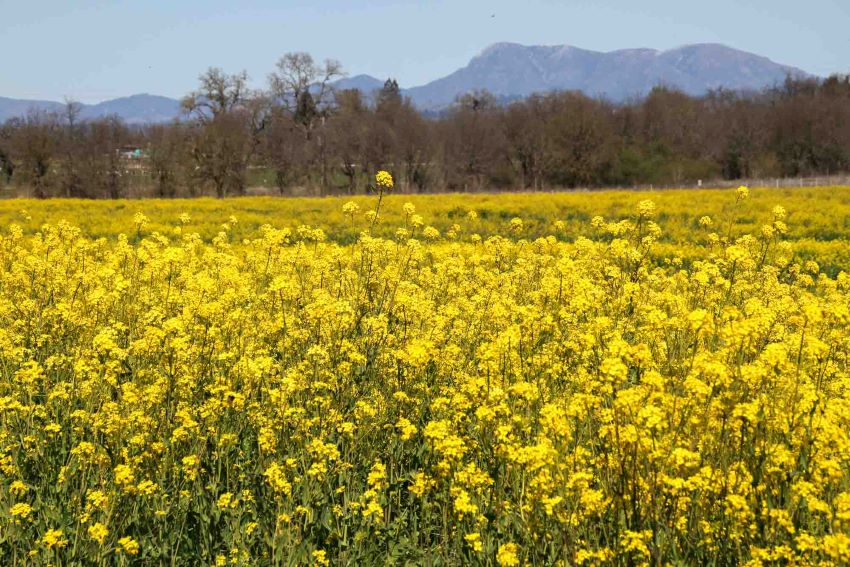 It's mustard season in Sonoma County, when the white mustard is blooming in the fields and in the vineyards. It is always a lovely sight that I never get tired of. A few years ago, the Geek and I went into the Dry Creek Valley to photograph the mustard in the vineyards, but this year I was passing this wide field when I returned from my walk in the Laguna. There was a dirt strip by the side of the road where I parked and started shooting the yellow mass. 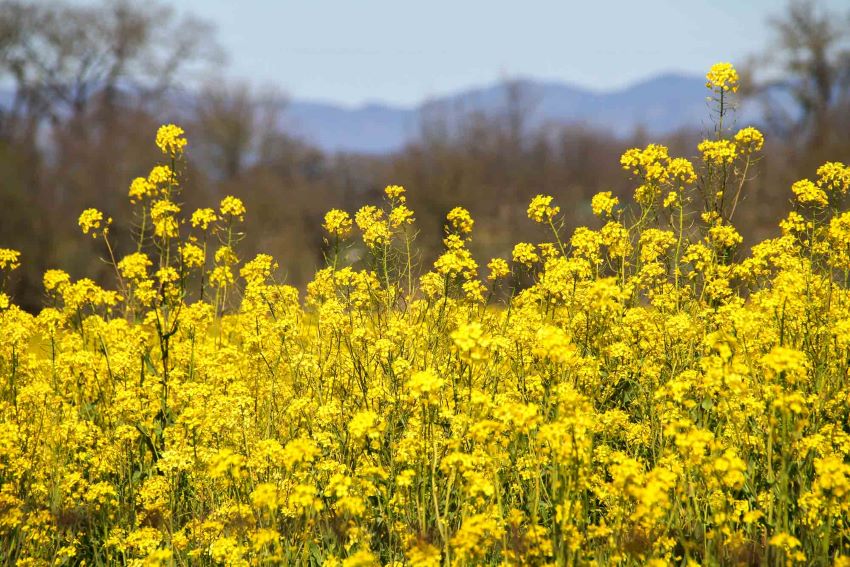 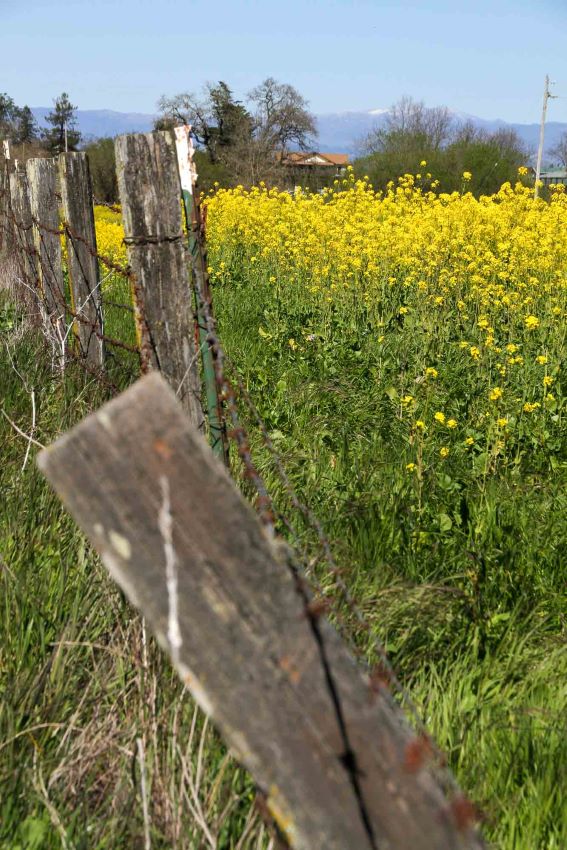 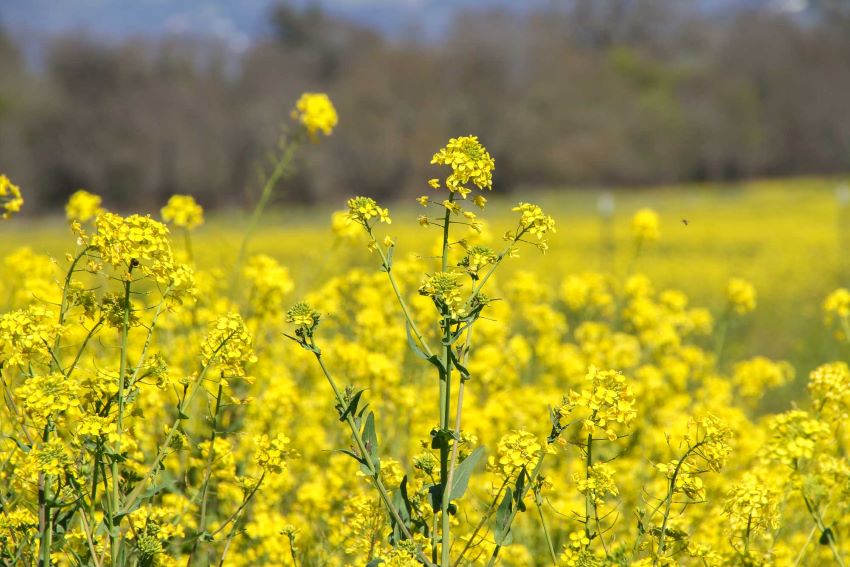 I was lucky that I had taken my big camera that day, because I wanted to take photos of the birds in the Laguna (those pictures will turn up in this space soon). This was actually the first day this year that I was using the DSLR again. During the pandemic I had become really lazy and was mainly taking pictures with my phone. While I was photographing the birds and now the mustard I realized how much I had missed my big camera. 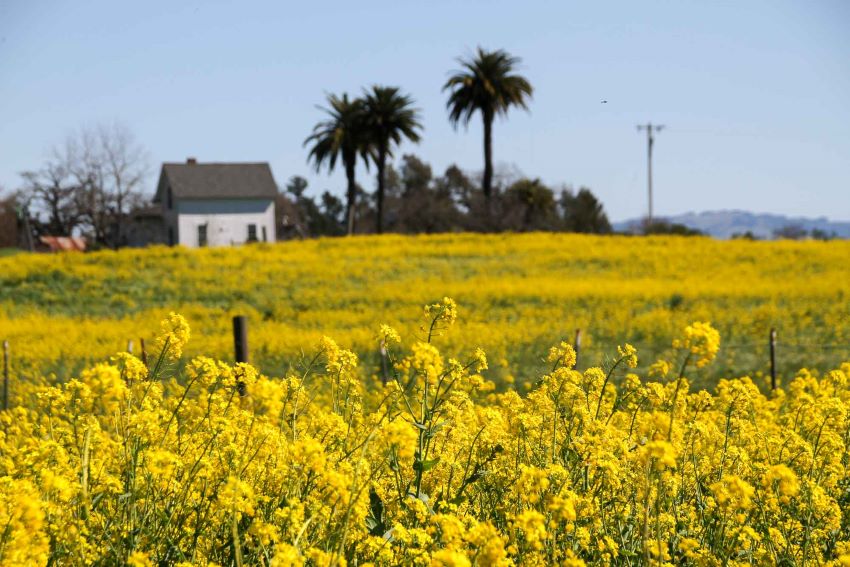 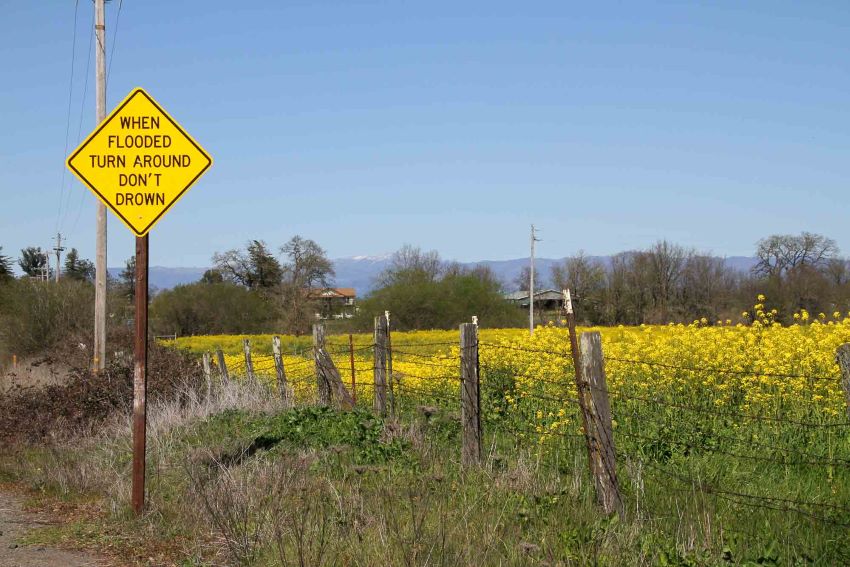 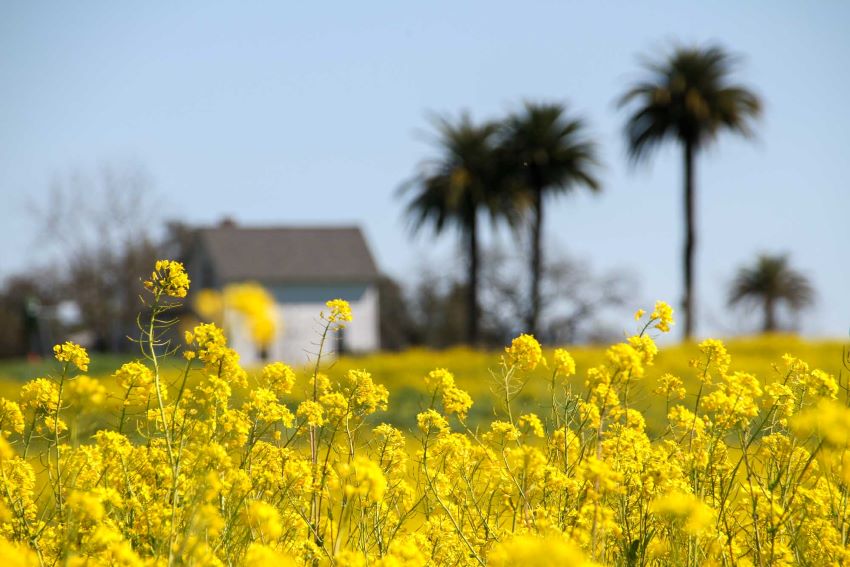 Mustard belongs to the Brassicaceae family. It is native to Europe, but is so common in North America by now that it is considered "naturalized". It turns up where the soil has been disturbed, I have read that it is good for erosion control and it supresses weeds. Recently I read an article about how it made its way to the California Coast and the findings were surprising. The scientists stated that mustard seeds were found in the bricks that were used to build the missions along El Camino Real and thus got into California. I thought that was an interesting but plausible theory. 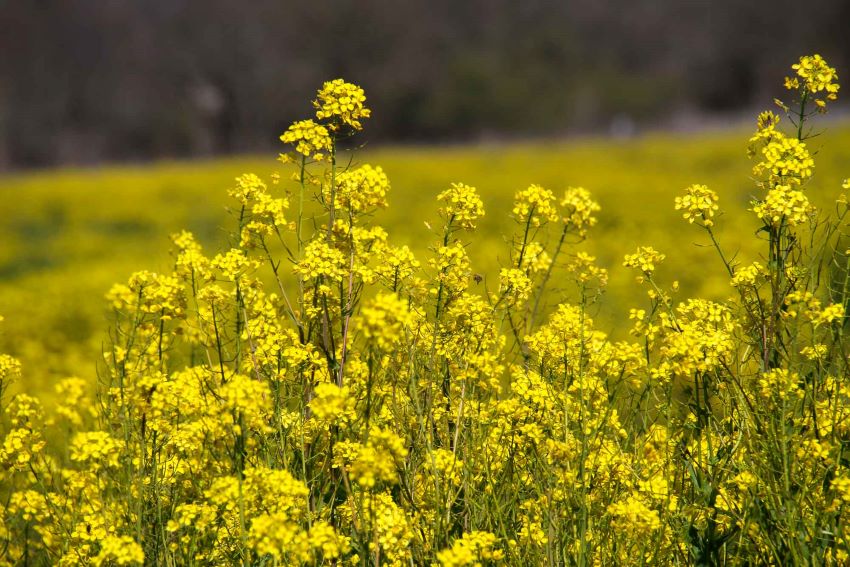 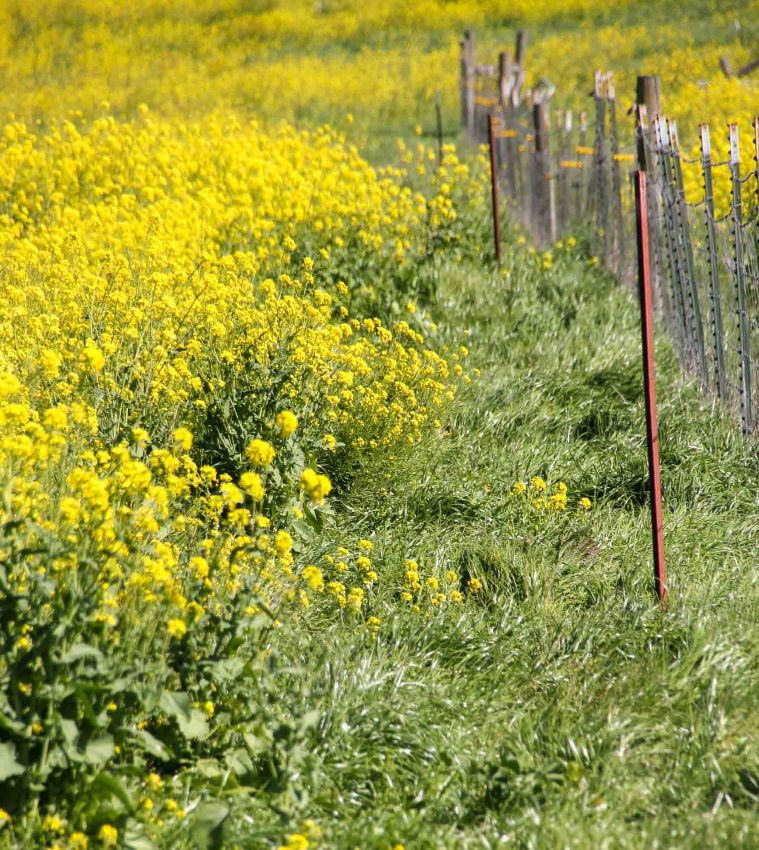 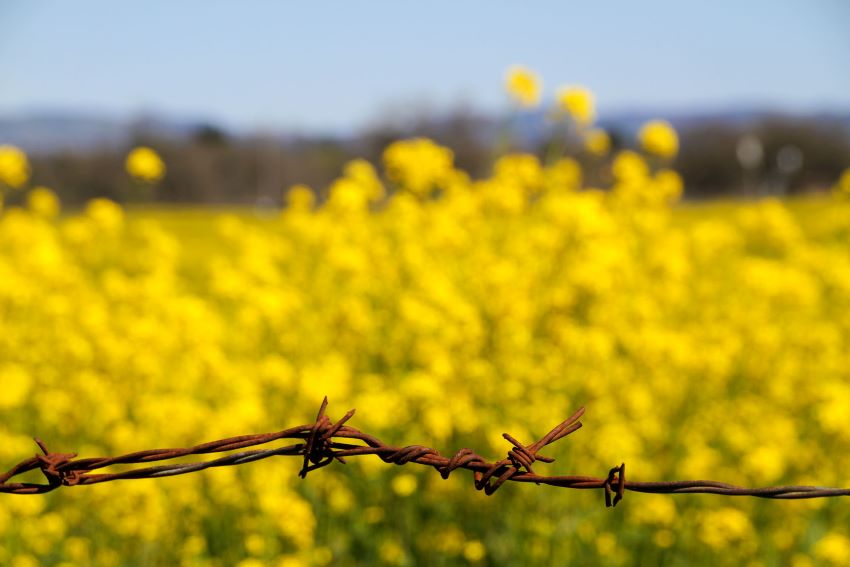 The mustard blooming season won't keep for very much longer. When it gets warmer it will disappear from our fields and vineyards. Since it is an annual plant we have to wait until next late winter / early spring to admire it again. 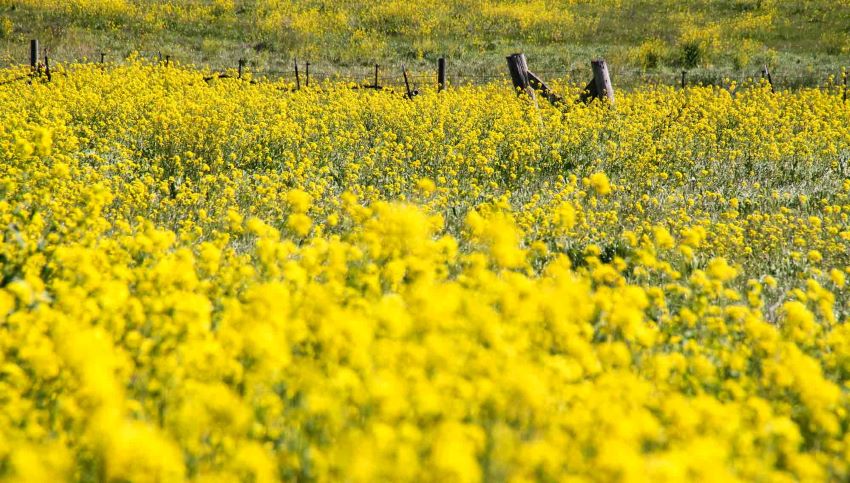 These photos of the mustard field are beautiful Carol. The yellow is wonderful and what a great view to actually see.

How vibrant. How beautiful - and how beautifully captured.
Love the flood warning sign too - which as you know is totally relevant here at the moment.

The mustard fields are beautiful, Carola. I especially liked the photos with the fences and the barbed wire and the little house in the distance. I like that yellow sign too. What a pleasure it is for you to see the mustard fields every Spring. It's still cold here, but the sun has been shining the last couple days and our snow has melted. I am curious as to what Spring looks like here in the mountains. : )

beautiful.
I remember Calif. mustard fields here we have Canola, which look much the same.
It seems the entire plant is edible, have you enjoyed eating it?

Seeing the colorful yellow mustard fields, Carola, was very cheerful on what will be a rainy Sunday here in Nashua, NH. We would often see the mustard plant growing in fields when we lived on the VA eastern shote, although not as plentiful as in this post. Mustard is one of my favorite condiments.

I would love to see this in person. That yellow is so brilliant and colorful! The photos are fabulous.

The colors in your area are so vivid! I love the bright yellows against the blue sky - stunning! It's very brown where I am - but at least most of the snow is finally melted. It's progress.

I don't know why, but these photos really made me happy! Maybe it's all the yellow from the mustard! The photos are so "freeing" to me! Love the flood sign! LOL! Big Hugs!

I love the mustard against the old fence. You had a sea of yellow to photograph!