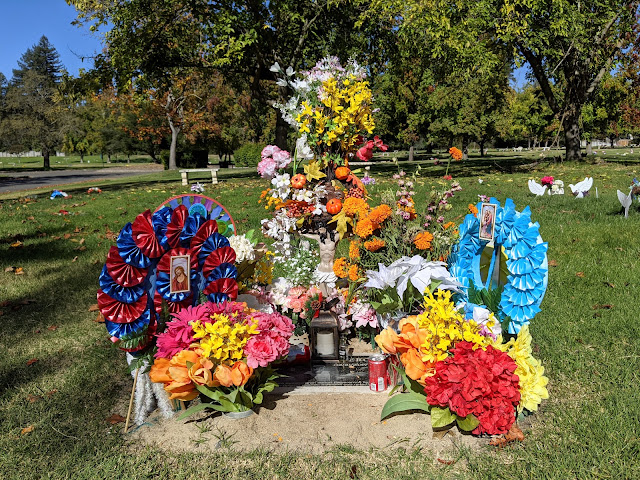 After last week's Tuesday I had the strong desire to get out, to seek the calmness of nature and to think of anything else but the election. On Thursday I had to walk to the mailbox to ship some Etsy orders and then decided to go to the old rural cemetery. Right next to it is the Memorial Park that I usually only walk through, but this time I took some detours and ended up in the "Mexican" area where I had never been before. I wonder why I had never explored it. Since it was right after Día de los Muertos the gravesites were richly decorated. 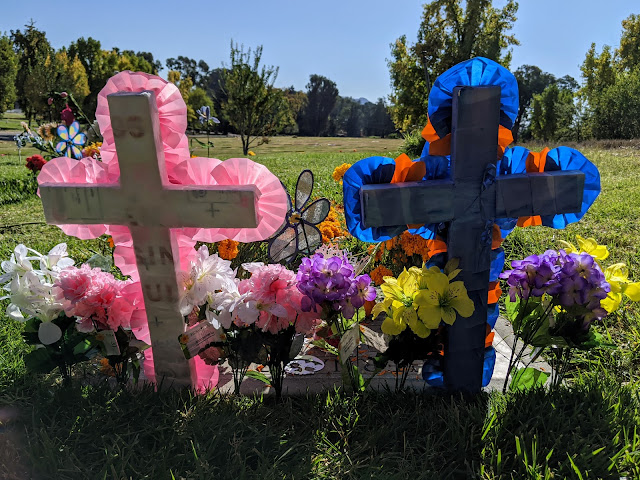 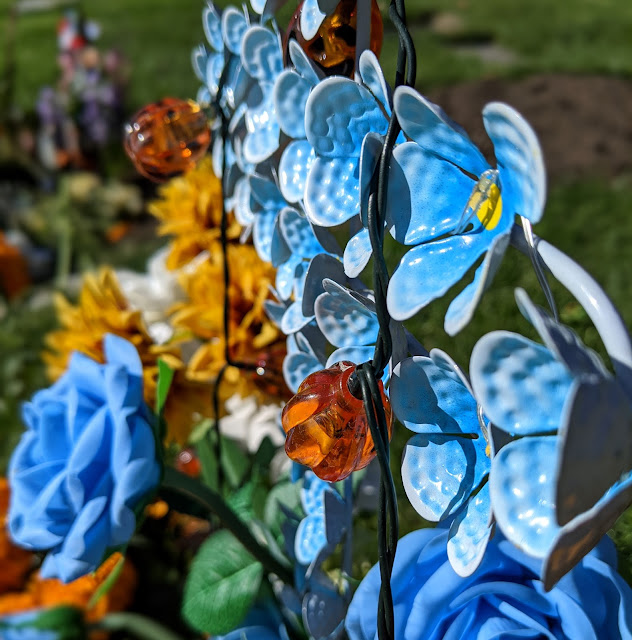 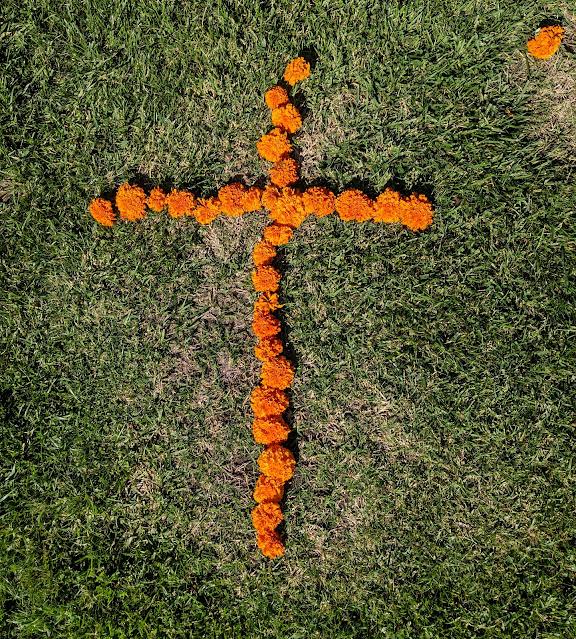 After walking along for several minutes I took out my phone and started to take pictures. I just couldn't pass this up, it was too beautiful and represents a Mexican tradition that celebrates the dead instead of mourning them. I had read a lot about the Day of the Dead and had seen pictures of Mexican cemeteries where families gathered at the gravesites to eat, dance and celebrate. I love it and thought it was so much more connected to life. 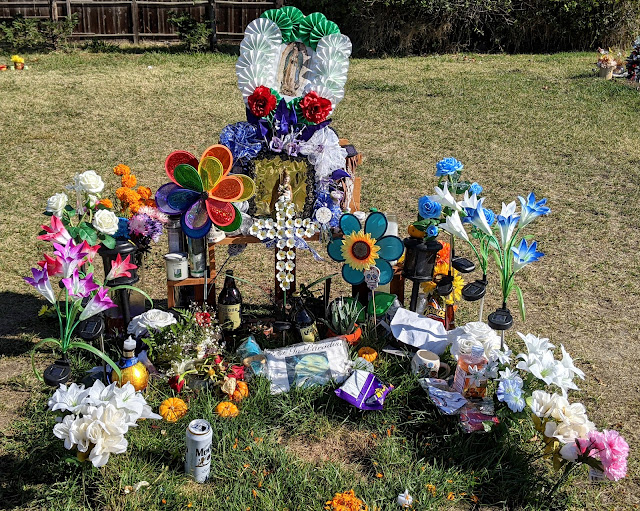 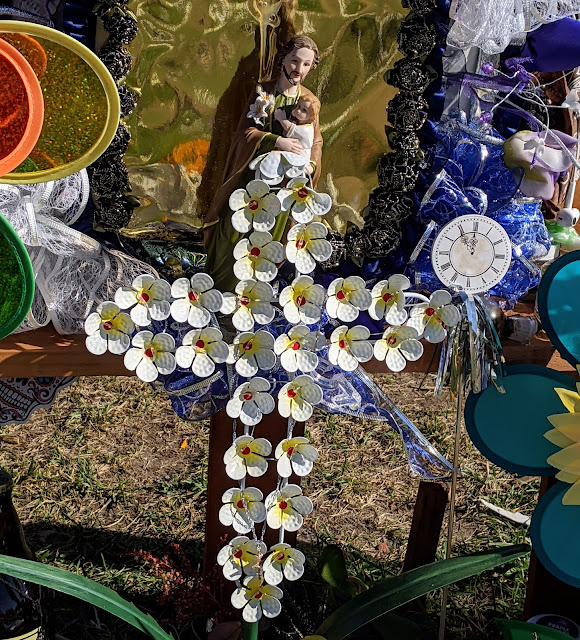 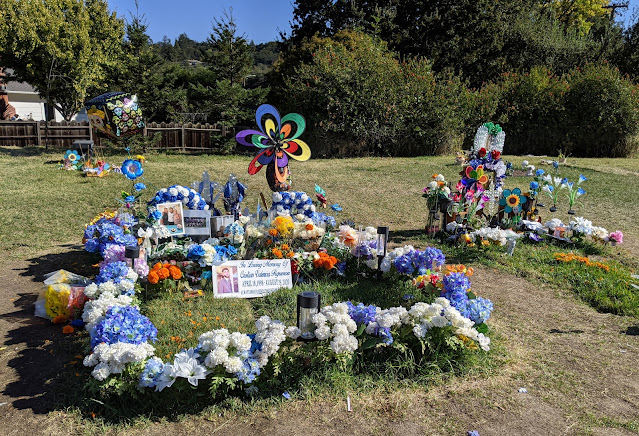 There were food and beverages on the graves, plastic flowers, toys, figurines, crosses... it seems that everything goes, whatever the person who had passed did love and cherish in his or her life. What a wonderful and thoughtful way to remember a loved one. 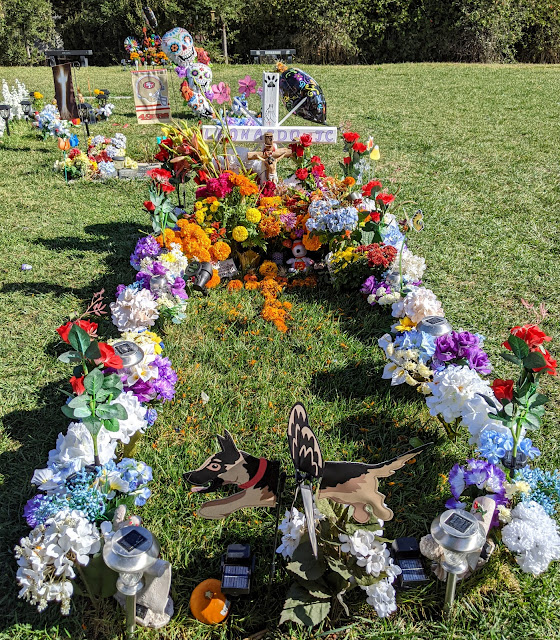 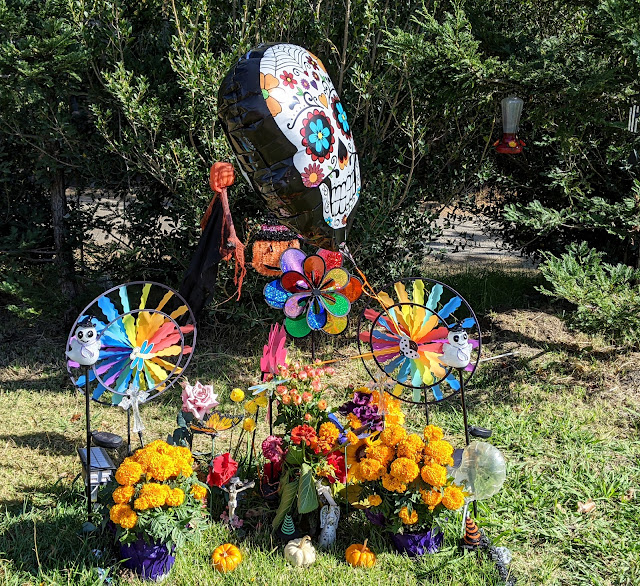 I know that I will go here again next year at the beginning of November. 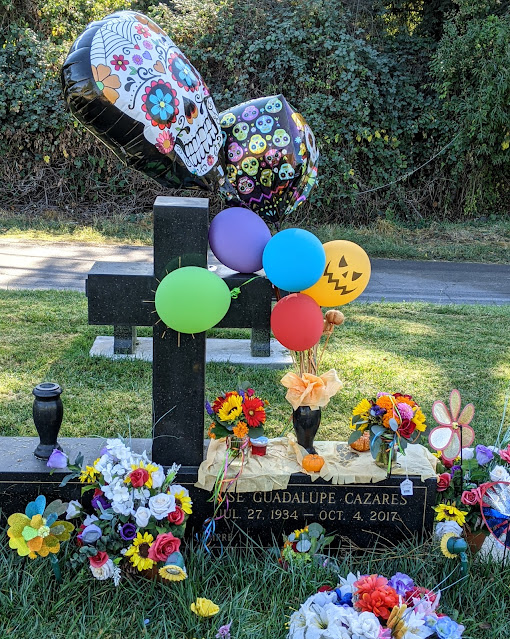 We received the good news on Saturday morning and I had the feeling that a huge sigh of relief was traveling around the world. I heard that the church bells were ringing in my native Germany. We sure felt relieved and quite happy. Now we have to do the hard work of healing this nation.
Posted by Carola Bartz at 8:46 PM

The Day of the Dead is largely not commemorated here - which I mourn. It strikes me as a wonderful way to celebrate the life of loved ones.
I most definitely heaved a huge sigh of relief when the election results were out. Biden and Harris have a HUGE job ahead of them, but their election gives your country (and the world) hope. Hope which is most desperately needed.

No, you couldn't pass this up. The photos are great. We don't see much Day of the Dead here. I like what you shared. It's a beautiful tradition.

I love this post. The Day of the Dead is a wonderful way to remember loved ones who have passed. These graves are so colorful and I love that.

This was the first time I had seen graves so gaily decorated, Carola, although I have seen flowers and small items left by headstones in cemeteries I’ve walked through. Thanks for sharing.

We live near San Diego and see glorious colors like these.

These are interesting to see.We don't have cemeteries decorated like that here and they are really beautiful to see.