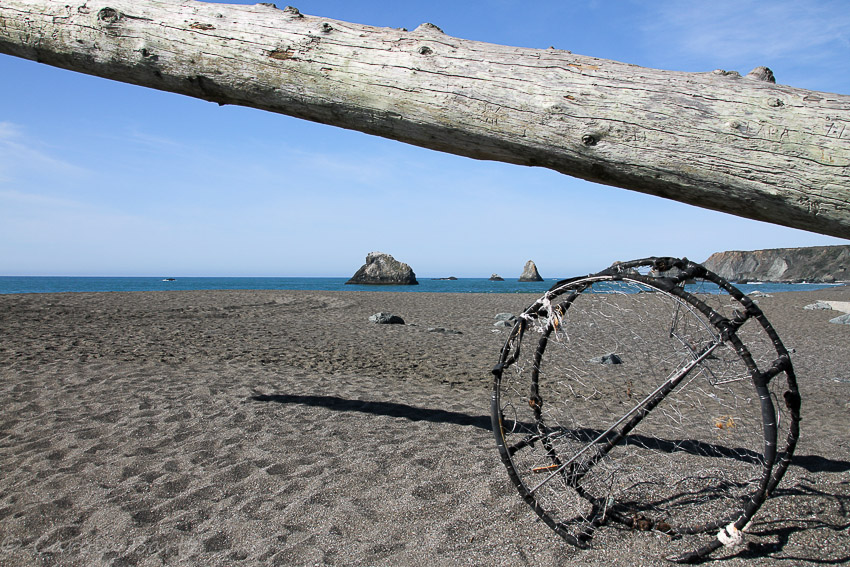 When I recently walked along the mostly deserted beach I came upon a crab cage or crab pot that was standing upright beneath a huge piece of driftwood. I first saw it from further away and couldn't quite make out what it actually was, but it became clear when I approached it. It must have been deposited here during a very high tide. Of course I took a closer look and put my camera to use. 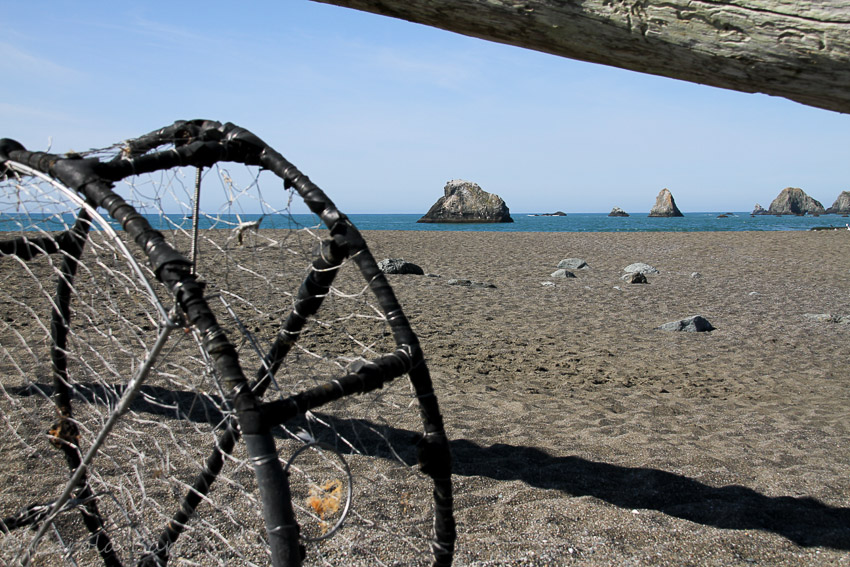 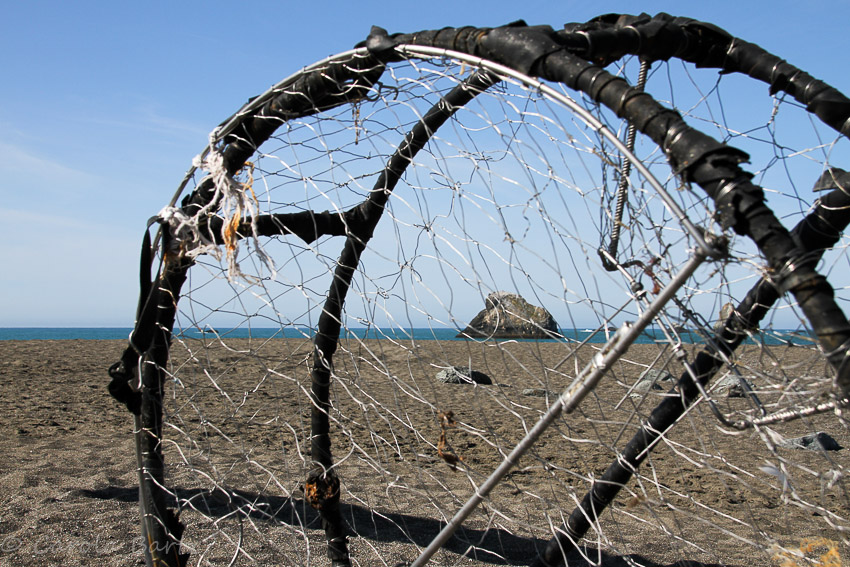 Here on the West Coast crab cages are mainly used for catching Dungeness crab, both commerically and recreationally. Dungeness crab season starts on November 2nd, but over the past two years it had been delayed because of too few or too small crabs. The last full season we had was in 2017-2018. This season only started in December, a whole month late, and most of the commercial fishermen have already stopped since there were fewer crabs. There are still some very hardy fishermen who hold on and will try to catch crab until April. It's a hard way to make a living. 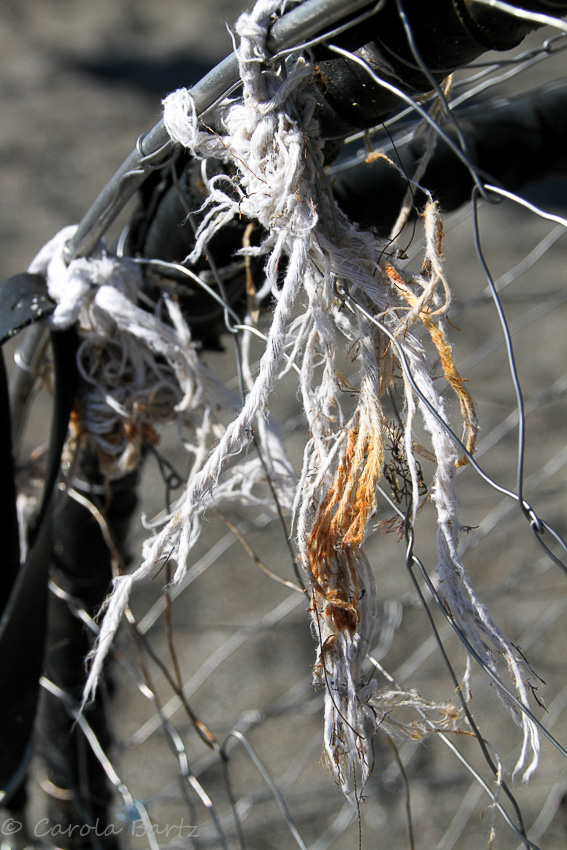 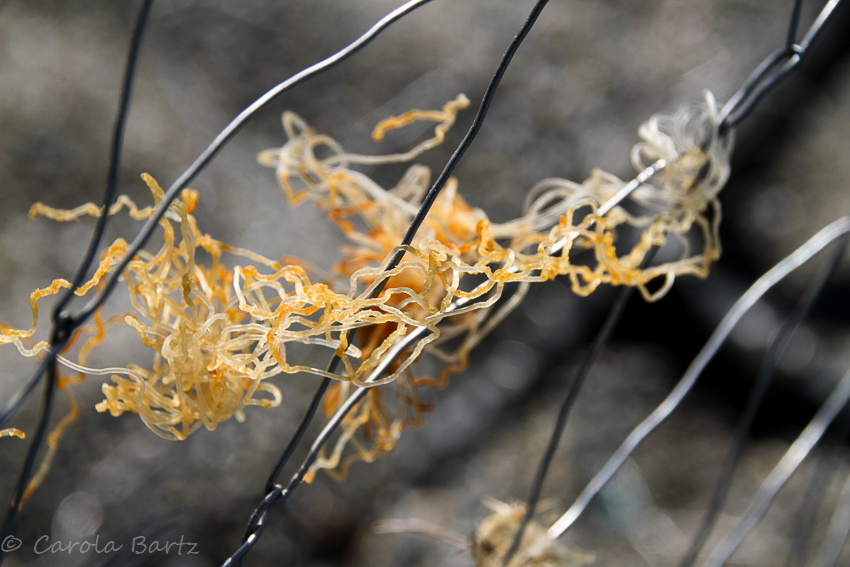 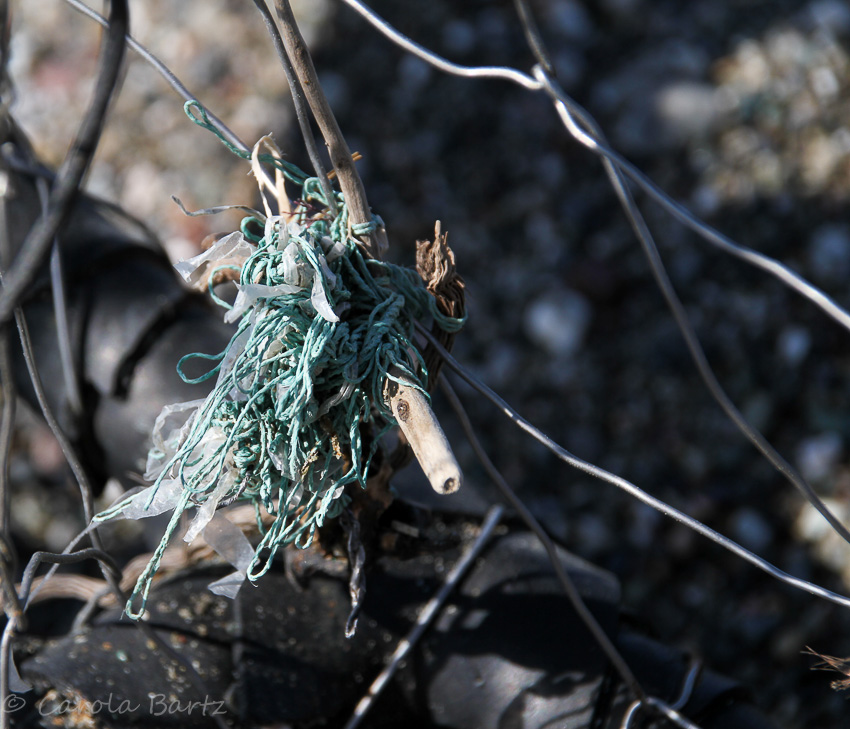 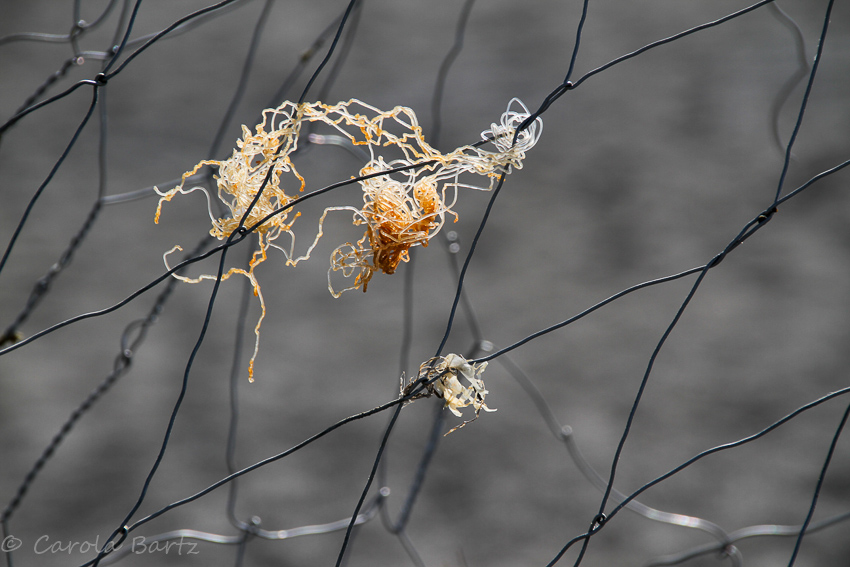 Crab of course is the main food at a crab feed of which we used to have quite a lot all over the county in the first few months of the year. Crab feeds are fundraisers, and we once were invited by our neighbors in our old neighborhood to join them. It was a lot of fun, albeit a bit messy. 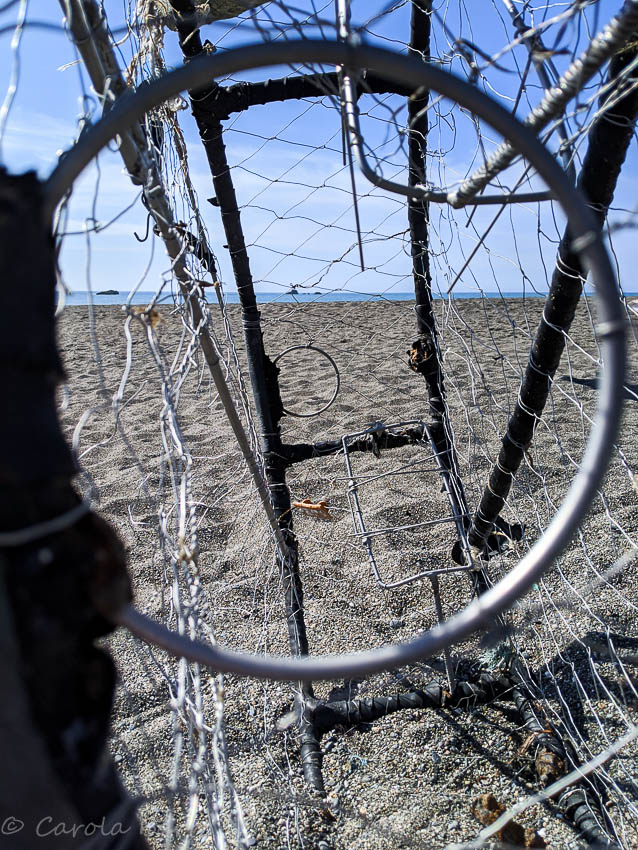 Then I remembered that I had my lensball with me - I had fun playing around with it. 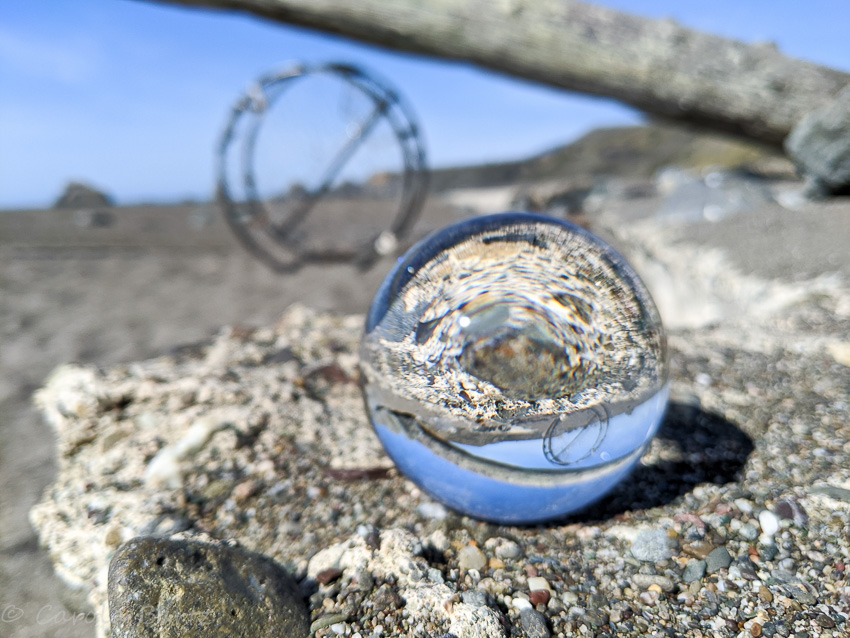 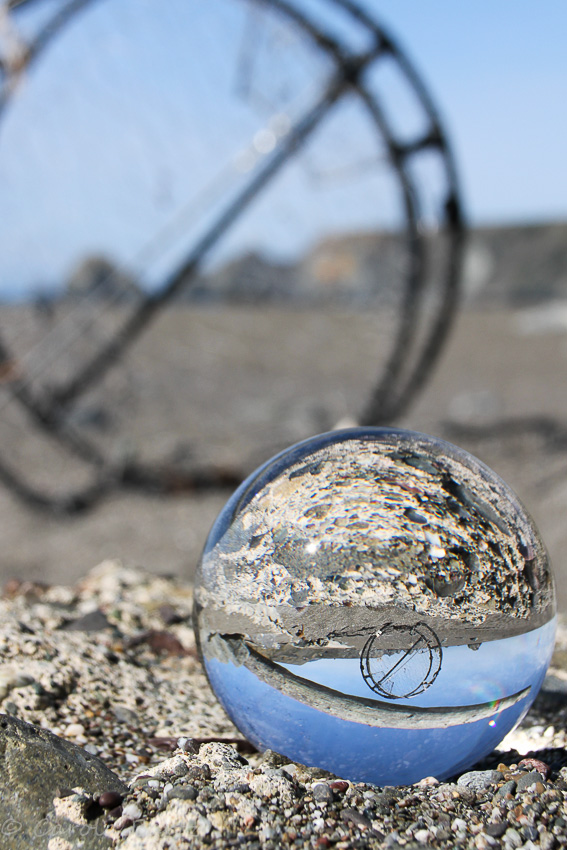 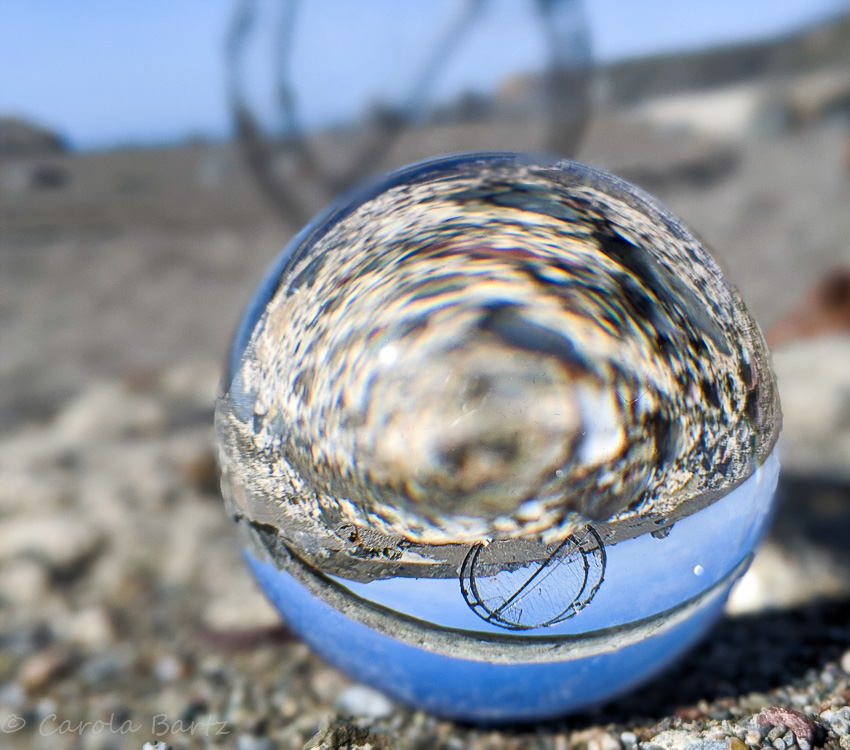 I wonder whether the crab cage will still be there when I go to the beach the next time. 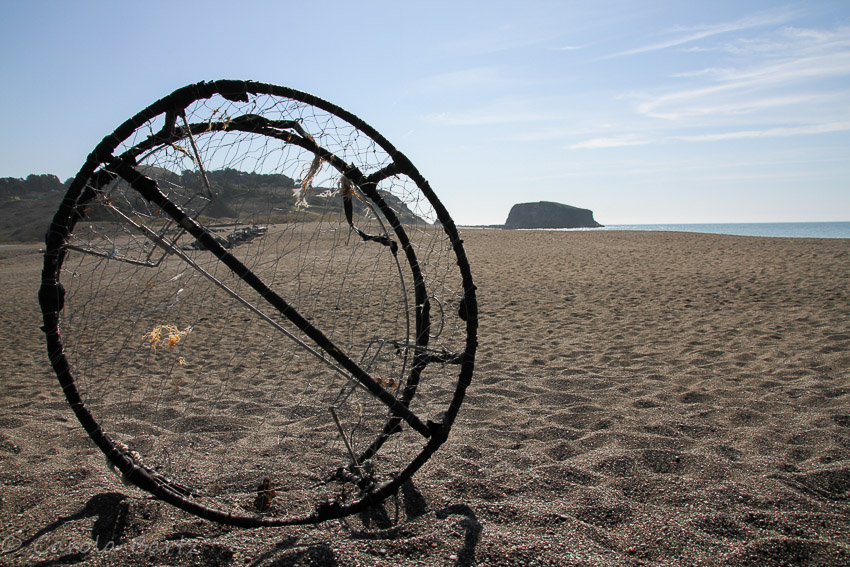 I really liked this post. The crab cage is simple, elegant, beautiful (and I must look for a lens ball).
Crabbing is indeed a hard life for the fishers (though not as hard as it is on the crabs). I am so pleased that it was put on hold to allow the crab numbers to recover. How I wish that sensible restraint was more common.

I am quite sure that I would not have been able to identify this item, although perhaps if you live close by the coast it is a familiar object. Sadly, like so many other sea creatures, we have doubtless over- harvested the crab. I once had crab cakes in Maryland, the best I have ever had anywhere, but that was many years ago.

I have never seen a crab cage, before. In New England, we have lots of lobster traps - probably the same idea, but they look very different. I really love the way you took photos from so many angles and perspectives, and the closeups with the threads hanging are very interesting!

Great photos, I would love to live near the beach!

This entire post is a TREASURE, Carola! Each and every image is brilliant, all centered on this unexpected TREASURE you found.

I like the lonely feeling of these shots. Nicely done

Did enjoy seeing all of your photographs.

If I had seen this, I wouldn't have had a clue what it was. Your photos as always are just beautiful.

I am following, greetings from Poland ☺

That sure looks like a wonderful, quiet stretch of beach and really nice photos ... I especially love those close ups.

Great macros! Plus I learned a little something. Thanks for sharing.

That is a nice find by you of the crab pot. I like the lens ball photos too.