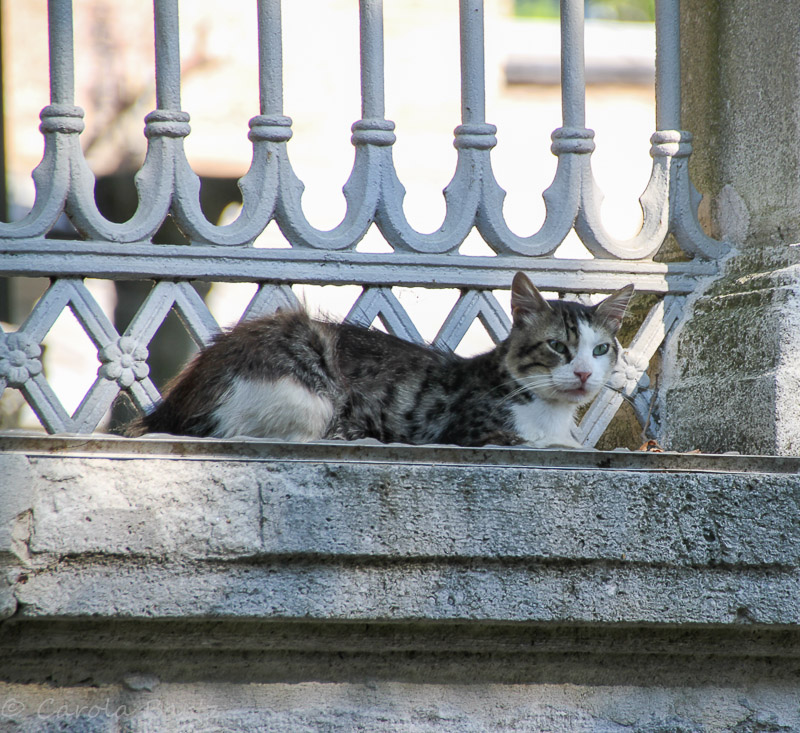 Istanbul is the city of cats - there are cats everywhere. Yes, they are stray cats, but everybody seem to love them. They are well fed, look good (most of them anyway) and as typical cats ignore all the people around them (except when they offer food to them). They're certainly not hop-on-your-lap-and-pet-me cats, but even though the city population loves them. 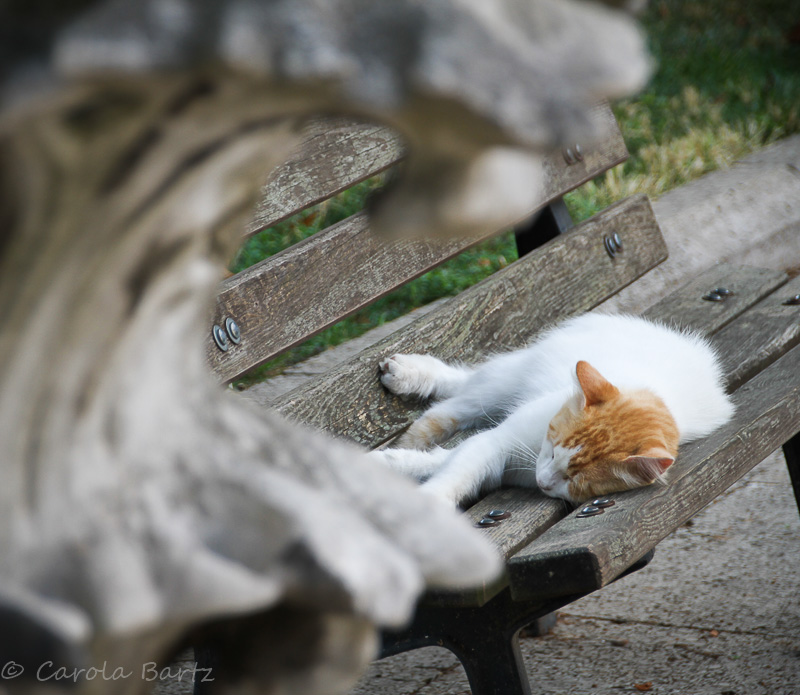 The Hagia Sophia is a popular hang-out spot; while I didn't see any cats in the Blue Mosque I have seen many photos of cats there and am convinced that they like to go there as well. Lots of shady spots during the hot sunny days.

We had so much fun watching this cat while we were sitting in our favorite street café, enjoying some ice coffee. This cat took interest in this moped, first hopped on it, inspected it until it jumped up onto the seat, trying its claws on it and finally settled down. It stayed there until the owner of the moped claimed it which the cat thought was rather impertinent. The moped driver was very gentle and kind with her. 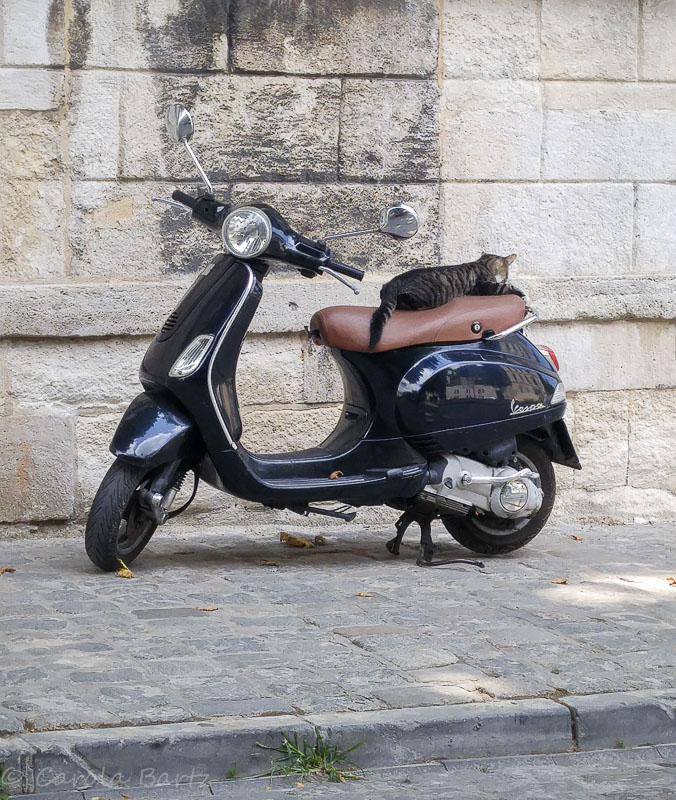 A few days later when we were at the same café a cat (perhaps the same one?) was lying in the street, taking a nap. It wouldn't move and people would just drive around it - this is something we noticed all the time: drivers stop for cats and dogs or maneuver around them. I liked that. 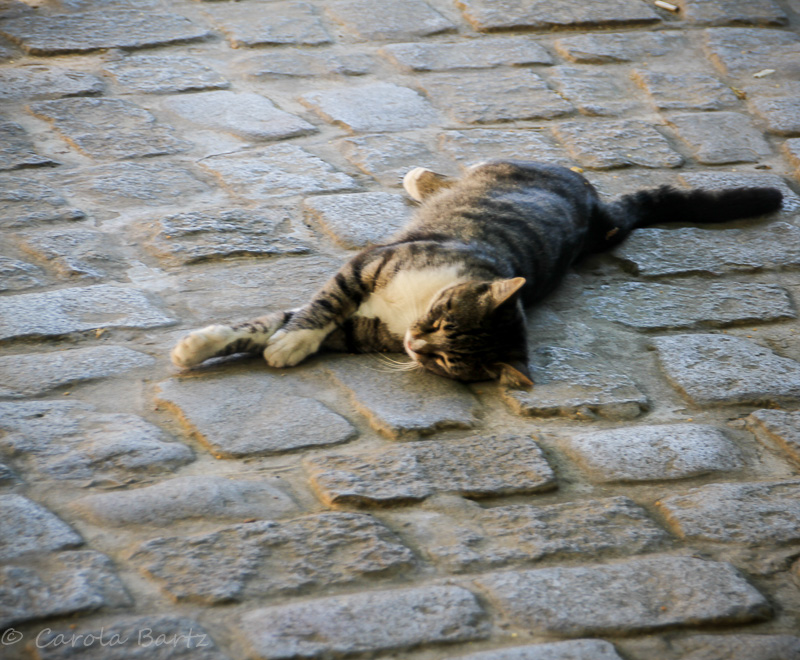 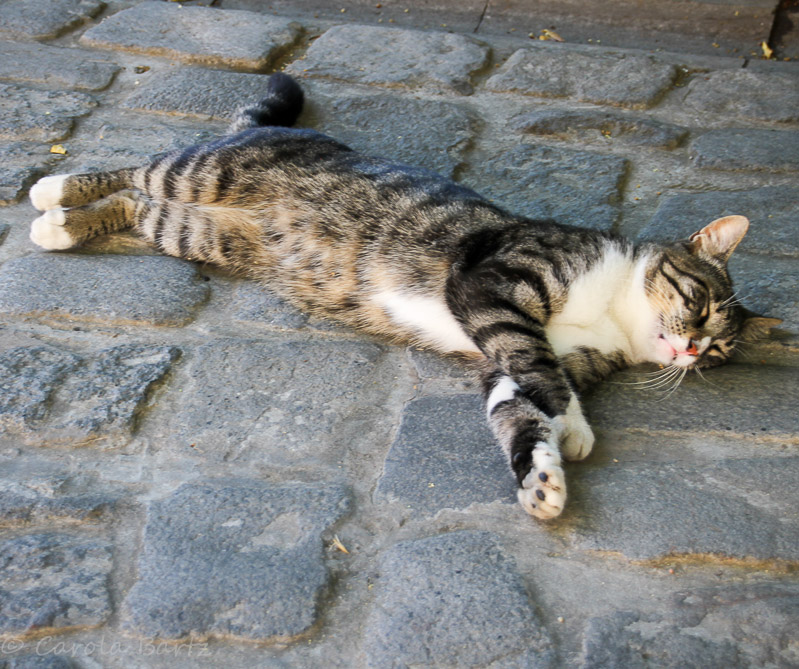 Wherever we went we would find little piles of dried cat food, water bowls on a sidewalk. Some restaurants collect tips to pay for veterinary bills. It was heart warming to see how well these animals are looked after and how much they are loved.

There are also a lot of stray dogs that are just as well looked after and loved. And the really interesting thing was that we never saw any dog poop! (On a side note, we saw very little trash in the city anyway. Istanbul is a very clean city.) 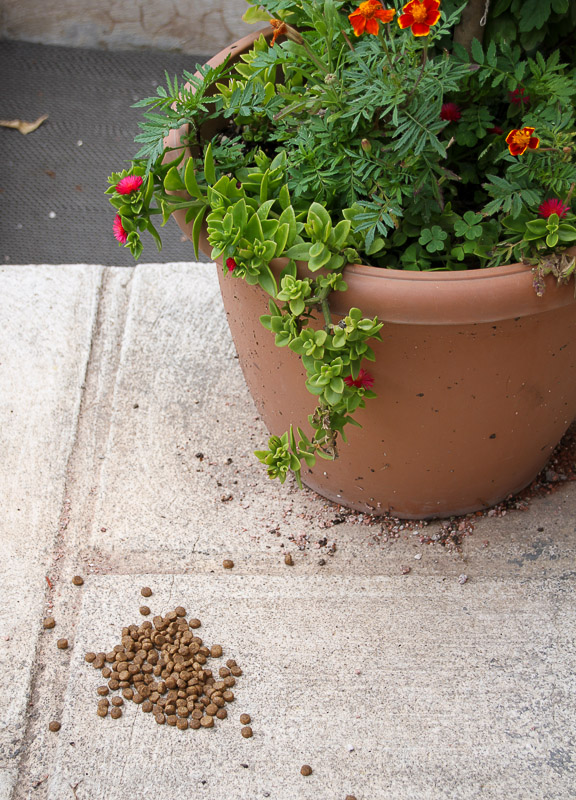 The cats are simply everywhere - this one was taking a nap right in front of a shop window in the Arasta Bazaar. 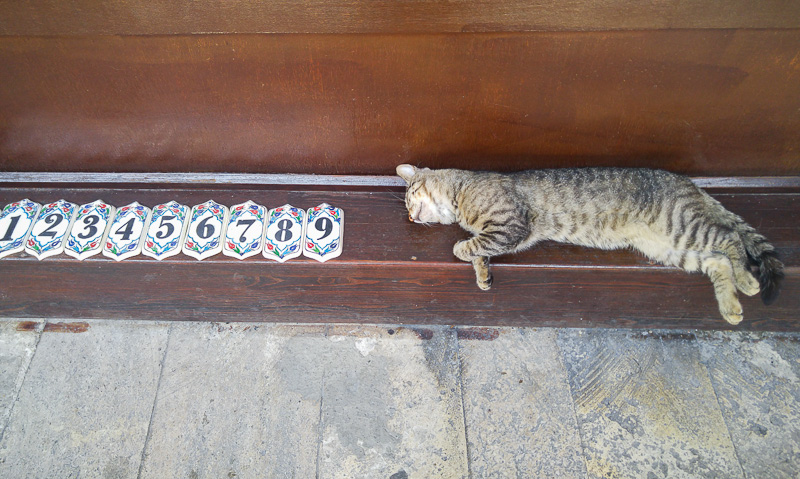 They sit on the ticket counter in the train station... 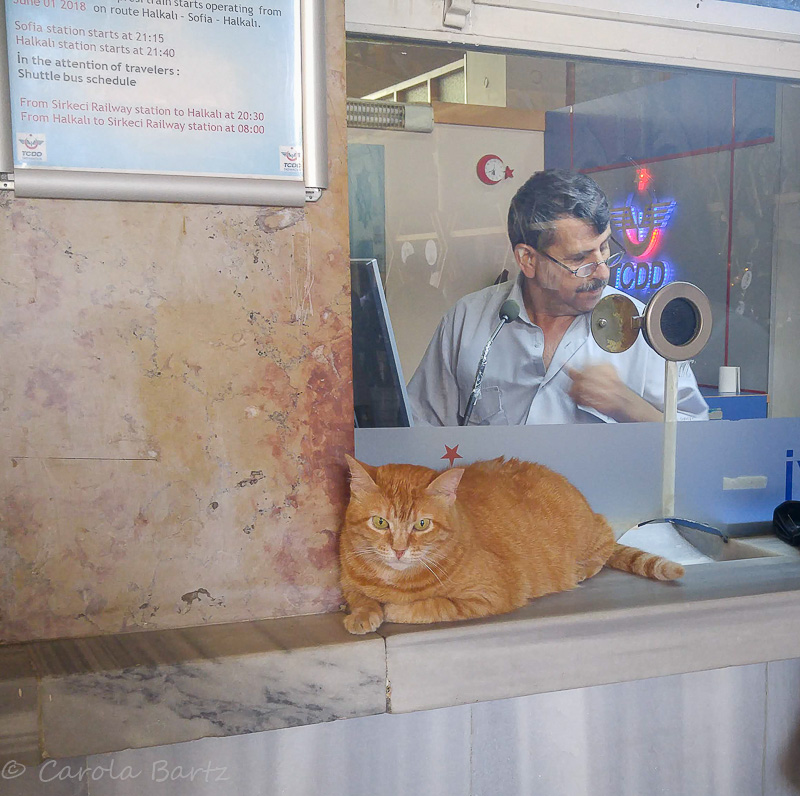 ... and hang out in the gardens of mosques. 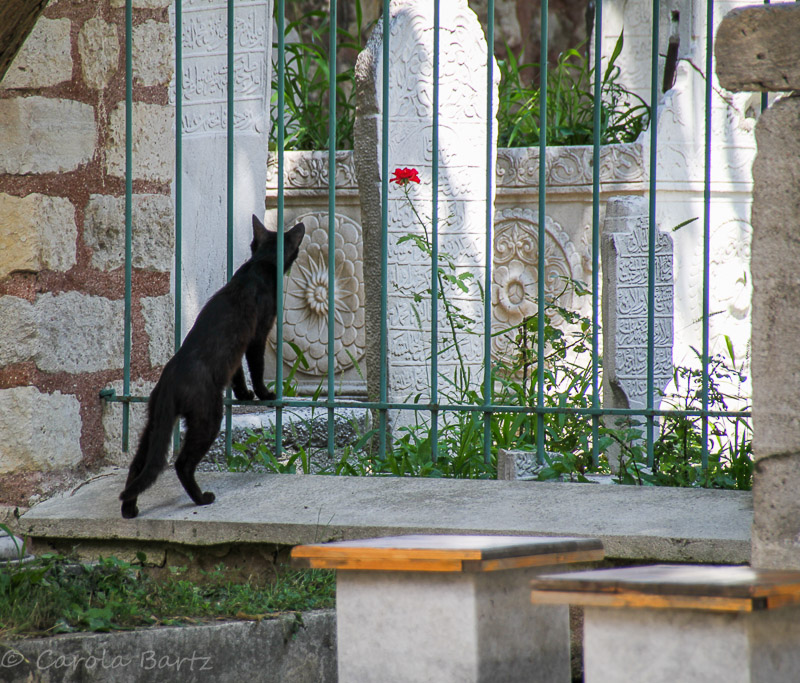 While walking the streets we saw them everywhere, especially in the quieter neighborhoods. 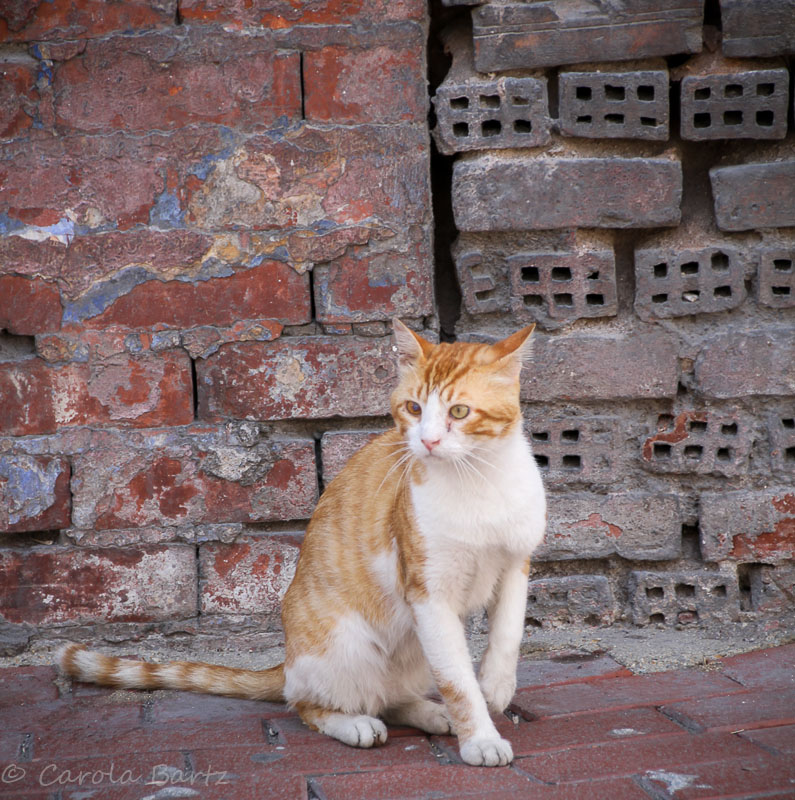 Of course they're in the parks as well. 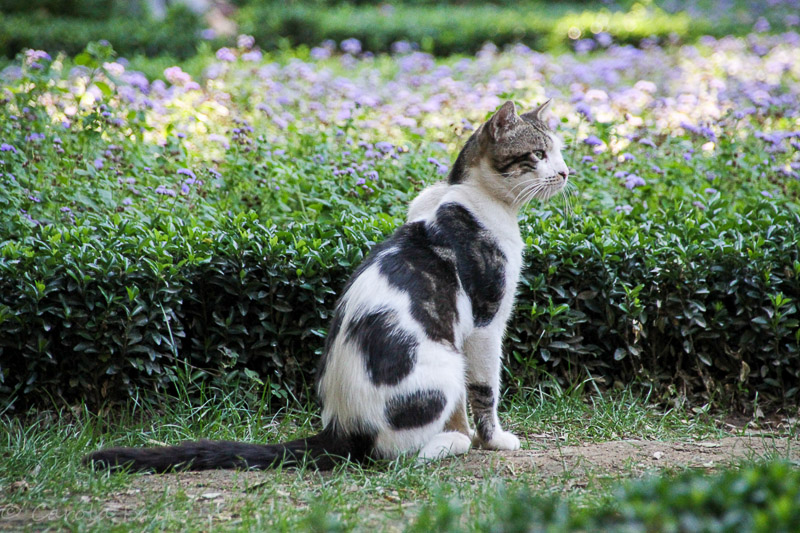 Cats have been in Istanbul forever. There even is a movie about the cats of Istanbul called "Kedi" ("cat" in Turkish) that I have yet to watch. You can find Facebook groups about them and even yours truly has a Pinterest board about the Istanbul kedisi.

That is amazing. The cats look so beautiful and cared for. It's difficult for me to imagine a city with so many stray cats. You took some wonderful photos of these pretty cats!

They are lovely and glad to hear that people love them.

Yet another reason to want to visit Istanbul.
I firmly believe that the way people treat animals is a great indication of their character.

Well a city that takes such good care of its animal population certainly captures my interest. How wonderful! And they look so healthy and well fed. Amazing.

Such cute kitties. It is fascinating how many you saw.

Cats are gods by themselves... wonderful series, thanks for sharing.
Greetings from Germany

You must have known this would be my favorite of all your travel posts. I love how they are cared for by the people, with food and vet bills. Some beautiful ones here and of course your photos are their usual perfection. Terrific captures in so many different poses. Love it to pieces!

Beautiful photos! Looks like it was a lovely place to visit!

Such a beautiful post! I love it so much! Thank you! Big Hugs!

Domestic cats descend from a wild species (Feline silvestris lybica) that was native to the Middle East, so they've always lived in Turkey, and also in the other countries of the Eastern Mediterranean. They do seem so at home in the area, it's not hard to believe they are the natives!

Your photos are very nice.

I love a community that takes care of its animals even the wild ones. If only we could be more like that.

I had no idea there were so many cats in Istanbul. I love that the people watch out for them. Great photos.

Your Photography is stunning and I just Love how the Turks feel and Care for their Feline Friends, if only we all were that Humane in our Country!