The pattern looked complicated and of course, at the beginning I didn't "get" it, but finally I had a humble beginning. 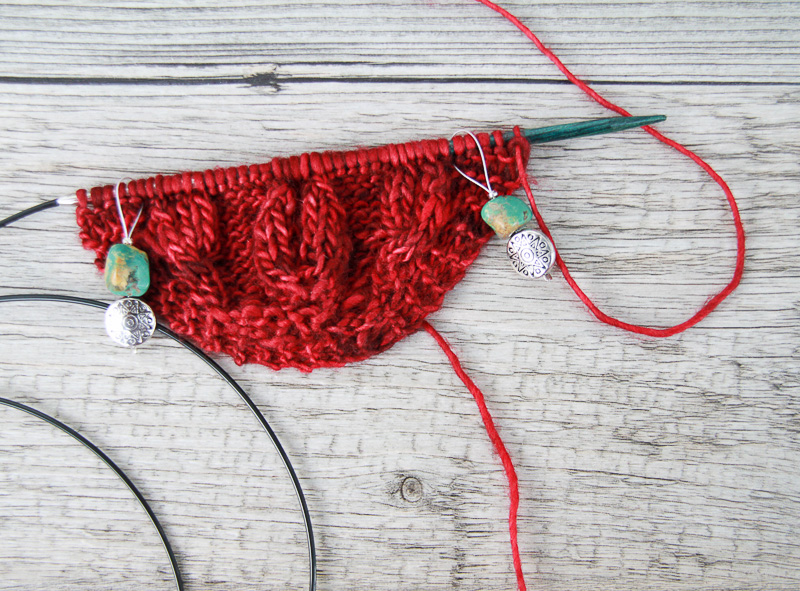 Despite making a lot of mistakes and redoing entire rows I kept on knitting and after a week it had grown considerably. 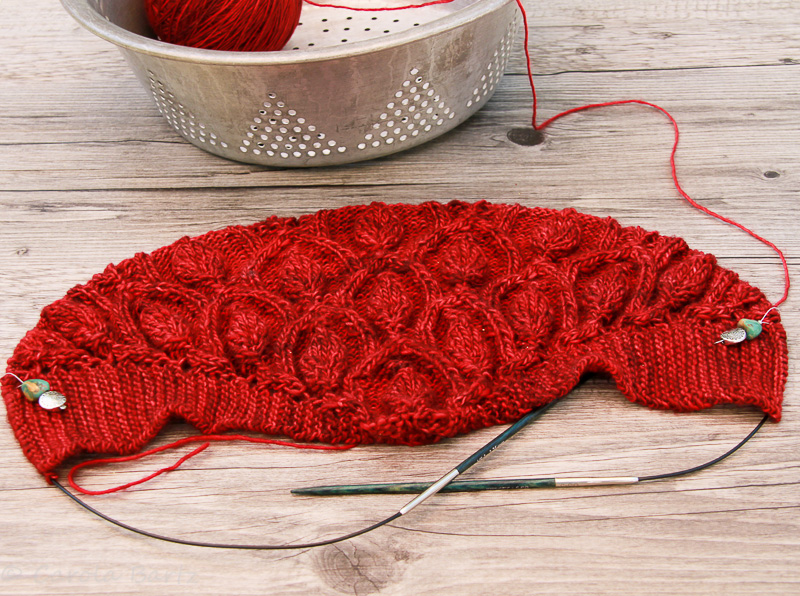 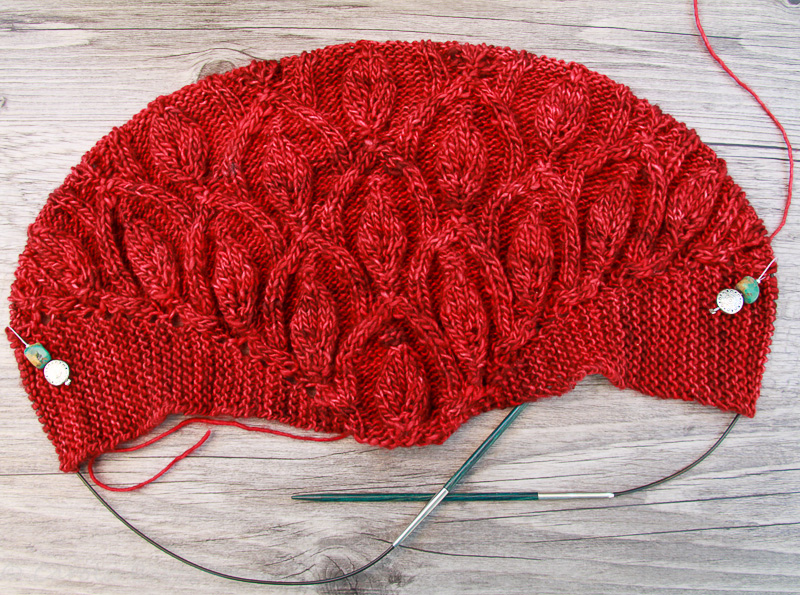 Every row in this pattern is different, and every row consists of sections - a section that is repeated several times along the row. After having done several mistakes I got into the habit of counting the stitches in each section, so I marked the beginning of a section with a piece of short yarn. When I was done with a section I simply moved the yarn forward so that I didn't lose count. 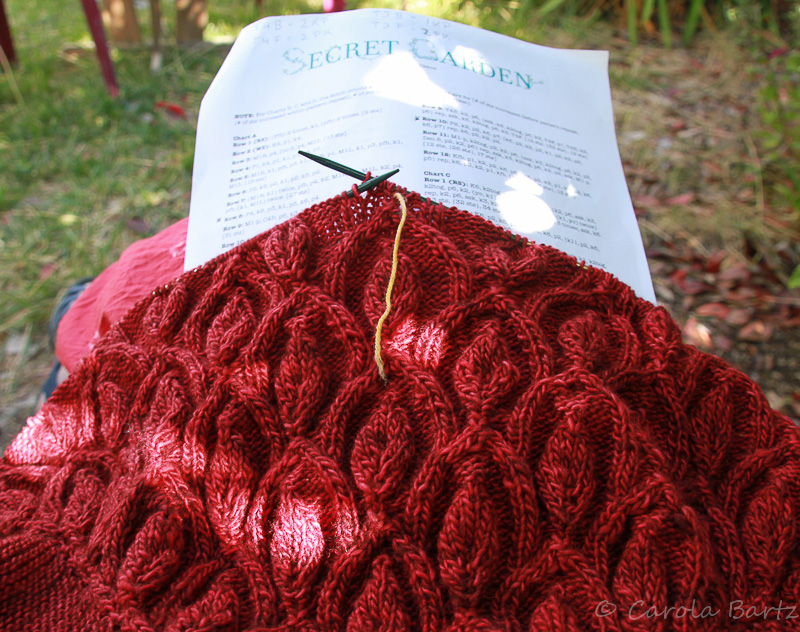 As you can see the pattern consists of a lot of cables. I first worked with a bamboo cable needle, but I didn't like it that much. Then I saw a YouTube video where a knitter used a different kind of cable needle that looked like a big hook. One of the craft/fabric stores in town had it and with this the cables were much easier and faster to knit up. 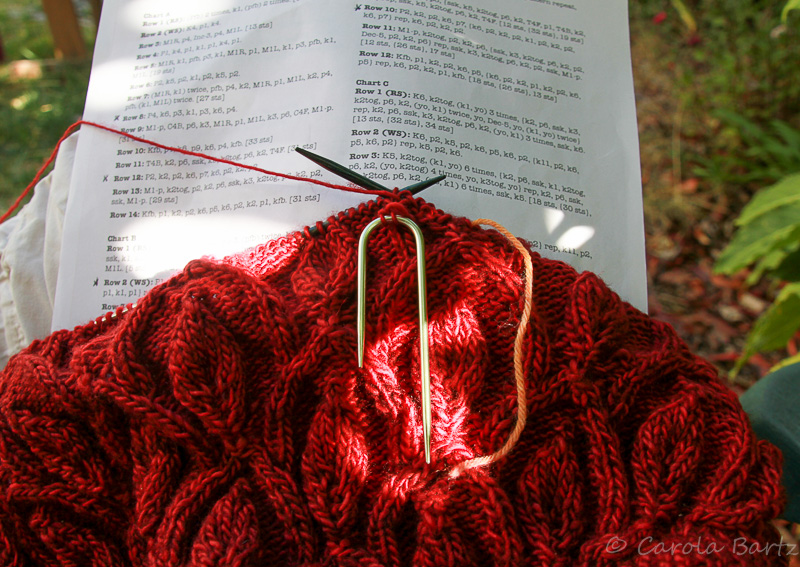 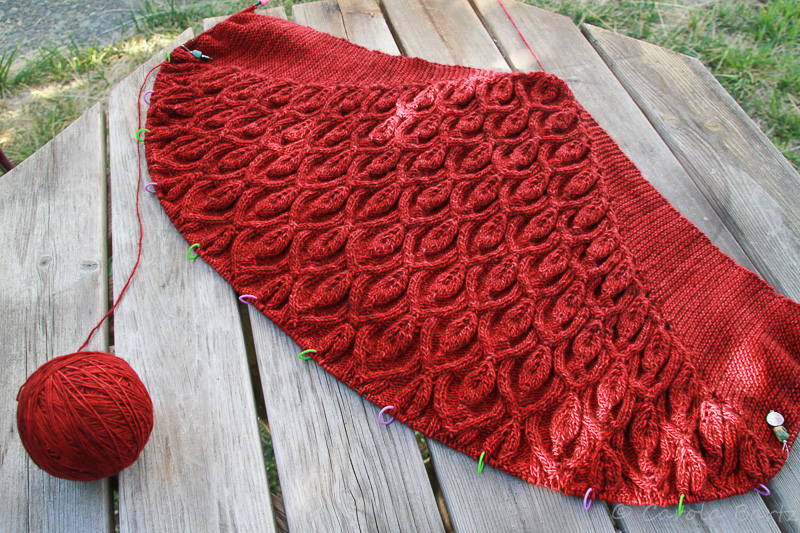 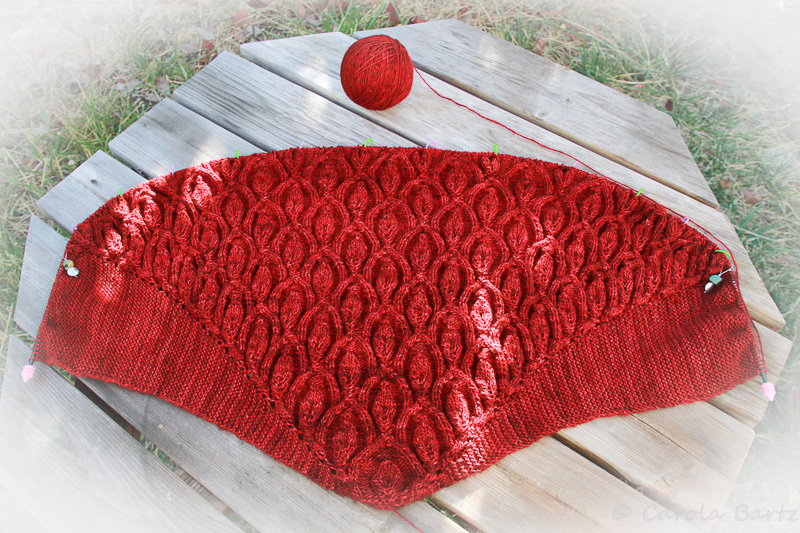 And then disaster struck! About a little more than three quarters along the row my needles broke. Suddenly I had a very short piece of the circle needle in my left hand and the rest in my right one with several stitches dropping off the needle. Holy cow!!! I was close to tears and couldn't move for a few minutes. However, I knew that somehow I had to get the stitches on whatever needle as fast as possible before they messed up the entire pattern. These were very intense moments and it's a wonder that I didn't yell at my poor husband who asked whether he could help me somehow. I just tried to focus and get those stitches back on a needle!

No, I don't have a photo of the disaster - are you kidding me?

The following day I got a new needle and settled back into knitting, one section and one row at a time. The shawl grew and grew... 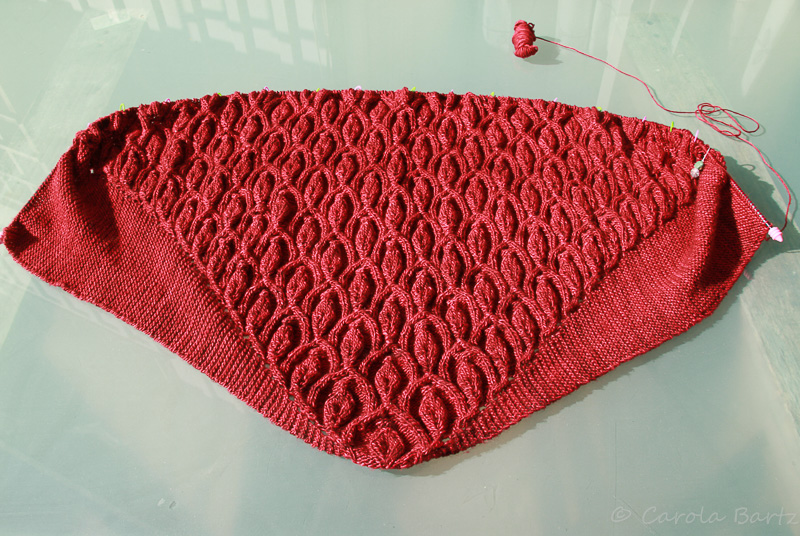 ... until the day before we flew out to Hawai'i it was done. Finished! 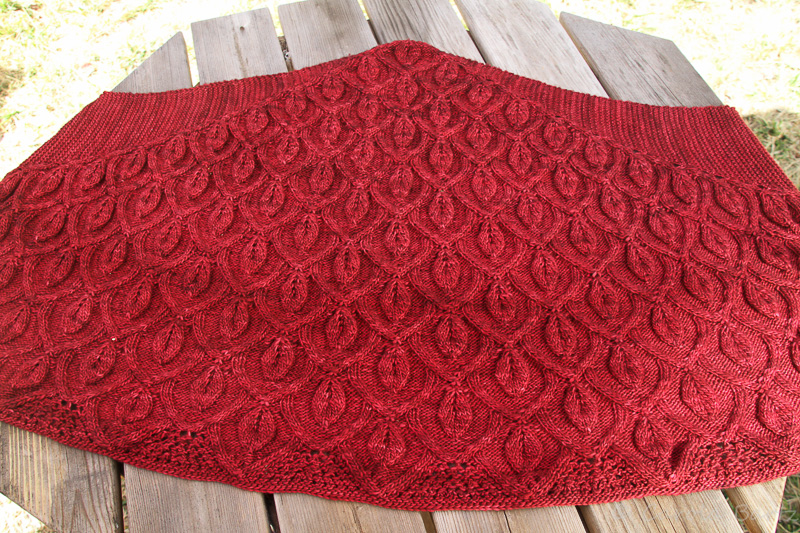 I felt wonderful when I had weaved in the last one of the threads. And a little proud as well. 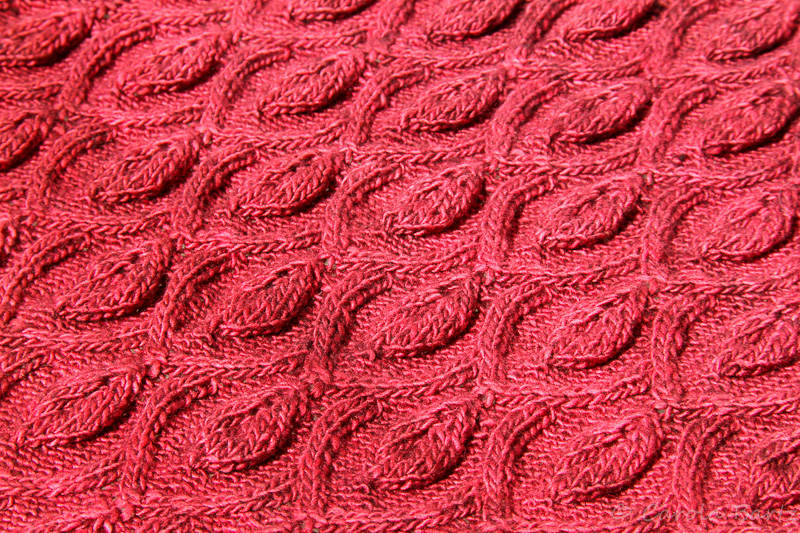 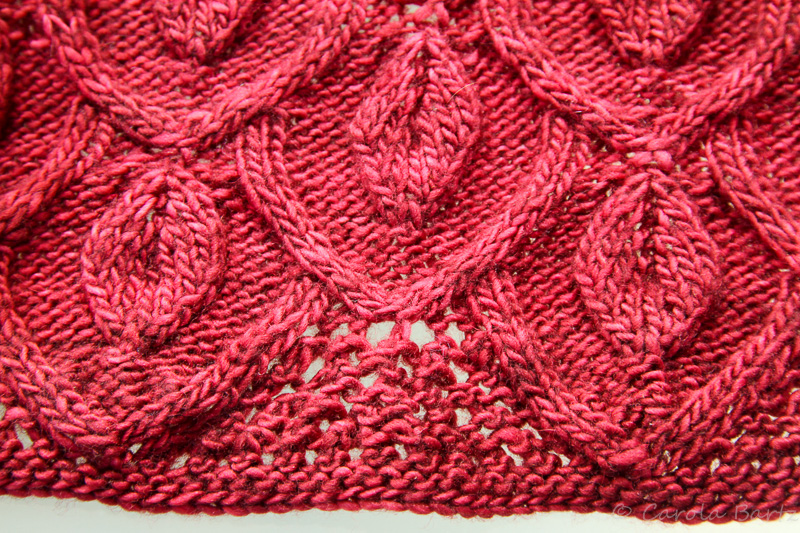 It was quite difficult to get a photo of the entire shawl in all its glory.

There was the option of making a button hole, albeit in a very odd position. It took me two months to buy a button for it and sew it on! 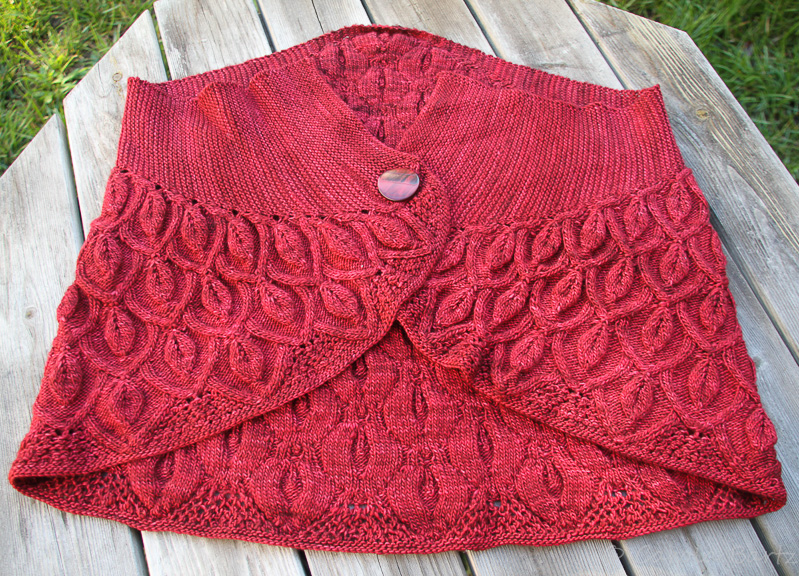 That is GORGEOUS.
Colour me awed.

Oh my goodness, you shawl is gorgeous! Love the red 'tosh yarn you used.
I love knitting. *sigh* :)

Wow! how patient you have been to overcome all the hurdles but how worthwhile. It is deliciously beautiful in such a sumptuous colour. I'm wondering if the unusual button position creates a type of collar or drape?
Thanks so much for popping in on my blog and for your lovely comment too. As if by magic, I found a clock making kit so I am going to make one of the patchwork clocks for my sewing room.
I am looking forward to my forthcoming visit to the family in Germany but first I have a trip to our own beautiful English Lake District (William Wordsworth country).
I must tell you that my DD in Germany has taken the necessary tests and passed with 100% results and now is a German citizen. She felt it necessary due to Britain leaving the EEC after the recent referendum. I am very proud of her but feel that I have lost a little part of her.

Oh my gosh - this is so intricate! I love the color. Just gorgeous, Carola!

it turned out gorgeous ..

Wow, Carola, that is gorgeous! What a lot of intricate work...you should be A LOT proud of yourself. Now, could you please show us a photo of you wearing it? I'll bet it's beautiful on you.

This is spectacular! I love the color, the pattern and most of all your commitment, especially in light of the great needle breaking incident! Bravo!

This is beautiful! Oh, how I can understand your frustration when the needle broke. With knitting and especially with a complex pattern, it is so difficult when you drop stitches. The color is fabulous and I love the design. Secret Garden, lovely.

The shawl is absolutely gorgeous - you have every right to be proud!

Gorgeous!! You should be very proud! I am so happy everything turned out right, after what happened! Hugs!

Goodness, I would never have the patience. Nor the know-how, nor the skill.
I am all admiration, the finished piece is gorgeous.
At first I couldn’t work out what a ‘shawl’ is but once you turned it over the penny dropped.

The colour is very beautiful too.

What a beautiful shawl – it truly is a work of art. The color is so warm and the shawl looks warm too. You must have been so pleased to see the beautiful results after all your patient work.
When I was still engaged to my husband I started an Aran Isle Irish sweater for him, but then with the wedding and all I let it go. I never could find the pattern or remember how I had knitted it that far – I think it still is in a box, somewhere in the garage, unfinished. In 2017 we will have been married 50 years, so you see how old that unfinished sweater is. I thought I would un-knit it and use the yarn, which is special fisherman’s yarn, but have not yet – I still have to think about it…

Fantastic! It really shows off your knitting skills. The broken needle situation had me holding my breath. So glad you got it fixed.