Where My Father Grew Up

This is the first time that I am joining Linda at Senior Adventures at her Wednesday Wit and Wisdom. The idea behind this is to share a story of a particular photo - or a poem, if we like. I had always thought this is not for me because of my inadequacy of the English language, but Linda encouraged me. She often shares a memoir with a certain photo, and I want to do something like this as well.

So let me take you to Marienburg in Poland, or Malbork as it is called today. 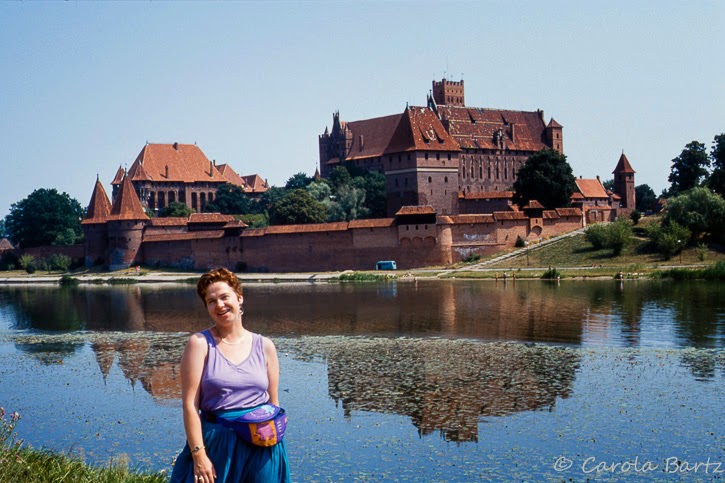 This is yours truly back in 1993. I'm standing at the river Nogat, right across from the Marienburg, or Malbork Castle. So what was I doing in Poland so shortly after the Iron Curtain came down, you may ask.

For centuries, Marienburg belonged to Germany. The castle was founded by the Teutonic Order in the 13th century and named Marienburg (Mary's castle), and so was the town's name, that grew around it. The part it is located in was called West Prussia (don't get confused by people who call this area East Prussia - it is NOT East Prussia, however, most people are unaware of this fact). The castle is the largest castle in the world by surface area.

This town is the place where my Dad was born and raised. His memories of his life here are stories of an innocent, blissful childhood, spent in the woods, on tiny islands in the river. It's hot in the summer and bitterly cold in the winter. Every winter this river would completely freeze over, and my Dad and his friends would ice skate every afternoon until it was time to go home. In the summer, he would row. He was in a rowing club and they did their training here. There was an island somewhere in this river where the boys (and perhaps some girls as well?) would go to, spending long summer afternoons fishing, swimming, and just hanging out. It was a small town, and since my Dad and his siblings were the children of the only veterinarian in town everybody knew them. His Dad - my Grandpa whom I adored when I was a little girl - was one of the first people here who owned a car. As the only veterinarian in the area he needed it to get out to the farms. It became my grandparents' and aunt's survival ticket in the last months of World War II when the town was already burning, the Soviet army was closing in and they had to make their way to Danzig (Gdansk) to board the last refugee ship out of the port of Danzig to Denmark.

My Dad had to join the German military when he was hardly 18 years old. He went to the navy, serving on the Scharnhorst and doing a tour on a submarine. At the end of the war he became a POW with the British and was released in 1946. He never saw his childhood home again. Marienburg became part of Poland. His childhood home was lost to him for ever.

When Eastern Europe broke apart in the early 90's and traveling into these countries became so much easier, I wanted to see where my Dad grew up. I wish he would have come with me, but he didn't want to see the modern Marienburg. He wanted to keep his memories of a childhood that died with the end of the war.

Carola, so happy that you shared your story, although so sad for your dad's and his service in the War. What a beautiful castle, and it looks so serene compared to the destruction that took place in so many other areas. You did a fabulous job of telling the story. Come back to share again!

Carola, thank you for sharing the photo and the story. I am sure you have some closure by being able to visit the place where your father lived. It's a wonderful, historically affected story. I long to visit the place in England from which my family emigrated in the 1920s.

This was a truly lovely memoir, Carola! What a wonderful childhood he must have had, and I can understand his desire to remember it that way. When I return to the town I grew up in over fifty years ago, it is much changed, sad and run down. I prefer to remember it as a place of childhood innocence. The photograph you shared is beautiful, and I am certain your father enjoyed that and seeing you there in a place he knew so well! Nice writing!

Hi Carola, I enjoyed your story about Marienburg and your dad’s early life there. By the way, no worries about your English … it is quite good! Now I am curious about where your dad lived after 1946. I wonder if he stayed in Europe or came to America. I would enjoy seeing the Malbork Castle … amazing that it is the largest in the world by surface area!

Wow, thank you for sharing such a delightfully interesting story, and the supporting photo with it! Bravo.

wow. an idyllic childhood ruined by war. so glad your grandparents were able to escape.

Thank you.
Such an emotion-filled piece.
My father too would never/could never? go back. I hope his memories were as positive as your father's.

What a lovely picture of you and the great castle. It must be quite large if it is the largest (I am thinking of Versailles now which is also pretty big.) Can the castle be visited and did you? It is sad that your father could not go back there but he did have his wonderful memories. My father also could not go back where he spent his childhood and had to leave for his own safety but I know he would have liked to go back to Istanbul, Turkey (he was Armenian.) You told your story very well and I hope that you will tell us more.

This is a beautifully written story of your father's hometown. I enjoyed reading about his life as a child and youth and I think I can understand his reasoning for not wanting to return to a 'different' town today.

So interesting! Thank you for sharing your father's story! Beautiful photo ;o)