Every 15 minutes someone in the is injured or killed in an alcohol-related incident. “Every 15 Minutes” also is a nationwide program that takes a pro-active step in educating high school students about making mature decisions when alcoholic beverages are involved.

In October Kaefer's high school was hosting this two day event. “Emotional” cannot even remotely describe this event – it was moving, heartbreaking, intense, powerful, and – hopefully – had a high impact on the participating students as well as the teenage audience (and the parents who were present). 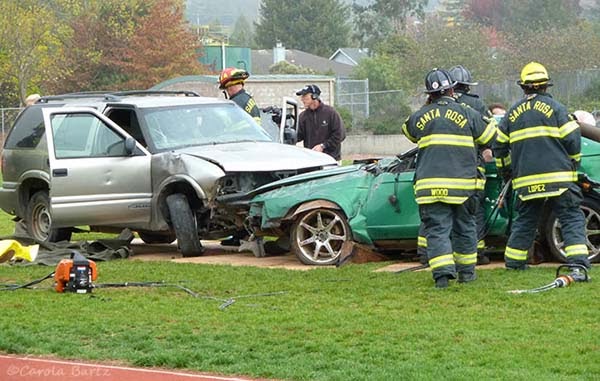 On the first day a car crash simulation was held. Police, fire and ambulance responded to this emergency as they would to an actual crash. Five students were involved – one was pronounced dead at the scene, three died on the way to or in the hospital, and the (uninjured) drunk driver was given a field sobriety test, arrested and brought to jail, where he was taken before a judge for sentencing. The parents of these five students were notified by police (including the law enforcement chaplain) that their children were killed or arrested (of course these parents knew about it beforehand). In addition, every 15 minutes throughout the school day, another participating high school student’s obituary was read, detailing the alcohol involved incidents that caused his or her death.

On the second day, a “memorial” was held. A video of the previous day’s events was shown were we saw what happened at the hospital and in jail. There were speeches, the most memorable one by the undertaker who talked about what happens afterwards, what the consequences for the families left behind look like. I will never forget his image of “the empty chair at the dining table” that holds all the horrors in its simplicity. Letters the “dead” students had written were read. Most heartbreaking was the letter of a mother.

Yes, it wasn’t real – but it felt frighteningly real. I have never seen 1600 teenager being so quiet. A few seats down from me sat a senior boy who was openly weeping. Many of the teenagers (and all of the parents) cried. Tissue boxes were handed from one person to the next. It was moving and immensely powerful.

Did it have an impact? I have high hopes that all the students who actively participated will never be involved in drunk driving, and so I hope as well for all the other teenagers who witnessed this event.

You can read more about the “Every 15 Minutes” program here, and if you’re interested to see the program in action, there is a very good video from here.

Email ThisBlogThis!Share to TwitterShare to FacebookShare to Pinterest
Labels: Vision and Verb

That's bad that there are so many people dead or injured because someone car rides with alcohol.
Greetings, RW & SK

My son's high school has this presentation every two years. I am glad they do as it certainly will make young kids think twice before drinking and driving.

Wow! This sounds like a VERY POTENT lesson, and one that everyone will remember.

If that is what it takes then all teenagers need this! I might just send a link to the website to our MP. Thanks for sharing this Carola. Meg has read it too, and is going to mention it at School council meeting

As you already know by now, I think this is an absolute "must" for high schools these days, Carola. I hope it catches on everywhere across the country!

This sounds incredibly powerful. I am passionate about educating drivers not to drink. There is nothing more selfish and irresponsible in my opinion but so few people seem to give it much thought, assuming they will be lucky or can "handle" their alcohol and not get into trouble. I've attended funerals caused by drunk drivers and seen first hand the devastation. I hope this program reaches the students and makes them think. I'm already starting talking to my 3 year old about peer pressure and not drinking. Hopefully if I stress it enough it will sink in over the years. Or so I am praying!